There are significant losses which have  occurred in crops due to the infestation of plant parasitic nematode which are known as hidden enemy due to their presence in rhizosphere and their infection site on the roots. Synthetic nematicidal control is an effective strategy to combat this biotic stress but an inappropriate and deficient application of chemical pesticides have an adverse effect on soil micro-flora and fauna. Due to the environmental and regulatory pressure, use of potential biocontrol agents is the new approach for nematode management by the farming community. For this study, four potential rhizobacteria from different habitats BHU1, BHU2, BHU3 and BHU4 were assessed for their antagonistic activities against Meloidogyne incognita infecting tomato plant. These were characterized on the basis of their morphological and biochemical activities. In vitro screening of bacterial isolates was conducted in a 25-microwell plate by addition of second stage juvenile (J2) of M. incognita with nematode application.

Among four bacteria,, three potential antagonistic bacteria were able to kill nematode within 24 hours. Mortality percentage of J2 M. incognita observed in sterile distilled water selected bacterial isolates ranged from 23.33 to 100% in 3h to 24h periods. Moreover, all bacterial isolates except BHU2 isolate were found positive for production of extracellular enzymes like catalase, oxidase, chitinase, amylase and gelatinase which favour effective biopesticide activity of bacteria. Further selected isolates of bacteria associated with tomato have shown a great potential as biocontrol agents against root-knot nematode in tomato during pot experiment. Based on the fact stated above, the current research focused on plant growth promoting rhizobacteria based nematodes biocontrol strategies with direct and indirect mechanism of PGPR for nematode management.

incognita penetrate epidermis of root and produced several hydrolytic enzymes from stylet that degrade cell wall of plant root in order to enter through plant and not only caused diseases but also restricted water and minerals uptake of plants, due to hindering biochemical, physiological and morphological status of plants. Farmers recognized insect pests and other constraints as production problems but overlooked plant parasitic nematodes due to its indirect effect on the plants. Nematode diseases are difficult to control when it enter in the root system hence pre adaptive measures are more successful to control them rather than post adaptive management practices. Plant parasitic nematodes not only cause damage individually but form disease-complexes with other microorganism and increased the crop losses (Etesami and Adl 2020).

Tomato is one of the most susceptible vegetables against root knots, nematodes  mostly causing 30 to 40 % yield losses in tropical regions, and also  it has been also found that M. incognita is responsible in deteriorating the quality of fruit and yield of tomatoes, (El-Shawadfy 2021). Among the various microorganisms, plant growth promoting rhizobacteria have attracted considerable attention for their usefulness in biofertilizer and biological control ability.

Hence  the current research work  was focused  on their biofertilizer ability as well as  on  the eco-friendly management of M. incognita by plant growth promoting traits for enhancing plant defense mechanism of tomato seedlings, raised under nematode infested soil  as previously reported by El-Ashry et al. (2020) and  Zao et al. (2021).

Qualitative assay of phosphate solubilizing activity of bacteria was measured by Pikovaskaya on Pikovaskaya’s Agar Medium and clear transparent zone around the bacterial colony confirmed phosphate solubilization activity within 24 to 72 h (Pikovaskaya 1948).Indole acetic acid (IAA) Production was detected as described by Bric et al. 1991. Appearance of pink colour in broth by adding of Salkowaski reagent indicated IAA production. For the quantification of IAA, absorbance was taken at 540 nm by using UV/visible spectrophotometer (Bric et al. 1991).

HCN production was evaluated on Whatman filter paper No.1 soaked with picric acid (0.05%) solution in 2% sodium carbonate and placed in the test tube sealed with parafilm and incubated. A colour change of the filter paper from deep yellow to reddish-brown colour at 30°C for 48-72 h indicated HCN production and quantified (Baker et al. 1987). Siderophore production of bacterial isolates was detected by observing orange halo zone around the bacterial colony on chrome azurol S agar media after 72 h of growth. Quantification of siderophore was calculated in µg/ml (Schwyn and Neilands 1987).

Table 1. Isolation of bacteria from rhizospheric soil from different locations

Bacterial strain was identified on the basis of morphological appearance of bacterial colony and their biochemical performance which is mention in table 1. BHU1 showed green pigmentation while BHU3 isolates showed yellow pigmentation on YEMA agar media with rough and shiny surface (Table2).

Some PGPR have been reported to produce citrate, lactate, succinate activity that dissolve the mineral phosphates as a result of anion exchange or chelation of Fe and Al ions associated with phosphate. This leads to an increase in the soluble P in the rhizosphere resulting its more uptake by the plants. IAA is important phytohormones which stimulatory effect on plant growth under biotic stress condition. Among four bacteria, three bacteria produced IAA in tryptophan yeast broth. Highest IAA production was recorded by BHU1 (89μg/ml) followed by BHU4 (82 μg/ml) and minimum IAA production by BHU2 (5 μg/ml) production (Figure 1&2B) (Shahzad et al. 2008).

HCN producing bacteria (BHU1, BHU3 and BHU4) showed antagonistic activities against phytopathogen three bacteria produced HCN with highest HCN production 13ppm by BHU1 (Figure 2C). HCN production is a type of volatile organic compounds (VOCs) toxic for phytopathogenic nematodes and provides protection from various biotic stresses. As the plants exposed to nematode infection grow weak in their defense system hence shielding them by HCN producing bacteria which can be helpful in overcoming the chances of pathogenic infection. Siderophore production was confirmed by the change of CAS broth colour to brown colour (Fig. 1C). 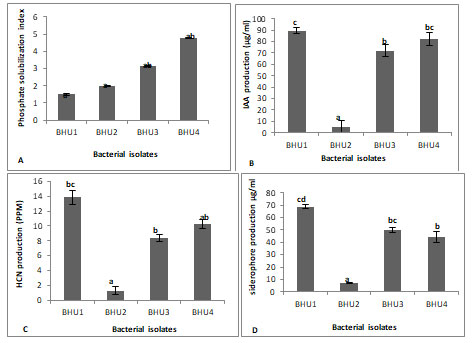 Extracellular enzyme activities are important parameter for selection of growth promoting bacteria and also favour strong evidence for improve defense mechanism. Selected bacteria were showing positive catalase activity, maximum catalase production was observed by BHU1 and BHU4. The oxidase test used to identify bacteria that produce cytochrome C oxidase, an enzyme of the bacterial electron transport chain. The reagent N, N-dimethyl-p-phenylenediamine is a dark-blue to maroon color when oxidized and become colorless  when reduced. BHU4 was observed strongly positive for oxidase test. Chitinase enzyme serves various functions such as antagonistic activity against chitin-containing pests and in nutrient cycling. BHU4 strain produced chitin followed by BHU2. Gelatin hydrolysis test is used to detect the ability of an organism to produce gelatinase which is a type of proteolytic enzyme that liquefy gelatin hydrolysis of gelatin indicates the presence of gelatinase (Subedi et al. 2020).

Maximum gelatin was produced by BHU4 bacteria followed by BHU2 (Table3). Three bacterial isolates BHU1, BHU3 and BHU4 had greater efficiency to produced lytic enzyme like catalase, oxidase, chitinase amylase and gelatinase. Calalase and oxidase enzyme reduce the oxidative damage while α-amylase enzyme in the aleurone layer helping in hydrolyzing the endosperm starch into sugars, which provide the energy for vigour index parameter. Other important mechanisms include production of extracellular lytic enzymes, such as CHI, β-1,3-GLU and protease, which lyse chitin and glucan (present in the cell wall of fungi) and protein in the nematode cuticle (Lee et al. 2015; Gupta et al. 2017; Subedi et al. 2020; Sahebani and Gholamrezaee 2021).

When these bacteria were examine for their antagonistic properties against M. incognita three bacteria BHU1, BHU3 and BHU4 kill nematode but BHU2 did not show ability to kill it (table 4 and 5). Bacteria BHU1 and BHU3 kill M. incognita 100% and 93% respectively after 12 hours. The bacterial mechanism of infection caused the lysis of nematode M. incognita particularly on the oesophageal region (BHU1) and intact body (BHU3) which is mention in table 4 and 5.

In many studies it has been found that growth promoting microbes produced various types of secondary metabolites and volatile organic compound (VOC) at infected region. Antagonistic bacteria tend to prohibit the invasion of RKNs into the roots and maintain the balance of nutrients and mineral status in plants moreover, growth promoting bacteria also control the gall formation and maintain the vascular integrity in order to boost the physiology and biochemistry of the plant. Consequently, the most vital mechanism to prevent gall formation through PGPR’s by production of nematicidal compound like hydrogen sulfide, ammonia, butyric acid and degradation of nematode attractants of root exudates. Furthermore, they bind to the root surface and produced hydrolytic enzyme that can kill the nematode (Safni et al. 2018; Sahebani and Gholamrezaee 2021).

Table 4. Mechanism of antagonistic bacterial infection inside the body of M. incognita 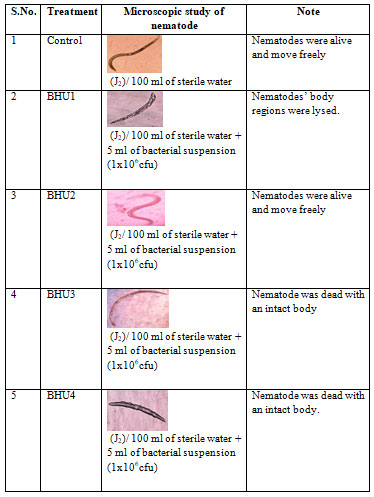 Biopriming tomato seed with bacteria showed higher root length, shoot length, vigour index and reduced gall/ knot formation after 21 days of seed germination. In the current study, it has been found that M. incognita cause root knot disease in tomato seedling resulted in declined root length, shoot length, fresh weight and dry weight, leaf area, leaf number of tomato seedlings.  This reduction is due to the formation of root knot in the root leads to the reduction in the growth promotion due to disruption of root system of tomato plant and inhibition of nutrient uptake from the root system (Safni et al. 2018; Sahebani and Gholamrezaee 2021).

Growth promoting attributes like nutrient mobilization and hormone production maintained even under stressed condition by BHU1, helped in enhancing the root growth, nutrient and water uptake and augmenting the dry weight. Highest root and shoot dry weight were observed by BHU1 and BHU3 strain as compare to control plant. High phosphate solubilizing activity of BHU1 more than 4.8cm zone of clearance must have favored the plant growth directly and depicted as enhancement of fresh and dry root weight and shoot weight respectively and the leaf area had significantly increased and the treated plant with BHU1 and BHU4 was observed to impart more leaf area with 124% increment as compare to control plant. Biopriming of seed with selected bacteria significantly enhanced percentage of seed germination ranged from 57-100%. Maximum vigour index 3880 as compare to untreated plant was observed  in BHU1 treated seed which is a very important parameter for promotion of plant growth (Table 6). While almost similar type of result was also observed in tomato by bacterial induction of resistance in tomato against root-knot nematode M. javanica with biocontrol agents (Zhai et al. 2018; Dey and Raghuwanshi 2020; Mazrou et al. 2020). 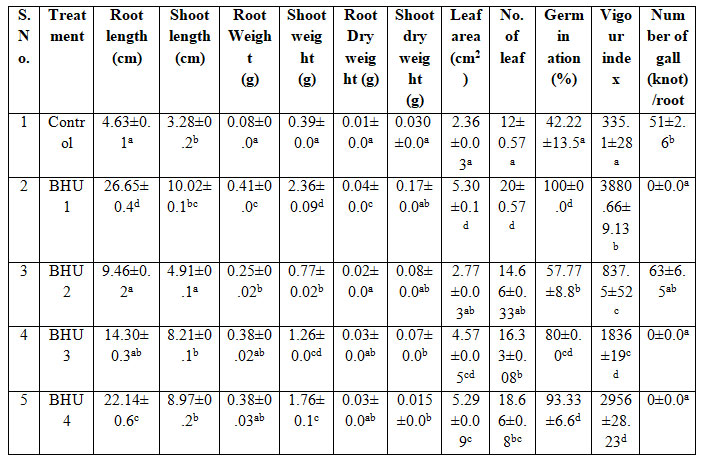 The finding of the present study suggests that BHU1 bacterial strain have a very good potential to augment plant growth activity and potential biological control managing root knot nematodes in tomato and in feature leads to incorporate compatible other microorganism enhancing their positive attributes to replace chemical application with promising biocontrol agent. While studying the rhizospheric microorganism and their interaction with plant under biotic stresses there are chances to recognized some microorganism which can enhance directly or indirectly defense immunity in the plant. The performance of individual bacterial strain will always lead to screen potential microorganism for harnessing them to mitigate losses occurred due to biotic stresses.

Conflict of Interests: Authors have no conflict of interests to disclose.

Pikovskaya, R.I. (1948). Mobilization of phosphorous in soil in connection with vital activity of some microbial species. Mikrobiologiya, 17:362–370.