Analysis on the Novel Approach of Using Colloidal Silver Against E. coli Persisters to Ampicillin

A five-log reduction in log phase population and two log reduction in antibiotic persisters was observed after one hour exposure to 16ppm silver; indicating the effectiveness of colloidal silver. Colloidal silver decreases the formation of Ampicillin persisters as well as prevents the survival of existing Ampicillin persisters. In order to combat recurrent bacterial infections, methods need to be found to reduce the formation of pathogenic bacterial persisters or to enhance the susceptibility of persisters to antibiotics. The results of the present study imply that colloidal silver can be used as an anti-persister strategy directly or in combination with an antibiotic.

Braggs C, Desouza A. Analysis on the Novel Approach of Using Colloidal Silver Against E. coli Persisters to Ampicillin. Biosc.Biotech.Res.Comm. 2021;14(2).

One of the main factors that contribute to the recurrence of infection is persistence. Persistence was first observed as a phenomenon by Bigger when a population of S. aureus survived after treatment with Penicillin (Bigger 1944). Bacterial persisters are distinct physiological variants that exhibit tolerance to antimicrobial agents. Tolerance towards antimicrobials makes treatment of such recurrent infections difficult (Moorhouse et al. 2016).

Persistence differs from antibiotic resistance since resistant cells grow in the presence of higher doses of antibiotics while persister cells remain dormant. Multidrug tolerance of persisters is one of the major factors for recurrent infections and the inability of antibiotics to eliminate the pathogen (Waters and Bassler, 2005; Lewis, 2008; Moker et al. 2008; Lewis, 2010). Many antibiotics have been shown to be active only against dividing bacteria. Persister cells are known to greatly slow down essential cellular functions that are generally targeted by antibiotics such as transcription, translation, cell wall synthesis and DNA replication (Kwan et al. 2013).

Metal and metal ions exert bactericidal effect through multiple mechanisms in contrast to site specific action of an antibiotic. Metals are involved in high-affinity, energetically favourable, reactions with a number of target biomolecules (Harrison et al. 2005). Silver or silver ions have been known to possess a broad spectrum of strong inhibitory and microbicidal effects (Lansdown 2006). Silver ions react with proteins by combining with the thiol (–SH) group leading to their inactivation (Russell and Hugo 1994; Feng et al. 2000).  Colloidal silver has been shown to be very effective as an antibacterial agent (Morrill et al. 2013; Domínguez et al. 2020). A colloid consists of solid particles (1 nm to 1000 nm) suspended in a liquid. Colloidal silver comprises of two distinctly different forms of silver; metallic silver particles and silver ions (Domínguez et al. 2020).

The total amount of silver that is reported as the silver concentration in parts per million (ppm) is the sum total of the silver contained as particles as well as ions. Colloidal silver has multiple modes of action which makes it more effective (Silverbiotics.com). The nano colloidal silver particles get attracted to the surrounding water molecules and become a part of the structure of the water. This makes the colloidal silver much more stable and bioavailable than other forms of silver. It has the ability to attract and accept multiple electrons compared to ionic silver which can accept only one electron. Treatment with colloidal silver also leads to an increase in production of Reactive Oxygen Species (ROS) further enhancing the killing of bacterial cells (Domínguez et al. 2020).

Minimum Inhibitory Concentration (MIC): The MIC of Ampicillin for E. coli NCIM 2665 was determined by the broth dilution method according to Clinical and Laboratory Standards Institute (CLSI) Standards (CLSI 1991, 2015). The concentration range used was 2-10μg/ml of Ampicillin. Presence of growth was measured as Optical density (O.D) at 530nm after 24hours.The presence of E. coli NCIM 2665 persisters to Ampicillin was determined by dose dependent and time dependent kill curve.

Dose dependent kill curve: To determine the antibiotic concentrations that result in the survival of only drug-tolerant persister cells, killing curves were performed. Dose-dependent study was done using different concentrations (40x, 80x, 100x MIC) of Ampicillin against E. coli. Respective antibiotic concentrations were added to 10 ml of log phase culture and further incubated at 37oC, 220 rpm for one hour. The medium was separated by centrifugation at 8000 rpm for 10 mins and the cell pellet obtained was washed thrice with sterile saline and then suspended in 10ml sterile saline. Cell counts were determined in triplicates by drop plate technique on LB agar plates using 10μl of the dilutions (Miles et al. 1938; Moker et al. 2010).

Time dependent kill curve:  The antibiotic concentration determined by the dose dependent kill curve was added to log phase culture and incubated at 37oC, 220 rpm for time intervals of 1, 2 and 3 hours. After the designated incubation time, samples were centrifuged at 8000rpm for 10 mins.  The cell pellet was washed thrice with sterile saline, and then suspended in 10ml sterile saline. Cell counts were determined in triplicates by drop plate technique on LB agar plates using 10μl of the dilutions to determine the number of surviving persister cells.

Persister cells are obtained by exposure of log phase cultures to a certain concentration of antibiotics for a given time interval. Based on dose and time dependent kill curve experiments, the log phase cultures of E. coli were treated with 400μg/ml of Ampicillin for 1 hour. The high concentration of antibiotic would kill non persister population; resulting in survival of only persister cells. After the antibiotic treatment, the cells were pelleted by centrifugation at 8000rpm for 10 mins. The cell pellets were washed thrice with sterile saline and then suspended in sterile saline. Persister cell numbers were determined by drop plate technique using 10μl of the diluted cell suspension on LB agar plates. The number of colonies obtained represents the number of cells that survived the high antibiotic exposure for one hr and thus were considered as persisters.

Minimum Inhibitory Concentration (MIC) of Colloidal silver for E. coli NCIM 2665: MIC was determined by the broth dilution method according to CLSI Standards. The concentration range of colloidal silver used was 1- 10ppm.  Presence of growth was measured as Optical density (OD) at 530nm after 24hours.

The concentrations of Ampicillin used were 0-20μg/ml while that of colloidal silver were 0-5ppm. After incubation at 37oC for 24hr, the growth was determined by measuring optical density at 530nm and further confirmed by addition of 10μl of Triphenyl tetrazolium chloride TTC solution (1%w/v) to each well. Conversion of colourless TTC solution to red Formazan indicated growth. The Formazan intensity was measured at 490nm. According to the CLSI guideline, synergy between drugs is determined by calculating the Fractional Inhibitory Concentration (ƩFIC) index. 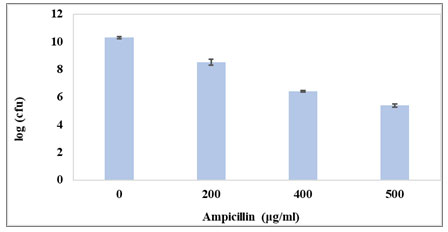 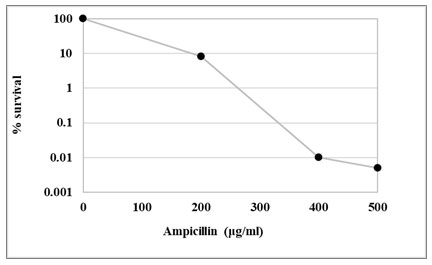 Time dependent kill curve: Survival of E. coli population on exposure to 400μg/ml Ampicillin at different time intervals (1hr, 2hrs and 3hrs) is presented in Fig. 3. The control was log phase culture incubated without any antibiotic for the same time period. The time kill curve in Fig. 4 shows a typical biphasic curve with rapid decrease in population at the end of 1 hour; followed by constant surviving population count with further increase in time of exposure to antibiotic. As exposure time of one hour resulted in maximum persister cell number; for further experiments, persister population was obtained by exposing log phase culture to 400μg/ml of Ampicillin for 1 hr at 37oC and 220rpm. 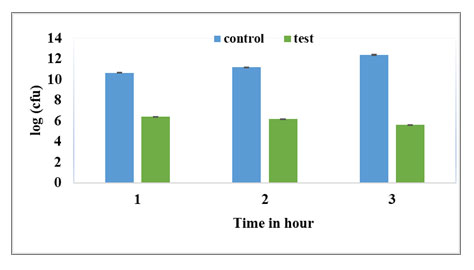 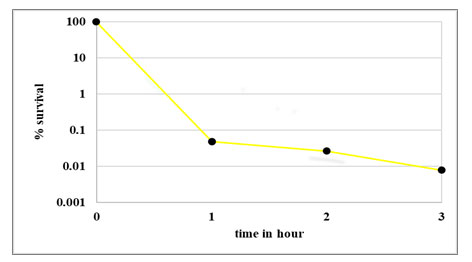 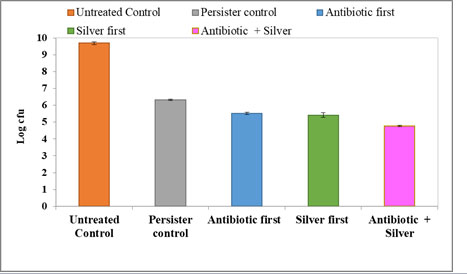 The number of persisters decreased under both conditions namely when silver was added prior to the addition of Ampicillin or when it was added after the antibiotic.  Also, when Ampicillin and silver were added simultaneously at log phase, persister population decreased further significantly.  Fig. 6 represents the percentage survival under the three different experimental conditions. The persister control is the number of cells that survived after exposure to 400μg/ml of Ampicillin for one hour.

The percentage of persister cell survival in the presence of 400μg/ml of Ampicillin was found to decrease in the presence of silver under all three experimental conditions. It can be concluded that 4ppm colloidal silver was able to significantly decrease the formation of E. coli persisters to Ampicillin. The results obtained by the three experimental set ups (Fig. 6) were compared with the persister control and statistically evaluated using one way ANOVA followed by Bonferroni post hoc test.  For all the three sets using silver, decrease in the population was found to be statistically significant (P<0.001). 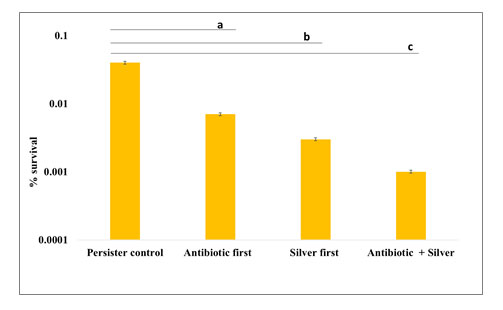 A combined action is considered additive, if the ƩFIC lies between 0.5 to 2. Hence, colloidal silver and Ampicillin were found to exert an additive effect on E. coli persisters to Ampicillin. Colloidal silver significantly reduced the inhibitory concentration of Ampicillin. 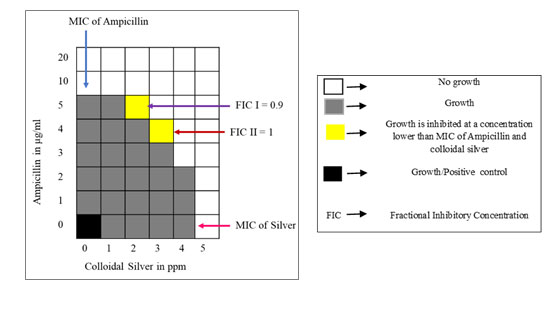 At 16ppm, a five-log reduction was observed as compared to untreated control log phase population. There was total killing of cells on exposure to 18ppm for 1 hour. For isolation of persisters to Ampicillin; E. coli NCIM 2665 was exposed to 80xMIC (400μg/ml) and 100xMIC (500μg/ml) for 1 hr. However, E. coli was able to tolerate 1 hr exposure to only 16ppm of colloidal silver which is 4xMIC and 18ppm brought about total killing in 1 hr.  It seemed evident that E. coli NCIM 2665 does not form persisters to colloidal silver. 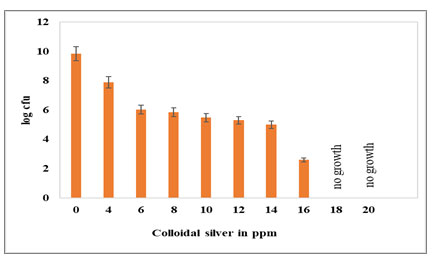 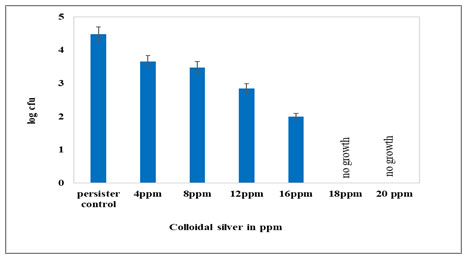 Figure 10: Survival percentage of log phase population and Ampicillin persisters of E.coli in the presence of colloidal silver. The population counts taken prior to the treatment with colloidal silver were considered as 100%. No growth indicates no viable cells or zero percent survival. 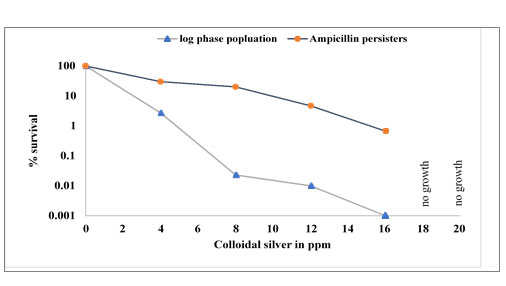 Bacterial persisters are phenotypic variants that form under stress and possess antibiotic tolerance (Bigger 1944; Lewis 2010; Fisher et al. 2017; Van den Bergh et al. 2017). Bacterial persistence is an emerging problem in addition to drug resistance. Recurrence of an infection indicates survival of the pathogen in the host for longer duration (Levin and Rozen 2006; Michiels et al. 2016; Meylan et al. 2018; Bartell et al. 2020). Increasing the dosage or duration of the antibiotics not only increases tolerance towards the drugs but also promotes persistence.

Polymyxin B, poly-L-lysine and phenothiazine have also known to reduce the persistent phenotype in Escherichia coli and Pseudomonas aeruginosa (Mohiuddin et al. 2020). Electrochemical methods combined with antibiotics have been suggested as an effective alternative for persister cell elimination (Sultana et al. 2016). The use of copper to control persisters has been recently shown to be effective (Moreira et al. 2020). Silver is known to enhance antibiotic activity against Gram-negative bacteria (Morones et al. 2005; Morones et al. 2013).

However, till date the use of silver against persisters is not known. Hence the use of colloidal silver in this study is a novel alternative approach to control bacterial persister cells (Moreira et al. 2020). In the present study, E. coli NCIM 2665 persisters were obtained at Ampicllin concentration of 400μg/ml. The cell population so obtained on exposure to 400μg/ml of Ampicillin for 1 hr were considered to be persisters since they exhibited a biphasic killing curve (Keren et al. 2004; Moker et al. 2010; Kamble and Pardesi 2020).

A drastic five log reduction in log phase population and two log reduction in antibiotic persisters at 16ppm of colloidal silver, indicates the its effectiveness. There was total killing of log phase culture as well as Ampicillin persisters at 18 ppm silver. Overall decrease in persisters observed after simultaneous addition of silver and Ampicillin may be attributed to the killing effect exerted by colloidal silver on log phase cells as well as on the antibiotic persisters once formed. Additive effect as seen in the checkerboard assay may also contribute to it. Colloidal silver may be modifying the physiological state of the cells or the state of the environment such that persistence is not promoted.

This study confirms that colloidal silver can be considered as a promising anti persistence strategy.  It can be used either as the sole bactericidal agent or can be used to enhance the effectiveness of an antibiotic. The key advantage of colloidal silver besides its inhibitory effect is that persister cells to the colloidal silver do not seem to be formed.

Conflict of Interests: There was no conflict among the interests of the participating authors.