Sickle cell disease (SCD) is an inherited disorder of hemoglobin structure and synthesis, with chronic hemolysis, repeated infections, and recurring microcirculation occlusions. Cytokines play a role in hemopoiesis control, immune function suppression, and the development of growth deficits. This study aimed to determine and analyze some important pro-inflammatory cytokine (IL-8, IL-18, IL-1β, and TNF-α) levels and compare them in patients with SCD versus healthy males and females of the general Saudi population. This comparison helps to explain the possible role of cytokines in the development of SCD and the effect of hydroxyurea on the cytokines. A cohort study was performed that included 56 patients Sickle cell anemia patients with hydroxyurea (SCAHU) and Sickle cell anemia patients without hydroxyurea (SCA) and 22 controls (healthy group). Plasma cytokine concentration was detected using ELISA and compared in the different groups.

Chronic hemolysis, repeated infections, and persistent occlusions of the microcirculation are all symptoms of sickle cell disease (SCD), a hereditary disorder of hemoglobin (Hb) structure and synthesis. These complications cause painful crises and eventually result in chronic organ damage, disability, and death (MJ, 2004). Vaso-occlusion is a direct cause of morbidity and mortality in patients with SCD (Keikhaei et al., 2013).

SCD is caused by a mutation in the sixth codon of the beta globin gene, which causes the nitrogenous base adenine to be replaced by thymine; thus, the glutamic acid is replaced by valine, resulting in hemoglobin (HgbS) (Connes et al., 2018). This mutation can be homozygous (SS), resulting in sickle cell anemia, a disorder of increased severity and frequency (Macharia et al., 2018), or a mutation in combination with other hemoglobin defects—including Hb C, D, E, and beta-thalassemia (Allali et al. 2020). SCD refers to all symptomatic variants of this gene (Sílvia et al., 2019).

Cytokines have been linked to several possible mechanisms vaso-occlusion in SCD: vascular endothelial activation, red-cell adhesion to vascular endothelium, neutrophil adhesion to endothelium, development of vascular intimal hyperplasia, platelet activation, endothelin-1 synthesis, and endothelial apoptosis dysregulation. Additionally, cytokines are believed to play a role in hemopoiesis control, immune function inhibition, and the production of growing deficits. The study of cytokines in SCD patients will shed light on the pathogenesis and symptoms of the disease, as well as aid in determining the nature and prognosis of the disease (Darbari et al., 2020).

The use of Hydroxyurea (HU) to treat people with SCA has been shown to lower white blood cell (WBC) counts and myeloperoxidase function (Gueye-Tall et al., 2020), as well as cell adhesion properties. Despite evidence of the important role of leukocytes in modulating clinical and pathophysiological aspects of SCA, the mechanism by which leukocyte numbers rise in SCA patients remains unknown, though changes in leukocyte-producing cytokines have been suggested to participate in this phenomenon (Allali et al., 2020).

The study was performed after obtaining the ethical approval number (243-19) from The Biomedical Research Ethics Committee, Ministry of Higher Education, King Abdulaziz University, Faculty of Medicine (Reference No 243-19). The study included 78 males and females, 22 of whom were in the control group, and 56 of whom were divided into two groups: steady-state patients and SCA patients under hydroxyurea therapy (SCAHU) who were diagnosed and who followed up with the Hematology and Hemotherapy Center of King Abdulaziz University Hospital. Each of them was issued a written and informed consent for their participation in the study.

Table 1 described the participants’ hematological characteristics for the control group, the SCA group, and the SCAHU group. Looking into the hematological characteristics of all three groups, a significant statistical difference was reported as follows: there were statistically significant differences between the control group and the SCA group for WBC, RBC, hemoglobin (Hb), hematocrit (HCT), platelets, neutrophils, lymphocytes, monocytes, eosinophils, and basophils, where the p-value was less than 0.05. 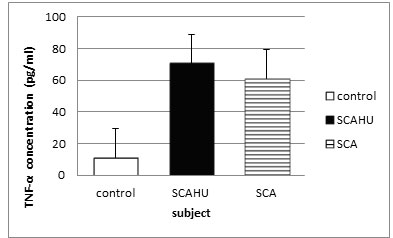 The data showed that SCAHU has the highest level of TNF-α compared to control and SCA. Significant higher levels were recorded in SCA group and SCAHU than the control group (p = 0.001). However, there is no significant differences in the level of TNF-α between SCA and SCAHU. 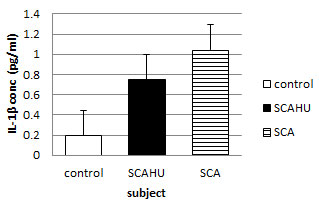 In the present study, our findings showed that levels of pro-inflammatory cytokines (IL-8, IL-18, IL-1β, and TNF-α) were higher in SCAHU patients compared to healthy men and women in the control group. The elevated levels of cytokines observed may be because of the increased secretion by the leukocytes and platelets that were significantly elevated in the SCAHU patients compared to the control.

The data from this study showed a significant difference in the concentration of the studied cytokines IL-8, TNF-α, IL-18, and IL-1β. All of the cytokines were higher in the SCA and SCAHU groups compared to the control group. More specifically, the data from IL-8 and TNF-α suggest a higher concentration in the hydroxyurea-treated group. Significantly, the elevated TNF-α found in the SCA classes matches the results from Lanaro et al.

(2009) and Goncalves et al. (2001). Both groups of researchers found that SCA patients had higher levels of circulating TNF-α at a steady-state and during the crisis (Gonçalves et al., 2001, Lanaro et al., 2009). However, these studies differed from a study by Laurentino et al. (2014), who found that patients receiving HU treatment had lower TNF-α levels compared to patients who were not receiving HU (Laurentino et al., 2014). TNF-α stimulates leukocytes and the coagulation cascade, resulting in an increase in the plasma levels of acute-phase plasma proteins, including fibrinogen, which aids erythrocyte adhesion to endothelium. In SCA patients, these factors contributed to the growth of vascular occlusion (Eggestøl et al., 2020).

The neutrophils react to IL-8 as a chemotactic component. IL-8 is thought to be the mediator of the neutrophil activation seen in SCA patients during Vaso-occlusive crises (VOC) and is supplemented by other pro-inflammatory mediators (Liu et al., 2020). The findings of higher plasma IL-8 levels in patients with SCAHU and SCA agree with those of other researchers who discovered higher IL-8 levels in patients with acute chest syndrome and patients with vaso-occlusion (Domingos et al., 2020).  IL-8 promotes inflammation through the adherence of sickle red cells to the endothelium through the α4β1 integrin receptors on sickle reticulocytes (Etienne-Julan et al., 2004). The passive mechanical obstruction that leads to vaso-occlusion in SCA is aided by the active mechanism of endothelial adhesion (Grunenwald et al., 2021).

TNF-α levels in the blood were higher in SCD patients in steady-state trials (Tavakkoli et al., 2004) and during crisis events (Pathare et al., 2004). On the other hand, circulating IL-8 was historically only found in SCD patients who were in a state of distress or who presented with an acute syndrome (Abboud et al., 2000). TNF-α, a pro-inflammatory cytokine, has been implicated in a variety of inflammatory disorders, including sepsis, rheumatoid arthritis, and Crohn’s disease, where it tends to play a role in upregulating the cytokine cascades that trigger inflammation (Clark, 2007). IL-8 is an important mediator in neutrophil-mediated acute inflammation as well as a central player in a variety of chronic inflammatory disorders and lung pathologies. Pro-inflammatory cytokines—TNF-α and IL-1β, as well as other inflammatory molecules, such as bacterial products—can induce IL-8 production at the level of gene transcription and mRNA stability (Tsai, 2020).

In SCD, IL-1β is thought to play a role in vaso-occlusion through its involvement in inflammation, cellular adhesion, signaling, transmission, and coagulation. In our data, IL-1β levels were high in both the SCA and SCAHU groups. One study observed that cytokine IL-1β was significantly higher in steady-state SCD patients when compared to control group (Pathare et al., 2003). IL-18 is a pleiotropic cytokine that promotes neutrophil accumulation and induces acute inflammation in the innate immune system.

These functions may cause the effects seen in the vascular events in SCA, but previous research has not found a function for IL-18 in SCA patients. The IL-18 levels in the blood have been shown to increase during a serious sepsis episode, implying that this cytokine plays a role in both host defense and possible host damage because of tissue lesions. In this study, the plasma IL-18 levels were significantly higher in both the SCAHU and SCA groups versus the control, but there was no significant difference between the SCA and SCAHU groups. According to Cerquera (2011), SCD and vaso-occlusion are linked to IL-18, also typical red blood cell deformation-related disease and endothelium activation are heavily related to the same cytokines.

As a result, investigating the impact of cytokines on the vascular endothelium and adhesion molecule expression, as well as their possible function in clinical outcomes in SCD patients, is a fascinating and important field of research (Vilas-Boas et al., 2010) (Barbu et al., 2020). In one study, the evaluation of serum cytokines in all SCD patients was compared to normal controls. All inflammatory cytokines, except IL-1β, showed an elevated levels in both steady-state and VOC. All cytokines showed substantial variations between VOC patients and controls, with the exception of IL-1β, which had no significant, detectable levels in the serum of patients in the steady-state condition or normal controls (Silva-Junior et al., 2021).

HU, the first drug with any clinically proven efficacy for SCA, can affect cell adhesion through several possible mechanisms, such as reduced HbSS erythrocyte adhesion, VCAM-1 down-regulation, and endothelin-1 expression, which are likely to contribute to the reduction of VOC episodes (Osunkwo 2020). Lanaro et al. (2009), reported that TNF-α levels in the blood were shown to be slightly lower in patients taking HU. TNF-α and IL-8 gene expression levels were also shown to differ significantly between patients who received and did not receive HU therapy (Lanaro et al., 2009).

In line with the afore mentioned study, we observed the possibility for a higher concentration of TNF-α and IL-8 in the HU group, but there was no significant difference in HU-receiving patients compared to those who did not receive the HU treatment. However, the beneficial effects of HU in SCD are regulated in part by elevated Hb F levels, which suppress HbS polymerization in red cells and are linked to a milder type of the disease (Croizat and Nagel, 1999).

Our results agree with a study that reported the beneficial effects of HU-induced increases in TNF-α levels in SCD patients (Tavakkoli et al., 2004). While previous findings suggest that HU may play a role in the reduction of vaso-occlusive episodes in SCD patients, further research is required to determine the exact mechanism of action for HU in relation to adhesion molecules and other inflammatory mediators, including cytokines (Osunkwo et al., 2020).

In conclusion, the current observations suggest that changes in cytokine levels are associated with SCD. The persistently elevated levels of these pro-inflammatory cytokines have further confirmed that SCA is a chronic inflammatory state and contributes significantly to the pathogenesis and the severity of pain in SCA. Additionally, HU treatment did not show any improvement in the control of the elevated levels of the pro-inflammatory cytokines investigated, but this needs further testing for confirmation. Therapies that target these inflammatory peptides could help to ameliorate or forestall bone pain crises in SCA. The results of this study suggest several interesting avenues of investigation that could be studied in the future.

Tsai, S.-J. (2020). role of interleukin 8 in depression and other psychiatric disorders. progress in neuro-psychopharmacology and biological psychiatry, 110173.