1Department of Botany, The University of Burdwan, West Bengal, India

Open cast pit (OCP) filled with surface runoff and groundwater recharge. A total of 40 PLs were enumerated and characterized to determine their nature, position,
depth, area and comparative account in RCF during the period of 2014–2017. A 1-year study of physicochemical parameters of water and soil was recorded at 27 selected mine PLs to understand its quality. During the study period,  the 14 most frequently cultured/naturally occurred fish species were collected and identified from the PL. PLs aged over 20–30 years turned naturally into wetland ecosystem harbouring a good amount of aquatic biota, excellent water quality and stabilized embankment. The present study is based on the relationship between seasonal variation of heavy metals and fish diversity. During the analysis it is found that there is a direct impact on heavy metal concentration in these OCPs during different seasons.

It was observed that concentration level differed among OCPs due to their different geographical location. Monsoon is the most vulnerable season for heavy metals concentration and pit lakes of Satgram area were more contaminated than those of Kajora Area. As a result of it, fish diversity and fish production were high in Parasea OCP and Ghanshyam OCP than Damalia OCP and Ratibati OCP and it may also be stated that post monsoon is most productive season in terms of rich fish diversity and fish production. The main aim of the work was to find out the relationship between the seasons and heavy metals concentration and its impact on fish diversity. It also gave emphasis to find out the probable measures for improvement of fishery sector.

In 1774 coalmining in India was first initiated in the Raniganj Coalfield, in Bengal province. Rich treasure of coal was found near Ethora, presently in Salanpur community development block by John Sumner and Suetonius Grant Heatly of the British East India Company. The exploration and mining operations were haphazard in early stage. Alexander & Co started regular mining in 1820. In 1835, after the collieries had been bought by Prince Dwarkanath Tagore the field was led by Carr Tagore and Company. The country witnessed Ranigunj coalfields as the major producer of coal for the entire 19th century and a major part of the 20th century (Chattopadhyay, 2001).

The pit-lake aquatic system depends on the physicochemical composition and nature of the bottom sediment and the growth and development of autotroph (like macrophytes) solely depend on the sediment of a water body that is called as the reservoir of nutrients (Barko and Smart, 1986). The availability of zooplankton from an OCP has lots of versatile bio indicating properties (Das and Chakrapani, 2011).These are: short life cycles, adaptation to changes of environment, vast distribution in various aquatic ecosystems, correlation in-between nutrient and energy cycles, and indicating to sudden environmental disturbances like acidification, thermal conditions, pollution, water flow and level of salinity, etc. (Litchman et al., 2013; Lokko et al., 2017; Pociecha et al., 2017; Zhao et al., 2018).

The scarcity of water is a regular problem in Raniganj coalfield area which is supplied water by rain fed rivers – Damodar, Ajay and Barakar. This problem can be solved by of getting water stored in the open cast mine pits of this area and at the same time these water bodies can be used for pisciculture (Tiwary and Dhar, 1994). This present study aims at finding out how the accumulated heavy metals make an impact on fish diversity in different pits of two areas of Eastern Coalfield Limited in Raniganj coalfield in respect of different seasons.

Study Area:The present study sites Ratibati & Damalia are now abandoned OCPs since 2017 and 1989 respectively, situated in Satgram area which is geographically around 23.674889°N Lat and 87.082754°E Long in Asansol sub div and Parasea & Ghanshyam OCPs both are abandoned since 2015-16 in Kajora area, located around 23.632407°N Lat and 87.171593°E Long in Durgapur sub div, Paschim Bardhaman. The Satgram and Kajora areas both are in E.C. Ltd. The Satgram area is surrounded by the Sripur Area and Kunustoria Area on the North, Kajora Area /Andal CD Block on the East, Bankura district on the South and Asansol sub div on the West. The Kajora area is confined by the Kenda Area on the North, Bankola Area on the East, Andal CD Block on the South, and Kunustoria Area on the West. 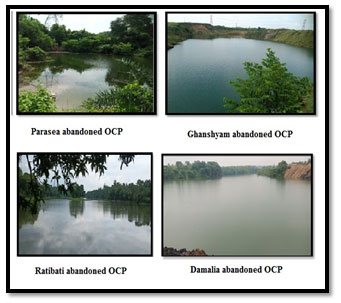 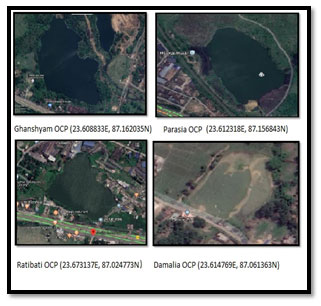 The primary samples were collected from four study sites of three consecutive seasonal phases, these are pre monsoon, monsoon and post monsoon seasons. After that these were brought to the laboratory for analysis by using APHA 23rd Edition, 1060. Parameters like As, Pb, Cr, Cu, Zn, Se, F, Mn were considered for observation. So many statistical methodologies were used in this study to explore the actual result. Arithmetic mean, ANOVA, frequency distribution (bar or comparative bar) was used. Standard protocols and methodologies were maintained during sampling and analyses of the mine water (BIS 1987).

For this study, water samples were collected from 4 OCPs for heavy metals analysis, among which Damalia and Ratibati OCP fall under Satgram area of E.C. Ltd. and Parasea and Ghanshyam OCP fall under Kajora area of E.C. Ltd. Various types of heavy metals, i.e. As, F, Se, Zn, Cu, Cr, Pb, Mn were taken into consideration for the study. Due to high amount of heavy metals channelized through surface runoff in monsoon months, the water quality deteriorated in high scale. On the other hand, the rate of contamination decreased in pre-monsoon and it becomes the lowest in post-monsoon.

So, it must be argued that post monsoon months are very favourable for aquatic ecosystem as well as fish breeding. Among the HM concentration, level of Chromium (Cr) and Lead (Pb) is very high in all season in respect of other HM, but its level is maximum in monsoon months in all four OCPs. As and Se level were observed also high in respect other two seasons. Permissible limit as per MoEF (Ministry of Environment and Forest) schedule-VI standard is the scale of consideration for measuring the magnitude of HM concentration in different seasons.

Rather, it is also found that the significance level is higher in all post-monsoon months. Season wise and OCP wise nature of fish diversity was also calculated using Shannon Weiner’s Species Diversity Index, which is very well known index for measuring fish diversity in various aspects.  More or less 14 fish species are found in these 4 OCPs during various seasons. These fishes have common names like rui, catla, calbaus, silver carp, punti, bata, mrigel etc. In all the OCPs, the most available fishes are rui, catla, calbasu, silver carp, mrigel. But their amount is varied during various seasons. Table 3 shows that the highest fish diversity (H) was found in post monsoon months, i.e. 2.37 and lowest diversity (H) seen in monsoon months, i.e. 2.28. 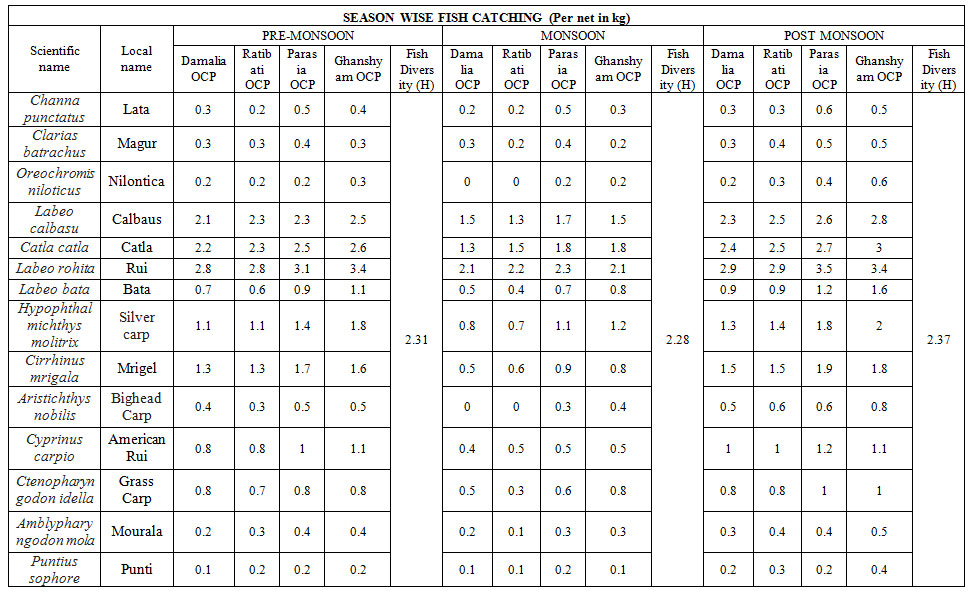 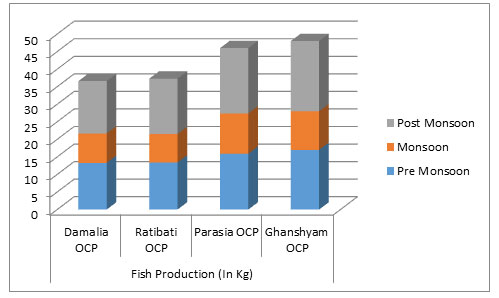 In respect of fish production (Figure 4), post-monsoon months are the highest productive months then other seasons. It is also showing that Parasea and Ghanshyam OCP of Kajora Area (ECL) are more productive than Damalia and Ratibati OCP of Satgram Area (ECL).

OCP wise productions of fishes are varied as:

Ghanshyam OCP>Parasea OCP>Ratibati OCP>Damalia OCP: West Bengal is a state covered by tropical monsoon season. Out of 3 seasons, i.e. Summer, Winter and Rainy season, Rainy or monsoon season is the dominant season. It comes after  the long summer. During hot summer, huge amount of water vapour is released over the sky of Arabian sea and the Bay of Benagal.

Trade wind move towards  land mass (impact of corriolis force ) as the high pressure belts are prevailling at Indian land mass. Due to formation of densed cloud, exsessive amount of rainfall occurs throught the gangetic plain land. As a result of intensive rainfall, large volume of rain water flows as a surface runoff. These runoff water is contaminated with heavy metals, pollutants (both biotic and abiotic) etc. So the `inland water bodies also may be contaminated. In Raniganj area, OCPs are filled with this runoff water as well as ground water. But the water recharge basically happens during monsoon months through drainage and contaminated water. These OCPs are too deep in nature. Due to season wise variation of contamination, fish diversity is also varied. Top soil parameters are also the key factors to the nature of contamination. It may be stated that as the rainy season is the most affective time in terms of HM contamination, fish diversity and fish production is low at that time.

But due to the lowest rate of contamination in dry winter or post-monsoon months, high fish production and fish diversity are observed. On the other hand the HM concentration is low in the OCPs of Kajora Area than OCPs of Satgram Area. So fish production and fish diversity are higher in Parasea and Ghanshyam OCP than those in Damalia and Ratibati OCP. This observation is justified by Palit and Kar (2019) investigation that 15 most frequently naturally or cultured fish species occure under 4 orders, 5 families and 14 genera that were collected and identified from the OCP in Raniganj coalfield. After the analysis of OCP water quality and questionnaire survey of the local peoples, it is recomendated that pisciculture project can be initiated in 25 OCPs. OCPs aged more then 20 years  turned naturally into wetland, harbouring a good amount of aquatic diversity, excellent quality of water without any restriction.

There are various future scopes regarding the optimum use of OCP water. It is observed that low nutrient level often minimises the fish foods and thus availability of primary production. It may be used for artificial or well managed fishing activities by the local people as sustainable developmental tools. For implementation of successful and sustainable fishing activity, pit lake fisheries need more considerations and attention on water quality, habitat and food sources which are the most important determinants. As these OCPs are too deep, trawl netting may be introduced for fishing. Post-monsoon-based planning may be initiated in that area as it is more productive and diversified season. Chemical water treatment through filtration may be introduced during rainy season. On the other hand, generally good water quality in OCP water contains elevated COPC which may bio magnify the OCP ecosystem and actually prevent a risk to end users and make profit for fisher men as well as local inhabitants. Proper training should be given to the local fisher men for advanced fishing techniques and procedure regarding OCP based fish production.

Dutta RK and Agrawal M (2002) Effect of tree plantations on the soil characteristics and microbial activity of coal mine spoil land Journal of tropical ecology, Vol 43 No 2, Pages 315-324

Ghosh M and Singh SP (2005) A review on phytoremediation of heavy metals and utilization of it’s by products Asian J Energy Environ, Vol 6 No 4, Pages18

Marín-Guirao L, Cesar A, and Marín A (2005) Establishing the ecological quality status of soft-bottom mining-impacted coastal water bodies in the scope of the, Water Framework Directive Marine pollution bulletin, Vol 50 No 4 Pages 374-387

Mercuri AM, Duggin JA and Grant CD (2005) The use of saline mine water and municipal wastes to establish plantations on rehabilitated open-cut coal mines Upper Hunter Valley NSW, Australia For ecological management, Vol 204 No 2-3 Pages 195-207

Peplow D and Edmonds R (2002) Effects of Mine Waste Contamination on Fish and Wildlife Habitat at Multiple Levels of Biological Organization in the Methow River 2001-2002, Annual Report DOE/BP-00004710-2

Sheoran V, Sheoran AS and Poonia P (2010) Soil reclamation of abandoned mine land by revegetation: a review, International journal of soil sediment water, Vol 3 No 2, Pages 1940-3259