Response of Rabi Maize to Different Methods of Irrigation and Fertigation

A field experiment was conducted on maize for three cropping seasons during rabi 2008-09, 2009-10 and 2010-11 in strip plot design with 3 replications at Water Technology Centre farm, College of Agriculture, Rajendranagar, Hyderabad to determine the best irrigation scheduling and fertilizer level  through drip fertigation to optimize maize grain yield and water productivity. The treatment consisted of four irrigation methods and schedules as main treatments (surface furrow irrigation at 1.0 IW/CPE, drip irrigation at 0.7, 1.0 and 1.2 Epan and three fertigation levels (150, 100 and 75% NPK Recommended Dose of Fertilizer (RDF)) as sub treatments. The results showed that increasing the irrigation water quantity and the fertilizer level (NPK) increased the maize grain yield. The highest and the lowest grain yield were obtained under the drip fertigation scheduled at 1.2 and of 0.7 Epan, respectively.

Maize is grown in kharif (June to October) under rain fed and also under supplemental irrigation and in rabi (November to March) under irrigated conditions. The maize crop is irrigated with furrow or check basin where the irrigation efficiency seldom exceeds 50%. Being most exhaustive crop, maize extracts more nutrients and also responds well to the irrigation as it’s one of the crops with higher yield potential. Since water and nutrients are the critical inputs for agriculture, their better management and effective utilization is very much essential for successful crop production and is also a serious challenge to future food security and environmental sustainability (Hanumanth et al., 2016 Shruthi et al., 2018).

Fertigation along with drip irrigation has gained importance in present day crop production as water is a limiting factor and major source for crop production. In India, the irrigation efficiency does not exceed 40%. Due to water scarcity, the available water resources are to be effectively utilized through adoption of water saving technologies. Under such situations, increase in water productivity has greater role. It has been observed that the productivity of maize increases with increase in fertilization (Reddy et al., 1980) without considerable increase in water consumption. This results in higher productivity of water.  Supply of nutrients to the crop at the time of maximum requirement is important.

Supplying nutrients to the crop during growth period continuously helps in improving the efficiency and productivity of water and nutrients. The supply of nutrients in small quantity continuously at the root zone is possible through drip system of irrigation. With drip fertigation the nutrient application efficiency can be increased up to 90% (Dioudis et al., 2003; Payaro et al., 2006 Hanumanth et al., 2016). Further, it is very important to consider how much fertilizer to be given and when to give the fertigation and also the crop stage and its nutrient demand, thereby one can achieve higher water and nutrient efficiency in addition to higher yield and economic returns.

The traditionally grown maize crop is fertilized with NPK in the form of urea, SSP/DAP and MOP. While the entire P and one third of N and half the dose of K are applied as basal, the remaining N is applied in 2 equal splits at knee high stage and flowering and rest of the K is applied at flowering. However, these fertilizers are not efficient to be made through drip irrigation. Better availability of nutrient with water soluble fertilizers result in higher growth attributes at fertigation levels of 50 and 75% RDF through drip over 100% RDF through soil.

Similar results were found by Kumar and Pandian (2010) and Muthukrishnan et al., (2011).  The recent research findings have also  revealed an increased crop yield and fertilizer use efficiency with fertigation supplied with water soluble NPK fertilizers (El-Hendawy et al., 2008, Hanumanth et al., 2016  Shruthi et al., 2018). Keeping in view of the above, a trial was conducted to evaluate the performance of rabi maize at different irrigation and fertigation levels with conventional and water soluble fertilizers to know yield performance and water productivity of rabi maize in semiarid regions.

The experiment was conducted at Water Technology Centre Farm, Agriculture College, Rajendranagar, Hyderabad during rabi seasons of 2008-09, 2009-10 and 2010-11. The soil was sandy clay loam in texture with pH of 8.19, E.C of 0.57 dS m-1 along with a field capacity of 14.82 %. The fertility status of experimental site was low in nitrogen (242 kg ha-1), medium in phosphorus (37 kg ha-1) and high in potassium (526 kg ha-1). The experiment was laid out in strip plot design with three replications. The four main treatments consisted of combination of irrigation methods and schedules viz. surface ridge and furrow irrigation at 1.0 IW/CPE, surface drip fertigation at 1.2, 1.0 and 0.75 Epan and three sub-treatments viz. fertilizer doses (150, 100 and 75% of recommended NPK). The maize hybrid DEKALAB super 900M  was sown on 3rd, 5th and 3rd November in rabi 2008-09, 2009-10 and 2010-11, respectively on flat bed in paired row (40/80 cm) under surface drip irrigation and in ridges and furrows under conventional method of irrigation.

The drip system was laid out at 120 cm lateral spacing and 40 cm between dripper spacing with discharge rate of 2lph. In all the treatment combinations a spacing of 60 cm x 20 cm was adopted. The recommended fertilizer level of (120-60-50 kg NPK ha-1) was applied through conventional straight fertilizers in conventional irrigation. In drip irrigation treatments, the fertilizers viz. water soluble fertilizers 19-19-19 (NPK), Mono Ammonium Phosphate (12-61-0 NPK) and KNO3 (13-0-46 NPK) were used as fertigation at 8 days interval from 12 to 80 DAS. Irrigations were scheduled as per the treatments by taking decennial average evaporation data obtained from Agro-Climatic Research Centre, Agricultural Research Institute, Rajendranagar, Hyderabad. Irrigation was scheduled at 3 days interval in drip and 6 to 8 days interval in ridge and furrow method of irrigation.

The recommended agronomic practices and plant protection measures were adopted as and when required. Irrigation water was scheduled to each treated plot at a pre-determined pan evaporation replenishment factor after adjusting the effective precipitation received (CropWat) and the amount of water discharged was measured through water meter attached to the irrigation system control unit. The water productivity (kg m-3 of water) was calculated by following equation.    WP = Y/ WA (IR+ER) Where,  Y = Grain yield (kg ha-1); WA (total water used in m3) = IR (irrigation) + ER (effective rainfall). The data on yield and water consumed in the experiment were recorded and the grain yield was analyzed statistically and where ever the treatment differences were found significant (F test), the critical difference was calculated at 5% probability. 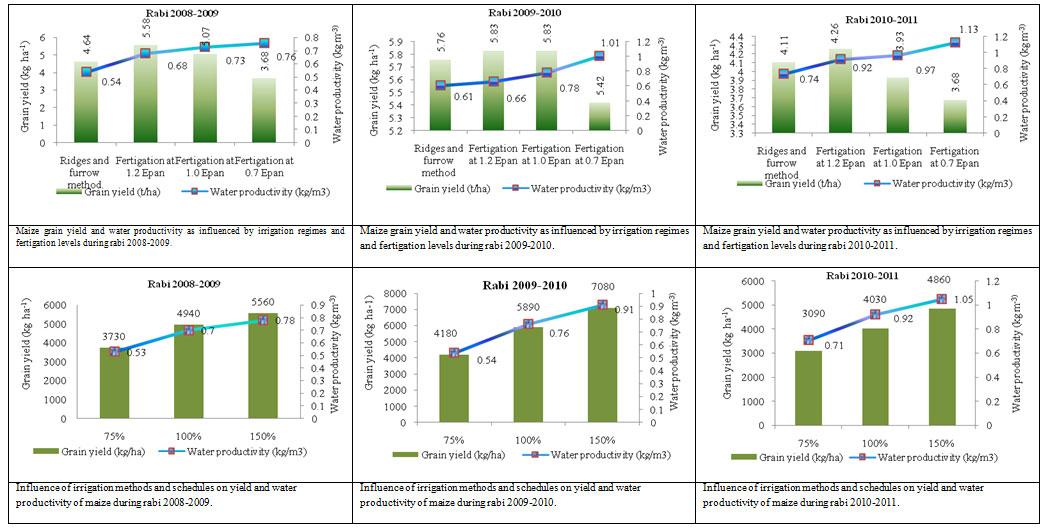 Table 2. Influence of irrigation methods and schedules on water productivity of maize

May be due to the leaching of nutrients away from the root zone as a result of the increasing amount of the irrigation water applied under the conventional ridge and furrow irrigation, which produced low yield, on the hand, the treatment at 0.7 Epan resulted in the lowest grain yield and exhibited a 20.0 % decrease in the grain yield compared to the conventional surface ridge and furrow irrigation. This means that the growth of plants might have stressed under the treatment at 0.7 Epan due to insufficient water supply. The higher grain yield obtained at 1.0 Epan with 150 % RDF of water soluble fertigation might be due to increased nutrient dynamics in the root zone and in plants under drip fertigation as documented by Mmolawa and Or (2000).

Meanwhile, the treatment at 0.6 Etc resulted in the lowest grain yield and exhibited a 46.4% decrement in the grain yield, compared to the control treatment. This means that the grown plants may be stressed under the treatment at 0.6 Etc due to insufficient water supply. The better growth of maize under drip might be attributed to better moisture availability, soil aeration and also crop did not experience stress during the crop growth period at 1.0 Epan irrigation schedule. This ultimately reflected better physiological activity in plant and there by increased plant height and dry matter production in turn higher grain yield. Similar findings were reported by Tulu (1998).

Water Use: The total consumptive water use of maize in different irrigation regimes scheduled varied from 483 – 852, 535 -945 and 326 – 551 mm in 2008-09, 2009-10 and 2010-11 respectively. During rabi 2010-11, it was relatively warm and dry there by the actual crop evopotranspiration demand is more than the decennial average resulting lower yields as consequence of mild stress.  In all the years of study the lowest total consumptive water use was associated with 0.7 Epan drip irrigation regime closely followed by drip irrigation at 1.0 Epan (Table 2). Drip fertigation regime at 1.0 Epan saved an average of 22 % of the water consumed compared to the control surface ridge and furrow irrigation (1.0 IW/CPE).

Table 3. Influence of fertigation levels on water productivity of maize

Irrigation scheduling under the drip fertigation is more efficient than the conventional surface ridge and furrow irrigation in maize crop in the sandy clay loam soil. For realizing optimum grain yields and the water productivity, it is recommended to irrigate the maize crop at  1.0 Epan for every 3 days and applying the recommended fertilizer dose of 150 % NPK through drip fertigation in semi arid conditions.