1B. Dhanalakshmi and 2S. Vijayalakshmi

Biofilms are species rich, partially due to highly effective powers of diffusion of the microorganisms and have wide tolerance to marine environmental conditions. Characteristically, the first organisms to respond to and convalesce from stress. The present study aims to isolate and identify the biofilm forming bacterial species, collected from surface water and substratum of the ship hull for four seasons (at Chinnamuttom fishing harbor, Southeast coast of India, during June 2015 to May 2016. Among the mean concentration of bacterial isolates of both water and substratum of the station, maximum in monsoon and minimum in summer seasons. Totally 16 isolates were obtained, based on the adherence property, 8 isolates from surface water and 8 isolates from substratum of the ship hull.

Nithya P, Dhanalakshmi B, Vijayalakshmi S. On the Diversity of Biofilm-Forming Bacteria in Chinnamuttom Harbor of Southeast India. Biosc.Biotech.Res.Comm. 2021;14(4).

In marine environment, the harbor waters provide a large diversity of living biomass (microorganisms) and complex mixture of prokaryotes and eukaryotes, which of the most, yet identified/or characterized (Boschker 2005; Biao et al. 2020; Antunes et al. 2020). In marine environment due to forceful opposition of space and living, all surfaces living or innate are susceptible to fouling which is directly related to the colonization and adherence of microorganisms leading to the formation of biofilm formation and bacterial adhesion (Chandran et al. 2020). According to Donlan (2002), the suspended particle surfaces tend to collect and concentrate nutrients by hydrophobic interaction and leads to bacterial colonization.

These colonization on interactive surface supposed to be one of the microbial survival tactics, for increased nutrients access, toxins and antibiotics resistance, and predation protection (Dang and Lovell 2000; Babich et al. 2021). For these advantageous, in submerged substratum, the bacteria are quickly colonized. Bacterial polysaccharides and proteins forms biofilms, and provides accessory to other unicellular fouling organisms (Dobretsov et al. 2013; Zheng et al. 2021; Georgiades et al. 2021)

The primarily colonizized bacteria move to or transported to a surface and involves in series of steps (Mayer et al. 1999; Guiamet and Gomez 2005). In any submerged fresh surface of marine system are predominantly colonized by bacteria and diatoms, such as Vibrio spp., E. coli, P. aeruginosa, Shewanella oneidensis and Bacillus subtilus to initiate the complex biofouling process. Bacterial colonization transpires by a two-step process beginning with reversible attachment to the substratum followed through irreversible adhesion. Bacterial growth is protected and supported by biofilms through reducing the effects of external hazards and disinfecting the materials in aquatic environment (Paul and Jeffrey 1985; Lee and Newman 2003; Omoike and Chorover 2004; Muhammad et al. 2020).

During the expansion of colonization on surfaces, bacteria overproduce extracellular polymeric substances (EPS) (Jayathilake et al. 2017). These polymers, particularly EPS, frequently designated to construct the biofilm matrix, serving as a multi-functional element for immobilization of cells, adhesion on the colonized surface, protection and enabling spatial planning of various species within the biofilm (Carvalho 2018). In some respects, biofilm formation smears to human beings in the remedy process of wastewater, degradation of recalcitrant and aquaculture. In other respects, biofilm processed on heat exchangers, pipelines, ship surfaces and other industrial strategies causes serious problems and consumes large amounts of time and money to removing it. Also, biofilm formed on entrenched materials has been related to microbial diseases.

For the isolation of bacteria, the collected samples were serially diluted and placed over Zobell’s marine agar standard spread plates, to isolate the Biofilm bacteria. Plating was done in duplicate and incubated at 37°C for 24 -48 hrs. Following incubation, the total number of Colony Forming Unit (CFU) was determined and morphologically different bacterial colonies were selected, purified and sub-cultured on nutrient agar slant supplemented with 2% NaCl. All the bacterial isolates were tested for observance property by inoculating them into sterile seawater containing glass cover slip. The cover slips were removed and stained with 0.4% crystal violet to determine the adherence of bacteria (You et al. 2007). Bacterial isolates which form a slimy layer on the cover slip were selected for further characterization (Yang et al. 2021).

For the morphological and biochemical characterization, the isolated biofilm bacteria characterized using various morphological, biochemical and molecular characters. Gram stain, acid fast stain, spore staining and motility tests were performed for preliminary identification of the isolate (Cappuccino and Sherman 1999). Morphological parameters include colony color and shape followed by biochemical tests as: Indole, Methyl Red, Voges Proskauer, Triple Sugar Iron (TSI) and Citrate utilization were analyzed. (The establishment of the genera and species present in the samples were identified according to their characteristics as outlined in Bergey’ s Manual of Determinative Bacteriology (Holt et al. 1994; Macfaddin 2000).

Diverse bacterial isolates in the present study were due to the nutritive water of harbor environment and interaction with substratum. The isolated biofilm bacterial strains in water and substratum samples indicate, that most of the isolated strains identified as gram negative in nature (Samrot et al. 2021). Among these biofouling bacterial isolates, Bacillus sp. is one of the predominant bacterial species followed by Pseudomonas sp. and others. In accordance to the present study, occurrence of bacterial strains, B. subtilis, Staphylococcus sp., Micrococcus sp., Salmonella sp., Vibrio sp. and Pseudomonas sp., were the biofilm bacteria involving in 128 types of biofouling process. Based on the hydrographical conditions the biotic organism abundance and biomass occur varies in marine environment (Lee and Newman 2003; Omoike and Chorover 2004; Udhayakumar 2010; Antunes et al. 2020). 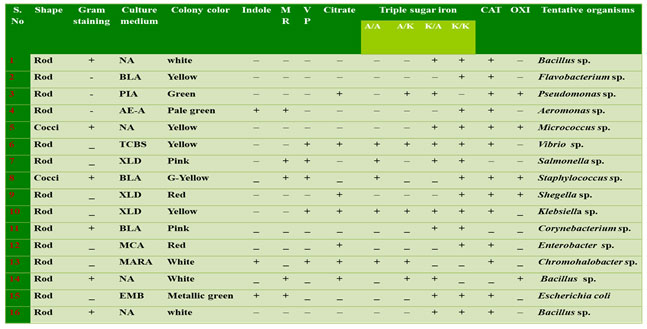 Motility test: In this present study, the twelve bacterial strains were confirmed as motile forms with a single polar flagellum or multi polar flagellum, remaining four strains was non-motile forms. The motile nature of all the strains was analyzed by commonly used hanging drop method which confirmed that among the 16 identified bacterial strains 4 strains were motile in nature (Figure 1) (Jain et al. 2020).

Bacterial Straining tests: The isolated bacteria were found both cocci and bacilli shaped. Among all the 16 bacterial isolates six gram positive and ten-gram negative bacteria based on absorption of dye in the cell wall of organisms (Table 1). The bacterial strains isolated from water and substratum of the ship hull showed that Gram-positive groups were dominant during all seasons, however, that Gram- negative strains are prevailing on both sites along the harbor environment. 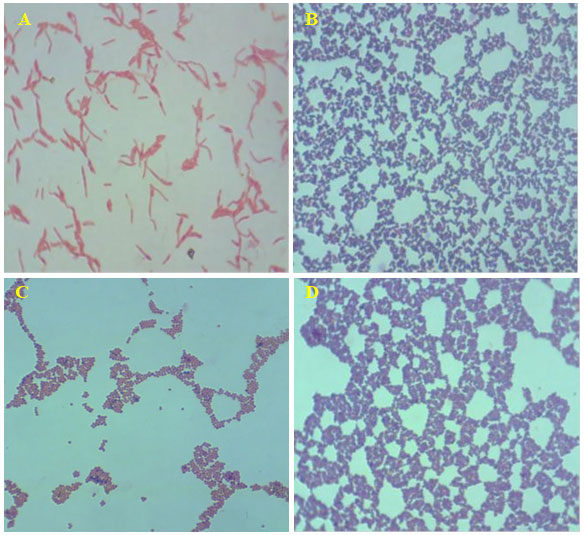 The biochemical test acid fast staining on the 16 isolate showed, bright red to intensive purple, Red, straight or slightly curved rods, happening singly or in small groups, may appear decorated Non-acid fast: blue color (Table 1) and the endospore staining revels the isolates are non-spore form bacteria. The biochemical and straining results revealed that changes in environmental conditions with any season could reflect the capacity of biofilm populations to maintain their diversified functions in an ecosystem. In addition, when observing at the genus/species level within the same phylum, dominances would be expected to change over time.

Triple sugar test: Table 1 showed the results of Triple Sugar Iron (TSI), from which these strains were isolated, and were alkaline reaction, red colour suggested no fermentation of sucrose or lactose or both and were Acidic reaction, yellow colour suggested to fermentation of lactose or sucrose. Among all isolates of bacterial strains only five bacterial species were positive to Voges proskauer (Vibrio sp., Salmonella sp., Staphylococcus sp., Klebsiella sp. and Chromohalobacter sp.) (Antunes et al. 2020).

Molecular identification: The genus confirmed strains were further subjected to 16s rRNA analysis. The sequenced four strains were similar with Bacillus amyloliquefaciens, Bacillus sp., Domibacillus indicus and Psudomonas sp. All the strains were unique to each other in their nucleotide base pairs. Since the strains were isolated from Chinnamuttam harbor environment the strains were named as Bacillus amyloliquefaciens- WS8. Bacillus sp., SS1. Domibacillus indicus – SS8. Pesudomonas sp –WS5 and GenBank accession numbers obtained after submission (Table 2). Based on 16S rRNA gene sequence alignment, the phylogeny tree of biofouling bacterial isolates was assembled with the neighbor-joining method (Dang and Lovell 2000; Babich et al. 2021).

The result from the well-supported phylogeny with high resolution inner branches and bootstraps suggests the existence of bacterial strains from Domibacillusaceae family. The bacteria of Domibacillus species were isolated and dominated in the sediment and water samples of Indian coast. The strains exhibited genetic similarity with genus and species of the Domibacillus indicus. The precise identification of bacterial isolates up to species level is vital since this gives an insight into the bacterial diversity. The identification of biofilm producing, as well as biofilm forming, bacterial isolates in this study was carried out by advanced molecular biology technique based on 16S rRNA gene sequence analysis (Babich et al. 2021).

Phylogeny Tree: A phylogenetic evolutionary tree shows the inferred evolutionary relationships among various biological species. The taxa joined in the tree were oblique to inclined from common ancestor. Unrooted trees proved the sprig lumps about ancestry at all. Figure 1 showed the phylogenetic tree of all sample are not similar sequences. 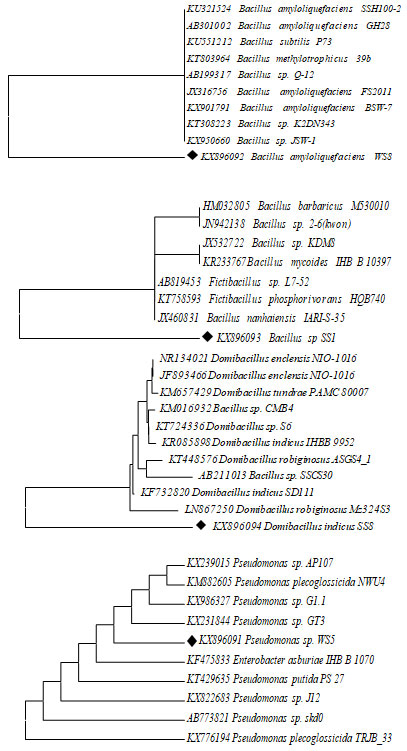 Based on 16S rRNA gene sequences, biofilm bacterial isolates were confirmed as Bacillus sp., and Pseudomonas sp. A molecular technique is one of the important techniques involving ribosomal RNA sequence analysis is commonly used to examine evolutionary interactions within different genera of bacterial isolates. Primary and secondary screening of Streptomyces strains identified by 16s-rDNA gene sequencing and also it has been confirmed that gene sequence data of specific strain with adjoining a parallel score of <97% represents a new species (Reller 2007). The bacterial isolate WS5 was observed as cream-colored circular colonies on Zobell agar medium. The result showed that non motile rod-shaped gram-negative isolate. Various biochemical characteristics of biofilm bacteria were used for their identification.

In the present investigation, it was found that the bacterial isolate was found to be positive results for citrate utilization, catalase and oxidase and negative results for Indole, methyl red, Voges Proskaur and it can acid and gas production form of negative results. It was reported the presence of Pseudomonas sp. Based on amassed whole 16S rRNA gene sequence alignment, the phylogeny tree of these culturable biofilm bacterial isolates was assembled with the neighbor-joining method. This method determines the presence of each bacterial isolate in the phylogeny with bootstrap support. The outcome from high resolution inner twigs recommends the existence of bacterial strains from Pseudomonadaceae family and only one from Enterobacteriaceae (Reller 2007; Babich et al. 2021).

The strains exhibited genetic similarity with genus and species of the Pseudomonas with the cases similarity up to 98% was found. It has been proving that genomic sequence data of separate microbe with a adjacent neighbor displaying a resemblance score of <97% characterizes a new species, the meaning of resemblance scores of >97% is not as clear. The bacterial isolate WS8 and SS8 was perceived as cream color circular colonies on zobell agar medium. The staining report exhibited gram +, rod shaped and motile cells but the strain of SS8 isolates were non-motile. In the present investigation, it was found that the bacterial isolate WS8 was found to be positive for Voges-Proskauer, catalase, oxidase, starch hydrolysis and reduction of nitrate and negative results for Indole production, citrate utilization and hydrolysis of urea. It was reported the presence of Domibacillus indicus (Reller 2007; Babich et al. 2021).

The findings of the present study shows that the increased physical parameters in summer may significantly influence to minimize chemical parameters and inorganic nutrients followed by less bacterial count in water and enhance high bacterial load during monsoon season. Hence, the diverse isolates of 16 various biofilm forming bacterial genera were characterized with morphological and biochemical methods. The study found most of biofilm forming bacteria were rod shaped. The seasonal tollerent and dominant species during study period in both water and substratum were Pseudomonas sp., Bacillus amyloliquefaciens, Bacillus sp., and Domibacillus indices, identified and further confirmed through molecular identification. Further investigation of relationship between specific biofilm forming bacterial mass in contrast with macro foulants accumulation and their adherent effect estimation are recommended.

Balcazar JL, Subirats J and Borrego CM (2015). The role of biofilms as environmental reservoirs of antibiotic resistance. Frontiers in microbiology. 6: 1216.

Kang J, Kang S and Kim Y (2015). Study on the control of marine biofouling developed on the surface of porous ceramics. Journal of the Korean Crystal Growth and Crystal Technology. 25(5):  218-224.