On the Bioactivity, Chemical Profiling and 16S rRNA-Based Phylogeny of
Nocardiopsis Species Isolated from the Gulf of Khambhat, Gujarat, India

Actinomycetes are well known sources of antibiotics, however; recently the focus of antimicrobial research has been turning towards actinomycetes of extreme environments. Therefore, present work would highlight the isolation, identification and characterization of antimicrobial metabolites produced by marine haloalkaliphilic actinomycetes. Saline soil sample was collected from Ghogha coast (Gulf of Khambhat), Bhavnagar, Western India. Isolation was carried out using selective media while identification was done based on morphological, cultural and molecular characterization. The antimicrobial potential was checked by spot inoculation method. Optimization was carried out by the one variable at a time (OVAT) method. The antimicrobial compounds were extracted using ethyl acetate and characterized by GC-MS.

The haloalkaliphilic actinomycetes Nocardiopsis sp. GhM-HA-6 was isolated from saline soil of Ghogha coast using starch agar with 10% w/v NaCl and pH 9 and was identified as Nocardiopsis sp. based on morphology, cultural characteristics and 16S rRNA phylogenetic analysis (NCBI Genbank Accession number: KF384492). The organism showed antimicrobial activity against five Gram positive and three Gram negative bacteria while the isolate didn’t show any antifungal activity. Results of optimization showed that the highest production of antimicrobial compounds was obtained using starch broth with 0.5% w/v starch, 1% w/v yeast extract, 10% w/v NaCl and pH 9. GC-MS analysis of ethyl acetate extract of the isolate showed presence of a total 18 compounds including various antimicrobial compounds like 2, 4-bis (1, 1-dimethylethyl)-Phenol, various types of alkanes and their derivatives. Haloalkaliphilic actinomycete Nocardiopsis sp. GhM-HA-6, from a rarely explored marine habitat, can be a source of antimicrobial compounds with the novel biotechnological applications.

Trivedi N.D, Thumar J.T. On the Bioactivity, Chemical Profiling and 16S rRNA-based phylogeny of Nocardiopsis species isolated from the Gulf of Khambhat, Gujarat, India. from Hemidesmus indicus. Biosc.Biotech.Res.Comm. 2021;14(3). Available from: <a href=”https://bit.ly/3xTSzOK”>https://bit.ly/3xTSzOK</a>

Actinobacteria are well known for their ability to produce valuable secondary metabolites such as antibiotics and antimicrobial substances. Amongst genera of actinobacteria, Nocardiopsis genus was primarily described by Meyer in 1976 and was placed in the class of Actinobacteria; subclass Actinobacteridae; order Actinomycetales and family Nocardiopsaceae (Ibrahim et al. 2018). Rainey et al. (1996) defined a new family referred as Nocardiopsaceae considering phylogenetic position, morphological features, and chemotaxonomic properties of Nocardiopsis sp.

Actinobacteria are widely found in soil and physiologically extreme environments such as desert, saline, hyper saline, and alkaline origins. Particularly, Nocardiopsis species are often found from hyper saline environments such as soda lakes and salterns along with Streptomyces species (Mwirichia et al. 2010; Jose and Jebakumar 2012; Kamjam et al. 2017). It is believed that Nocardiopsis genus might be playing a mediating role in breakdown of naturally occurring complex polymers, these species mainly produce extremozymes, compatible solutes, and surfactants (Bennur et al. 2015).

Among the nine maritime states in the Indian peninsula, only a few states have been extensively covered for the study of marine actinobacteria for antagonistic properties against different pathogens (Sivakumar et al. 2007). The Gulf of Khambhat is a coastal region situated in the Bhavnagar District of the Indian State Gujarat, which covers approximately 3120 km2 area of mudflat with some rocky (sandstones) intertidal area and a volume of 62,400 million m3 (Ramnathan et al. 2002; Subramani and Sipkema 2019).

Alang and Ghogha coasts of Gulf of Khambhat, India is relatively less explored with respect to antagonistic properties of actinomycetes. Ghogha is a small town situated at the mid-western shore of the Gulf of Khambhat, covering about 4 km long area (21°40’32” to 21°41’18” N and 72°17’5” to 72°16’48 E) in Bhavnagar, Gujarat with unique characteristics of having sandy supratidal zone, rocky-muddy middle intertidal zone and highly muddy lower intertidal zone (Solanki et al. 2016; Subramani and Sipkema 2019).

The uniqueness of this region is its salinity and alkalinity, which harbors various unidentified, unique haloalkaliphilic bacterial species that can potentially produce secondary metabolites. This highlights the urgent need for exploration of untapped locations for novel antimicrobial antagonist producers. In the light of this knowledge, the present study was intended to isolate, screen and characterize the antimicrobial metabolite producing haloalkaliphilic actinomycetes from the Gulf of Khambhat.

The haloalkaliphilic actinomycete, Nocardiopsis sp. GhM-HA-6 was isolated from saline soil of Ghogha coasts (Gulf of Khambhat), Bhavnagar (Longitude: 72° 11′ E and latitude: 21° 46′ N), India and treated with calcium carbonate and Ringer’s solution. Approximately 10-15g of wet soil sample was mixed with a pinch of calcium carbonate and was dried at 75°C overnight. Next day, 1g of soil sample was added to 10ml of Ringer’s solution. From the supernatant, 0.1 ml of the sample was spread separately on starch agar (Hi-Media, India), containing 10% w/v NaCl and pH 9. The plates were incubated at 30°C; on the sixth day a typical chalky white colony was appeared, the colony characteristics were noted and Gram’s staining was performed.

On the seventh day, colony was picked up and re-streaked on starch agar slants supplemented with 10% w/v NaCl and pH 9 to ensure the purity of the colony (Chakrabarti 1998). The culture was maintained at 4°C. The molecular identification of the isolate was carried out by 16S rRNA gene sequencing. The 16S rRNA gene was amplified using universal primers 518F 5’ccagcagccgcggtaatacg3’ and 800R 5’taccagggtatctaatc3’. PCR products were purified and sequenced. The resultant sequences aligned within the NCBI database (National Centre for Biotechnology Information) using BLASTN.

The test organisms were grown in nutrient broth at 37○C for 24 hours. The molten nutrient agar, with 1% activated test culture, was poured on the sporulated Nocardiopsis sp. GhM-HA-6. After the incubation of 24 hours at 37○C, the zone of inhibition was measured for each test organism. To achieve the highest production of antimicrobial compounds, effects of various growth conditions were studied by the one variable at a time (OVAT) method.

The effect of various media (starch broth, starch casein broth, actinomycetes broth, glucose asparagine broth, glucose glycine broth, soybean malt broth and complete broth with 10% w/v NaCl and pH 9), effect of starch as a carbon source (0-1.5% w/v), effect of yeast extract as a nitrogenous source (0-1.5% w/v), effect of NaCl (0-15% w/v) and effect of pH (8-11) on the production of antimicrobial compound was checked.  All the flasks were incubated at 300C for 7-8 days. Then the cell free filtrates of the culture were collected from all the flasks separately and were tested against the actively growing sensitive culture of S. flexneri by agar well diffusion method.

The isolate was cultivated in starch broth with 10% w/v NaCl and pH 9 on a rotary shaker (120 rpm) at 37○C for 8 days. The cell-free extract was obtained by filtration of broth culture using Whatman No. 1 filter paper. Equal volume of ethyl acetate was added to the culture filtrate for the extraction of the bioactive compounds. The mixture was added to 250 ml glass flask, sealed with a cotton plug, followed by aluminum foil to reduce evaporation of the organic solvent and placed on a shaker for 2 hours at 150 rpm.

Post agitation the mixture was transferred to a separating funnel to generate different layers; the organic layer that contained the secondary metabolites and the aqueous layer. The crude extract was obtained by concentrating the solvent by evaporation and stored at 4○C for further use. Identification of the chemical compounds present in the crude ethyl acetate extract of Nocardiopsis sp. GhM-HA-6 was carried out by Gas Chromatography-Mass Spectrometry (GC-MS) analysis.

Isolation and Morphology of the Organism: Nocardiopsis sp. GhM-HA-6, a haloalkaliphilic actinomycete, was isolated from the Gulf of Khambhat, Western India. The isolate was characterized on the basis of its cell and colony morphology and Gram’s reaction. The colonies were small sized, round shaped, regular, slightly raised, rough, and opaque. It was Gram-positive, having a filamentous, long thread-like structure. It started sporulation on starch agar after 3 days of incubation with a fluffy mass of spores (Kumar et al. 2018). 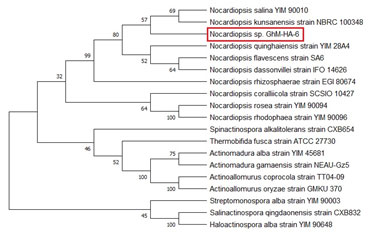 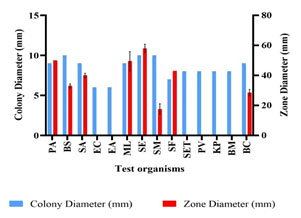 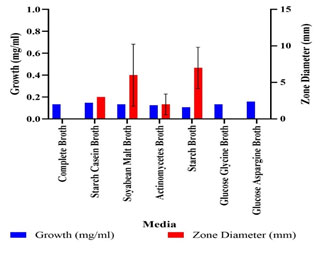 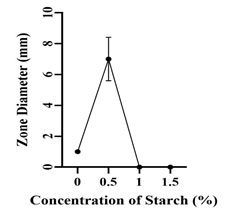 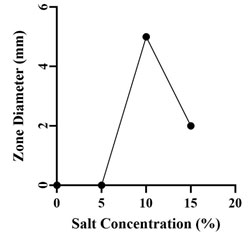 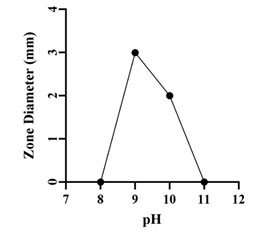 Identification of Bioactive Compounds by GC-MS Analysis of Ethyl Acetate Extract: Identification of the bioactive compounds, present in ethyl acetate extract, was carried out using GC-MS analysis. The GC-MS chromatogram of the Nocardiopsis sp. GhM-HA-6 crude extract showed a total of 18 peaks (Figure 8). When compared with the NIST database, the nearest compound hits for those peaks were found (Table 1)

The declining trend in the discovery of new antimicrobial compounds and the enigmatic development of antibiotic resistance in bacteria has increased the need for scientists to search for novel antimicrobial compounds (Genilloud 2017; Durand et al. 2019). Microbial life can be found in the most diverse conditions, including extremes of temperature, pressure, salinity, pH, nutrient concentrations, water availability and presence of high levels of radiations, harmful heavy metals and toxic compounds such as organic solvents and hydrocarbons (Thumar and Singh 2008; Durand et al. 2019Subramani and Sipkema 2019).

Ability to sustain under extremity makes them an interesting system to study the biochemical and molecular basis of adaptations, besides biotechnological aspects (Sharma et al. 2012). In the light of this knowledge, we should explore new habitats in order to identify novel actinobacterial isolates and bioactive compounds. Recently, extremophilic actinobacteria have attracted the researchers with the hope that these organisms would add an inventive dimension to naturally available antimicrobial products research (Zitouni et al. 2004; Vijayakumar et al. 2012; Dhanasekaran et al. 2014; Sharma et al. 2020; Rathore et al. 2021).

Significant studies have not been conducted so far in the Gulf of Khambhat. Therefore, the present study was intended to isolate, screen and characterize antibiotics producing haloalkaliphilic actinomycetes from the Gulf of Khambhat. Nocardiopsis sp. GhM-HA-6, a haloalkaliphilic actinomycete was isolated from the Ghogha site of Bhavnagar district. The isolate was identified as Gram-positive, filamentous, long thread-like structure containing, spore forming actinomycete based on cell and colony morphology and Gram’s staining while molecular characterization confirmed the isolate as Nocardiopsis sp. GhM-HA-6 (Rathore et al. 2021).

The isolate showed the highest similarity with Nocardiopsis salina YIM 90010 (98.46%) and the lowest similarity with Actinomadura gamaensis (90.61%). The isolate was able to inhibit the growth of total eight test organisms. The antimicrobial compounds produced by the isolate were more effective against Gram-positive bacteria as compared to Gram-negative bacteria while the isolate didn’t show any inhibitory effect against fungi. Among all selected test organisms, the highest sensitivity was observed against Shigella flexneri, the intestinal tract pathogen. Sharma et al. (2016) checked the broad-spectrum antimicrobial activity of forest derived soil Actinomycete, Nocardia sp. PB-52 and this study results were quite comparable with it (Sharma et al. 2016; Nithya et al. 2018).

The findings of the present study indicated that Nocardiopsis sp. GhM-HA-6, isolated from the Ghogha site, inhibited the growth of various test organisms including Staphylococcus epidermidis, Pseudomonas aeruginosa, Shigella flexneri, and Staphylococcus aureus. The ethyl acetate extract of Nocardiopsis sp. GhM-HA-6, indicated the presence of potent antimicrobial compounds such as Phenol-2, 4-bis (1, 1-dimethylethyl) – which can further be purified and used for the treatment of various known and unknown infections. In nutshell, our findings in this field will surely be a significant contribution to the knowledge of compounds unique from marine bacteria as potential sources of new drugs in the pharmacological industry.

This study was financially supported by the Department of Biotechnology (New Delhi, India) (DBT Sanction Order No.: BT/Bio-CARe/03/596/2010-11).

Kroppenstedt RM and Evtushenko LI (2006) The family Nocardiopsaceae. The Prokaryotes: A Handbook on the Biology of Bacteria Springer-Verlag 3(3) 754–95.