Investigations on Bacterial Load in the Rural and Urban Indoor and
Outdoor Environment of Gwalior, Madhya Pradesh, India

Comparative analysis of airborne bacterial load in the rural and urban indoor and outdoor environment is of utmost importance to evaluate the wellbeing hazards linked with co3ntamination of airborne bacteria in the indoor environment. The present study was conducted during December, 2020 to March, 2021 among 50 randomly selected rural and urban (Adupurajagir and Gwalior, respectively) dwellings to determine the indoor and outdoor bacterial load. The mean load of 562.35 CFU/m3 airborne bacteria was recorded in the indoor environment of a modular kitchen in Gwalior city. The mean load of 2593.75 CFU/m3 bacteria was recorded in the indoor environment of the traditional kitchen in Adupurajagir village. In addition, bacterial load of respectively 1215.13 CFU/m3 and 783.03 CFU/m3 was calculated in the open space at both study sites. Based on morphological characteristics five bacterial species (spp.) were identified Staphylococcus aureus spp, Bacillus spp, Coagulase-negative Staphylococcus spp, E-coli spp, and Micrococcus spp.

Copyright © This is an Open Access Article distributed under the Terms of the Creative Commons Attribution License (CC-BY) https://creativecommons.org/licenses/by/4.0/, which permits unrestricted use distribution and reproduction in any medium, sources the original author and sources are credited.

It has been investigated that pathogenic bacterium like Staphylococcus aureus (methicillin resistant) and Pseudomonas species were nosocomial infections in nature and developed multi-antibiotic drug resistance which may be accountable ineffective cure (Kunwar et al. 2019). Therefore, indoor air can be more polluted and harmful in terms of health issues including upper respiratory infections (URI) and lower respiratory infections (LRI), etc., over outdoor air (Baldacci et al. 2015; Kim et al. 2018; Smith et al. 2000). Though indoor environments are believed to be safer, but they can pollute with micro-pollutants when their load raised from recommended parameters than associated with outdoor exposure.

A sampling of bioaerosols is a well-known technique to find out the bacterial load, as it permits a significant evaluation, hence the results were evaluated in the form of colony forming unit per cubic meter (CFU/m3). According to the National Institute of Occupational Safety and Health (NIOSH) and the American Conference of Governmental Industrial Hygienists (ACGIH) the recommended parameter of the total count of bioaerosols is 1000 CFU/m3 and the culturable total number of bacteria is 500 CFU/m3 (Cox and Wathes 2020).

The present study was accomplished from December, 2020 to March, 2021 among 50 randomly selected dwellings from rural (Adupurajagir village) and urban (Gwalior city) to compare indoor and outdoor airborne bacterial load to analyze the relationship between high bacterial load with the physical environment and cooking pattern of rural and urban people. Therefore, traditional and modular kitchens were selected from rural and urban dwellings respectively as indoor and their open space as outdoor environments. Gwalior is a major city in Central India in the state of Madhya Pradesh. The city is located at 26.22ο N latitude and 78.18ο E longitudes, 300 km from Delhi. Adupurajagir village is located in the Gwalior districts of Madhya Pradesh. The village is located at 26.113491ο N latitude and 78.226425ο E longitudes (Fig. 1).

Figure 1: Areas in (a) Adupurajagir village and (b) Gwalior city where airborne bacterial
samples were collected. (Source: https://www.google.co.in/maps). 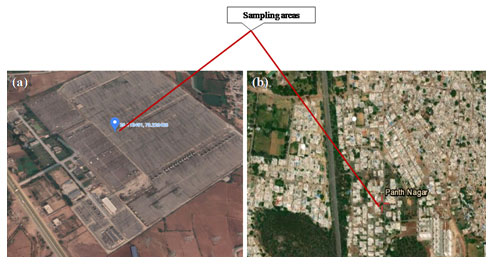 Bacterial samples were collected from the kitchen and open space in morning cooking hours at 9.00-11.30 am. The passive air sampling technique was used, the Petri plate was placed at the center of the sampling area for 1 hour, 1 meter away from the wall, and 1 meter above the height of the human breathing zone (1/1/1 standardized method) (Bolookat et al. 2018; Andualem et al. 2019). Physical parameters such as thermal condition, humidity, and ventilation framework were recorded. To minimize the mixing of outdoor bacterial samples, all ventilations were remained closed and movement of inhabitants prohibited during the indoor sampling.

At the time of sampling, other microbial safety measures were followed (Napoli et al. 2012; Sharpe et al. 2020). After sampling all samples were transported on the same day without any delay to the CTR (Centre for Translational Research) laboratory, Jiwaji University, Gwalior, and incubated at 37 οC for 24-48 hours. Bacterial colonies growing on culture media were expressed and calculated in the form of colony forming unit per cubic meter (CFU/m3) by applying the equation Andualem et al. (2019).

Based on microscopic examination, purification by sub-culturing for another 24-48 hours at 37 οC on the same culture media was used to attain pure culture isolates. The identification of the obtained colonies was based on gram staining and their colony formation characteristics such as shape, size, opacity, and color (Becerra et al. 2016; Mirhoseini et al. 2016). A light microscope was used to assess the morphology of bacteria at 100X magnification under oil immersion. The bacterial generic identity was achieved based on the taxonomic classification (Goodfellow et al. 2012).

One way ANOVA test results was demonstrated to differentiate the mean airborne bacterial load among study sites. Whereas the sum of square between groups was 285805.8 and within groups was 22612981 and total number of mean square was 115951.8 estimated. The ANOVA test reflected that there was a significant mean airborne bacterial load difference among study sites at p < 0.001 with total degree of freedom was 299 (Table 2). 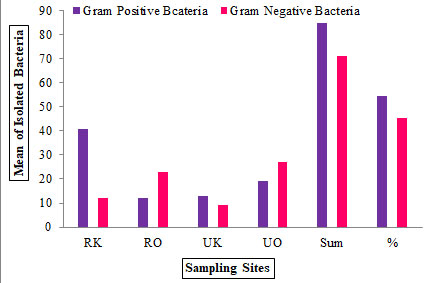 Figure 3: Percentage of isolated gram +ve and gram -ve bacteria on
the basis of their cellular shape (n = 156). 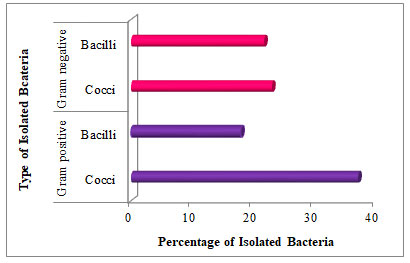 Micrococcus spp can cause pneumonia, septic shock, meningitis, and endocarditis. Conversely, Staphylococcus aureus is gram +ve bacteria that may cause disease symptoms through the production of toxins for example food poisoning, human dermis infections, pneumonia, bone infections, urinary tract infections, and diarrhea. Bacillus spp can stay alive in the harsh environmental conditions in the air due to its ability to form spores and show resistance against common disinfectants which are used in daily disinfection practice in dwellings.

This gram +ve bacterium may be found on dirt particles and paper. Its presence on dirt particles in the air may consequence in settling on food or food contact surfaces, hence ensuring its survival in the kitchen and posing a possible threat to women and their children (< 5 years old) because of determined sex disparities across many proportions, women’s household works such as cooking may be more exposed than men’s (Kotgire et al. 2020).

In addition, improper cleaning and poor infrastructure (ceiling, mud walls, roof made by wood or leaves, short height of roof, and gap between wall and roof) were observed during sampling in the traditional kitchen among dwellings of Adupurajagir village, which may lead to serious bioaerosol infectivity of food such as queasiness, vomiting, diarrhea, wound, and central nervous system (CNS) infections and people with the weakened immune system are prone to Bacillus spp. E-coli is the most abundant species in the hospital environment however, in this study it was isolated from the kitchen environment among Adupurajagir village and Gwalior city also.

This gram -ve coliform bacterium of the family Enterobacteriaceae commonly lives in the human intestine. People inside the dwellings among both study sites may be exposed to E-coli from contaminated food and water due to poor hygienic practices were observed. Most strains of this bacterium are not harmful but some strains are contagious by produce toxins that cause illnesses such as septicemia, neonatal meningitis, bloody diarrhea, urinary tract infection, and gastroenteritis. Coagulase-negative Staphylococcus spp is referred from gram +ve (Kotgire et al. 2020).

This species is commonly found as a food-associated saprophyte and also present on the human dermis and mucous membrane. Overcrowded dwellings with poor ventilation framework found in Adupurajagir village. It was observed that villagers believe in living in joint families rather than nuclear families, which is considered to be the main basis of Coagulase-negative Staphylococcus spp occurrence within sampling sites. Coagulase-negative Staphylococcus spp is identified as is one of the main pathogens of nosocomial infection also shows methicillin resistance in nature and developed multi-antibiotic drug resistance which may be responsible for the ineffective treatment.

Findings say that most of the bacterial species are airborne in the residential environment associated with the human dermis. All identified bacterial species have colonized all the sampling sites within the dwellings (Table 3). It should be considered that all the isolated bacterial species are identified as highly infectious and disease-causing or opportunistic pathogenic. Future research would help to find out the possible source of the subsistence of pathogenic bioaerosols within the kitchen and outdoor environment of the dwellings (Magd et al. 2020; Kotgire et al. 2020).

The difference amongst the bacterial load of indoor and outdoor environment at the study sites due to the microclimatic variations, construction material, vehicular pollution, outdoor levels, and daily household activities. The bacterial load of the outdoor environment in these settings reflects the variation of biological sources and the geochemical processes affecting indoor and outdoor relationships of airborne bioaerosols (Nasir et al. 2012; Magd et al. 2020).

Taking the account into consideration, the impact of physical factors of the indoor environment of rural kitchens may significantly affect the spread of diseases, as the lungs of exposed persons are more susceptible to infections due to heavy microbial load. In addition, relative humidity and poorly ventilated indoors also affect their health. There is no prominent evidence but the above-mentioned conditions which are analyzed in rural kitchens might influence the spread of dangerous coronavirus due to the poor health conditions and the increased load of aerosols. Recent research also confirmed that the number of positive cases varied between indoor and outdoor environments among rural and urban areas. Therefore, the indoor environment without a ventilation framework with increased temperature may be more vulnerable to the spread of coronavirus infection among residents (Magd et al. 2020).

Conflict Of Interests: Authors declare that they have no conflict of interests.

Colbeck I and Whitby C (2019). Biological Particles in the Indoor Environment Issues in Environmental Science and Technology Pages 127–157.

Fujiyoshi S, Tanaka D and Maruyama F (2017). Transmission of Airborne Bacteria across Built Environments and Its Measurement Standards: A Review Frontiers in Microbiology 8.