Dental Management in a Child with Ectodermal Dysplasia: A Case Report Along with Review

Ectodermal dysplasia (ED) is a rare hereditary syndrome that is categorized by the nonstandard development of certain tissues and structures of ectodermal origin. This disorder is important to dentists because it affects teeth and results in hypodontia or anodontia. Young children who are affected by ED and anodontia face functional and aesthetic difficulties due to the deficiency of teeth. Restoring lost vertical dimension and teeth with a removable prosthesis improves speech, aesthetics, and appearance and thus boosts the patient’s self-confidence.

We report a case of hypohidrotic ED with an  oligodontia (absence of all primary teeth except upper second primary molars) in a 5-year-old female patient who was successfully rehabilitated with conventional removable dentures in the maxillary and mandibular arches using multidisplinary approach. The goal of the treatments was to improve psychological development in addition to promoting aesthetics, speech, and eating effectiveness, as well as the overall improvement of the stomatognathic system.

Previouslay, most of the ED cases were treated with removable prosthesis, either in form of partial pr complete removable prosthesis in both maxilaary as well as mandibular arches. This type of prosthesis were allowed for relaining and rebasing as most of the ED patients were receiving treatments during youn ages. Those days, with the improvements of dental materials and equipments, treatments with over denture implants were introduced to replacement of missing teeth that caused by ED.

Ectodermal dysplasia (ED) syndrome is a rare heterogeneous group of inherited disorders that share main defects in the development of two or more tissues derived from the ectoderm (Ul Bari and Ber Rahman 2007). Clinically, ED can be broadly classified into hypohidrotic (X-linked recessive) and hidrotic (autosomal inherited) types. Anhidrotic (hypohidrotic) ED, also known as Christ–Siemens–Touraine syndrome, is the utmost common ED (80%). It affects males and is inherited from female carriers.

It is a triad of sparse hair (atrichosis or hypotrichosis), abnormal or missing teeth (anodontia or hypodontia), and inability to sweat due to the lack of sweat glands (anhidrosis or hypohidrosis) (Naveen et al. 2012; Ladda et al. 2013 Mascolo et al. 2018). Defects in materials originating from other embryologic layers are not unusual. These disorders are congenital, diffuse, and nonprogressive (Ul Bari and Ber Rahman 2007). Patients with ED have a normal life expectancy and intelligence (Al-Araimi et al. 2019 Wimalarathna et al. 2020).

However, if ED goes unrecognized in early infancy, hyperthermia due to the lack of sweat glands may lead to brain damage or death. Anodontia, which represents the congenital absence of all teeth in the primary dentition and/or the permanent dentition, is a rare dental manifestation that associates with ED  (Chugh et al. 2016; Al-Araimi et al. 2019). Vaidya et al. (2013), observed EDs in 11 patients over two generations in one family.

Severe teeth abnormalities; mild fingernail deviations; and toenail abnormalities were seen in all the patients and were considered as abnormalities that affected individuals in a one family. Many case reports have been published worldwide. Table 1 provides a summary of the studies, including the following information: author(s) names and year of publication, country and family history, gender, age, arches involved, teeth present (primary or permeant), dental abnormality associated (if any), treatment received by the patient, and other associated clinical manifestations (Al-Araimi et al. 2019).

The lack of teeth and special appearance are reported as the major concerns of patients with ED. The sequence and type of treatments differ from patient to patient. However, it is important ti address address  the complaints of most patients with ED which include restoring function, speech, facial appearance, and tooth aesthetics by normalizing the vertical dimension and supporting the facial soft tissues. This case report describes a multidisciplinary approach for dental managnent of a child with ED which involved pediatric dentistry and  prosthodontic specialties.

A 5-year-old female patient reported to the Department of Pedodontics and Preventive Dentistry, College of Dentistry, Sanaa University, Yemen. Her chief complaints were the absence of teeth in the oral cavity, the dryness of the mouth, and difficulty during eating. On general and extraoral examinations, the patient presented the classical triad of hypohidrosis, hypotrichosis, and hypodontia. Apart from these manifestations, the patient presented dry skin, very thin eyebrows, thin brittle nails, saddle nose, thick everted depressed lips, nasal bridge, and sunken cheeks with prominent supraorbital ridges.

The lower third of the face was shorter than the middle and upper thirds (Fig I A–C). Intraoral examination revealed a large tongue and complete anodontia in both arches (except for the two primary second molars in the maxillary arch) (Fig 1D). Radiographic examination revealed the presence of thin and resorbed bone in both arches and two maxillary primary second molars (Fig 2A).

Figure 2: Panoramic View of the patient (A), an alginate impression for maxillary arch (B).

Treatment options were discussed with prosthodontic colleage and the parents.The preferred treatment option was a removable prosthesis (partial removable denture for the maxillary arch and removable complete denture for the mandibular arch). At this appointment, oral prophylaxis was performed for the two existing maxillary teeth, then maxillary and mandibular alginate primary impressions were taken (Fig 2B). From these impressions, a study cast (Fig 3A) was poured, and then special maxillary and mandibular custom tries were prepared for the final impression (Fig 3B).

The final impressions of the maxillary and mandibular arches were recorded accurately after border molding by using medium-viscosity elastomeric impression materials. After the beading and boxing of the final impressions, the casts were poured with an improved die stone for increased strength and abrasion resistance (Fig 4A). Then, the maxillary and mandibular occlusal rimes were prepared (Fig 4B). Subsequently, jaw relation was done in the conventional manner, and tooth arrangement was done with acrylic resin teeth and was followed by the final try-in of the waxed dentures (Fig 4C–E).

Finally, the wax dentures were processed with a heat-polymerized denture base resin (Fig 5A-B). The complete dentures were delivered, and the patient was instructed on the maintenance of oral hygiene and dentures. Extraoral photographs after the insertion of the dentures were taken (Fig 5 C–E). Recall appointments were done after 1 week and 3 and 6 months for adjustments if needed.

Figure 3; Max and Mand master caste (A), Occlusal rimes on the casts (B), right, left,
and frontal views after arrangement of teeth and before to teeth try-in (C-E). 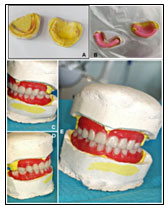 Figure 4; Processed denture is ready for insertion (A-B), extra-oral
photographs after insertion of the dentures (C-E) 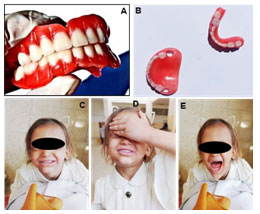 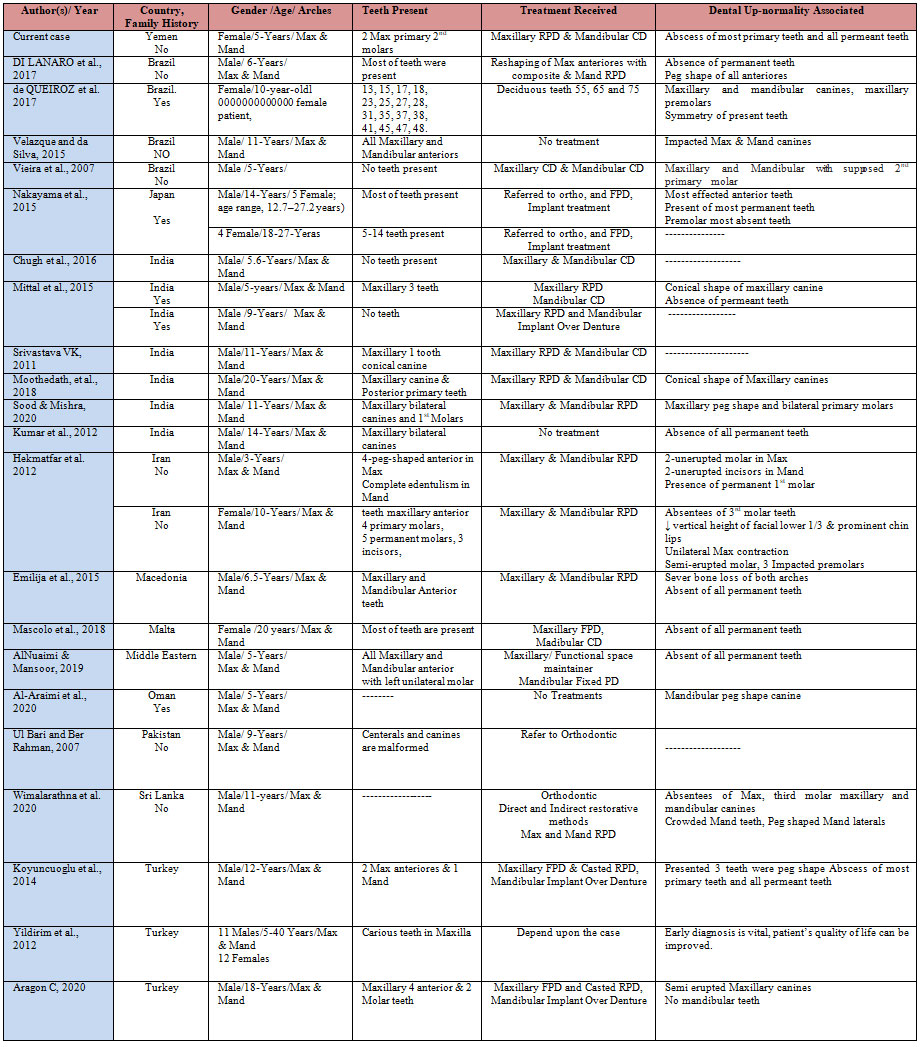 Our patient is a 5-year-old female Yemeni with oligodontia caused by ED. She was managed by the fabrication of a maxillary Removable partial denture (RPD) and mandibular Complete Denture (CD). With this prosthesis, occlusion, masticatory function, aesthetics, speech, and overall quality of life were restored. The early replacement of missing teeth results in a positive effect on growth and aids in restoring masticatory function and aesthetics; maintains healthy supporting tissues and speech; and boosts the patient’s self-esteem, thus improving the patient’s overall quality of life (Murthy and Vaze 2010; Al Nuaimi and Mansoor 2019).

The use of RPD will allow relining in the future given that the growth of the patient is continuous. It accommodates jaw growth in both arches, reduces the cost and frequency of remaking the prosthesis, and maintains typical oral occupations, thus resulting in an overall improvement in aesthetic outcome (Vieira et al. 2007; Murthy and Vaze 2010; Al Nuaimi and Mansoor 2019).

The clinical expression of ED depends on the structures and organs that are affected during embryonic development. In the present case, a female with ED exhibited several abnormalities that included the skin, scalp, body hair, gland, finger- and toenail, craniofacial, oral, and tooth abnormalities. The facial characteristics of young patients disturb their emotional condition and social life. Therefore, the management of orofacial and teeth abnormalities has a positive effect not only on masticatory and phonetic functions but also greatly influences the aesthetics and self-confidence of the patient and considerably increases their social confidence, self-esteem, and quality of life (Aragon 2020; Wimalarathna et al. 2020).

A pedodontist, maxillofacial surgeon, orthodontist, prosthodontist, and speech therapist should be involved in the treatment of such patients. Malformed, decayed, or stained teeth should be managed with composite materials (Patel et al. 2010; Prithviraj et al. 2014; Mittal et al. 2015). In patients with ED, establishing the correct maxillo–mandibular relations and the normal function of the dento–facial system (chewing, swallowing, and speaking) is important. Prosthodontic treatment has a major effect on aesthetics and functions, facilitates psychological development, and improves the emotional condition and social life of the patient (Mittal et al. 2015; Mascolo et al. 2018).

Alginate hydrocolloid (irreversible hydrocolloid) impression material is used for primary impression and sometimes for final impressions with special trays because it is considered as clean, biocompatible, and pleasant for the patient. In addition, this material has a short setting time and thus causes limited discomfort to the patient and can be easily removed from the undercut area presented by malformed teeth (Wimalarathna et al. 2020).

Although no absolute time for the start of treatment exists, Pigno et al. (1994), stated that an initial prosthesis should be provided before the patient reaches school age. Kupietzky and Houpt (1995), reported that a Removable Denture RD can be fabricated for a patient as young as 3 years old. As the child grows, the RD has to be modified and substituted because longitudinal studies on anodontia have indicated that the growth of both jaws is independent of the presence of teeth.

At least three replacements are needed between the period of early and late mixed and permanent dentition. When the patient is in the last period, the RD may be replaced with a fixed-type restoration by using osseointegrated implants. Guckes et al. (1991), recommended that this approach should be postponed till the age of 13 because of possible implant movement caused by jaw growth (Guckes et al. 1991; Pigno et al. 1994; Kupietzky and Houpt 1995; Wimalarathna et al. 2020).

This clinical report describes the types, characteristic features, and treatment options for a young female patient with ED. With proper multidisplinary  treatment, the patient can enjoy a relatively normal life. The options for a definitive treatment plan may include implant-supported fixed or removable prosthesis singly or in combination (Murthy and Vaze, 2010). New alternatives, such as the use of implants, for the rehabilitation for children with hypohidrotic ED must be carefully considered given the presence of underdeveloped, thin alveolar bones, and age (Vieira et al. 2007; Mascolo et al. 2018; Al-Araimi et al. 2019).

The findings of this study suggests that a multidisplinary management of ED should be considered as  this multisystemic disorder affects numerous parts of the body. Early analysis is vital for taking essential preventive actions and enhancing the patient’s quality of life. This review and case report contributed to the information on ED and to the education of undergraduate students and general dentists. The treatment was supported in accordance with the patient’s requirements and support (symptomatic management depending on the affected ectodermal structures).

Dental professionals play a vital role in contributing to the overall appearance and wellbeing of the affected patients. From the physical, emotional, social life, aesthetic, speech, and psychosocial standpoint, early prosthodontic treatment is of great importance to patients with the systemic condition of missing teeth. The psychological environments of the parents and the patient were highly improved particularly with simple and conservative prosthodontic therapy being the rational, reasonable, acceptable, and cost-effective option. Maxillofacial surgery, implant placement, and fixed prosthesis, which will provide results with increased comfort and aesthetics, could be considered later on when the patient have completed skeletal growth.

Conflict of Interest: Authors declares no conflicts of interests to disclose.