Memecylon umbellatum, M. edule, M. talbotianum, M. malabaricum, and M. wightii species belong to the family Melastomataceae. The genus is well-known traditional medicinal herb used to treat skin diseases. The goal is to compare the metabolite makeup of the five Memecylon spp. and to evaluate the extract’s anti-inflammatory and antiprotease activities. UPLC-ESI-QTOF-MS was used to profile untargeted metabolites in a water/methanol extract, followed by statistical analysis with PCA and HCA. Anti-inflammatory and antiprotease activity were determined by inhibiting soybean 15-lipoxygenase and Protease. Phenols and flavonoids are the most abundant secondary metabolites in Memecylon spp. Principal component analysis (PCA) was used to identify marker chemicals from five species, tocopherol, isorhamnetin 3-glucoside, isothalic acid, stearoylglycerol, and pyrrolidine.

The Memecylon spp. maybe clustered into two groups based on principal component analysis, with M. malabaricum & M. wightii clustered together and M. umbellatum, M. edule, & M. talbotianum forming another clustered. The anti-inflammatory (Soybean 15-lipoxygenase inhibition) and antiprotease activities (Trypsin and thrombin Inhibition) of crude extracts suggested that M. malabaricum and M. talbotianum extracts exhibited higher inhibition compared to the other three species.  These data suggest that differences in metabolite profiles might be connected to differences in the bioactivity of the five plant extracts examined. The untargeted UPLC-ESI-QTOF-MS technique is efficient for identifying bioactive components of Memecylon spp.

The extract of Memecylon spp leaves has antioxidant, anti-diabetic, antibacterial, and anti-inflammatory activities. The biochemical analysis and inductively coupled plasma-mass spectrometry were performed on the fruits of M. grande, M. randerianum, and M. umbellatum, it was discovered that they were rich in phenolic, alkaloids, flavonoids, and terpenoids, as well as various trace metals (Sree et al. 2021). GC-MS study of M. Umbellatum contained α-Tocopherol, Campesterol, Stigmasterol, β-Sitosterol, β-Amyrin which a potent inhibitor of enzymes related to diabetes, steroid metabolism, and cancer (Perumal et al. 2021).

According to the literature review and prior research, Memecylon spp exhibits a wide range of biological activities. Screening of metabolites based on activity from biochemical assays and standard isolation methods results in the identification of just a few biomolecules. As a result, in the current work, a high number of potentially bioactive compounds were identified utilizing MS, untargeted metabolite composition profiling, compound identification, and multivariate statistical analysis of the five Memecylon spp. (M. wightii, M. talbotianum M. umbellatum, M. edule, and M. malabaricum) was performed. Anti-inflammatory using Soybean 15-lipoxygenase (LOX-15) and antiprotease using trypsin and thrombin inhibition was conducted to investigate the potential anti-viral bioactivity of Memecylon spp.

were gathered from the Western Ghats of India in April-May 2014 and authenticated (voucher specimens #IOELP0001a, #IOELP0002, #IOELP0001h, # IOELP0003, # IOELP0004). Fresh leaves were collected, washed with distilled water, and then immersed in liquid nitrogen. For the extract’s preparation, Memecylon samples that had been frozen and crushed were lyophilized (Telstar, Thermo scientific).

16 mL of Hydro-methanol [80:20 (v/v)] was added to 0.5gm of lyophilized Memecylon samples and kept in a sonicator for 30 minutes at room temperature. In a round bottom flask, the supernatant was collected after centrifugation for 15 minutes at 4000 rpm. A rotary evaporator was used to evaporate the solvent under vacuum at 40°C. 500 ul of Hydro-methanol was added to the dry residue and vortexed to completely dissolve the extract. The extracts were filtered and kept at 20oC using a 0.2 m syringe filter.

For the MS analysis, the LC system was connected to a Waters Acquity Series UPLC/SYNAPT G2 HDMS (Milford, MA, USA) with electrospray ionization for qualitative analysis of the metabolites. At a drying temperature of 350oC, the nebulizer pressure was 60 psi, and the nitrogen flow rate was 10 L/min. A 5ul aliquot of the hydro-methanol extract of leaves was evaluated following the protocol described in previous studies (Stark et al. 2015). The data was analyzed, and the correct mass was determined using MassLynx 4.1 SCN 9.16 (Waters, Manchester, UK).

The pentapeptide leucine enkephaline (m/z-554.2615) was used to lock mass in a solution (1 ng/L) of MeCN/0.1 percent HCO2H (1:1, v/v). Progenesis QI was used to handle the raw data of all samples and replicates acquired from MS analysis. The following peak picking settings were used: all runs, limits automated, sensitivity 3, and retention time limits 0.59 minutes. An ANOVA with a p-value of 0.05 and a fold change of 2 was used to filter data. The matrix was analyzed using PCA and Pareto scaling after the data was transferred to EZinfo. Hierarchical clustering analysis was carried out using neighbor-joining and Pearson’s coefficient matrix (HCA) (Deng et al.

2014; Martucci et al. 2014; Ramu et al. 2016). Soybean 15-lipoxygenase (LOX-15) was used in the anti-inflammatory experiment. Inhibition experiments employing 0.2 M linoleic acid as the substrate and product in a solubilized form in 0.2 M borate buffer (pH 9.0) were used to evaluate the loss of soybean -LOX- 15activity (5g). A UV-Vis spectrophotometer (Beckman Coulter, DU 730 Life Sciences) was used to record inhibition tests in the presence of various doses of extracts (20 to 40 g/ml) and quercetin is used as a reference.

The IC50, or the concentration required to block LOX-15 activity by 50%, was also calculated. (Rackova et al. 2007).For protease inhibition assay, the substrate N-benzoyl-DL-arginine-paranitroanilide hydrochloride (BApNA) was dissolved in DMSO (20 mg/mL). Enzyme Stock solution was prepared by dissolving 2 mg each of trypsin and thrombin was in 10 mL of 1.0 mM HCl.  The enzymes (0.3 mL) and 100 µ L of plant extracts in the concentration range of 10 to 50 g/mL were incubated at 37oC for 15 minutes subsequently, 0.6 mM substrate was added and volume was adjusted to 2.5 mL with Tris buffer (100 mM, pH 7.5).

The reaction mixture was incubated at 37°C for 30 minutes. The enzyme reaction was stopped by adding 100 uL of 30% acetic acid. Phenyl methane sulfonyl fluoride (PMSF) was employed as a positive inhibitor. A UV/Vis spectrophotometer was used to detect absorbance at 410 nm (Jedinak et al. 2010; Ramu et al. 2015).

All five Memecylon spp. included marker chemicals such as α-tocopherol, Pyrrolidine, 1-stearoyl-, Stearoylglycerol, and isorhamnetin 3-glucoside (Table 1). The variations in chemicals found from one species to the next may, however, be reflected in the PCA analysis, indicating that all five Memecylon spp. are differentiated from one another. Some of the compounds identified from Memecylon spp. such as Kaempferol-3-Glucoside-3-Rhamnoside, isorhamnetin 3-glucoside, Quercetin-7-O-rhamnoside, tiliroside, Myricetin are also reported by several other workers in several medicinal plants such as Bidens pilosa, Cucumber,  Citrullus lanatus (Chiang et al. 2004; Abu-Reidah et al. 2012; Abu-Reidah et al. 2013).

Multivariate PCA analysis: By using an ANOVA with a p-value of 0.05 and a fold change of 2, the number of compounds utilized for PCA was reduced, resulting in the PCA shown in Fig 2. The repeatability of the UPLC-ESI-QTOF-MS profiling approach was confirmed after analysis of each species in three replicates revealed a satisfactory clustering of each duplicate in the vicinity. The PCA result revealed that the greatest differences were found between all five Memecylon spp. along PC1, but that all five Memecylon spp. could be clearly distinguished along PC2. In addition, hierarchical cluster analysis (HCA) (Figure 1) demonstrates that M. umbellatum, M. edule, and M. talbotianum clustered together (Świątek, et al. 2021).

The chemical constituents present in different Memecylon spp. differ significantly when metabolite profiling and multivariate analysis results are compared but grouping in PCA and HCA analysis showed that plants like M. umbellatum, M. talbotianum, and M. edule are grouped together, as are M. malabaricum and M. wightii. The grouping is in accordance with to morphotypes as described by Saldhana (1996) and Gamble (1967) in their floras. 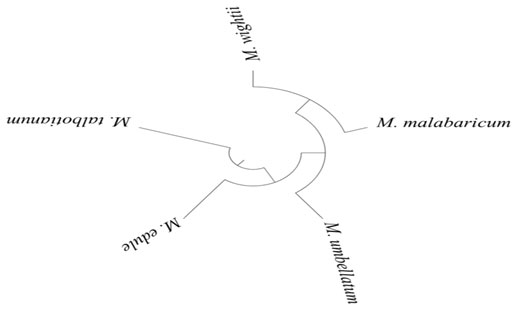 Quercetin was utilized as a control, with a 95.7 % inhibition in a 40 g/reaction concentration and an IC50 of 20 1.2 g for LOX. The reference standard PMSF had an inhibitory activity of 84.8 % at 50 g/reaction concentration and an IC50 of 97% 1.2g/ml for trypsin and thrombin. Data were expressed as mean ± SD (n=3). Antiprotease activity was found in hydro-methanol extracts of five Memecylon spp. at 50 g/mL, hydro-methanol extract inhibited trypsin and thrombin in the range of 55 and 83% for trypsin and 53 and 80% for thrombin, respectively.

The hydro-methanol extracts of M. malabaricum and M. talbotianum had the greatest antiprotease activity, with trypsin activity of 68% and 83% and thrombin activity of 66% and 80%, respectively (Table 2). M. malabaricum and M. talbotianum hydro-methanol extracts had the strongest anti-inflammatory and antiprotease efficacy compared to other Memecylon spp. extracts. Crude methanol leaf extracts of Memecylon spp. substantially suppressed the LOX and COX in vitro (Bharathi et al. 2014; Aliter and Al-Horani 2021).

Herpes simplex viruses stimulate thrombin synthesis to make cells more susceptible to infection via a process requiring PAR1-mediated cell regulation (Sutherland et al. 2007). Thrombin was also discovered to exacerbate the inflammation caused by the influenza virus. In reality, influenza viruses can cause thrombin production, which can lead to platelet activation-mediated lung inflammation (Keller et al. 2006). Human metapneumovirus and respiratory syncytial virus, two enveloped, negative-sense, single-stranded RNA viruses that cause respiratory infections, have also been connected to thrombin. Thrombin was shown to promote the replication of these viruses and to aggravate the accompanying inflammation in these experiments (Aliter and Al-Horani 2021).

The findings of the present study have shown that the UPLC with ESI-QTOF-MS approach is a viable chromatographic method for denoising and identifying phytochemicals from the genus Memecylon. The use of Waters Progenesis QI software to analyze the data resulted in the discovery of more phytoconstituents in the plant extracts than could have been discovered using the method used. The results obtained using ESI-QTOF-MS, PCA, and HCA show that the discovered molecules may be linked to variations in bioactivity of the plant species. This study validates the ethno-medicinal use of Memecylon spp in the treatment of skin diseases mainly viral infection.

The mass spectroscopic facility and services were provided by the Institution of excellence, Vijnana Bhanvan, University of Mysore.

Abu-Reidah, I. M., Arráez-Román, D., and Segura-Carretero, A. (2013). Profiling of phenolic and other polar constituents from hydro-methanolic extract of watermelon (Citrullus lanatus) by means of accurate-mass spectrometry (HPLC–ESI–QTOF–MS). Food Research International, 51, 354-362.