The current study is the first comprehensive investigation to address the native chicken ecotypes of the Taif region to unravel the genetic diversity using a dense panel of 40 microsatellites (SSR). Blood samples were collected from 25 hens randomly sampled from a village farm at Taif governorate. A total of 147 alleles were detected, with an average of 3.7 alleles per locus. The overall mean of polymorphic information content (PIC) was 0.43. The average observed heterozygosity (Hobs) of 0.28 was lower than the expected heterozygosity (Hexp) of 0.48. Out of 40l ocionly11 loci showed insignificant deviation from Hardy Weinberg expectation.

The ecotypes showed low genetic diversity (HS = 0.65) and a high level of inbreeding (FIS= 0.75). The high FIS is indicative of the endangerment potentiality of this ecotype. Nine SSR showed an inbreeding coefficient of one. The significant estimate of the inbreeding coefficient of the present study calls for an immediate breeding plan to preserve such endangered ecotypes. Results of the present study will provide an initial guide to design further investigations for the development of sustainable genetic improvement and conservation programs for the Taif ecotype genetic resources.

The importance of chicken ecotypes is not only limited to the rural economy and smallholder livelihood but also important in the maintenance and conservation of genetic sources. These ecotypes have been locally adapted for decades. Raising local ecotype/breed, in other words indigenous, is preferred because of their small cost of production and their adaptability to harsh environmental conditions. Also, it has special significance particularly in remote areas where they consider as a source of revenue for underprivileged families. The adaptive privilege they gained over time allowed them to survive harsh local conditions including scarcity of water and food, and disease epidemics (Muchadeyi et al., 2007, Nxumalo, 2020, Habimana et al., 2020).

Ecotypes represent a valuable genetic resource as they have been used as a framework in diversity studies. Although many definitions are proposed for ecotypes, however, the most common description of ecotypes is the exclusive population that adapted to their local environment and represents a reservoir for genes affecting productive adaptability. For instance, native chicken in Saudi Arabia carries different heat tolerance genes which are crucial in hot climate zones and has the potential in breeding programs. Almost a quarter of local chicken breed populations are globally classified as endangered, hence their genotypes could be lost (Morrison, 2012, Strillacci et al., 2017, Radwan, 2020).

Preservation of these genetic resources comprises a comprehensive knowledge of activities related to the identification, and documentation of native breeds. The importance of ecotypes as evolutionary conservation objectives emerges from their ability to exhibit phenotypic differences in relation to environmental heterogeneity. Many studies have investigated ecotypes in village chicken populations. Indigenous chicken at Taif governorate (1700 m above sea level) are well adapted to the harsh environmental conditions of high altitudes (Muchadeyi et al., 2007, Rudresh et al., 2015, Abdel-Hameed and Bazaid, 2017).

Elevation above sea level is generally known for extreme environmental conditions, including low oxygen content, reduced partial pressure of oxygen, and temperature fluctuations. The genetic makeup of Taif ecotypes is understudied with very limited information available on its adaptability. Advances in molecular markers applications have given a reliable opportunity to evaluate genetic variation at the DNA level. One of the most widely used genetic markers for genetic diversity investigations is microsatellites (SSR). Microsatellites are commonly utilized in genetic diversity assessment since they are codominant, highly polymorphic, abundant, and highly reproducible (Groen et al.1994, Hillel et al., 2003, Huang et al., 2016; Nxumalo et al., 2020).

Such efficiency has made SSR markers the most common genetic markers for the assessment and characterization of genetic diversity in many commercial and indigenous chicken populations. Numerous SSR markers are accessible in chickens and have been used to construct linkage maps in many populations. The current study is the first to use a dense panel of microsatellites to assess Taif chicken ecotypes genetic diversity in an attempt to highlight the possible effects of inbreeding (Groen et al., 1994, Nones et al., 2005, Seo et al. 2013, Abebe et al., 2015, Nxumalo et al. 2020).

Microsatellite selection and genotyping: A total of 40 microsatellite markers were used for sample genotyping (Table 1). These markers were chosen according to the recommendation by Choi et al. (2015), details of SSR markers are provided in Table1. Polymerase chain reaction (PCR) was carried out according to Seo et al. (2013) and Ibrahim et al. (2015) in a final volume of 25 μL containing 1μL (20 ng) of genomic DNA, 12.5μL of Go Taq® Green Master Mix, Promega, USA, 1μLof each primer (20 pM), deionized distilled water (to a total volume of 25 μL). The PCR reactions were performed in C1000TM Thermo Cycler Bio-Rad, Germany, using the following conditions; initial denaturation at 94°C for 5 min; 40 cycles of denaturation at 94°C for 30 sec., primer annealing at 52°C for 45sec and primer extension at 72°C for 1 min; final extension at 72°C for 7 min.

The average number of allele/locus in the current study was lower than its native chicken counterpart reported in South Africa, Zimbabwe, Egypt, and Sweden. The polymorphic information content (PIC) is a common index to infer the allelic polymorphism. PIC ranged between 0.0 and 0.8 with an average of 0.43 (Table 2). Most of the studied loci (45 %) were highly informative (PIC> 0.50), while 32.5 % were reasonably informative (0.5 >PIC > 0.25), and only 22.5 % were slightly informative (PIC< 0.50). The relatively low PIC of the studied markers might be associated with the lower number of alleles per locus where 58% of the studied markers, 23 out of 40 markers, had a maximum of three alleles (Van-Marle-Koster and Nel, 2000, Muchadeyi et al., 2007, Ramadan et al. 2012, Abebe et al., 2015).

However, the majority of the SSR markers were adequate for the appropriate estimation of the genetic diversity of Taif ecotype populations.  The average PIC for SSR in Taif ecotype is lower than that of PIC obtained in different chicken breeds. For instance, Ramadan et al. (2012) reported an average PIC of 0.65 in Egyptian native breeds, while Seo et al. (2013) estimated the PIC of 0.77 in native Korean lines. Choi et al., (2015) reported a PIC of 0.68 in the commercial Korean breeds. One of the highest PICs reported in recent studies was obtained in Sinai and Norfa Egyptian native chicken breeds (PIC= 0.84) as reported by Soltan et al. (2018).

In the present study, about 18 markers had PIC exceeded 0.50 (Figure1) which is indicative of relative informativeness in studying genetic diversity. The observed proportion of heterozygosity (Hobs) ranged between 0.0 and 0.64 with an average of 0.28, Table 2. Hexp ranged between 0.68 and 0.24 with an average of 0.48. The elevated level of genetic diversity is a crucial factor for species’ constant survival and adaptability to a different environment. In the current study, Taif ecotype showed low genetic diversity Hobs compared to Hexp. The lower Hobs as compared to Hexp is indicative of the probable effect of random genetic drift and inbreeding that shaped Taif ecotype heterozygosity (Botstein et al., 1980, Ibrahim et al., 2015). 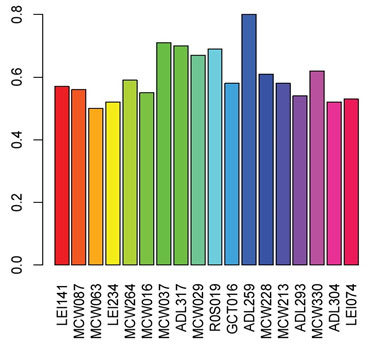 Different evolutionary forces may act differently on various parts of the genome, hence changing the magnitude of heterozygosity. Most of the studied loci showed significant deviation from Hardy Weinberg expectation (Table 3) which might be associated with one or more factors including inbreeding, presence of null alleles, and/or small sample size (Nei, 1978, De La Rua et al., 2001).

Table 3. Deviation from Hardy Weinberg equilibrium for 40 loci of native Saudi ecotype
(loci in HWE are typed in italics and P-values marked withNS).

Genetic diversity (HS) and coefficient of inbreeding (FIS) across 40 microsatellite loci of Taif ecotype are presented in Table 4. Genetic diversity represents the magnitude of genetic variability within the population. In the present study, HS ranged between 0.52 and 0.92 with an average of 0.75. Also, the coefficient of inbreeding (FIS) ranged between 0.10 and 1.00 with an average of 0.65. The FIS in the present study is higher than that reported in other local chicken breeds (e.g.,0.02 in Egyptian local breeds), 0.01in Korean local breeds, 0.19 in Swedish breeds, and 0.41 in Sinai and Norfa Egyptian chicken breeds (Ramadan et al., 2012, Seo et al., 2013, Abebe et al., 2015, Soltan et al., 2018).

Figure 2: Boxplot of gene diversity within a population (Hs) and coefficient of inbreeding
(FIS) across 40 microsatellite loci of nativeTaif ecotype, (lines above and beneath each
box refer to max and min values, line within each box refer to median value). 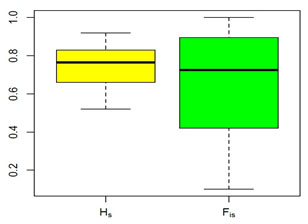 In the current study, a panel of 40 microsatellites markers were used to assess the genetic diversity of Taif ecotype chickens. All genetic diversity parameters showed average polymorphism level, yet high level of inbreeding. The current study highlights the significant magnitude of inbreeding in Taif ecotype that could severely impact trait fixation in the populations. The results of the current study may be used as an initial guideline to design further conservation programs for the development of sustainable genetic improvement plans for Taif ecotype conservation.