Cajanus cajan (L.) Millsp. commonly called Pigeon Pea a leguminous plant grown extensively for food, feed, fodder, fuel also grown as an intercrop and in crop rotation to improve the fertility of the soil in sustainable organic farming. This plant gets infected by the pathogen Fusarium udum causing wilt disease which is one of the major constraints in the production and productivity of pigeon pea. This pathogen is reported throughout the world infecting C. cajan. The extensive use of chemical fungicides results in environmental pollution, the resistance of pathogens towards fungicides, hazardous to humans and animals. This necessitated the need to adopt eco-friendly and sustainable management of diseases, like using antagonistic fungi against the pathogen. In our present study, 15 different fungal isolates were isolated from different rhizosphere soil and used for Our present study involved the in vitro – dual culture assay as well as in vivo – greenhouse bioassay was performed to analyze the antifungal efficacy of antagonistic fungi against F. udum.

The in vitro and in vivo investigations showed that Cephalosporium acremonium, Lasiodiplodia pseudotheobromae, Penicillium frequentans and Epicoccum sorghinum equally inhibited F. udum when compared to various Trichoderma spp. Also, under greenhouse conditions, the root length, shoot length, and the number of leaves of plants was found to be increased significantly (p ≤ 0.05) in treatments with the talc-based biopesticide formulations of the antagonistic fungi. Hence these fungal isolates can also be used as a potential biocontrol agent for sustainable wilt diseases management caused by Fusarium udum and the extensive usage of chemical fungicides can be avoided to control the wilt disease of Cajanus cajan.

Cajanus cajan is an important constituent in the category of pulses among all Indians due to the availability of 20-21% protein providing an energy-rich cereal diet. According to FAO statistics, this crop is cultivated in an area covering 4.6 million hectares globally and India accounted for about 73% of the global production in the year 2007. It is also an important crop of Karnataka contributing about 18% and 12% to total area and production respectively (GOI, Agricultural statistics, 2013). This protein-rich legume is prone to a multitude of diseases of which fungal diseases lead to a productivity loss of approximately 22 – 25 % each year amounting to a loss of up to Rs. 50,000 crores annually. Among the fungal diseases, Fusarium wilt disease caused by a soil-borne pathogen Fusarium udum (Fu) Butler is associated with extensive yield losses of pigeon pea in India. Fusarium species are common soil inhabitants that usually infect through roots and penetrates the vascular system of plants, causing wilt and substantially reducing yields due to their ability to survive in soil, plant roots, and dead plant debris for several years Saremi and Burgess (2000).

There is an increasing demand for controlling crop diseases in an eco-friendly way by using biological pesticides rather than the traditional way of using chemical pesticides.

The extensive use of chemical pesticides poses a negative impact on the environment as well as humans. They also are toxic to normal microflora of the rhizosphere Molli et al, (2015). Therefore, the use of biocontrol agents is promising in protecting the rhizosphere or spermosphere by inhibiting the pathogen (Marx, 1972) and by competing with the pathogen for limiting the growth nutrients (Chet, 1979; Couteaudier and Alabouvette, 1990). Scientists have studied the mechanism of biological control by antagonistic fungi and bacteria to control plant pathogens extensively in the past two decades (Janisiewicz et al. 2000). In our present study, we explore the possibilities to isolate a potentially promising biocontrol agent against wilt disease of pigeon pea.

For the isolation of pathogen from wilt infected C. cajan, the wilt infected plant samples were collected from the pigeon pea field of GKVK, Bangalore. Isolation of fungi from diseased root and leaves samples was done by standard tissue isolation method (Aneja, 2003). The isolated pathogen was subjected to pathogenicity assay by sick soil method to confirm the pathogenicity of the pathogen (Dehariya et al. 2015; Sumitra 2006); Nikam et al., 2011; Arunodhayam et al., 2014). The isolated pathogen was identified by morphological characteristics and the pure cultures of the pathogen were maintained on PDA slants and stored at 4oC (Leslie and Summerell, 1991).

For the isolation of antagonistic fungi, rhizosphere soil of wilt infected pigeon pea was collected. The obtained samples were processed and plated by a serial dilution method and pour plate technique (Aneja, 2003). All the plates were incubated for 5- 7 days at 21-240C. The pure culture of the fungal isolates was prepared, and they were identified using morphological characters up to species level using the keys as proposed by Joseph Gilman (1950) and Barnett (1998).  The isolates that were not able to identify through morphological characteristics were subjected to molecular characterization. 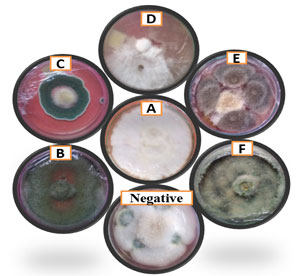 For the molecular characterization of Isolate-1, the pure cultures of Isolate-1 were obtained by placing the hyphal tip of the mycelia aseptically on sterilized Potato Dextrose Broth and was incubated at 24oC for 6-7 days. The extraction of genomic DNA from the pure cultures of both the isolates was performed by – Cetyl trimethyl ammonium bromide (CTAB) method (Ausubel et al., 1994). The Polymerase chain reaction of the obtained DNA was performed with universal primers for fungal genome, namely ITS 1 – (5′-TCC GTA GGT GAA CCT GCC G-3′) forward ITS 4 – (5′- TCC GCT TATTGATAT GC-3′) reverse primers. These primers were obtained from Chromous Biotech Pvt. Ltd. Bangalore, India. ITS region of rDNA was visualized by UV trans-illumination (352 nm) and the expected DNA band was excised from the gel using a sterile scalpel and placed into a 1.5 ml microtube.

This DNA was purified using gel extraction kit (Chromous Biotech Pvt. Ltd. Bangalore, India) according to the manufacturer’s specifications. The purified PCR product was sequenced at Chromous Biotech Pvt. Ltd. Bangalore, India. Sequences were determined by the chain termination method using an ABI 3130 Genetic Analyzer. Sequencing was done in the forward and reverse direction. The sequence was generated using data analysis software (Seq Analysis_ v 5.2). The obtained rDNA gene sequence was used to carry out BLAST with the database of the NCBI gene bank. Based on maximum identity scores first 10 sequences were selected and aligned using Multiple sequence alignment software program Clustal W2 to prepare Cladograms for the analyzed species. The rDNA sequence of an isolate was deposited in NCBI Genbank.

For the in vitro screening of antagonistic fungi against the pathogen, the dual culture method (Skidmore and Dickinson, 1976) was followed to analyze the degree of antagonism exhibited by 15 fungal isolates against the pathogen. The inoculated sets were incubated at 280C for 7 days. Triplicates of each test plate were maintained.

The degree of antagonisms of each bio-agent against the test pathogen in dual culture was graded on a scale of 1-5 as proposed by Bell et al., (1982) and the percent inhibition of radial mycelial growth of the pathogen was calculated using the following formula given by Singh et al., (2002).

Where, I- the percent inhibition

C – colony diameter in the control plate and

T- the colony diameter of the pathogen

For the preparation and biocontrol control studies of talc based biopesticides, antagonistic isolates, exhibiting a high degree of antagonism against the pathogen in vitro conditions, were chosen for preparing talc-based biopesticides. Solid substrate fermentation was followed for the production of talc-based biopesticide (Mukesh et al., 2015) (Fig 04). The efficacy of theprepared biopesticides was studied to control the wilt disease of pigeon pea. It was tested by sowing pigeon pea seeds into artificially made pathogen infested soil as described by (Bell et al., 1982). 2g each of the 12 prepared talc powder-based biopesticide was added to each pot containing pigeon pea plants with the inoculation of F. udum in triplicates. The number of leaves, root and, shoot length was measured in each pot along with negative and positive control and it was subjected to statistical analysis. 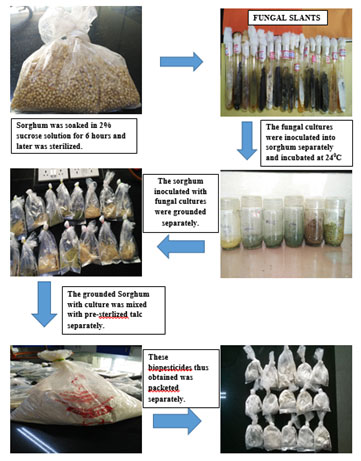 For the data collection and statistical analysis, the data of the results obtained from in vitro and in vivo studies were tabulated and these were subjected to statistical analysis by using MSTAT-C (Version 1.41) and Microsoft excel software. Analysis of Variance (ANOVA) of differences in the treatments and the least significance tests were carried out. Significance was evaluated at P<0.05 for the tests. For each factor analyzed, the means of the different treatments were compared and ranked using Duncan multiple range test at P < 0.05 using MSTAT-C (Version 1.41). The graphs were prepared using Microsoft Excel software.

(Fig 01) and its pathogenicity was proved by reisolating the pathogen from the artificially infected plants. Similarly, Dehariya et al., 2015 performed the pathogenicity assay for F. udum and successfully reisolated the pathogen from the diseased pigeon pea plant. Following this antagonistic fungal species were isolated from the rhizosphere soil samples were identified till species level based on morphological characters. Isolate-1 which could not be identified based on morphological characters was subjected to molecular characterization for precise identification of organism till species level (Pushpa et al., 2014).Isolate-1was identified as Lasiodiplodia pseudotheobromae as it showed 99% similarity with the sequence of L. pseudotheobroma deposited in NCBI- Genbank with the accession numbers – KP747702.1, KP872340.1, FN645637.1and FJ904834.1. The phylogenetic position confirms that our isolate corresponds to L. pseudotheobromae and that it would have been evolved from L. theobromae as per the cladogram obtained (Fig 03).

Table 1. Percent (%) Inhibition of growth of Fusarium udum and Fusarium oxysporum f. sp lycopersici by different fungal isolates and Grade Assessment for the interaction between the pathogen and antagonistic fungi

Means (n=3) in each column followed by the same letter are not significantly different (p<0.05) from each other according to Duncan’s multiple range test (DMRT) 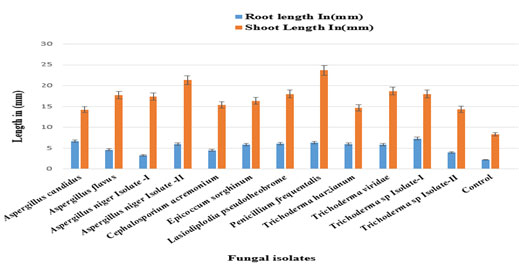 Means (n=3) in each column followed by the same letter are not significantly different (p<0.05)

from each other according to Duncan’s multiple range test (DMRT)

The use of fungi as biological control agents has found its deserving slot in the sustainable management of a spectrum of fungal and bacterial diseases in recent years. The use of biocontrol agents to combat fungal diseases has been magnified recently, due to the increasing negative environmental impact of hazardous chemical pesticides. The present investigation provides a detailed insight on the use of biological means for managing the wilt pathogen of C. cajan caused by F. udum both in vitro and in vivo. Though moderate growth inhibition activity was exhibited by L. pseudotheobrome and E. sorghinum, it was found that they could vigorously grow and overtake or suppress the growth of both the pathogens similar to that exhibited by all Trichoderma sp. which is referred to as hyper parasitism. These evidences prove that the wilt disease could be considerably reduced by the use of talc formulations of fungal antagonists. And also, that biocontrol agents other than Trichoderma sp. can be scaled-up for talc-based formulations and mass production of fungal biopesticides for controlling Fusarium wilt diseases of C. cajan.

We would like to thank the management of Gokula Education Foundation (GEF), Bengaluru for providing all the facilities and permission to complete this research.:

Dehariya K, Shukla A, Sheikh I A, and Vyas D. (2015) Trichoderma and Arbuscular Mycorrhizal Fungi Based Biocontrol of Fusarium udum Butler and Their Growth Promotion Effects on Pigeon Pea. J. Agr. Sci. Tech. 17: 505-517.

Janisiewicz WJ, Tworkoski TJ and Sharer C (2000) Characterizing the mechanism of biological control of postharvest diseases on fruits with a simple method to study competition for nutrients. Phytopathology. 90(11):1196-2000.

Odigie EE, Ikotun T (1982) In vitro and in vivo inhibition of growth of Phytophthora palmivora by antagonistic microorganisms Fitopatologia Brasileira. 7: 157 -167.