Polycystic ovary (PCO) is a condition in which the secretion of specific hormones is disrupted. The adrenal glands are essential for the manufacture of certain hormones and the monitoring of steroid concentration, and they may be impacted in PCO situations. In a PCO-induced rat model, the researcher was aimed to investigate how administering exogenous estrogen, estradiol valerate affected on adrenal gland secretions and histology. The effects of Matricaria chamomilla flowers extract, and metformin will also be evaluated. 24 rats were divided into four equal groups: 1- control group, 2- PCO group, 3- metformin group, 4- Matricaria chamomilla group. PCO was induced by injecting 2 doses of estradiol valerate. The findings revealed a considerable increase in estrogen and ACTH levels in the PCO rats. The concentrations of cortisol and aldosterone were likewise higher in the PCO rats.

These findings were corroborated by histological investigation of adrenal sections (both H&E and PCNA staining). Matricaria chamomilla flowers extract reduced all the hormonal alterations linked to PCO, including estrogen, ACTH, cortisol, and aldosterone. Metformin similarly reduced estrogen and ACTH. On the other hand, Metformin did not affect the hormonal changes associated with this model in terms of adrenal gland hormones (cortisol and aldosterone). In conclusion both treatments are improved that the histological investigation of adrenal secretions (both H&E and PCNA staining). The antiestrogen activity of Matricaria chamomilla could clarify that all the hormonal modulation occurs in this PCO model.

Alahmadi A. A. Biochemical and Histological Remodeling of Adrenal Glands Associated with Estradiol Valerate-Induced Polycystic Ovary in Rats: Guarding Effects of Matricaria chamomilla. Biosc.Biotech.Res.Comm. 2021;14(3). Available from: <a href=”https://bit.ly/3khouVG“>https://bit.ly/3khouVG</a

Polycystic ovary (PCO) is a condition in which the secretion of specific hormones is disrupted, which causing reproductive issues in women. Irregular menstruation, the development of ovarian cysts, and insulin intolerance are all common PCO problems. Estrogen is a hormone generated chiefly by the ovaries but also in minor amounts by the adrenal glands. It’s in charge of the formation of feminine sex traits.

The adrenal glands are essential for the manufacture of certain hormones as well as the monitoring of steroid concentration in the body, and they may be impacted in PCO patients. Recently, a PCO model was established in our lab via injecting estradiol valerate in rats.

The model was characterized by an increase in blood estrogen levels. Women with PCO have widespread hypersecretion of adrenal gland cortical hormones, including pregnenolone, 17-hydroxypregnenolone, DHEA, androstenedione, 11-deoxycortisol, and cortisol both at basically and after stimulation with adrenocorticotropic hormone (ACTH) (Azziz et al., 1998; Dumitrescu et al., 2015; Rosenfield and Ehrmann, 2016; Alahmadi et al., 2020).

Some reports, on the other hand, did not reveal similar disparities. Most studies haven’t looked at cortisol levels after estrogen replacement medication (Tsilchorozidou et al., 2003; Tock et al., 2014). It’s uncertain whether the use of exogenous estrogen therapy will affect the levels of various adrenal hormones. Chamomile (Matricaria chamomilla L.) is a widespread herbal medicine in Southern and Eastern Europe. It is a member of the Asteraceae family.

The purpose of this study was to look at the effects of injecting exogenous estrogen, estradiol valerate, on adrenal gland secretions and histology in a PCO-induced rat model. Furthermore, the impact of Matricaria chamomilla flowers extract, and metformin were assessed.

Animals: In the current study, twenty-four adult, virgin female Wistar rats were used. They obtained from the King Fahad Research Centre at King Abdullah University in Jeddah, Saudi Arabia. Their body weight varies between 186 and 208 grams. The research was conducted out under a conventional laboratory environment of temperature, humidity, and a 12:12 h light/dark cycle after a one-week acclimatization period. The animals were not subjected to any water or food restrictions. The research procedures were accepted by the Biomedical Ethics Research Council, Faculty of Medicine, KAU, Jeddah, SA, acceptance number, 168-19.

Induction of PCO: PCO was induced by administering two doses of estradiol valerate (0.2 mg each), one dose at the start and the other after six weeks of the experiment (Alzahrani et al., 2019; Farideh et al., 2010).

Collection of serum and adrenal glands samples: A cardiac puncture was used to gather blood samples. Adrenal hormones (cortisol and aldosterone), anterior pituitary hormone (ACTH), and estrogen levels were measured after the serum was extracted and kept frozen at -80°C. Both adrenal glands were removed and preserved in 10% buffered formalin for histopathological evaluations and immunohistochemical proliferating cell nuclear antigen (PCNA) expression.

Evaluation of histopathological changes (light microscope): Adrenal glands were preserved in formalin, fixed in paraffin wax, sectioned at 3–5 mm, and stained with hematoxylin and eosin (H&E).

Statistical interpretation of findings: GraphPad Prism version 5 was used to analyse the results, which included an ANOVA test and a Tukey’s multiple comparison test. At p 0.05, the results were considered statistically significant. 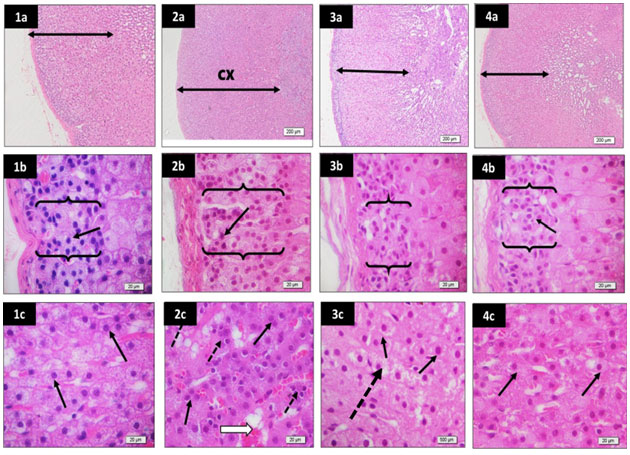 Sections from rat adrenal gland zona glomerulosa stained for PCNA show relative increase in zona thickness (double head arrows) in the PCO group (2) compared to the control group (1). Besides, the number of nuclei expressing PCNA looked to be more numerous (dotted arrows) (2). A mild or moderate decrease in nuclei expressing PCNA is observed in the metformin and Matricaria chamomilla groups (dotted arrows) (3 and 4). (5) A bar chart shows the number of PCNA positive cells in all groups.

The current study results showed a significant increase in the level of estrogen in the PCO model developed by exogenous estrogen injection. There was also a significant increase in the level of the ACTH in the PCO rats. It was also clear that the adrenal gland cortisol and aldosterone concentrations were increased in the PCO group. The histological examination (both H&E and PCNA staining) of adrenal sections confirmed these findings. Similar to this study findings, previous research showed an overproduction of various adrenal gland hormones, including cortisol, in PCO women (Azziz et al., 1998).

The researchers attributed this to the increased sensitivity of adrenal glands to the ACTH, 7α-hydroxylase, and increased cytochrome P450c17α. According to previous research, ladies with PCO were observed to have enhanced peripheral cortisol metabolism, which was linked to raised ACTH production in order to maintain optimal cortisol levels.

Numerous probable theories can describe how ACTH and cortisol levels were raised after estradiol valerate therapy. One probability is that estrogen treatment directly or indirectly impacted ACTH production from the pituitary gland, which encouraged cortisol release from the adrenal gland. In pregnant ladies, it is affirmed that the hypothalamic-pituitary-adrenal axis is activated, and hypercortisolism is recognized.

However, it appears that there is a mechanism behind the impact of Matricaria chamomilla other than regulating estrogen and ACTH, as metformin changes estrogen and ACTH but does not reduce cortisol and aldosterone levels, implying another mechanism that has to be investigated further (Yamada et al., 1996; Reis et al., 2006; Sotiropoulou et al., 2020; Leon et al., 2021).

The PCO model produced by estradiol valerate was linked to higher serum ACTH and estrogen levels. The PCO model also showed that cortisol and aldosterone levels of the adrenal glands were also increased. The hormonal alterations associated with this PCO model were altered by Matricaria chamomilla flowers extract, including estrogen, ACTH, cortisol, and aldosterone. These findings were corroborated by histological investigation of adrenal sections (both H&E and PCNA staining).

The author acknowledges Prof. Soad Shaker, Prof. of Histology, KAU, and Assiut University, Egypt, for reviewing the histological part of this manuscript.

Dennett C and Simon J (2015). The Role of Polycystic Ovary Syndrome in Reproductive and Metabolic Health: Overview and Approaches for Treatment. Diabetes Spectrum: A Publication of the American Diabetes Association 28(2): 116–120. DOI: 10.2337/DIASPECT.28.2.116.

Dumitrescu R, Mehedintu C, Briceag I, Purcarea VL and Hudita D (2015). The Polycystic Ovary Syndrome: An update on metabolic and hormonal mechanisms. Journal of Medicine and Life 8(2): 142–145. Available at: /pmc/articles/PMC4392092

Farideh Z, Bagher M, Ashraf A, Akram A and Kazem M (2010). Effects of chamomile extract on biochemical and clinical parameters in a rat model of polycystic ovary syndrome. Journal of reproduction & infertility 11(3): 169–74. Available at: https://pubmed.ncbi.nlm.nih.gov/23926485

Ndefo U, Eaton A and Green M (2013). Polycystic Ovary Syndrome: A Review of Treatment Options with a Focus on Pharmacological Approaches. Pharmacy and Therapeutics 38(6). MediMedia, USA: 336. Available at: /pmc/articles/PMC3737989.