Twenty-six different brands of bottled water were tested for bacteriological and physicochemical qualities in Nasarawa Local Government Area of Kano State, Nigeria. Bacteriological assessments have been used to outline the wide varieties of heterotrophic bacteria, overall coliform and faecal coliform. The chloride content, pH, temperature, conductivity, flouride content, total hardness and suspended particles have been additionally investigated. The coliform count ranged from 0 to 1000 coliform/100ml of the sample while the heterotrophic bacterial count ranged from 0 to 118 cfu/ml. In the bottled water samples, there was no faecal coliform and fluoride contents. The pH, temperature, conductivity, Chloride content, total hardness, and total suspended particles were all within acceptable limits between 6.50 and 8.30, 19.8 and 21.00C, 63.10 and 86.92µS/cm, 3.58 and 4.64 mg/l, 1 and 86 mg/l and 1.0 x 10-3 to 3.0 x 10-3 g/100ml, respectively.

Staphylococcus, Aeromonas, Klebsiella, Micrococcus and Bacillus were among the bacterial species found. For heterotrophic bacteria, total coliform and faecal coliform, 25 (96%), 24 (92%) and 0 (100%) of the 26 different bottled water samples met the standard respectively. For pH, temperature, conductivity, fluoride content, chloride content, total hardness and total suspended particles, all of the bottled water samples also met the criteria. According to the results of this study, 88.46 percent of the bottled waters tested were fit for consumption based on bacteriological and physicochemical factors. When producing bottled water, it is recommended that stringent criteria should be followed to ensure that the bottles are well capped, and that statistics including the producing date, expiration date and consignment number be imprinted on the bottles.

Despite decades of government efforts, safe and clean water supply in Nigeria’s urban areas remains objectionable. In most developing countries, the common method for delivering municipal-level, safe drinking water via treated pipe-borne water is woefully inadequate. (Othmani et al 2021), The importance of water quality to public health cannot be overstated. Water is responsible for the transmission of many infectious illnesses via the faecal-oral pathway. Drinking water-borne diseases claim the lives of approximately five million youngsters every years and sicken one-sixth of the world’s population (Yang et al 2021 Amanda et al 2022).

The significance and contribution of neighborhood produce low-fee opportunity ingesting water schemes to accomplishing sustainable get entry to in growing countries’ rural and urban settings can’t be over emphasized, particularly in the light of renewed global responsibilities to the Millennium Development Goals (MDGs) set for 2015.Bottled water is widely accessible, although it is out of reach for the majority of Nigerians. It is sold all over the country, and the best quality varies depending on the producer, raising concerns about the safety of certain of these items. The National Agency for Food, Drug Administration, and Control (NAFDAC) took the ingenuity to free Nigeria of soiled bottled and sachet water by mandating companies to chronicle with it so that it could monitor their activities, (Vanessa et al., 2021).

Given the lack of clean drinking water in Nigeria and the hot weather, sachet and bottled water sales persisted prominent in 2015 (Ugochukwu et al., 2017). In both urban and rural areas of Nigeria, a large percentage of households who do not have admittance to potable water. It is assumed that at least half of the populace purchases water on a day-to- day basis (Richard et al., 2021).

The increased availability of bottled water in the country necessitates an examination into the operations of the producers to evaluate the magnitude to which they adhere to the established standards. The Federal Government of Nigeria has spent a significant amount of money on basic health care in the last decade since many health workers have expressed concern about the increasing symmetry of dangerous water-borne infections like typhoid fever, diarrhea and measles (Moremi 2012). As a result, a small number of people have taken precautions by boiling and filtering their drinking water at home. In some families, however, drinking bottled water is a safer strategy to avoid contact with these infections.

Sample Collection:Twenty-six different brands of bottled water had been acquired from shops in Nasarawa and coded A to Z so that it will disguise the identification of the producers’ identities. The samples had been gathered and transported to the laboratory in smooth coolers, wherein they had been preserved at ambient temperature until they were needed.

Bacteriological counts of bottled water samples: The number of heterotrophic bacteria was estimated using a standard plate count (SPC). Bacterial cultures were grown on nutrient agar (Nawzat 2021 & Karissa et al., 2021). Using the 3-3-3 multiple tube fermentation regime, the total coliform count was determined. The culture was done in MacConkey broth. The number of significant tubes with acid and gas generation was recorded after incubation, and the most probable number (MPN) of coliform per 100ml of sample taken was calculated using the MPN index table (Karissa et al., 2021). Using the spread plate approach, the faecal coliform (E. coli) of the water samples was determined by Eosin methylene blue (EMB) agar. The number of E. coli colonies was reckoned and expressed as colony forming units per milliliter (cfu/ml) (Aneja 2014).

Characterization and Identification of bacterial isolates:The colony morphology, cellular features, and biochemical reactions of the bacteria were used to identify them (Veronica et al., 2020 & Shima et al., 2021). To acquire pure culture of the isolates, all colonies were sub-cultured from the mixed culture. The genuine isolates were then conveyed to sterilize nutrient agar slants and stowed in the refrigerator as stock cultures (Karissa et al., 2021).

Determination of physicochemical parameters: The pH of the sampled bottled water was evaluated using a pre-calibrated Denver pH meter model 20 (Karissa et al., 2021). The total suspended particles were estimated by weighing a pyrex beaker after it had been dried up in an oven at 105°C for 60 seconds (Nawzat 2021).

Determination of Temperature: All temperature of the bottle water samples had been measured using a simple mercury-in-glass thermometer calibrated in degrees Celsius, as defined by (Siti et al., 2021, (Muhammad  et al., 2021) and (Sheshe & Magashi 2014).

Determination of Fluoride: In a dry square sample cell, 10 ml of each water sample were placed, and 2cm3 of SPADNS reagent was added and mixed. After 30 seconds, the absorbance of the samples was calculated with a spectrophotometer (Nor Azlida et al., 2020).

Determination of Total Chloride: The total chloride was determined using an argentiometric titration, which entailed titrating 100 ml of distilled water with water was added of 5% potassium chromate as an indicator and 0.1 N AgNO3 as a standard. At the end, the solution changed the colour from yellow to pale pink (Sule et al., 2016).

Determination of Total Hardness: In a complexometric titration, total hardness was determined by titrating 100 ml of water with 0.1 N EDTA using Erichrome black-T as an indicator. The water sample was treated with 10 drops of 25% ammonia before the titration began. The purple color changed to a faint blue color at the end (Mica et al., 2021). 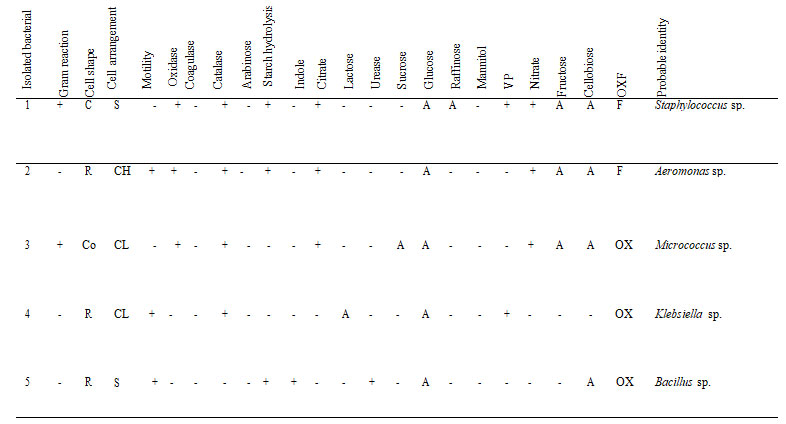 In terms of public health, the significance of safe and quality drinking water cannot be overstated. Some water-borne diseases such as dysentery, cholera, typhoid etc, have become far less common since the introduction of bottled water. All of the producers were successful in maintaining a faecal coliform count of zero in their goods. Furthermore, 24 bottled water brands (92.30 %) surpassed the maximum coliform limit for drinkable water of 10 per 100 mL of water WHO (2022). However, for 23 of the 26 varieties of bottled water, zero total coliform count was indorsed for emergency use, accounting for 88.46 percent of the entire coliform count (Bukar et al., 2015).

Klebsiella, Pseudomonas, Proteus sp., and Chromobacterium violaceum reported found from sachet water marketed in Samaru, Nigeria, according to (Ugochukwu et al. 2017). Coliform, Staphylococcus, and Pseudomonas were found in many kinds of bottled water sold in Ile-Ife, South Western Nigeria, by Igbeneghu and Lamikanra (Bukar et al., 2015). Non-carbonated bottled drinking water sold in Sri Lanka contained Klebsiella pneumoniae, Enterobacter cloacae, Pseudomonas aeruginosa, and Pasteurella haemolyticus (Igbeneghu and Lamikanra 2014). However, the three bacteria genera found in this study, Staphylococcus, Micrococcus and Aeromonas, suggest that bottled water is healthier than sachet water. Staphylococci and Micrococci are commensals that can be found on human skin, soil and other surfaces. As a result, they conquered the bacterial species isolated from the bottled water samples used in this study. Both water and soil have been shown to contain Aeromonas species (Herath et al., 2012).

Data of the present study  strongly suggest that the government should step up its efforts to monitor the fast growing water bottling industry in order to ensure that the public has access to safe and hygienic water. During the manufacturing process, manufacturers should strictly follow all good manufacturing practices (GMP) standards. Bottled water should also be explicitly labeled with an expiration date, authentic manufacturing date, batch number and bottles ought to be closed appropriately to avoid contagion. If any batch of brand fails to gratify regulatory criteria, regulatory organizations should then adequately notify the public. In such cases, the product should be withdrawn from the public. According to the findings of this study, In terms of bacteriological and physicochemical properties, twenty-four of the twenty-six diversities of bottled water samples assessed, 92% of the samples met the approved drinking water quality standards. As a result, the vast majority of bottled water sold in Nasarawa, Kano State is perfectly safe to drink.

Conflict of Interest statement: The authors have stated that there are no competing interest.