Antidiabetic Activity of the Bark of Indian Cherry, Cordia dichotoma

Cordia dichotoma Forst. has been used in the management of diabetes in traditional medicine. However, the antidiabetic activity of the methanolic extract of C. dichotoma (MECD) bark has not been reported so far. In this study, the antidiabetic activity of C. dichotoma was assessed in alloxan-induced diabetic Wistar rats. The acute toxicity study indicated that the MECD was safe up to the dose level of 2000 mg/kg body weight.  In oral glucose tolerance (OGT) test, the pre-treatment of MECD showed partial protection from hyperglycemia induced by a glucose load (2 g/kg, body weight) in rats at the dose levels of 250 and 500 mg/kg, body weight. The MECD significantly reduced the blood glucose levels in the alloxan-induced diabetic rats at the dose levels of 250 & 500 mg/kg, body weight as compared to normal control animals. Analysis of biochemical parameters and histopathological investigations also demonstrated the antidiabetic potential of the MECD with significant improvement of biochemical parameters including body weight, serum lipid profile and antioxidant enzymes/ biomarkers in comparison to the normal control. The activities of the MECD (500 mg/kg body weight) were comparable to some extent with that of the standard drug, glibenclamide (5 mg/kg). Our study scientifically validates the folkloric claim as well as traditional uses of C. dichotoma as antidiabetic medicine. It is suggested that the antidiabetic activity of C. dichotoma may be due to the presence of phenolic phytoconstituents or plant flavonoids in the methanolic bark extract.

Diabetes mellitus (or diabetes) is a chronic metabolic disorder characterized by hyperglycemia resulting from defects in insulin secretion, insulin action, or both. The chronic hyperglycemic condition of diabetes may lead to several health complications including cardiovascular (cardiomyopathy), neurological (neuropathy), renal (nephropathy) and ocular (retinopathy) (Junejo et al., 2020a; Junejo et al., 2020b). In diabetic patients, the hyperglycemic condition is mainly because of the decreased insulin secretion due to the abnormal functioning of insulin producing beta cells (present on the islets of Langerhans in pancreas) which thereby fail to produce enough insulin resulting in unstable blood glucose level followed by the occurrence of insulin resistance by metabolizing tissues (Tanwar et al., 2020; Yeh et al., 2003).

The prevalence of diabetes is increasing with the global rise of obesity and lifestyle disorders. According to World Health Organization (WHO) reports, it has been estimated that there were 422 million adults living with diabetes mellitus with 1.6 million deaths each year globally. The type 2 diabetes has been accounted for the majority (> 90-95%) of diabetes with approximately 1.5 million death annually (WHO, 2020). Various synthetic hypoglycemic agents have been used to control the elevated blood sugar level in patients with diabetes mellitus. Some common hypoglycemic agents approved by FDA include sulfonylureas, biguanides, thiazolidinediones and so on. Despite the availability of many effective oral hypoglycemic agents, diabetes is still life-threatening because of the limited clinical efficacy of existing drugs. Some common side effects that are associated with synthetic antidiabetic drugs include weight gain, weakness, fatigue, headache, palpitation, increased LDL chlosterol level etc. (Tanwar et al., 2020).

Plant-based traditional remedies have been used for the treatment of human diseases for thousands of years. About 80% of world population rely on traditional herbal medicines for primary health care. Traditional medicines derived from plants play a significant role in the management of a variety of human disorders including cancer, neurological disorders, diabetes and pain and inflammatory disorders, just to name a few. WHO has recommended the antidiabetic evaluation of traditional plant-based remedies or herbal preparations because they are effective with less or no toxicities as compared to synthetic antidiabetic drugs. Moreover, herbal medicines have the property of synergistic action due to the presence of a variety of active constituents in a single drug/ medicinal preparation (Jaiswal, 2016). Many indigenous Indian medicinal plants have been found to be useful in the treatment of diabetes mellitus. Ayurveda, Unani and Siddha, are the notable systems of medication documented in ancient practice basically utilizing plants/ plant-based preparations as medicines for curing human ailments/ diseases like diabetes. In view of their traditional and ethnopharmacological importance, herbal medicine may have potential role in the management of diabetes as well as its complications.

Cordia dichotoma Forst. (also known as Indian cherry) belonging to the family Boraginaceae is an average-sized tree of tropical and subtropical origin. It is widely found in Sri Lanka, India, and other tropical regions of the world. The use of this plant has been on ancient practice for the management of a variety of human disorders. It is also an important plant species found in the traditional Indian system of medicine including Ayurveda, Unani and Siddha. Seeds of C. dichotoma are used for the treatment of various inflammatory disorders. Fruits are used as expectorant, astringent, laxative and anthelmintic. Some common ethnomedinal uses of C. dichotoma includes antidiabetic, immunomodulator, diuretic, anthelmintic, wound healing, antiulcer, gastro-protective, anti-inflammatory, antileprotic, antidiabetic, and hepatoprotective and antioxidant activities. The bark of C. dichotoma has been reported to possess betulin, α-amyrins, octacosanol, β-sitosterol, lupeol-3-rhamnoside, β-sitosterol-3-glucoside, hentricontanol, taxifolin-3,5-dirhmnoside, α-amyrin, hentricontane and hesperitin-7-rhamnoside (Hussain et al., 2020).

Drugs and chemicals: Alloxan monohydrate was purchased from Sigma-Aldrich, Mumbai, India. Glibenclamide was procured as a gift sample from Sun Pharmaceutical Industries Ltd., India. All other chemicals, reagents and solvents used were of analytical grade.

Plant material, extraction and phytochemical screening: The barks of C. dichotoma Forst. were collected during the month of April-May, 2012 from the Duhai forest of Ghaziabad, Uttar Pradesh, India. The plant material was identified from CSIR-National Institute of Science Communication and Information Resources (CSIR-NISCAIR), New Delhi. A voucher specimen (NISCAIR/RHMD/ Consult/2012-13/2025/33) of the bark of C. dichotoma was submitted at the herbarium for future reference. The shade-dried barks of C. dichotoma were pulverized to coarse powder, defatted using petroleum ether, and extracted with methanol. The methanolic extract was subsequently evaporated to dryness and the concentrated extract so obtained was preserved in a refrigerator at 4 oC for further use. The percentage yield of the methanolic bark extract of C. dichotoma (MECD) was found to be 7.11% w/w on dry weight basis. The MECD was subjected to preliminary phytochemical screening to identify the presence of phytoconstituents as per the standard procedure previously described in literature (Ajiboye  et al., 2020; Junejo et al., 2018).

Experimental animals: Adult Wistar albino rats of either sex weighing around 300-330 g were obtained from the Institutional Animal House for the experimental study. Animals were acclimatized to the standard laboratory conditions (temperature: 25 ± 2 oC, relative humidity: 50 ± 5 %) with a 12 h light/12 h dark cycle for a week before the beginning of experiments, and were provided with free access to the standard pellet diet and drinking water ad libitum. The experimental protocol was approved by the IAEC vide approval no. IAEC/DU/58 dated. 24/09/2013.

Acute oral toxicity:The acute toxicity test of MECD was performed on Swiss albino mice (40-45 g) as per the OECD guidelines (Junejo et al., 2014b). After overnight fasting, the animals were given a fixed maximum dose 2000 mg/kg body weight via intraperitoneal route of administration. Animals were under observation for 48 hours for signs of mortality or morbidity or death. One group was maintained as normal control and was given only vehicle.

Histopathological investigation: At the end of 21 days of treatment, the animals were fasted for 12 hours, anaesthetized and sacrificed. Pancreas of rats from control, diabetic control, MECD treated, and standard drug treated (glibenclamide) groups were quickly removed and processed for histopathological studies. Pancreatic tissues removed from control and treated rats were washed in saline, the sections stained in haematoxylin-eosin were observed under a light microscope for histopathological investigations. Tissues were further fixed in Hollande‐Bouin fixative for 48 hours. Fixed tissues were processed for paraffin embedding (Junejo et al., 2020c).

Preliminary qualitative phytochemical analysis showed the presence of alkaloids, steroids, phenolic compounds, flavonoids, tannins, saponins and carbohydrate in the MECD.The animals showed no signs of adverse effects during the period of observation. No gross behavioural changes like drowsiness, restlessness, writhing, convulsions and symptoms of toxicity and mortality were observed in animals up to 48 hours of experimentation. The body weight and food consumption were normal as compared to control animals. The MECD was found to be safe up to the test dose of 2000 mg/kg body weight. 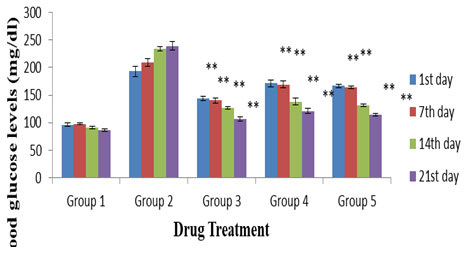 Table 1. Effect of MECD on body weight and lipid profile of diabetic rats

The MECD restored significantly (p < 0.01) the levels/ activities of GSH, SOD and CAT at both the doses (250 & 500 mg/kg body weight) as compared to the normal control. Additionally, the MECD significantly (p < 0.01) improved the levels of LPO marker component i.e., MDA in comparison to the normal control group. Results of the effects of MECD on antioxidant enzymes/ markers of diabetic rats are displayed in Table 2. Results also reveal that the antioxidant activity of MECD (500 mg/kg body weight) was comparable with that of the standard drug, glibenclamide (5 mg/kg body weight).

Histopathological investigations of pancreas of alloxan-induced diabetic rats (Figure 3) exhibited pathophysiological features with the reduction in the number of islets, damaged β-cell population and extensive necrotic changes followed by fibrosis and atrophy (Slide 2). In the normal control group, normal cellular population in the islets of Langerhans were observed (Slide 1). MECD (250 and 500 mg/kg) (Slide 3 and Slide 4, respectively) and glibenclamide (5 mg/kg) (Slide 5) treated rats restored the necrotic and fibrotic changes and also increased the number and the size of the islets. 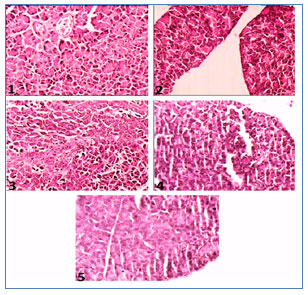 Cellular oxidative stress (OS) induced by the reactive oxygen species (ROS) produced from the action of free radicals in the biological matrix may be increased abnormally during diabetes, causing an imbalance between the cellular metabolism and the antioxidant system of the body. The oxidative stress produces inflammatory cascades that damage the cellular components such as beta cells of islets of Langerhans (Tanwar et al., 2020).

Further oxidative stress is undoubtedly claimed to have significant involvement in the pathogenesis of chronic diabetic mellitus along with various disease complications. The oxidative stress can be reduced to a considerable extent by the action of various antioxidant enzymes such as superoxide dismutase (SOD), catalase (CAT), glutathione reductase (GSH) and glutathione peroxidase (GPx) (Junejo et al., 2017, Debasis et al., 2010). Besides hypoglycemic activity, the antioxidant activity of herbal drugs can help reduce the long term complications of diabetes. Restoring the levels of antioxidant enzymes, herbal medications could act as free-radical scavengers and eventually prevent generation of ROS and OS induced cellular damages. Many studies have investigated the antioxidant potential of plant polyphenols and flavonoids. Phenolic phytoconstituents and flavonoids have been attributed to exhibit pharmacological effects against heart diseases, cancer, neurological disorders, diabetes, inflammatory disorders and so on owing to their radical scavenging actions (Sekhin-Loodu and, Rupasinghe, 2019; Shaheen et al., 2017).

In this study, the antioxidant potential of MECD may be the underlying reason behind its hypoglycaemic action. Phenolic compounds and flavonoids of MECD could prevent cellular oxidative stress and eventual tissue damages associated with diabetes. However, the probable mechanism of hypoglycemic action may be due to the potentiating effect of insulin either by stimulating the pancreatic insulin secretion from the β-cells of the islets of Langerhans or by its action on the body tissues.

Conflict of Interest: None