Infantile spasms or West syndrome, may be a serious and severe sort of neurological disease that generally affect infants who are younger than 2 years. West syndrome, or infantile spasms syndrome may be an oft ruinous infantile epileptic neurological disease with a range of aetiologies. We are reporting a 10 months old male child who is a known case of seizure disorder for 6 months and came with the chief complaints of spam of upper and lower limb, 2-3 episodes per day, which last for 3-4 min for 5 months.

The history included that the baby did not cry immediately after birth and was shifted to Neonatal intensive care unit (NICU) and was on ventilator support for 15 days and then discharged. Later at 4 months of age baby started developing convulsions, electroencephalogram (EEG) was done which suggested of epileptic encephalopathy along with hypsarrhythmia. Post EEG baby developed respiratory distress for which he was shifted to Paediatrics intensive care unit (PICU), kept on nil by mouth (NBM) and on oxygen support by nasal prongs, treatment started. Patient was hemodynamically stable and hence being discharged.

West syndrome or infantile spasms is characterised by abnormal patterns of brain waves referred to as hypsarrhythmia and with intellectual incapacity. The spasms that area unit occurring might vary from violent jack knife or “salaam” movements where the complete body bends in half, or are no over a delicate symptom of the muscles of shoulder or any eye deformity. These varieties of spasms usually begin at intervals the first birth months and will be helped with some medication. The occurrence of this is often usually between three to eight months of birth life. It’s characterised by the mixture of salaam spells that is abrupt dropping of the highest and arms flexion, body’s biological processes retarded and hypsarrhythmia on encephalogram. Common causes of  are hypoxic anaemia disorder, neurocutaneous syndromes, perinatal infections, injury, metabolic disorders, localized structural malformations and disorder (Desnous et al. 2021; Saravanapandian et al. 2021; Solberg and Riggio 2021).

The spasms occur largely within the cluster kind usually on or whereas waking. Its prognosis for ancient mental development is reasonably poor, adrenocorticotrophin and a few corticosteroids facilitate the period in fact varies from two weeks to twelve weeks, relying upon its response. The Vigabatrin is the drug of selection for the primary approach to the condition.  This can jointly occur within the older age patients; they are referred to as “epileptic spasms”. Currently, the ILAE (International League Against encephalopathy) has revised it and presently referred to as epileptic spasms preferentially accustomed comprehend varied age and groups of the onset and their area unit, someday several have varied causes of epileptic spasms and if a specific cause is understood, an identification of symptomatic epileptic spasms is made. If the cause cannot be detected, an identification of cryptogenic epileptic spasms may be created ( Lord 2019; Desnous et al. 2021).

Case Description: 10-month-old male child (Figure 1) who is a known case of seizure disorder for 6 months approached the Paediatrics out patient department (OPD) with the complaint of spasm of upper and lower limbs following 2-3 episodes per day which last for 3-4 min for 5 months. It was associated with drooling of saliva. The history was narrated by the mother of the child. Guidelines of CARE (Consensus Surgical Case Report (SCARE Agha RA et al. 2020 PubMed ID 33181358) for preparing Case Reports involving human subjects has been followed.

A 2.75 kg male child born to primigravida mother at full term gestational age via lower segment caesarean section (LSCS) with meconium-stained liquor and foetal bradycardia. Baby did not cry immediately after birth and was shifted to neonatal intensive care unit (NICU) following perinatal asphyxia and was then started on IV antibiotics and was on ventilator support for 15 days and then discharged. Later at 4 months of age baby started developing convulsions for which he was taken to nearby hospital where EEG was done which suggested frequent generalised epileptiform discharges along with slow background which was sign of epileptic encephalopathy.

He was then referred to AVBRH for further management. Baby did not achieve milestones as per age and has developmental delay. On examination, he was afebrile with heart rate (HR) of 110 beats per min, respiratory rate (RR) of 26 breaths per min. The cardiovascular system examination noted S1 S2 with no murmur. The respiratory system examination revealed no abnormality with equal air entry in bilateral lung fields. The patient was conscious, co-operative and well oriented to time, place and person as per the central nervous system examination. The abdominal examination suggested soft and non-tender viscera on palpation.

Patient was orally allowed and started on syrup Valparin. Dermatology opinion was taken following the hypo pigmented macules over the face to rule out tuberous sclerosis. As suggested calamine lotion was prescribed. EEG was done which was suggesting a sign of hypsarrhythmia. Post EEG baby developed respiratory distress for which he was shifted to Paediatric Intensive Care Unit (PICU). Patient was kept nil by mouth (NBM) and on O2 nasal prongs. He was started on injection Aumentin, nebulization with Levolin and Budecort was given. Tab prednisolone was started at 4mg/kg/day, ophthalmology call was done retinoscopy which was normal in range. Patient was then hemodynamically stable and hence being discharged. During the follow-up, the patient was advised for tapering off Tab. Prednisolone 20mg dissolve on 10ml, given 5ml morning, 4ml evening.

Figure 1: Patient in PICU with nasal prongs on and ECG leads for constant close monitoring of vitals. 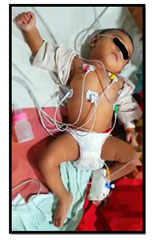 Review of the case: Epilepsy (in general) is characterized by recurrent episodic paroxysmal involuntary clinical events which are associated with abnormal electrical activity from the neurons. The patient may present with motor sensory psychomotor phenomena often associated with alteration in sensorium (Vaidyanathan et al. 2016).

An underlying cause for West syndrome is known in or so 70-75% of affected patients. Disorders that may result in the brain injury is associate underlying reason for West syndrome together with trauma, brain malformations like hemimegalencephaly or animal tissue abnormality, infections, body abnormalities like trisomy 21, neurocutaneous disorders like stem induration complicated (TSC), Sturge Weber syndrome, incontinent pigment, completely different metabolic/genetic diseases like adermin deficiency, non-ketotic hyperglycaemia, sirup pee disorder, PKU, mitochondrial encephalopathies and biotinidase deficiency, Otahara’s syndrome, associated an abnormality (mutation) within the ARX sequence or CDKL5 sequence situated on the X chromosome (Erdemir et al. 2021). West syndrome may be a rare syndrome that may have an effect on males and on females. The X-linked sort of West syndrome mainly affects males a lot of usually than compared to females (Kankanamage and Gome 2021).

Most kids can have the declension in some adeptness or lag deed skills which need synergism of the muscles and voluntary (willing) movements also referred as psychomotor retardation. Generally, 3rd of the kids affected with West syndrome might results in continual epileptic seizures as those kids ages. This syndrome usually leads to Lennox-Gastaut syndrome along with different forms of seizures, troublesome management along with related to intellectual incapacity (Kohli et al. 2021).

West syndrome has been clearly made public as a result of the association between infantile spasms with associate instrument pattern of hypsarrhythmia. The intellectual deficit appears within the majority cases at intervals that infantile spasms are not controlled with medication, this is (often/this can be) often an organic process aspect of the condition and not a manifestation that has got to primarily be gift thus on define the syndrome. The analysis of the interictal and attack encephalogram readings, at the side of the clinical characteristics of the spasms and additionally the drugs examination of patients, provides some orientation as regards the causations.

Despite the spectrum that the title of this work focuses on, the study does not cowl the treatment of early infants with West syndrome. stress is placed on the completely differential diagnoses of West syndrome with different epileptic syndromes that manifest at intervals the first a pair life, and a load of significantly with a series of abnormal non-epileptic motor phenomena that occur in early infants. of those last non-epileptic disorders square measure displayed in associate extremely table, but benign spasm of early infancy or Fejerman syndrome is given as a paradigmatic example for the diagnosis. The aboriginal aim is to prevent neurologically healthy early infants from receiving medication and sometimes adrenocorticotropin or some corticoids because of a wrong diagnosing (Kummerfeld et al. 2021; Ayad et al. 2021).

The findings of the present study has shown that by given the chance of weak biological process outcomes is, together with – emergence of different type of seizure disorders and psychological feature and biological process issues, the early recognition and treatment of effected area unit vital the best patient outcomes. The Dissemination of associated access to instructional and validating some resources for the families and those caregivers across the time period of the kid is a pressing want. medical specialty health care suppliers’ area unit well positioned to handle these desires.

Authors Contribution: All authors contributed equally to the manuscript.

Funding Source: The research has not received any external funding.

Informed Consent: Written & Oral informed consent was obtained from the participant included in the study.