The aim was to investigate the surface roughness of de-bonded ceramic surfaces with residual resin when treated with different resin removal treatment protocols. Sixty disc specimens of 5mm diameter and 3mm height of Lithium disilicate ceramic (IPS Emax Press) were fabricated. All specimens were treated with Hydrofluoric (HF) acid  (9.5%) for 30 secs. Except 10 specimens as controls, all received silane treatment and a resin cement build-up (3mm x 2mm). All build-ups were sheared with universal testing machine and residual resin was removed using 5 protocols. Group 1: No treatment; Group 2: Bur treatment; Group 3: Heat treatment  at 650° C (1min); Group 4: Heat treatment at 750° C (7 min); Group 5: Sandblasting (Al2O3) (2 min). The surface roughness (Ra) of all specimens was assessed using a non-contact laser surface profilometer. Data was assessed using ANOVA and multiple comparisons test. The highest roughness value was observed in the ceramic specimens exposed to sandblasting (Gp 5), which was 9.027 (1.362) μm. However the lowest Ra was observed for Gp 1 specimens [5.092 (0847) μm].   Overall, the difference among the study groups for surface roughness values was statistically significant (p<0.05). Presence of residual resin on de-bonded ceramic surfaces, compromises the surface roughness. Removal of residual resin with heat treatment at 650° C (1min) and sandblasting significantly improved and restored the surface roughness of de-bonded ceramics in comparison to Hydrofluoric acid etched ceramic surface.

Adhesive dentistry is the mainstay for esthetic restorations in oral rehabilitations. Resin and ceramic based materials are frequently employed for replacement of lost or damaged tooth structure and esthetic rejuvenations (Patil & Shetty, 2009). Esthetic ceramics are used in the form of veneers or crowns, however require surface conditioning of both the tooth and ceramic for predictable adhesive bonding (Farias et al., 2019).  Mechanisms used to secure ceramics to tooth structure include, mechanical retention with ceramic surface treatments for improved surface energy and micro-rough surface (Saker et al., 2019).

Resin cemented ceramic veneers are employed to improve tooth shade, shape, size and form. However debonding of intact veneers followed by re-bonding is a frequent phenomenon due to inadequacies in clinical procedure (Granell Ruíz et al., 2014). Re-bonding is a challenging procedure, as it requires complete removal of luting resin from the ceramic surface without damage (Blatz et al., 2003). It is considered critical to expose the ceramic after removing the luting resin from the surface pores to re-create the desired surface topography of ceramics as displayed after acid etching (Magne et al., 2006; Martins et al., 2012). It is reported that contamination of etched ceramic surface results in compromised ceramic resin bond (Magne et al., 2006; Martins et al., 2012). Contaminants of the etched ceramic surface reduce surface pore size and numbers, potentially altering the surface topography. Therefore a compromised surface microstructure of the ceramic will jeopardize micromechanical retentive properties of ceramic, reducing the potential for ceramic bonding to tooth.

All ceramic specimens were treated with Hydrofluoric (HF) acid  (Porcelain Etchant, 9.5%, Bisco-IL.USA) for 30 secs, followed by washing with water (20 sec) and ultrasonic cleaning in distilled water for 5 min. 10 specimens were kept as controls with no further treatment (positive control) (Gp C). The remaining fifty specimens were treated with silane (1 min) (Monobond Plus- Ivoclar Vivadent. NY, USA). It was followed by a build-up of dual cure resin cement  (Nexus 3rd Gen- Kerr CA, USA) (2mm diameter and 3mm height) on the ceramic surface using a putty mold and a glass slide. Excess cement was removed and resin cement was light cured (Bluephase, Ivoclar, Vivadent) for 40 sec from top and 40 sec after removal of mold.

All cement build-ups were sheared from the ceramic discs using a chisel placed parallel to the interface between the cement and ceramic. A controlled force was applied using a universal testing machine (Instron-5965) until fracture. The fifty specimens were further divided into 5 subgroups (n=10) based on the surface treatment for removal of residual resin on the ceramic surface.

Gp 4: Place ceramic in furnace and use glazing heat treatment procedure to pylorize (6+1 min at 750 ° C)

After ceramic surface treatments, surface profilometry was performed to assess the surface roughness (Ra) using a 3D non-contact optical surface profiler (Contour Gt-K1 optical profiler, Bruker Tucson, AZ, USA).  The surface profilometer produced scale independent outcomes and produced sub-nanometer vertical resolutions. The profiler used a strong Vision 64 interface for image production and scanning. The specimens did not need any preparation and prior to each measurement the profilometer was calibrated. An average of upto nine measurements were performed in parallel, oblique and perpendicular planes. The value of Ra in μm, presents an average of the surface traced by the profiler. The data obtained was assessed for normality and compared for roughness among the study groups using ANOVA and Tukey Multiple comparisons test.

All data obtained from profilometer assessments was normally distributed.  The surface roughness after HF acid etching- control group (Gp C) was 7.683 (0.609) μm.  With resin coating of the etched ceramic surface (Gp 1) the surface roughness reduced to 5.092 (0847) μm.  Four resin removal treatments were assessed in the present study. The surface of ceramic specimens placed in the furnaces i.e. group 3 and group 4, showed roughness (Ra) values of 8.274 (0.652) μm and 7.381 (0.721) μm respectively.  The observed roughness values among ceramic specimens treated with diamond bur (Gp 2) were 8.187 (1.539) μm. The highest roughness value was observed in the ceramic specimens exposed to sandblasting (Gp 5), which was 9.027 (1.362) μm (Table 1). 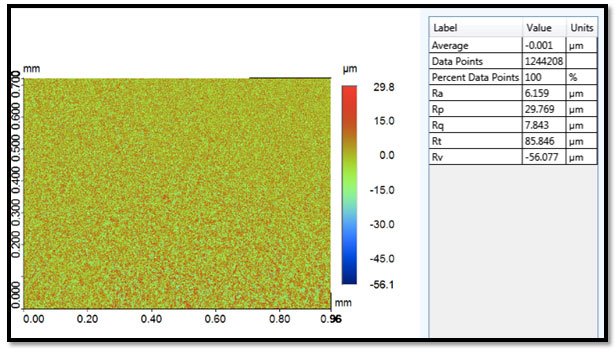 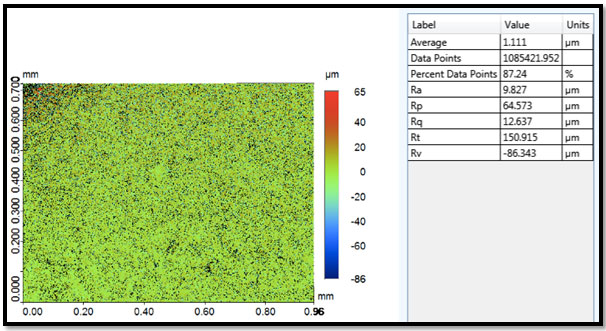 The present study was based on the hypothesis that use of different methods, including diamond bur, heat treatments in furnace (650 °C and glaze treatment) and sandblasting will significantly influence the surface roughness of de-bonded ceramic surface.  In the present study, specimens treated for resin removal using heat treatment, sandblasting and burs, all showed a significant change in ceramic surface roughness in comparison to untreated specimens. Therefore the proposed hypothesis was accepted. A myriad of explanations could support the outcomes in the present study, including chemical properties of resin, high speed impact of sandblasting and and physical properties of resin and ceramics.Surface roughness of Lithium disilicate (LD) ceramics was assessed as they are widely used in dentistry for oral rehabilitations. They are comprised of a silica glass matrix and lithium oxide crystals, which act as flux. LD ceramics show higher flexural and fracture resistance to conventional glass ceramics, due to the randomly arranged needle like crystals acting as crack stoppers (Awad et al., 2019).

When ceramic veneers are debonded, to improve surface finish, glaze procedure is often repeated; therefore heat treatment of resin-covered ceramics was investigated in the present study. In addition, diamond or carbide burs on a slow speed handpiece are the most common methods of resin removal for clinicians, chairside. Moreover, sandblasting with aluminum oxide particles is commonly employed in laboratories to remove material remnants and improve surface roughness of metals and ceramics (Barutcigil et al, 2019). “Ra” as a parameter of surface profile is widely used in material and ceramic research reports (Blunt et al, 2008). It is recommended that Ra is measured over “a number of consecutive sampling lengths”, and average values to be reported, as observed in the present study (Leach , 2010).

In the present study, HF acid etched surface was considered the standard (control), which showed higher Ra compared to resin treated specimens. The resin cement tends to occupy the surface pores produced by etching, covering the etched surface resulting in low roughness outcomes. Re-bonding of such surfaces does not allow penetration of bonding agent into the micro-porosities, hence resin covered surfaces were treated for resin removal. The use of diamond bur (group 2) in the present study resulted in a significantly higher Ra then group1 specimens (no resin removal).  It has been revealed in previous studies that diamond bur and disc treatments improve adhesive resistance of ceramics (Guler et al., 2005). Interestingly, the standard deviations of the bur treatment were wide (1.539), reflecting the operator dependency and error prone nature of this treatment modality.

We assessed the influence of heat treatments at 650° C and 750° C in an attempt to remove resin and expose the etched ceramic surface. It was shown that both heat treatments exhibited significant removal of resin and the Ra improved significantly from group 1. A possible explanation for this finding lies in the boiling point of resins, which is lower than the temperatures applied by the furnace in glaze cycles. In a study by Román-Rodríguez et al., (Román-Rodríguez et al., 2015) it was concluded that placement of ceramic veneer in the furnace at 650° C for 1 minute would burn out the resin on ceramic surface. It is now revealed that the ceramic surface roughness will be re-acquired as a result of heat treatment procedure. In addition the Ra for ceramics heated to 750° C (7 min) was lower (7.381) compared to the Ra for ceramics heated at 650° C (1 min) (8.274). This may be attributed to the  melting effect of high temperature heating for silica matrix within the lithium disilicate ceramics (Shenoy and Shenoy, 2010). This results in loss of depth width and size of micro-porosities produced by acid etch (Shenoy and Shenoy, 2010).

It was observed in the present study that resin covered ceramic surface when sandblasted, resulted in the highest surface roughness among all groups. The application of aluminum oxide particles at high speed creates impacts resulting in removal of resin on ceramic surface. However the increased surface roughness does not only represent the resin removal but merely shows the topographical effects of the high-speed particle impacts on the ceramic surface. In addition, the sandblasted specimens also showed a wide standard deviation for Ra (1.362), indicating a resin removal method with less reliability and possible untoward effects on ceramics (Zhang et al., 2004). Therefore although the surface roughness was significantly improved by sandblasting a standard protocol for its use in resin removal should be devised.

The author declare no conflict of interest

Magne, P. and Cascione, D., 2006. Influence of post-etching cleaning and connecting porcelain on the microtensile bond strength of composite resin to feldspathic porcelain. The Journal of prosthetic dentistry, 96(5), pp.354-361.