The status of health of any aquatic ecosystem is largely dependent on the diversity and density of zooplankton inhabiting the water body. Zooplankton are considered to be the most vital primary consumer in any aquatic ecosystem. At the same time, they also influence to a greater extent in determining the total productivity of an aquatic body. The present study is an attempt to estimate the diversity of zooplankton and to find out the richness, evenness, of the freshwater perennial aquatic body, Lalbundh of Bishnupur, Bankura.The study was carried out during December 2018 to November 2019.

The whole period of study was divided into four major seasons viz winter (December2018 to February2018), Summer (March2019to May 2019), Monsoon (June 2019 to August 2019) and post monsoon (September 2019 to November 2019). Collection of the zooplankton samples and their quantitative analysis was done following the standard procedures. During the whole period of study 18 different species of zooplankton have been identified from the study area. Out of them 7 species belong to the Rotifera group, 6 species belong to Cladocera group, 3 species of Copepoda group and 2 species of Ostracoda group.

Rotifera group comprise the dominant of all the groups constituting 39% of the total zooplankton species, followed by Cladocera (33%), Copepoda(18%) and Ostracoda (11%). The range of Shannon diversity index value of zooplankton varies from 2.76 to 2.88. The species richness value varies from 2.45 (winter) to 2.56 (monsoon). Evenness value varies from 0.95 in summer to0.98in monsoon. Zooplankton diversity indices values of Lalbundh give a clear indication of light condition of pollution level of the water body. The main reason behind the pollution of this perennial water body may be the floating dead and decomposed macrophytes in it. They should be removed as far as possible at regular intervals so that the pollution level can be reduced and the water body can be more efficiently used for pisciculture practices.

A large number of environmental factors of the habitat of the zooplankton play a very important role in their sustenance and survivability. If there is any sort of major change in the external environmental factor it will surely make an effect on the dominance, species diversity, tolerance, abundance as well as in the whole community structure of zooplankton inhabiting the aquatic body (Manickam et al. 2018; Sharma 2020).

These zooplankton are well known to act as biological indicator of any natural aquatic water body (Ahamad et al. 2011). Four major zooplankton groups viz. Rotifera, Copepoda, Ostracoda and Cladocera occupy the freshwater ponds and reservoirs (Rocha et al. 1999). Zooplankton are widely accepted as very important organism for fish feeding and nutrition . So, a successful aquaculture management depend to a large extent on the species density, species diversity and abundance of zooplankton in an aquatic body (Ghosh and Biswas 2015; Sharma 2020).

Although a lot of limnochemical study has been done on this water body, but zooplankton diversity study is lacking it which this present study will fill up the lacunae (Santra 2019). The main aim of the present study is to estimate the species diversity of zooplankton and to find out the richness, evenness, of the freshwater perennial aquatic body, Lalbundh of Bishnupur, Bankura. Besides, the study also put an effort to provide an in-depth knowledge about the condition of this perennial freshwater reservoir which can further be used by several government and non-government agencies for piscicultural practices for upliftment the economic condition of this region.

‘Lalbundh’ is one of the most important perennial water body of Bankura district. It covers an area of about 32 ha. It is located at Bishnupur sub division which falls under latitude 23°04′ and longitude 87°20′. This perennial water body, well known as as ‘bundh’ by the local people was dug by the rulers of this area to solve the problem of drinking water and irrigation in this area. Presently, this water body is used by several agencies for pisciculture and tourism purposes.

Composition and abundance of Zooplankton: During the whole period of study 18 different species of zooplankton were identified from the study area. Out of them 7 species belong to the Rotifera group, 6 species belong to Cladocera group, 3 species of Copepoda group and 2 species of Ostracoda group. Rotifera group comprised dominant of all the groups constituting 39% of the total zooplankton species, followed by Cladocera (33%), Copepoda (18%) and Ostracoda (11%). (Fig- 1). Zooplankton density (Table 2) was found to be highest in winter (1029 Ind/L) and lowest in monsoon (768Ind/L). Similar observations were observed by many other workers (Saba and Sadhu 2015; Sadasivan et al. 2019; Singh et al. 2021).

Diversity indices: Shannon – Weaver diversity index is an acceptable and useful parameter to determine the seasonal fluctuation of zooplankton and quality of water in an aquatic body (Sibel2006). Staub et al. (1970) has described Shannon diversity index (H) < 1 shows heavy pollution, H=1-2 means moderate condition of pollution, H = 2-3 light condition of pollution and 3-4.5 slight pollution. The range of Shannon diversity index value in the study area varied from 2.76 to 2.88 (Fig-2). This indicates light pollution of the aquatic body of the study area during the study period. Similar types of observation were made in Ganga River at Arrah (Pandit et al. 2020).

Shannon – Weaver Index (H) was high in winter (2.88). Ali et al. (2003), have also made similar type of observations. High value of Shannon index gives an indication of greater species diversity. The species richness value varies varied from 2.45 (winter) to 2.56 (monsoon). Species evenness value measures the relative abundance of each species in an area. In the aquatic body under study the lowest value of evenness was found in summer (0.95) and highest in monsoon (0.98) (Table2). Similar type of observation has been found on River Seeta (Ramesha and Sophia 2013; Pandit et al. 2020). 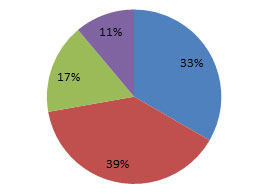 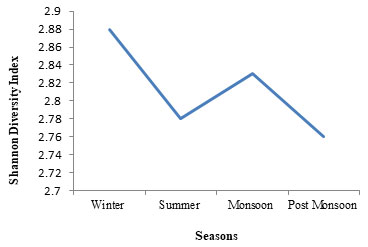 The findings of the present study reveals that zooplankton diversity indices values of Lalbundh give a clear indication of light condition of pollution level of the water body. The evenness value is quite high in the study area. This suggests that there is a minimum interspecific competition among the species in the aquatic body. Therefore, the compatibility among species is quite high. The decaying macrophytes should be removed from the water body at regular interval to decrease the pollution level and to increase the density of zooplankton so that this large aquatic body can be more efficiently used for pisciculture practices.

The study was not financially supported by any government or non-government agencies. The author wants to acknowledge Principal of Bankura Sammilani College for extending his support.

Conflict of Interests: The author declares no conflict of interest to disclose.

Santra, P.K. (2019). Studies of physicochemical status of the ponds of Bishnupur Temple City under Anthropogenic influence. Remarking An analisation, 3(10):174-178.