This pathogen causes nosocomial infections, urinary tract infections, liver abscesses, wound infections, meningitis. These strains obtain a multidrug resistant phenotype by way of horizontal transfer of ARG transported by either transposons or plasmids. This transfer is generally facilitated by Integrons. In this study antibiotic resistance profile and antibiotic resistance genes analysis as well as virulence gene of K. pneumoniae strains were investigated. The study was carried out using 853 clinical isolates collected during 3 years from C.U. Shah hospital of Surendranagar. Antibiotic resistance profile test was carried out by the VITEK 2 against 21 antibiotics.

In this study, we’ve analyzed the pattern of antibiotic resistance pattern as a phenotypic characteristic and antibiotic resistance genes as genotypic characteristic and co related the results. As multidrug resistance is a worrying matter, constant observation and regular clinical recognition of resistant bacteria are essential to avoid terrible public health incidents. So, our data should be inferred as a warning for need for prevention and control of the MDR K. pneumoniae in hospital settings.

In the treatise Antibiotic resistance, a universal fact is broadly defined which linked with therapeutic failure and increase growth rate in sickness as well as death (Julian et al. 2017). Spreading of resistance in Enterobacteriaceae family is because of swapping the antimicrobial resistance gene amongst the species in hospital environment by plasmid, transposons and integrons like MEGs (Valentina et al. 2019; Kelly et al. 2020).

This can be observed in gram +Ve and -Ve bacteria which is classified by WHO as critical priority pathogens. K. pneumoniae is one of the gram -ve pathogenic bacteria which is in red zone of WHO. As per literature total 8 integrons class are available in which first 3 are specifically connected with antibiotic resistance (Sara et al. 2018; Fernanda et al. 2018; Mehdi et al. 2021).

Klebsiella pneumoniae is gradually intrusive virulent pathogen with antibiotic resistance genes like extended-spectrum β-lactamases (ESBLs), AmpCs and carbapenemases in Enterobacteriaceae family. So, to elaborate the resistome and its mechanism as well as MGEs linked with them and phylogenomic of K. pneumoniae, we carried out this study (Hongmao et al. 2021).

The DNA extraction was performed using the HiPurATM Bacterial Genomic DNA Purification Kit MB505. Samples were processed according to kit the instructions for optimum yield. From each isolated DNA sample, 2 µL was used to determine the 260:280 ratios for DNA quality determination and to estimate the DNA concentration using the Nano Drop 1000 spectrophotometer and Qubit Fluorometer. At least 500 ng of DNA for each sample was sent for further sequencing analysis.

The raw sequences were assembled and annotated with TORMES. It was an open-source, user-friendly pipeline for whole bacterial genome sequencing (WGS) analysis directly from raw Illumina paired-end sequencing data. TORMES functioned with all bacterial WGS dataset, despite the number, source, or species. TORMES pipeline is freely available in https://github.com/nmquijada/tormes, with a manual how to use it. TORMES pipeline and all the required software and dependencies can be automatically installed by using Conda (Quijada et al. 2019).

The study about this suggest that genes linked with antimicrobial resistance (AMR) are each strong and from different sub populations (Holt et al. 2015; Wyres et al. 2019). So, there is a possibility of a dangerous strains which are highly pathogenic and resistant to all or almost available antibiotics. (Gu et al. 2017; Lam et al. 2019; Mehdi et al. 2021).

Figure 1: From the 3 years data of patients demonstrate the frequency of different
type specimen sources and ratio of infected male and Female 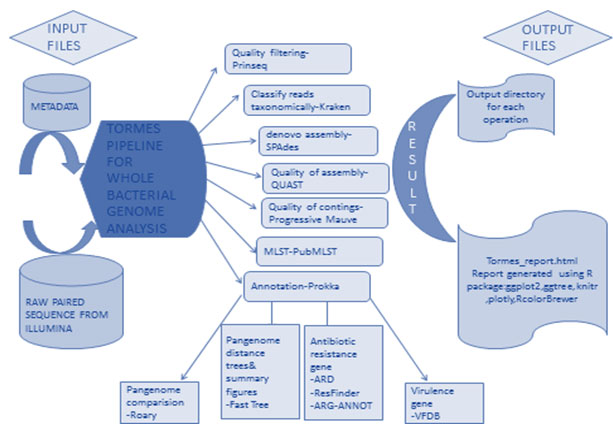 It is to be noted that these are the genes which are present in all the isolates either resistant or susceptible for different antibiotic. As per VFDB fimE and fimA are type one fimbriae protein and expressed in 90% of clinical K. pneumoniae isolates as well as entA, entB and entE are responsible for ion acquision. Whereas fepA, fepB, fepC, and fepD are siderophore. (Morales et al. 2021). 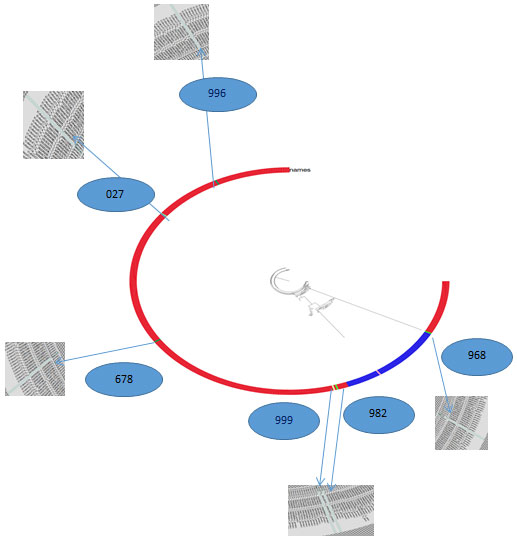 Along with analysis of whole genome sequence, for evolutionary study phylogenomic analysis was carried out for selected K. pneumoniae isolates by Fast Tree. Which infers approximately-maximum-likelihood phylogenetic trees from alignments of nucleotide or protein sequences (http://www.microbesonline.org/fasttree/). In this study it is done with 365 Klebsiella species. (NCBI dataset).

K. pneumoniae isolates exhibited important phylogenetic diversity (Figure-3), with the whole-genome phylogenetics presenting higher resolution than the MLST typing scheme. For example, K5 (982) was phylogenetically closer to K7 (999) than other K3(968) strains, which were themselves found on different branches. Remarkably, K6 (027), K1 (996) had phylogenetically distant from other strain but they both somewhat closer within the collection.

(Github https://github.com/tseemann/mlst). Molecular mechanisms of resistance and virulence spreading in clinical K. pneumoniae strains circulating in hospitals were illustrated and noted to be ornately capable with various factors of resistance, virulence and mobile-genetic elements. Especially, the isolates were MDR to several clinically important antibiotics except for reserved ones such as the colistin. Presence of the MDR strain and the strains which are sensitive to only one or two antibiotics in specimens from the various patients in hospital make this a very perturbing result (Nontombi et al. 2020).

The presence of the CTX-M, TEM, OXA, and SHV ESBL genes in analogous genetic frameworks have been illustrated previously in same and different species or different bacteria from same family in India and global isolates. The presence of these ARGs in the similar genetic environment and on the similar plasmid replicons throughout similar and dissimilar species everywhere in the world effectively indicates the clonal and plasmid-mediated distribution of these ARGs (Reza et al. 2019; Nontombi et al. 2020). Precisely, ISEcp1 plasmid have been revealed to mobilize and facilitate the global spread of CTX-M-15. Including the various CTX-M variants, CTX-M-15 was the major and it was first stated from the Indian subcontinent (Roghieh et al. 2021).

We reported a similar prevalence of OXA and SHV β–lactamase genes in these isolates, make sure that this apparently chromosomally encoded gene, is almost present in K. pneumoniae species. The strong catalog of ARGs in these isolates indicate the existence of one or more plasmids. OXA-1 plasmid-mediated β-lactamases among K. pneumoniae strains indicated the resistance against beta lactam antibiotics especially ampicillin and piperacillin. 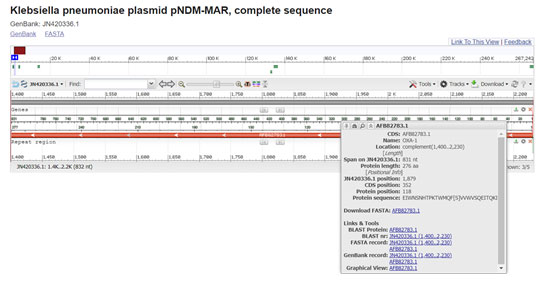 Gene OXA-9 was originally found within the structure of Tn1331, a multi resistance transposon first isolated from a clinical Klebsiella pneumoniae strain. Comparison of gene sequences in the GenBank database revealed homology of the positions 1 to 826 in Klebsiella pneumoniae with OXA-9(100 % identity, position 130 to 954; accession no. M55547:1-826). Both OXA-1 and OXA-9 are the part of transposon which is part of plasmid but easily move from plasmid to plasmid and plasmid to chromosome and vice versa which were carrying antibiotic resistance genes (Bojorquez et al. 1998; Navdezda et al. 2019; Katerina et al. 2021). 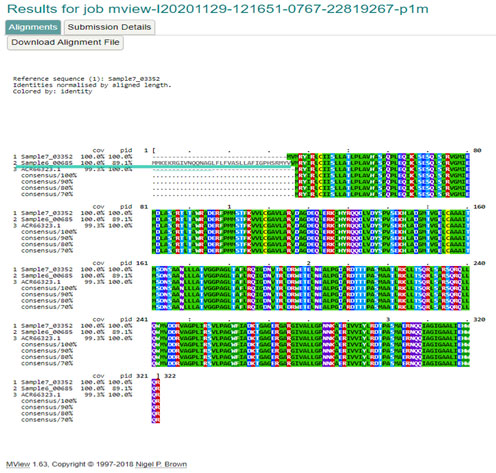 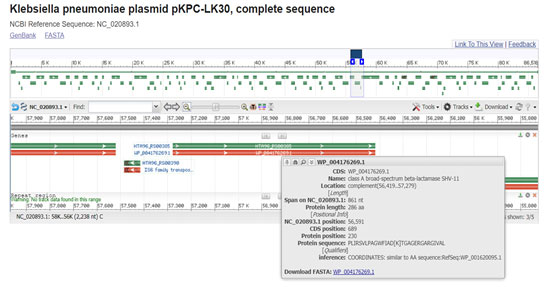 TEM-1 is the commonly encountered and one of the most well-known beta-lactamase in gram-negative bacteria confirmed resistance against penicillins and generally first-generation cephalosporin. All TEM variants differ in amino acid sequence (in general by one to five substitutions) and many of them differ in resistance phenotype (the degree of resistance they confer to different antibiotics). In this study TEM-1 was detected in isolate 678 and TEM-150 was in isolate 027 (Salverda et al. 2010; Nadezhda et al. 2021).

NDM-5 new delhi metallo beta lactamase was detected in isolate 678 only. It resembles resistance against penicillin, cephalosporin and carbapenem class antibiotics. In the study of Hazim et al. in 2016 and Lauren et al. in 2019 NDM-5 was responsible for the resistance against beta lactam antibiotics. If we compare gene sequence in the GenBank database, it revealed homology of the positions 115-928 in E. coli with NDM-5 (100% identity, position 457 to 1569; accession number JN104597:115-928) (Wang et al. 2020).

PDC-2 is a class-C ESBL generally present in Pseudomonas aeruginosa express resistance against cephalosporin and carbapenem class antibiotics. It is most frequently AmpC-type variant. We detected it in isolate 968. Comparison of gene sequences in the GenBank database revealed homology of the positions 1 to 1195 in Pseudomonas aeruginosa with CTX-M-15 (99.58 % identity, position 734 to 1927; accession number FJ666064:1-1195) (Zain et al. 2020).

The findings of the present study determine that with the increasing worldwide occurrence of antibiotic resistant pathogens, knowing how bacteria adapt and evolve to drug stress is enormously important. This study showed the distribution of the possible resistome for Klebsiella pneumoniae isolates through WGS analysis. The presence of specific AMR genes represents a development towards higher MICs values for β-lactams anti microbials.

The results of this work showed the association between phenotypic resistance and the number of exclusive AMR gene sequences. There were difference and similarity in the phenotypic and genotypic resistance between bacterial species. Some specific AMR genes found in these genomes could be potentially invented from horizontal transfer of mobile elements. In general, more studies are needed to search the probable sources of these AMR genes.

Nachimuthu R (2017). The distribution of carbapenem- and colistin-resistance in Gram-negative bacteria from the Tamil Nadu region in India. Journal of Medical Microbiology. 66:7.