The Radix Entomolaris: Management of a Failed
Root Treatment : A Case Report

Among all the causes of root canal failure, incapability to identify and negotiate additional canals is one  which is of prime value, from treatment point of view. Mandibular molars display anatomical variations in the form of an additional root located lingually (radix entomolaris) or buccally (radix paramolaris). It is critical to understand the root morphology and canal patterns of teeth indicated for canal treatments for successful treatment outcomes. This case report presents a re-root treatment of a failed root canal treatment of a first molar tooth with Radix Entomolaris.

The healing of periapical pathology is influenced by comprehensive cleaning via chemo-mechanical means and shaping of the infected radicular canals (Parashar et al. 2015). Among all the causes of root canal failure, incapability to identify and negotiate additional canals is one of them. Thus, the understanding of the dentist towards the unusual root canal anatomy is an important aspect during an endodontic treatment. The mandibular first molar tooth because of its age, position and pattern of eruption is the most commonly involved tooth with endodontic requirement (Campos 1989; Calberson et al. 2007). It displays the most significant morphological variation related to number of canals and the roots among the entire dentition (Sarangi and Uppin 2014; Lima et al. 2020).

Carabelli in (1844), accidently found mandibular molar a supernumerary third root which is found to be located on disto-lingually side of the tooth and named it as “radix entomolaris” (RE) (Pai et al. 2014). RE can be found in any of the mandibular molars with least occurring in second molars (Sinha et al. 2016). Literature revealed that RE most commonly displayed vertucci type 1 canal configuration (Meidyawati et al. 2016). It occurs most frequently in Mongoloid race with a frequency of 5-30%. Whereas, in white Caucasian, African, Eurasian and Indian populations frequency was less than 5% (Kuzekanani et al. 2017; Duman et al. 2020).

Radiographic analysis is a prerequisite to identify and instrument the extra canals, which if overlooked will later be responsible for future failure of root canal treatment (RCT).  Previous studies rely on an additional angulated periapical radiograph by tube shifting mesially and distally at 20–30 degrees angle (Parallax technique). This technique helps to identify extra root and canal manifestation and its position using Buccal Object Rule. Nowadays, cone beam volumetric tomography (CBVT) has gained more importance due to its highly informative nature when compared to tube shifted periapical radiographs.

Case Report Presentation: A 26-year-old female patient visited the dental OPD with a complain of spontaneous pain on biting in lower right area from 1 month. Medical history revealed that patient is not allergic to any drug. BP and pulse was in the normal range i.e. 124/85, 70 respectively. On the basis of medical history patient was classified as ASA I which corresponds to normal healthy patient. Patient also revealed that she had undergone RCT, 5 years ago from a general dental practitioner. An extra-oral examination showed a symmetric face with no head and neck lymph node involvement. TMJ examination revealed no clicking sound with limited mouth opening. Upon intraoral clinical examination it was found that that tooth was previously restored with PFM crown and it is sensitive to percussion and palpation.

Figure 1: Pre-operative radiographs of the tooth

Re-endodontic treatment was planned and patient was informed regarding the treatment for informed consent. Before starting the dental treatment, local anesthetic was injected and access cavity was prepared (Fig 2A). Removal of the metal screw post was achieved using ultrasonic tip (Fig 2B & C).

Figure 2: Clinical Removal of post form the tooth prior to root canal treatment. 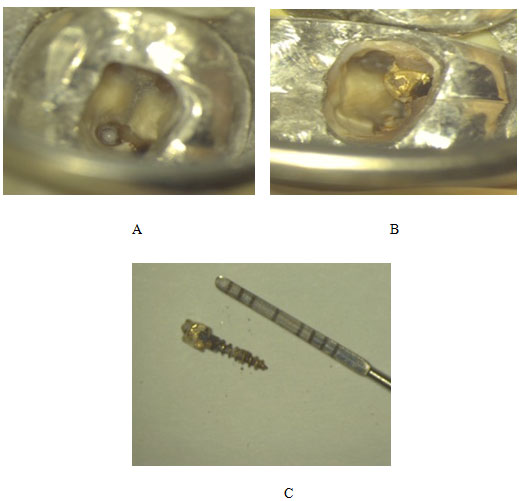 All the canal orifices were negotiated with the help of DG-16 explorer. Four canals were found under operating microscope magniﬁcation (M320 dental microscope, Leica Microsystems, Germany). The apex locator (Root ZX II, J Morita, Germany) was used to determine the working length. After the conventional hand filing, universal protaper was used to prepare all the four canals. The canals were constantly irrigated using 6% sodium hypochlorite (NaOCL) After instrumentation was completed, calcium hydroxide was placed for 7 days and patient was recalled.

On the patient visit after 7 days intra canal medicament was removed by irrigating the canal with NaOCL and hand instrument followed by final rinse with 17% Ethylenediaminetetraacetic acid (EDTA). The canals were dried using paper points and obturated using warm vertical compaction with Gutta-percha and AH Plus sealer (Maillefer Dentsply, Ballaigues, Switzerland) (Fig 3 & 4).

Figure 4: Final Radiographs of the root treated tooth after completion of re-root treatment

The patient was reviewed regularly at 12 months interval and a radiograph was taken after two-year follow up (Fig 5).

Figure 5: Radiogrpahs of the re root treated tooth at 2 years follow up with no radiological signs of pathology.

Out of which, 64.4% displayed three canals with two within the mesial root and one in the distal root. However, 28% of cases showed two canals in the distal root (Iwanaga et al. 2020; Alkahtany et al. 2021). RE which is comparatively a rare finding during root dental procedure. The actual causes of its occurrence are still not discovered. However, some researchers assumed that this may be due to some disruption of pathway during odontogenesis or it may be due to genetic predisposition (Carlsen and Alexandersen 1990; Iwanaga et al. 2021).

If RE is identified before initiation of endodontic procedure it is preferred to prepare a modified trapezoidal access cavity for canal location (López-Rosales et al. 2015) . De Moor et al. in their study revealed that in most of the RE cases the canals were curved (De moor et al. 2004). Therefore, exploration of canals with K patency file (size 10 or less) followed by working length and curvature determination using periapical radiograph to avoid procedural accident is preferred (Chaganti, 2017; Duman et al. 2020).

Most of the time it was observed that, radix ento-molaris canal orifice are covered and occluded with secondary dentinal tissue. The preparation of access cavity in such cases may result in perforation (Attam et al. 2012; Różyło et al. 2014). Hence, it should be kept in mind that secondary dentin is mostly white and opaque in color whereas pulp chamber is comparatively darker and gray in appearance (Gupta et al. 2013). The visual access and greater control of instruments during access preparation will help to prevent any mishap (Mahendar et al. 2013; Duman et al. 2020).

The findings of the present case report suggests that correct interpretation of angled radiographs and careful examination of the access cavity chamber floor is pivotal in managing Radix Entomolaris. The use of recent concepts in access cavity preparation along with the accurate understanding of variable anatomy helps clinician to locate and treat the root canals in case of Radix Entomolaris

Conflict of Interests: Author declares no conflict of interest to disclose.