The agrarian policy pursued in Russia is primarily aimed at ensuring food security, the main components of which are the economic and physical availability of food to the population. However, the indicators approved in the regulatory legal acts on food security monitoring do not contribute to its objective assessment. They can be used to assess the overall state of food security. A more in-depth analysis is needed for a more objective assessment of the economic availability of food to the population of the Russian Federation, which requires, among other things, changes in the methods of calculating food independence, taking into account the share of household disposable resources used to purchase food.

It is also necessary to take into account the energy value of food, the quality of food consumed, etc. To do this, it is necessary to significantly expand the information base on the food consumed, including taking into account its quality and energy value. The paper attempts, based on the available analytical data, to assess the economic availability of food for households depending on their income, as well as in the context of socio-demographic groups, to identify the main factors constraining bringing the level of food consumption to rational norms.

The conducted agri-food policy contributed to an increase in the gross harvest of the main crops. For 2010-2020, gross grain collections increased from 94.2 to 133.5 million tons, sunflower seeds from 5.3 to 13.3 million tons, fruits and berries from 2.1 to 3.7 million tons, vegetables of protected and open ground from 11 to 13.9 million tons. The gross harvest of potatoes and sugar beet are unstable, but at the same time tend to increase. The production of livestock products, which is especially important for ensuring the Doctrine of Food Security, is also increasing at a less dynamic pace. From 2010 to 2020, milk production increased from 31.5 to 32.2 million tons, and the production of livestock and poultry for slaughter (in slaughter weight) from 7.2 to 11 million tons, marketable eggs from 40.8 to 48.4 billion units, which is still not enough to ensure food security indicators (Rosstat 2021).

In 2020, farms of all categories produced gross agricultural output of 6.1 trillion rubles, including 3.3 trillion rubles in crop production, 2.8 trillion rubles in animal husbandry (Table 1). The volume of gross output produced in farms of all categories in 2020 increased by 5.3%, including in crop production by 7.2%, in animal husbandry by 3.2%. Even though the volume index of GDP amounted to 97% and has a downward trend, this indicator in agriculture, although unstable, exceeds the average for the economy. The volume index of agricultural production was 1.5% in 2020 (Figure 1). As before, a significant share of agricultural products is produced by large-scale agricultural organizations, which have undoubted advantages in the formation of their production capacity, produced on an industrial scale.

Table 1. Agricultural products in farms of all categories of the Russian Federation, billion rubles 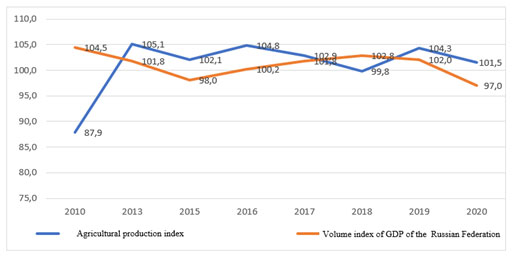 Table 2. Gross agricultural output by category of farms (in actual prices; as a percentage of the total)

Table 3. Change in the share of production of the main types of agricultural
products by categories of farms for 2000-2020, %

Figure 2: Volume index of investments in all types of economic activity, including
agriculture for2009-2020, compared to the previous year, % 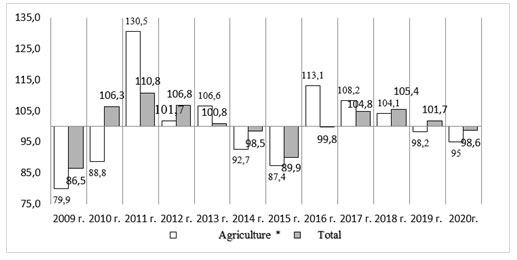 Despite this, positive trends in the development of agricultural production should be noted. The number of high-performance jobs continues to increase. In (2020), there were more than 635 thousand of them (Figure 3), which, according to preliminary estimates, is about 14% of the total number of jobs in agriculture. In this direction, it was necessary to do serious work related to both an increase in the intensity of production and an increase in the incomes of agricultural workers. Together, this would increase the purchasing power of the rural population, and would also contribute to an increase in the level of food independence and economic accessibility of food (Kolesnikov 2019).

Figure 3: The number of high-performance jobs in agriculture, thousand units

It should be understood that the successfully developed market situation in the world food market should not become a reason for abstracting from issues related to increasing the volume of food exports, taking into account the implementation of the indicators of the Food Security Doctrine. Here it was necessary to make efforts to increase the production of agricultural products, as well as to increase the share of the sale of food with high added value. It was also necessary to increase the volume of export products with high conversion rates.

Special attention should be paid to this aspect. This was also due to the adoption by several developed countries of programs to significantly reduce the use of hydrocarbons, the transition to a green economy, which would negatively affect the raw exports of hydrocarbons and reduce the total volume of export revenue. Based on the above, it was necessary to increase the volume of production of agricultural products of high processing, improve its quality, enter new markets for food (Altukhov, Drokin and Zhuravlev 2015; Kolesnikov, Akupiyan and Andreeva 2017).

Table 4. Profit from the results of the activities of agricultural organizations

Table 5. Dynamics of production and consumption of basic foodstuffs in the Russian Federation

Table 6. Deficit of consumption of basic foodstuffs by decile groups in 2019,
on average per consumer per year, kg

In general, actual consumption exceeds rational norms in the Russian Federation for most types of food. The exception is meat and meat products, milk and dairy products, vegetables, fruits, and berries. Russians consume more than the norm for other types of food (Table 8).

Table 7. Shortage of funds for the purchase of basic foodstuffs by decile groups per year, rub

It was necessary to pay attention to the increase in the production of livestock products, as well as vegetables, fruits, and berries. Based on the above analytical material, the Russian Federation produces poultry meat and pig meat in sufficient volume, and it approaches rational consumption standards in terms of the production of cattle meat (Kolesnikov et al., 2017).

Milk production was of concern. When consuming 325 kg per year according to rational consumption standards, it is necessary to produce at least 47.7 million tons of milk instead of 32.2 (Table 9). The shortage of food consumption is distributed unevenly across the federal districts of the Russian Federation, which is largely due to different natural and climatic conditions for the production of crops. Based on production and consumption, the deficit of livestock products in federal districts is calculated (Ushachev et al 2019).

Source: Compiled by the author according to Rosstat (2021)

Table 10. Shortage of livestock products and the necessary acreage for the production of grain crops

Table 13. Production of basic foodstuffs for domestic consumption by the population in the Russian Federation in (2036)

In the future, vegetable growing of protected and open ground will require close attention. The population of the Russian Federation is experiencing a significant shortage in vegetable production, so the production of vegetables on the open and protected ground needs to be increased from 13.9 to 16.8-18.7 million tons. It will also require a slight increase in the production of grapes and stonecrops, reserves for the placement of which are available in the North Caucasus Federal District and the Southern Federal District. It will also require an increase in the production of seed crops from 8.5 to 8.7 million tons (Ushachev et al 2019).

In addition, bringing the volume of meat and milk production will contribute to an increase in domestic grain consumption from 78.5 million tons to 79.3-87.9 million tons. Such an increase can be compensated either by the growth of grain production without a decrease in export volumes or without a significant increase in production volumes due to a decrease in export volumes. Increasing the volume of production of basic types of food is necessary to form 100% of the economic availability of food to the population of the Russian Federation (Ushachev et al. 2019).

Altukhov, AI, Drokin, VV and Zhuravlev, AS (2015). Food security and import substitution are the main strategic objectives of modern agricultural policy Economy of Regions No 3 Pages 256-266.

Kolesnikov, AV (2019). Assessment of the purchasing power of the population AIC: economics, management No 9 Pages 73-84.