Chitosan, a cationic biopolymer is a major derivative of chitin. It is biocompatible, non-toxic and environ-friendly material and has broad spectrum antimicrobial activity. However, it is less effective in neutral or basic conditions due to its solubility only in acidic medium. Therefore, chemical modification with suitable groups is necessary to enhance the potency of chitosan. The present study was mainly conducted to explore the effect of structural modifications on antimicrobial potential of chitosan.  N-Methyl, N-Ethyl and N-Propyl pyrrole were reacted with N-chloroacyl-6-O-triphenylmethylchitosan prepared by stepwise modification of chitosan to form N-Methyl, N-Ethyl and N-Propyl pyrrole derivatives of chitosan. Structural characterization of these pyrrole derivatives was done by IR, NMR, XRD, DSC and Elemental Analysis.

Chitosan, a linear heteropolymer is now considered as a functional biopolymer. It is widely exploited for its applications on account of its biodegradability, biocompatibility, versatility and also is found plentiful in nature (Mati-Bauche et al. 2014). Chitosan is the major derivative of the chitin. It is readily soluble in diluted acetic acid (Kumari et al. 2017). Chitosan gained curiosity of researchers not only because of  its various properties but also due to its unique biological applications such as antimicrobial, hypocholesterolemic, antitumor, anti-inflammatory, antioxidant, angiotensin-I-converting enzyme (ACE) inhibition, excluding toxins from the intestines, reducing heavy-metal poisoning in humans,

Pyrrole containing heterocyclic derivatives has been reported for exhibiting wide biological applications, like antibacterial, antioxidant, cytotoxic, insecticidal, anti-inflammatory, anticoagulant, antiallergic, antiarrhythmic, hypotensive and anticonvulsant, due to which they are preferred in a variety of medicinal agents (Parmar et al. 2012; Masci et al. 2019; Kundu and Pramanik 2020).

Due to limited solubility chitosan has not been an effective antimicrobial agent. Thus, in order to enhance the solubility and to broaden antimicrobial activity of chitosan, present study was taken up to synthesize N-alkylated pyrrole derivatives of chitosan and to compare their antibacterial and antifungal property with chitosan.

Chitosan (CS) was purchased from Nitte gelatin India Limited (Kochi, Kerala, degree of deacetylation 76%). All the other chemicals were purchased from Loba Chemie, Sisco research laboratories, Spectrum Reagents and Chemicals, Alfa Aesar, Nice Chemicals. All the chemicals were used without any further purification. Synthesis of N-Chloroacetyl-6-O-triphenylmethyl chitosan intermediate from chitosan (Fig. 1) was done as per the procedure reported earlier. N-Chloroacyl-6-O-triphenylmethyl chitosan intermediate was synthesized stepwise from Chitosan. It (10g) was dispersed overnight in DMF (200 mL), treated with Phthalic anhydride (27.6 g, 186 mmol) at 120°C for 8 h to obtain N-Phthaloylchitosan. 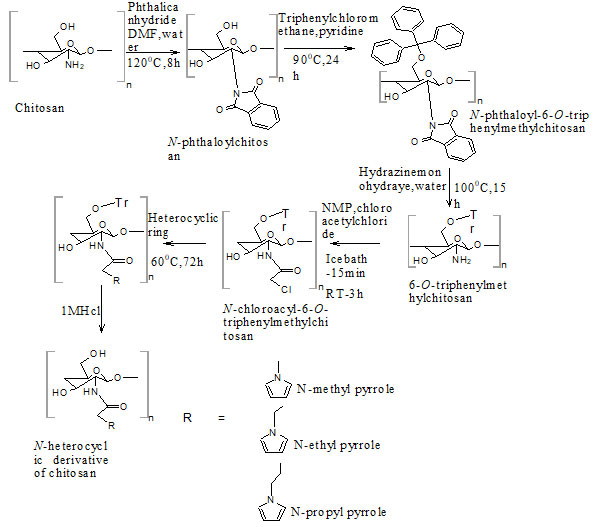 For the study of physicochemical properties, the intrinsic viscosity of CS and NPCS was measured by Ostwald viscometer. Mixture of 0.1 M acetic acid and of 0.2 M sodium chloride solution (1:2) was used as solvent. The solutions were filtered through a filter paper to remove insoluble impurities and then were passed through the viscometer. Intrinsic viscosity ([η]) was calculated. The molecular weight of chitosan and NPCS was determined by Staudinger equation log [η] = log K + a log Mv,

For the determination of swelling index, swelling capacity of the CS and NPCS was studied in different media. Previously weighed derivative samples (0.5 g for each test) were individually immersed in 30 mL 0.1 M acetic acid, Phosphate buffer saline of pH 7.4, distilled water and 0.1 M NaOH. The samples were then recovered from the media when they reached equilibrium swelling (24h), wiped with filter paper and weighed. The swelling ratio of each sample was determined according to the following equation:Swelling ratio (%) = (Wt – Wo) / Wt) x 100

2011; Gharieb et al. 2015). MIC was recorded in each case as the minimum concentration of compound which inhibited the growth of tested microorganism after incubation at 370C for 24 h. From the MIC observed, the intermediate concentrations between MIC values were prepared by suitable dilution of stock solution to determine accurate MIC values. Each concentration was tested in triplicate (Li and Zhuang 2020; Lo et al. 2020).

Yield and Physicochemical properties: The yield of N-methylpyrrole derivative of chitosan was found to be highest as compared with N-ethylpyrrole and N-propylpyrrole derivatives.  It was found that after the chemical modification there was increase in intrinsic viscosity [η] of the resultant derivatives. There has been significant increase in the swelling index of NPCS compared to that of CS. The results are mentioned in table 1. The improved swelling index due to increase in rate of hydration indicated for better absorption of the drug.

Elemental analysis: After elemental analysis of CS and N-methyl, N-ethyl and N-propylpyrrole derivatives (S1, S2, S3) the values of percent of carbon, hydrogen and nitrogen were found experimentally close to the values obtained theoretically (Jauris et al. 2017). The C/N ratios were also calculated and from that the degree of substitution (DS) was determined. The values of DS suggested full N substitution in all the NPCS (Barbosa et al. 2019). The results are shown in table 2.

Table 2. Elemental composition and degree of substitution of chitosan and N-alkylated pyrrole derivatives of chitosan

X-Ray Diffraction (XRD) analysis: XRD diffractogram of CS showed the characteristic peaks at 10.30 and 20.1°, which suggested the formation of inter and intra-molecular hydrogen bonds in the presence of free amino groups. Absence of these two peaks in the spectra of all three NPCS confirmed that CS was substituted by the corresponding substituents added. In the samples S1 peak at 4.50 was attributed to the alkyl chain and the other two peaks at 26.60 and 15.50 were formed for pyrrole moiety. S2 showed two peaks at 4.30 and 4.50 for alkyl chain and two peaks at 25.70 and 15.80 for the pyrrole moiety and in S3 the peaks at 4.30 and 5.50 attributed to the alkyl chain and the peaks at 25.60 and 14.60 for the pyrrole nucleus chitosan (Mobarak et al. 2010; Wang et al. 2014; Pati et al. 2020). The crystalline index of CS as well as PCS was determined by following formula: 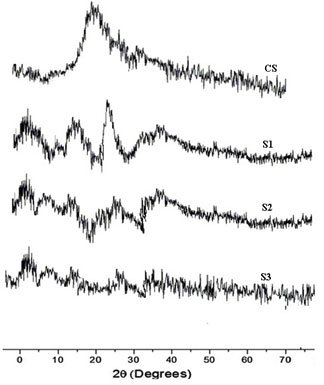 DSC analysis: Thermogram of CS showed typical polysaccharide behaviour with two distinct degradation stages. The first wide peak started at 30ºC and continued up to 150ºC, which corresponding to a dehydration process. The second stage started at 245ºC and an elevation in the baseline, corresponding to combustion of the sample, was observed. No exothermic melting peak was displayed due to the amorphous state of the CS.

From the DSC values it could be concluded that the peak at 95.590C corresponded to dehydration of the sample. The second peak at 163.520C corresponded to the melting of sample. The third stage showed a positive peak which was exothermic in nature which was due to the curing of the sample. The peak at 163.520C clearly coincided with the melting point found out from the capillary melting point apparatus. Thermogram of S2 showed two distinct endothermic peaks at 118.980C and 218.980C which showed the degradation as well as the melting of sample.

The melting point of S2 obtained from DSC agreed with the value obtained by capillary melting point apparatus. S3 showed two endothermic peaks at 76.550C and 112.750C which corresponded to the loss of water and the melting of the sample. The sample showed similar melting points for both DSC as well as capillary tube method. The DSC result coincided with the results of XRD in such a way that the chitosan as well as the derivatives were weakly crystalline (Alipour et al. 2019; Ferreira et al. 2020).

Figure 3 a: Thermogram of chitosan 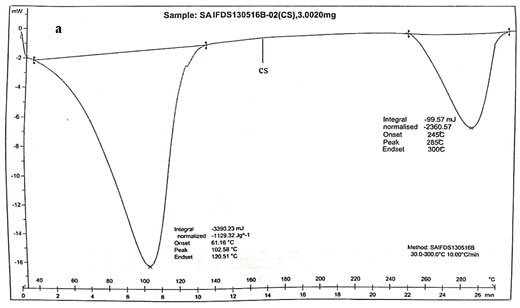 Figure 3 b:  Thermograms of N-alkylated pyrrole derivatives of chitosan. 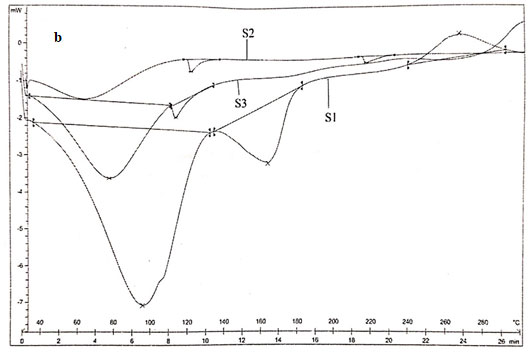 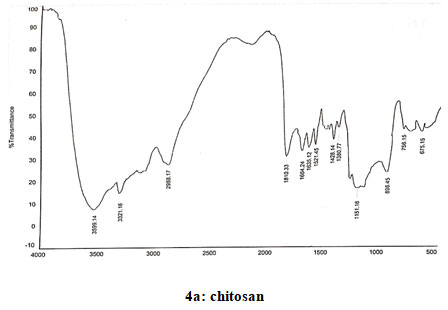 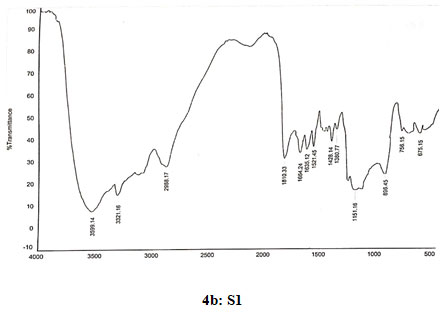 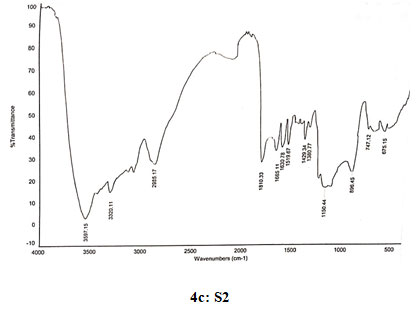 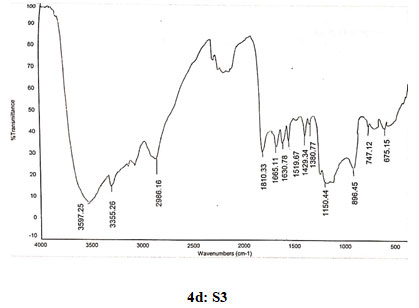 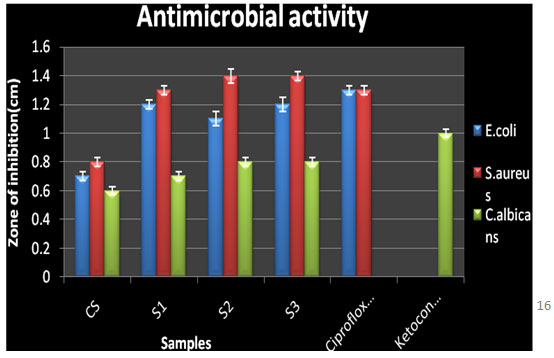 The findings of the present study determine the antimicrobial activity that showed an improved antibacterial and antifungal activity as compared to chitosan. The activity of the N-propylpyrrole chitosan was maximum and comparable to that of the standards suggested that with increase in alkyl chain length the solubility and hence antimicrobial activity of the synthesized compounds also increased. The results may play a significant role in designing more potent chitosan derivatives. For this study, three novel N-alkylpyrrole derivatives of chitosan were synthesized by substitution on the reactive amino group of chitosan and characterized by FTIR and NMR spectral study. The compounds had low crystallinity and thermal stability comparable to chitosan.

The laboratory facilities for this study were provided by the Amrita School of Pharmacy, Amrita Vishwavidyapeetham, Kerala, India.