The study of biofilm formation has importance in a broad scale of industrial applications such as health and cosmetics products, food, water, paper mills, medical health and pharmaceuticals. Manual process for the optimization of different salts for growth of bacteria is labour intensive work and has low precision. In this study, we have used design expert software for biofilm yield optimization of a strain of Chroococcidiopsis cubana. C. cubana was exposed on outer surface of the monuments due to adverse environmental conditions and formed the blackish biofilm on it. This biofilm was grown in culture media and their DNA was extracted for strain confirmation. Strain was confirmed by 16s rRNA gene sequence using Sanger sequencing. The response surface method was used to optimize the concentration of two main components NaNO3 and K2HPO4 among various salts of BG 11 media. Response surface methodology (RSM) was studied by ANOVA coefficient estimation using F – test with very low probability value. The obtained goodness of fit was significant (R2 = 0.99). Estimation of coefficient was used for calculation of t and p – values and decided their significancy. The model having p value less than 0.05 was considered for optimization. Desirability of optimization was resolved from contour plot having concentration of NaNO3 = 13 and K2HPO4 = 6.50 for optimum biofilm yield. Using these parameters, the in vitro model of Chroococcidiopsis cubana resulted in a yield of 20 g/l biofilm in 10 days, hence can be successfully employed for in vitro cyanobacterial biofilm yield of Chroococcidiopsis cubana.

Mehta D, Sivan P, Shah D. Statistical in vitro Model for Upscaling Biofilm of Chroococcidiopsis cubana by Media Optimization and its Protocol for DNA Extraction. Biosc.Biotech.Res.Comm. 2020;13(4). Available from: <a href=”https://bit.ly/383rk9D”>https://bit.ly/383rk9D</a>

Biofilm is defined as sessile microorganisms growing on solid surface and embedded in matrix of extracellular polymeric substances (Garrett  et al., 2008). These microorganisms include several bacteria like Esherichia coli, Pseudomonas aeruginosa, Staphylococcus aureus etc as well as some blue green algae like Noctoc sp., Phormidium sp., Microspora sp., Chroococcidiopsis sp. etc (Hancock  2013; Ljaljevic-Grbic  et al., 2010; Miller  et al., 2009). Chroococcidiopsis sp., a blue-green alga, has desiccation tolerance due to the thick polysaccharide sheath on the outer surface of the cells (Knowles & Castenholz, 2008). In some species such sheaths have the ability to self-recognise the surfaces. Due to this, cells auto-aggregate mostly at the bottom of the broth culture flask. Hence, exopolysaccharides are also known as auto-agglutinins. This is the first stage in the whole process of biofilm formation (Trunk et al., 2018).

The study of biofilm formation has importance in a broad scale of industrial application such as health and cosmetics products, food, water, paper mills, medical health and pharmaceutical (Molobela & Ilunga, 2012).  In vitro production of biofilm is a laborious and cumbersome task. Hence, it is necessary to optimise some components for enhanced biofilm yield through reliable and successfully working statistical tool like response surface methodology (RSM) (Bratchell, 1989; Lundstedt et al, 1998; Mirhosseini & Tan, 2009; Khuri & Mukhopadhyay, 2010). Growth rates and yield of the species dependent on the concentration level of NaNO3 and K2HPO4 (Rippka et al., 1988). In  the present work, Chroococcidiopsis sp. was isolated from biofilm and obtained pure culture by streak plate method. Central composite design (CCD) of RSM has been applied to obtain the optimized concentration of two main salts components NaNO3 and K2HPO4 of BG 11 media for in vitro biofilm yield. DNA was extracted from biofilm and was amplified using 16s rRNA marker for strain confirmation.

Isolation of Microorganism: Surface biofilm of the endolithic Chroococcidiopsis sp. was collected during post monsoon period from the dome of the Arts Faculty building (MSU campus) Vadodara, India (Fig. 1A). The biofilm was immersed in petri plate having sterile distilled water and kept for 24h. Clump of biofilm was segregated with the help of needle and isolated by streak plate method in agar (Rippka et al., 1988). Culture was maintained on agar plate and sub cultured every two weeks.

Growth medium : BG 11 medium as described by Rippka et al., (1988) having pH 7.2 was prepared as control. A 250 ml Erlenmeyer flask containing 100 ml of media was inoculated and incubated at 27 – 30 ⁰C temperature in 2500 Lux white light for 14h and 2h rotatory shaker at 100 RPM for 10 days.  The biofilm was separated by centrifuging at 4000 RPM for 10 mins. Supernatant was discarded and yield of biofilm was measured. The same procedure was repeated for all the experimental flasks.

Experimental design for optimization : CCD was selected to optimize the concentration of NaNO3 and K2HPO4 for enhancing the yield of Chroococcidiopsis sp. The experiment was designed by the Design Expert 7.0.2 (stat-ease, USA). The range of the variables of NaNO3 and K2HPO4 were selected from preliminary study. The lowest and highest values of the variables have mentioned in table 1. Central composite design with 22 factorial gives 4 star points and axial points having 5 replicate at the centre as central point leading to 13 runs were engaged for the optimization of the concentration (Bradley, 2007). For statistical calculation, the variables were coded by equation 1:

Table 1. Range and Levels of variables

Identification of strain by 16s rRNA gene sequences: DNA was isolated from biofilm cells using the protocol followed by Tillet and Neilan, (2000) with some minor modifications. Add 50 µl of TER buffer (10 Mm Tris HCl, pH 7.4; 1 mM EDTA pH 8; 100 µg/ml RNase A) into tube containing cell pellets. 750 µl freshly prepared XS buffer (1% Potassium ethyl Xanthogenate, 100 mM Tris HCl pH 7.4, 20 mM EDTA pH 8; 1% SDS; 800 mM ammonium acetate) and 10 µl RNase A were added and mixed by pipetting.  After proper mixing, the solution tube was incubated at 70 ⁰C for 60 min. After incubation, tube was kept on ice for 30 min. Cell debris was removed by centrifugation at 14,000 rpm for 10 min. DNA was precipitated in supernatant by adding chilled ethanol. The DNA pellet was obtained by centrifuging at 12,000 rpm for 10 min. DNA pellet was washed with 70% ethanol and air dried. Then, TE buffer was added (Tris HCl 10 mM and EDTA 1 mM) to dissolve the pellet.

Amplification process was carried out by primers DNM1 F 5’GAAAGCCTGACGGAGCAATA 3’ and DNM1 R 5’ CGGGACTTAACCCAACATCT 3’. PCR reaction mixture (20 µl) was prepared by mixing 10 µl Dream Taq master mix, 0.5 µl forward and reverse primers from 1:10 stock, 1 µl template DNA and 8 µl MilliQ water. 35 PCR cycles were performed, initial denaturation at 94 ºC for 4mins, denaturation at 94º C for 30 secs, elongation at 55 ºC for 45 secs, extension at 72 ºC for 2 min and final extension 7mins at 72 ºC. DNA purification was carried out by GeneJET Gel Extraction (Thermo scientific). The purified DNA amplicon was subjected to Sanger sequencing. The identity of the strain was confirmed by BLAST analysis of obtained sequences with NCBI database (https://blast.ncbi.nlm.nih.gov).

Isolation, Biofilm yield and Strain confirmation of Chroococcidiopsis sp. by 16s rRNA gene sequences: Chroococcidiopsis sp. isolation was done through streak plate method and individual colonies were observed on agar plates (Fig 1A). The BLAST analysis of sequence data revealed the identity of the isolated organism as C. cubana. The sequence was deposited in NCBI GenBank data base with accession number MN950976. The biofilm yield of single colony grown in control and experimental flasks for 10 days were recorded (Table 2). Except run 4, the biofilm yield of all experimental flasks were significantly higher than of control.

Figure 1: Isolation and experimental set up of CCD in lab

is the predicted yield, X1 is K2HPO4 and X2 is NaNO3 ANOVA uses F – statistic to test the equality of means. F – test had very low probability value [(Prob>F) < 0.0001]. Hence, this model was highly significant for this experiment (Zheng et al., 2008). Goodness of fit of model was determined by determination coefficient (R2). Determination coefficient, (R2) value was 0.99 owing to which 99 % sample variation was qualified the variables, only 1% of the total variance could not be explained by this model. Adjusted determination coefficient also had similar value. Hence, the significance of the model was confirmed at required confidence level. Standard deviation (SD) was 0.47. Smaller the value of standard deviation, more precise the data. Because larger value of SD increases the acceptable range within the deviation. Coefficient of variation or pure error was 2.95%. Pure error is lower than 5% so it was acceptable (Box et al., 1978). Moreover, adequate precision had a value of 48.72. Adequate precision measures the signal to noise ratio. A ratio greater than 4 is desirable (Ahmadkhanjha et al., 2015). Because the model has a high signal so it’s more reliable for optimization.

Coefficient estimation for model: The significance of coefficient was determined by t value and p value. Both these values were computed and mentioned in Table 4. Higher the value of t – test and smaller the p value, the results are more significant (Lee & Wang, 1997). Our model intercept had large t value suggesting this model is highly significant.  In model, variable X1 had small p value as compare to variable X2. Hence variable A was more significant than variable B in this model.  The 2D contour plot represents graphical view of the regression equation (Wang et al., 2007). It had shown the effect of both the variables on yield of biofilm. Based on centre point of the contour plot, the obtained value of variable A (NaNO3) and variable B (K2HPO4) were 13 and 6.5 respectively (Fig 2). Hence, both these values were found to be optimal for biofilm yield in 10 days. For optimization, the Design Expert 7.0.2 software suggested 0.95 and 1 as the two desirability standards. In current study, we proceeded for desirability 1 obtained value for A (NaNO3) = 13 from lower limit 10 and upper limit 15 and value for B (K2HPO4) = 6.5 from lower limit 5 and upper limit 8. It was given 20 g/l yield in 10 days. 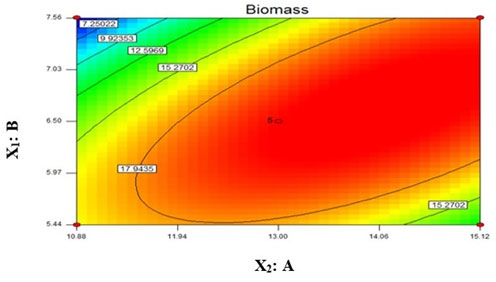 From the above results, it was concluded that variables A (NaNO3 = 13 g/l) and B (K2HPO4 = 6.5 g/l) were giving similar results in experimental design data and for desirability of optimization. Hence, these values of the variables were used for upscaling the biofilm yield. The optimized model was successfully employed for in vitro cyanobacterial biofilm yield of Chroococcidiopsis cubana.

The authors (DM and DS) wish to acknowledge Research and Consultancy Cell (RCC) Project sanction no. RCC/Dir./2018/56/7 of the M. S. University of Baroda for research grant. The authors are also thankful to plant anatomy lab (Dr. K. S. Rajput) for providing necessary facilities to carry out the molecular study.