With the time, as there is advancement in medical technology, there is also a huge increment in number of physical disabilities and diseases. Among them some are curable and some aren’t. Low back pain & sub-acute pain growing simultaneously. Ignorance of such pain becomes chronic disease which not only affect our spine, but also affect our work. Cervical traction is most preferred treatment for cervical spine disabilities in intervertebral disc, the vertebrae, the ligaments, and the facet joints but its effectiveness as a part of physical therapy is a matter of discussion. First step for spinal column diagnosis is vertebra detection. Due to presence of skull bone in C-spine region this task becomes more difficult as X-ray images considered are noisy low contrast images. In this paper an automatic approach is proposed for calculating intervertebral posterior height and based on the distance between different vertebrae traction force at C-spine region is calculated.

The Proposed method consists of following steps: 1) Vertebra detection 2) Intervertebral posterior height calculation 3) calculating traction weight. Data of 17 volunteers and X-ray Image data of 12 cases are taken to validate our approach by using a total of 60 cervical vertebrae. The objective is to find ROI and localize cervical spine centers. Thus, an automatic approach is proposed which gives generalization to traction therapy. Image analysis of C-spine is achieved with an accuracy of 98 %. Image characterized as normal or abnormal cervical image; also, exact traction weight is calculated using physics behind traction. 8% of the body weight will be the ideal weight to start traction with minimal side effect and highest therapeutic efficacy. Therefore, clinicians could adopt this weight as minimum weight in managing neck disorder requiring traction and goes up to the weight as calculated by proposed algorithm.

In this paper, a smart approach is discussed to detect and localize changes in x-ray images of the cervical spine. The method discussed here for the treatment of cervical pain is a combination of image Processing and Physics theory, this analysis in future bears a major aid to doctors and will save considerable time. The goal of this research is to evaluate biomechanical efficacy and to reduce the range of the traction force (25lbs-4lbs) used for the treatment of cervical spinal traction by analyzing spinal structure. The study will help to improve outcomes, quality of care, and provide some standardization of treatment. For spinal column diagnosis the first step is vertebra detection. This task becomes more problematic in case of the cervical X-ray images as these images are usually characterized by their low contrasts and noise due to skull bones.

Preprocessing is done to locate and enhance the spine region of interest in x- ray images; this stage is usually followed by the processing stage which includes the boundary representation and segmentation algorithms based on feature vector extraction. Image processing has been used in all areas of research. It has become an important tool for visualization and analysis of data. In recent years, the field of medical imaging has required that the role of image processing to expand for better results (Huihao et al., 2019).

References till 2019-2020: In current scenario, back pain is a leading cause of work absenteeism. Ignorance of such pain becomes chronic disease which not only affect our spine, but also affect our work, afterwards it become major symptoms of disabilities. (Ehrlich et al., 1999; George E 2003). Three-dimensional imaging tests like MRI and CT scan, is ideal for analyzing& visualizing pathology of the IVD (intervertebral disc), neural structures such as the spinal cord. Imaging methods provide superior structural information and a better resolution (Schmitz et al., 2011); (Runshengwang et al., 2014); proposed a new method in which semiautomatic image analysis routine is used to analyze dendrite and synapse characteristics in immune-fluorescence images. Another method effective in reducing pain or improving intervertebral motions is HVLA-SM (High velocity low amplitude spinal manipulation) (Reed et al., 2015).

Another area of concerns is the cervical spine trauma which causes majority of spinal lesions. Many of these problems are the consequence of an abnormal spinal motion. A model of the human cervical spine was developed with a focus on accurate representation of the cervical spine using image processing algorithms. Models of each segment were constructed from the basic building blocks of the cervical spine: the intervertebral disc, the vertebrae, the ligaments, and the facet joints. The capsule ligament stiffness made an impact on segmental mobility and vertebral spatial position, and the sagittal angle of articular facet joint exerted an influence on disc pressure distribution. To predict effectiveness possibility of cervical traction the least absolute shrinkage and selection operator regression model was used to select potentially relevant features (Huihao et al., 2019; Yang et al., 2020).

To find the accuracy of traction treatment a small survey was conducted under which data of 17 volunteer data and 12 X-ray image data were collected from 3 hospitals. In which 16 wereales and 13 were females. Following observations are mention as: Traction force is not only dependent to the fractional part of body weight but also on several other factors which is not included in the main parameters for applying the traction force. For cervical traction the force applied i.e. 1/7th part of body weight and for lumbar traction the force applied i.e. 1/3rd of body weight is not practically implemented, but it varies according to age, gender, bone density, blood pressure, etc which is not included at present in the treatment. On the basis of survey conducted, the following data were recorded. The following data were taken from Narmada   Trauma Centre (Bhopal), Rajiv Gandhi Hospital (Trilanga, Bhopal) and Peoples hospital (Bhanpur, Bhopal) (Yang et al., 2020).

Table 1. Survey Report Of Some Patients Who Were Going Under The Treatment of Traction

This data leads to us to do work for the improvement of traction treatment. The proposed research is a smart approach in which cervical vertebra detection method using a statistical algorithm and template matching approach based on the Spectral Transformation technique. In this method an edge-based recognition process used to extract vertebra shapes and its invariance to scale change, rotation and translation. This research is based on following steps:

A. Modelling –modelling is aimed to make template of the vertebra, edge detection and to apply Hough transform.

Figure 2: Flow chart for developing an algorithm for Spinal Traction. 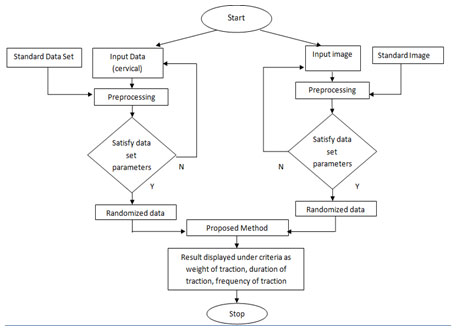 From the free body diagram establishing momentum equation about the bottom

Ty.dT=Wy.dw Where: the distance from the bottom to the center of mass is

And the value of µ = 0.2, Now equating the values in the equation

The exact W i.e. traction weight can be calculated as

The calculations have been coded and required results have been obtained.

In this research results have been calculated for radicular pain which occurs when the intervertebral separation is < 3mm. It has been suggested that the present research is not for patients with radiculopathy as it describes neurological condition. As the data set used in this research consists of X-ray images. The major problem faced while using X-Ray images are, the image data base is blurry, so vertebrae localization becomes the challenging task to perform manually. In order to enhance the image and to find region of interest image processing algorithm is used (Huihao et al., 2019).Next step is to resize the image [Fig-4].Longest segment has been detected using spectral transformation technique, in this research we use Hough transform for finding longest segment [Fig-5]. Following operation is formed to get Region of Interest. 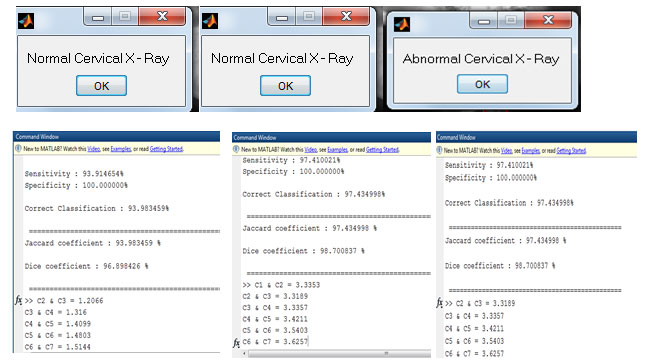 After characterizing image as normal or abnormal image, an algorithm used to detect amount of traction weight required.

Figure 9: C++ code to detect traction weight based on body weight of patient under medical supervision for normal and abnormal images from image database collected from Peoples hospital, Bhopal.

Table 3 shows the applied and proposed traction weights for the patient under medical supervision for neck disorder. 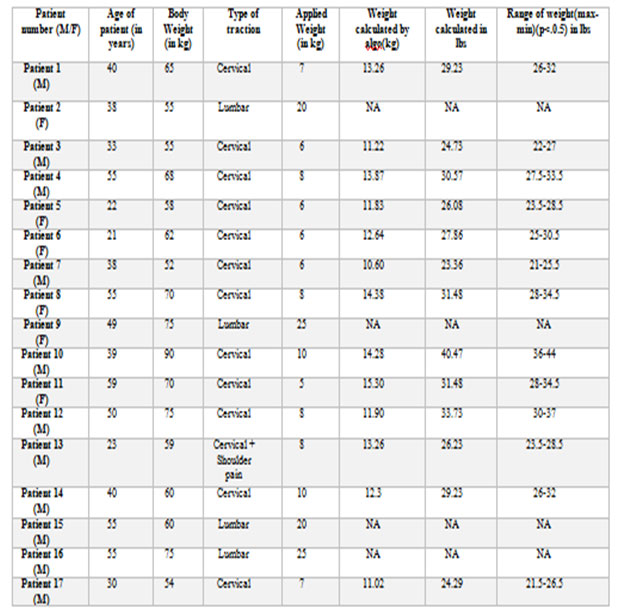 Due to load, the intervertebral posterior height reduces. In this research, image processing algorithm is used to detect the intervertebral posterior height. As the study says for spinal traction relieves pressure on cervical spine, it can be done manually or mechanically. To get better results x-ray images of cervical area must be studied along with the symptomatic problems. In this research both the symptoms as well as image analysis is performed in order to get better results (Fabian et al., 2012; Runshengwang and Ward, 2014). None of the study at present will work on reducing the range of traction force (25lbs-40lbs), as the amount of force applied will depends on the experience of physiotherapist. Most of the researches are using image data base of CT scan or MRI imaging but X-ray imaging is economic among the imaging technique used. 8% of the body weight will be the ideal weight to start traction with minimal side effect and highest therapeutic efficacy. Therefore, clinicians could adopt this weight as minimum weight in managing neck disorder requiring traction and goes up to the weight as calculated by proposed algorithm (Martiel et al., 2015).

In this paper, a new smart approach is used to detect C-spine vertebrae in X-ray images. A model of the human cervical spine was developed with a focus on accurate representation of the cervical spine using image processing algorithms. Models of each segment were constructed from the basic building blocks of the cervical spine: the intervertebral disc, the vertebrae, the ligaments, and the facet joints. This research contribution is generalized traction weight calculation. The objective is to find ROI and localize cervical spine centers. The results of the study indicate that the no other algorithm is present using smart image processing algorithm for calculating exact traction weight in case of cervical spine.

Individually in image processing algorithm the model was in reasonable agreement with the experimental data, and compared better than current models. Furthermore, it was recommended that the future goal of this model would be to implement so that a Clinical prediction has been developed which will improve decision-making and reduce time & cost. Thus, an automatic approach is proposed which gives generalization to traction therapy. Considering the advantages (feasible, accurate and economic) of the goal, if achieved, this may be used to develop traction machines in future which will be algorithm based and would work automatically on the basis of the factors to be considered while applying the therapy. Angle of head and table selected is 250, in future different angle settings will be done for C1-C2 & C6-C7.

The authors and planners have disclosed no potential conflicts of interest, financial or otherwise.

Runshengwang and Ward MM (2014). Arthritis of the Spine ChapterSpinal Imaging and Image Analysis Volume 18 of the series Lecture Notes in Computational Vision and Biomechanics pp 31-66.