Sacred groves are virgin forest patches with rich diversity, conserved by the local people for centuries with their religious and socio-cultural practices. It connects the past and present community in terms of cultural and religious beliefs and taboos that the deities reside in the sacred groves that protects them from different calamities. Sacred groves can play a vital role in biodiversity conservation because these sites are undisturbed by people. Sacred groves are found in different parts of the world where ethnic people live. In India, sacred groves are more common in the Western Ghats, Northeast India, and Central India, etc, particularly where the indigenous communities live. Several plants and animals are well conserved in these sacred groves. In recent days, due to deforestation and rapid urbanization number of the trees and associated fauna species is decreasing rapidly.

In this regard, the present scientific study was carried out in two blocks of Bankura district in West Bengal to document the sacred groves, and its role in biodiversity conservation through its legends, lore, and myths. In these studies, six (6) sacred groves were documented from five (5) villages. It has been noticed that honeybee prepare hives in these sacred trees. They show preference in habitat selection by selecting sacred trees as secure habitat for hive formation and neglecting other trees present surrounding sacred trees. Many other animals are also protected in these sacred groves; Honeybees are also getting direct protection through traditional rituals and religious taboos from poachers and chasers. So, conservation of these sacred trees and traditional thoughts is needed for the conservation of local fauna. But more research on the specific site selection of sacred trees by honey bees for hive formation is needed for understanding their behaviour and successful conservation.

Sacred groves (SGs) are a small fragment of nature saturated with diverse vegetation, devoted to the local deities, and considered by local people as divinity proprietary. Sacred groves and sacred trees are protected, unmolested, and conserved for centuries by the local communities by performing religious rubric, customs, and traditional rituals. Human beings and nature are connected deeply through these traditional worship practices. In many parts of the world, various sacred groves (SGs) are observed where local people worship many spiritual activities. These type of SGs are commonly observed in many countries like China, Srilanka, Bangladesh, Nigeria, Mexico, Syria, Ghana and it is very common in North-Eastern states of India like Manipur, Mizoram, Arunachal Pradesh, and also in Bihar, Jharkhand, Orissa, Madhya Pradesh, Andhra Pradesh, Karnataka, Tamil Nadu, West Bengal, and other states.

In Maharashtra it is locally known as Devrai and Deviahate, in central India, these are known as Sarana, Orance in Rajasthan, Kavu, or Nagavanam in Kerala, Sidharavanam in Karnataka, Nandavana in Tamil Nadu, and Kavu in Andhra Pradesh. In different parts of West Bengal, these SGs are named according to the names of God and Goddess worshipping in that particular area. Bankura is a traditionally wealthy and culturally opulent district of West Bengal and the witness of an enormous number of sacred groves and sacred trees, preserving nature through its diverse traditions and customs (Mitra et al., 2015).

Sacred groves also provide habitat and protection for many ecologically valuable keystone species, which contribute to the maintenance and enhancement of biodiversity in many parts of the world. SGs, also act as nursery and storehouses of tribal and folk medicinal plants. Valuable medicinal plants like Azadirachta indica, Holarrhena antidysenterica Hemidesmus indicus, Aegle marmelos, and Leucas aspera are commonly found in various sacred groves. Deb & Malhotra (1997) did the pioneer research activity on sacred groves of West Bengal. In the Bankura district, from 26 sacred groves, 114 species of flowering plants belong to 52 different families were documented by Basu (2009).

Among three community development blocks of Bankura district namely Barjora, Chhatna and Saltora total of 51 economically important plant species were reported by Mitra et al., (2015). Dutta and Mondal (2018) reported the scientific study related to social customs and its role in Bat conservation at Majdiha village of Bankura District. In West Bengal and other parts of India, local people put some symbols like stones, clay deities of horse, elephants and other animal model, pictures, natural symbols like a snakehead, symbol of lotus and many spiritual signs under any big tree and shows respect of their faith upon nature or God or respect to their ancestors (Dutta and Mondal, 2018).

Sometimes ropes are knotted surrounding the trees and usually, local peoples do not cut the trees, enter these sacred zones silently without eating. These groves are undisturbed by villagers even they do not climb on the trees, even not cut the dead woods, green or brown branches. So, in these places, many animals reside especially birds, small reptiles, mammals, and many insects and they are protected because of faith in nature or God of people of that area. Honeybees are one of the best and most important pollinators in the world and honey-producing and wax producing insects. Near about 16% of flowering plants in the world and 400 agricultural plants are pollinated by honeybees (Crane and Walker, 1984).

Michener (2007) reported that 17533 species can be found throughout the globe which is categorized under 443 genera and seven families but of them, only 8 species with 43 subspecies are considered as honeybees.  Honeybees come under the genus Apis belonging to the family Apidae under the order Hymenoptera and class Insecta (Engel, 1999). In India, five species of honeybees are commonly found, viz. Apis dorsata (Rock bee), Apis laboriosa, Apis cerana (Indian bee), Apis florae (Little bee), and Apis adereniformis. Apis mellifera (European bee) is not native to India and has been introduced from outside (Jack et al., 2016).

Similarly, it provides natural habitat for many endemic, rare, primitive, and economically valuable plants along with a good number of wild animals, amphibians, reptiles, birds, variety of butterflies and insects (Samati and Gogoi, 2007; Sharma 2020). This paper aims at documenting the rituals observed in two blocks of Bankura district and scientific observation have focused on how traditional regulations and religious rituals protecting and conserving various animals especially the honeybees (Apis dorsata) in this region, and the selection specificity of honeybees (Apis dorsata) toward sacred trees for their hive formation.

During the present study, a total of six (6) sacred groves (Table 1) are observed in the study area. Plants that are commonly conserved in these sacred groves due to the religious belief are Ficus benghalensis, Madhuca longifolia, and Shorea robusta. Plant diversity of an ecosystem plays an important role in conserving local fauna. These sacred groves have a great influence on the local flora and fauna of the region as well as the microclimate of that locality. Many wild animals and domestic animals reside there freely. So, indirectly sacred groves conserve local flora and fauna based on their sacred faith (Devakumar et al., 2018). 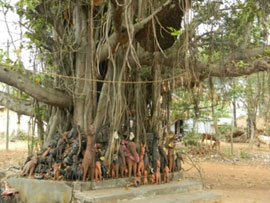 In different parts of the world, sacred groves are found in various forms, including burial grounds, cremation grounds, and sites of ancestral or deity worship (Bhagwat and Rutte,2006). Various types of myths and faiths are associated with these groves and villagers strictly respect the dignity of that place. The types of rituals that are performed in the sacred groves vary in a different community and also vary from region to region. In these villages, the most sacred groves are dedicated to worshiping “Manasadevi”, the goddess of snakes.

These sacred groves are called “Manasa than” and people put clay deities of a horse, elephants under the trees. Similar types of sacred groves are commonly observed in Southern Kerala where sacred groves are dedicated to Naga (Sarpa God). In Northern Kerala, the groves are named on the presiding deities and locally known as Kotta in Malayalam and are different forms of the Mother Goddess (Kali), Vaishnava, or Shivaite forms. Panda et al. (2003) also reported 10 important sacred groves of Santhals from the Bankura district of West Bengal (Sharma and Kumar, 2020).

Honeybees are economically highly important and profitable insects and are also responsible for valuable ecosystem services like pollination. Gallai and Vaissiere (2009) reported that, the total economic value of pollination through honeybees to agricultural production was estimated at about € 153 billion, which was 9.5% of the value of total agricultural production worldwide used for human food for the year 2005. Apart from honey pollination and honey production, honeybees are also involved in making other goods like bee wax, pollen, propolis, bee venom, etc (Sharma and Kumar, 2020).

Figure 2: Other sacred groves in the study area 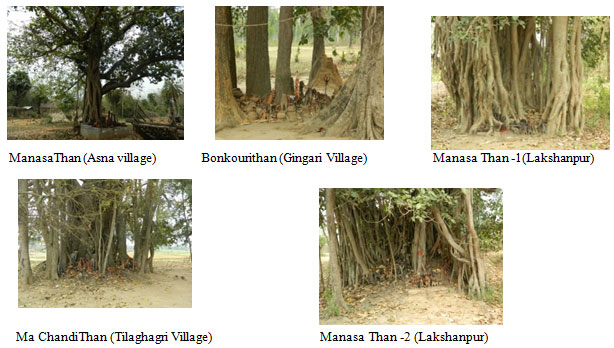 This discriminating study revealed that honey bees are also showing habitat selection specificity and preferring the sacred trees, which are unmolested and protected by religious thoughts. Honey bees are also feeling protected in the sacred trees and all the sacred trees in the study area are saturated with more than 10-20 beehives in each where spiritual and religious rituals being performed. Moreover, previous studies suggest that traditional taboos in sacred groves help to protect various species otherwise considered as dangerous or pests like snakes in Western Ghats, India, the sclater’s monkey (Cercopithecus sclateri) in Nigeria, rhesus macaques (Macaca mulatta) in India, as well as the snow leopard (Panthera uncia) in China (Li et al., 2014; Saraswat et al., 2015; Baker et al., 2018; Yuan et al., 2020). In this study area traditional taboos in sacred groves provide a similar type of protection to honey bee colony as well as other animals.

The present study can conclude that traditions and beliefs protect local forest patches as well as protect various animals. So, sacred groves are very significant in conserving endangered, threatened and vulnerable species of flora and fauna from being extinct. Sacred groves and sacred sites are now being challenged by many economic and social issues, and thus degradation of such type of SGs also reduces the chance of natural habitat of many animals. So SGs have immense importance for conserving animals. In this area honey bee, Apis dorsata populations are conserved through years in these sacred trees. So, for conserving such animals’ government and non-governmental organizations should take up some strategies with the help of local people to conserve these holy places for the conservation of local flora and fauna and betterment of humankind. Similarly, more research on the specific site selection for hive formation and behaviour of honey bees are needed for understanding their behaviour and successful conservation for honey bees and other local fauna.

We want to acknowledge the Principal, Bankura Sammilani College, Bankura for his kind help and support for conducting the survey work. We acknowledge the help received from the members of Korakanli, Tilaghagri, Asna, Lakshanpur, and Gingari village, under the Onda and Taldangra Blocks of Bankura districts for documenting their religious and socio-cultural practices.

Conflict of Interest: The authors declare that they have no conflict of interest.