Keratinases from Aneurinibacillus aneurinilyticus are capable of degrading keratinous proteins. Salt precipitation and diethylaminoethyly determined the purification and characterization of the enzyme. Ion-exchange and gel permeation chromatography, and SDS-PAGE. Physicochemical factors like pH, temperature, metal ions, enzyme inhibitors and substrate. To study Km and Vmax various concentrations of keratin were used for   the activity of enzyme. Gel permeation chromatography with 20.84-fold purification. 203.87 U/mg specific activity showed 34KDa between 14 to 31KDa in SDS-PAGE. The number was stable at pH 7.0-9.0 400-500C, and optimum at pH 9.0 and 500C.

Further stimulated by Mg2+, Ca2+, K+, Fe2+, Zn2+, Mn2+, and Na2+ inhibited by Cu2+, Co2+ and Hg2+. Ethylene diamine tetra acetic acid with the highest stimulatory effect was inhibited by Di-isopropyl fluoro phosphatase and phenyl methyl sulfonyl fluoride. Enzyme was stable with Tween-60, TritonX-100 and TritonX-114 declined with ß-mercaptoethanol. It hydrolyzed several keratinous substrates as keratin and casein were 100 and 85.47% utilized with Km=3mM, Vmax =249µmol/ml/min. Xerophytic endophytes are treasure houses as they tolerate biotic and abiotic stress, are stable at high temperatures and pH are selected, such keratinases can be used in leather processing and detergent industries.

Keratinase are used in several biotechnological processes, such as removing hair and feather for the production of feather meal, clearing the obstructions in the sewage systems and dehairing process in the leather industry (Gupta et al. 2002). Other uses include production of biogas, biodegradable films, glues, prion hydrolysis, wastewater processing, recovery of silver from X-ray films, drug delivery in medicine cosmetics and additives (Patinvoh et al. 2016; Almahasheer et al. 2022).

This work highlights the characterization and purification of the enzyme keratinase from Aneurinibacillus aneurinilyticus isolated from an endophytic xerophyte (Opuntia–ficus indica). Several studies have been done in the past on keratinase production, purification and characterization by bacteria. However, this paper is one-of-its-kind that has isolated endophytic bacteria from xerophytes in drought regions. These enzymes from such bacteria can tolerate high temperatures and pH which can be used in various biotechnological industries. The keratin degrading protein i.e., keratinases has diversified application in green technology. Therefore, there is a search for an efficient bacterial strain by the researchers (Almahashree et al. 2022). The keratin from poultry waste is degraded by the purified enzyme keratinases from B. licheniformis dcs1, has the efficiency to enhance the nutritional quality of the waste keratin from poultry, (Liaqat et al 2022).

Bacteria was grown in 1000 ml production media under submerged fermentation and fermenting broth at 10,000 rpm at 40C for 10 mins and it was centrifuged. Obtained supernatant was considered as a crude enzyme for purification purposes and at each step, enzyme activity was estimated. The crude enzyme from A. aneurinilyticus was partially purified further, ammonium sulphate precipitation was used at different saturation levels (10-80%) as per the standard chart with continuous stirring overnight under cold conditions to precipitate the desired protein.

Collected precipitate was centrifuged at 40C for 10 min., further protein pellet was dissolved in 20 mmol/L Tris-HCl buffer (pH8.0). Folin-Phenol reagent along with bovine serum albumin was used as standard for protein estimation. The protein sample was loaded into the activated dialysis membrane and sealed at both ends. The dialysis 150 membrane bag was suspended in 500mL (50 mM, pH 7.0) phosphate buffer was used. Experiment was carried out with four changes in the buffer (Kamble et al. 2020).

The dialysate obtained from the above step was concentrated using (DEAE-cellulose), chromatographic anion coloumn (1.5X30cm). Sodium chloride with different concentrations (pH-8.0) in 20mmol/L Tris HCl buffer was used to elute the sample at 6 ml/min flow rate for collecting the fractions (Cheng-Gang Cai et al. 2008). The concentrated enzyme was equilibrated with 100mM Tris-HCl buffer (pH8.0) and Sephadex G-100 (50cm X 1.7 Cm) to prepare for gel filtration. The eluted pure protein fractions were characterized at the rate of 1ml/min of the fraction collected using same buffer. 10% separating acryl amide gel and 5% stacking gel having 0.1% SDS were used to visualize protein bands through Coomassei Brilliant Blue R-250. The protein bands were then destained with acetic acid and methanol. Pure enzymes were used for characterization (Lammli 1970; Cheng-Gang Cai et al. 2008).

Bovine Serum Albumin 66KDa, Lysozyme 14.3kDa, Phosphorylase 97kDa, Ovalbumin 45kDa and Bovine Carbonic Anhydrase 31 kDa, were used as standard protein markers (Eun-Jan Jeong et al. 2010). Zymogram analysis was performed by using 2% keratin as substrate copolymerized with stacking gel of 4% and 10% resolving gel, the sample buffer and purified proteins together were loaded to polymerized gel. Tris-HCl buffer 0.01M having a pH of 9.0 Triton X-100 (v/v) 2.0% were subjected to electrophoresis, for about half an hour. To remove Triton X-100 the gel was washed with D. H2O and incubated at 370C for 30 min.

After incubating at pH-9.0 and 370C for 30mins in Tris-Cl, stained with Coomassie Brilliant Blue Dye R-250 for half an hour then de-stained, clear colourless zone was detected and considered as enzyme activity (Vermelho et al. 2009). For the characterization of purified keratinase, various physicochemical factors like temperature, pH, metal ions, enzyme inhibitors along with substrate were studied. Enzyme activity was noted using 0.1M acetate buffer (pH3-5), sodium phosphate buffer 0.1M (pH 6.0-8.0), glycine sodium hydroxide buffer (pH 9.0-12.0) with 0.1M Tris HCl buffer (pH 7.0-9.0) and temperature 10-800C were taken to study the effect of pH and temperature on enzyme activity. The residual activities were measured by studying the effect of temperature and pH on enzyme stability by incubating the enzyme solution at pH between 3.0-12.0 and temperature between 10-800C for 60 min (Murthy et al. 2019).

Different substrates such as haemoglobin, bovine serum albumin, fibrin, gelatin, keratin, and casein (1% w/v) were used for determining the enzyme Substrate specificity. The enzyme was incubated for10 min in each of the substrates. The degree of substrate hydrolysis was analyzed by protease activity using standard assay conditions (Gupta and Singh 2014).

Keratinase from A. aneurinilyticus and its molecular weight was determined by comparing the electrophoretic mobility of the marker proteins. Standard protein markers used were 97KDa (phosphorylase), 66KDa (BSA), 45KDa (Ovalbumin), and 31KDa (Bovine carbonic anhydrase) and 14.33KDa (Lysozyme). The mol. wt. of the purified enzyme was 34KDa when SDS PAGE was done (Fig.1a). Zymogram analysis showed a clear colourless zone against a dark blue background (Fig.1b). Similar results were observed with Kazzaz et al. (2015) revealing a single band at 26KDa both in zymogram and SDS PAGE with B. licheniformis H62.

Similar results of optimum pH and temperature with B. megaterium were reported by Saibabu et al. (2012). Using the organism Chrysosporium indicum as reported by Kumar et al. (2021) it also showed maximum keratinase activity at temperature 500C and pH-10. Yong et al. (2020) reported optimal temperature, pH 550C and 10.0 by B. subtilis S1-4. When these results of keratinase production were compared with all the researchers it was observed that the pH ranged between 8.0 -9.0 and the temperature between 50-600C (Kumar et al. 2021). 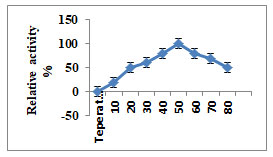 Keratinase activity on metal ions is presented in (Fig. 4). The metal ions, studied were Mg2+, Ca2+, K+, Fe2+, Zn2+, Mn2+, Na2+, Cu2+, Hg2+ and Co2+ at 1mM concentration. The percent residual activity was maximum with Mg2+, Ca2+, K+, Fe2+, Zn2+and Mn2+ while Cu2+, Co2+, and Hg2+ showed inhibitory action against keratinase from A. aneurinilyticus. Keratinase activity was inhibited by Hg2+, which signifies that Hg2+, might reduce the enzyme activity by binding to the SH-group present at the active site or Hg2+ may bind to the carboxylic group and also tryptophan residue to decrease the enzyme activity (Saibu et al. 2013; Ul–Haq 2020). While in case with A. aneurinilyticus some cations stimulated the keratinase activity. Saibabu et al. (2013) reported that the enzyme inhibition with Hg2+ is not due to the thiol group but is due to the tryptophan residue interaction or may be the carboxyl group present in the amino acid of that particular enzyme. The stimulatory effect of Fe2+, Ca2+and Mn2+ at 1mM increases the keratinase activity by acting as co-factors (Ul–Haq 2020).

Suntornsuk et al. (2005) reported that Ca2+ a divalent cat ions enhanced the enzyme activity of B. licheniformis FK-14, indicating the enzyme to be typical for serine protease. To maintain the enzyme structural confirmation or to stabilize the substrate binding and to form enzyme complex probably these metal ions may be acting as ion bridge. Keratinase from A. aneurinilyticus is highly activated by Mg2+, Ca2+ and Mn2+ proving that these metal ions confer for protection of enzyme against denaturation by heat performing a vital function in the maintenance of its active conformation (Kumar and Takagi 1999). Dada (2020) expressed that keratinase largely from gram-positive bacteria are mostly serine proteases as they possess two Ca2 + active sites thereby enhancing the enzymatic activity. The role of Ca2 + associated with the stability of the activated forms of the keratinases agrees with our results (Dada 2020; Ul–Haq 2020). 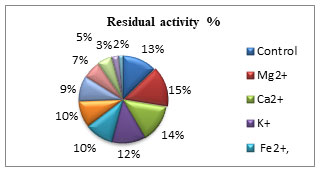 Keratinase was stimulated by EDTA, DTT, DFP while the most potent inhibitor was PMSF (Fig.5). When the surfactants results were compared the keratinase activity was inhibited (19.92%) to the maximum with β-mercaptoethanol and stimulated by tween-60 (84.11%), tritonX-100 (82.01%), tritonX-114 (58.65%) and SDS (32.46%) (Fig.6). Inhibition of the enzyme activity in presence of PMSF indicates the keratin belongs to serine group. This inhibition is due to covalent binding of PMSF to the residual serine and in activating it, there by blocking the sulphonate releasing hydrolytic sides for keratinolytic attack (Suntornsuk et al. 2005). The active site of protease was blocked by PMSF by sulfonating the essential serine residue, there by resulting in complete inhibition of protease activity (Jaouadi et al. 2013). However,reducing agents able to break the disulphide bonds in the substrate keratin releasing different hydrolytic sites for the keratinolytic attack (Dada 2020; Ul–Haq 2020). 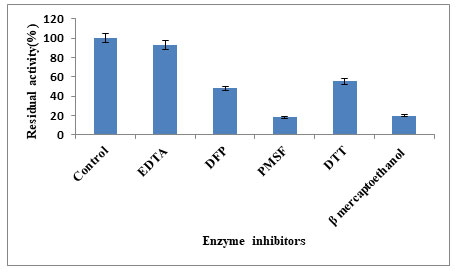 Moridshashi et al. (2020) reported maximum relative activity with feather keratin then was casein, and the least hydrolysed were keratin azure, gelatine and BSA. Prakash et al. (2010) reported high activity towards casein, followed by keratin, using B. halodurans PPKS-2.  Gang et al. (2008) also revealed maximum keratinase activity by using casein, BSA, Feather meal and feather keratin with the organism B. subtilis KD-N2. When the relative activity of different substrates was compared it was observed that the substrates which were having more disulphide bonds could be easily hydrolysed than the substrates having less disulphide bonds, suggesting the solubility depends on the high percentage of disulphide bonds in the substrates (Moridshashi et al. 2020).

Different concentrations of the substrate keratin (1mM to10mM) were used to determine the Km and Vmax of purified keratinase. Km and Vmax values were determined by LB plot and were found to be 3mM-Km and 249µmol/mL/min Vmax respectively (Fig.7). Lower values of Km suggest high affinity towards the substrates indicating that the enzyme-substrate complex is tightly held before the substrate is converted to the product thus indicating that keratinase enzyme from A. aneurinilyticus has great affinity towards its substrate keratin. 1/S on the X-axis, 1/V on the Y-axis, a double reciprocal plot gave a straight line suggesting that our enzyme obeys the Michaelis Menton equation. Km being independent of enzyme concentration shows the characteristics of enzyme under defined temperature and pH condition (Moridshashi et al. 2020).

Table 2. Specificity of keratinase in the presence of different substrate 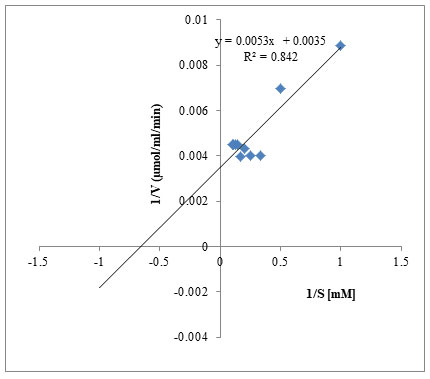 The findings of the present study showed that proteases of microbial origin are interesting, compared to plants or animal sources, as these enzymes from microbial origin possess all the features desired for biotechnological applications. Consequently, keratin can be transformed by keratinolytic microorganisms such as A. aneuinilyticus with low molecular weight of (34KDa). Generally, the molecular weight of bacterial keratinases varied between species and combination of various peptidases is required for keratin degradation. Thus, keratinase with low mol. wt. can be used in various biotechnological processes. Our studies of keratinase production from xerophytic endophytes will unravel the complex mechanism of keratinolysis and stability of the enzymes at high pH and temperatures which can be employed in various industries.

Ethics approval and consent to participate: Not applicable.

The work was carried out  in the Department of Microbiology, Gulbarga University, Kalaburgi, Karnataka, India, which is  greatly acknowledged
REFERENCES