Pesticides are chemical substances applied to mitigate the agricultural and domestic pests, but indiscriminate and unsafe use leads to their accumulation in the environment. Bioaccumulation of pesticides is of great public health concern due to their toxicity. The enhanced production and formulation of pesticides has posed serious problem through contaminating the nearby surroundings, which ultimately affect the biological diversity. Therefore, the present study is focussed on physico-chemical and microbial characterization of pesticides contaminated industrial soil nearby pesticides industry.  For this, the soil sample was collected from nearby pesticides industries from GIDC Naroda, Ahmedabad district of Gujarat state. The soil sample was analysed for various physico-chemical characteristics such as temperature, pH, electrical conductivity, moisture contents, water holding capacity, bulk density, hardness, chloride, alkalinity, sulphate, available phosphorus, total phosphorus, nitrate, nitrite, ammonium, total organic carbon and total organic matter.

For microbial characterization, isolation of bacteria was carried out using serial dilution pour plate technique and characterized morphologically, biochemically. The molecular characterization of the bacteria isolates was done by 16S rRNA sequencing. For this genomic DNA was extracted using CTAB method and amplified. The amplified DNA was sequenced for identification of bacteria. The isolated bacteria were identified as Bacillus licheniformis, Bacillus subtilis, Bacillus sp., Bacillus thuringiensis, Bacillus pumilus, Bacillus amyloliquefaciens, Bacillus velezensis, Kocuria flava, Pseudomonas sp. and Bacillus cereus. The obtain results infers that pesticides contaminated soil contains diversified bacterial species. As these bacterial species are growing in the pesticides contaminated soil and can be resistant to the toxicity of the pesticides, therefore, they may be the potential candidate for the removal of that compounds for environmental clean-up.

Pesticides are natural or synthetic compounds that are poisonous and can kill pests including insects, nematodes and rodents etc. Over the past few decades, pesticides and other agrochemicals have become a vital component of modern agricultural system, leading to a substantial improvement in crop productivity by controlling insects and other diseases (Carvalho 2017; Ali et al. 2019). The state like Gujarat, agriculture is one of the most important sector as it is the primary sources of livelihood for more than half (~ 60%) of its workforce (Planning Commission 2004; UNDP 2004). Currently, huge amount of pesticides are being used in agricultural field for protection of crops from the pests. Due to increasing demand of pesticides, a lots of manufacturing and formulation industries has been established in Gujarat to fulfil the requirements (Morillo and Villaverde 2017; Varjani et al. 2018).

On the other hand, enhanced Industrial and agricultural activities in recent years, in India especially in Gujarat has led to considerable contamination of air, soil and groundwater resources due to release of large amounts of pesticides and other chemicals in the environment (Morillo and Villaverde 2017; Varjani et al. 2018). Indiscriminate use of pesticides for pest infestation and vector control has drawn special attention of scientific community globally due to the multifaceted toxicity, mobility, persistence and recalcitrant properties (Fantke and Jolliet 2016; Liu et al. 2016; Varjani et al. 2018).

The rapid increase in pesticides industries also has polluted the nearby environment severely. Nevertheless, these pesticides possesses several negative impacts ranging from ecological pollution to damage of biodiversity (Pico et al. 2018; Barbieri et al. 2019; Köck-Schulmeyer et al. 2019). This can influences the physico-chemical properties and microbial diversity of the soil and possibly can cause a threat to both the environment and human health (Samant et al. 2018). Although, some studies show physico-chemical and microbial characterization of pesticides contaminated industrial soil from different industrial area of Gujarat (Doolotkeldieva et al. 2018; Ravi et al. 2019), but pesticides infused industrial soil of GIDC Naroda, Ahmedabad, Gujarat is yet to be studied. Therefore, the present study was carried out to characterize the pesticide infused soil from Gujarat for their physico-chemical analysis and microbial diversity.

Identification of bacterial species using 16S rRNA sequencing techniques: The identification of bacterial species was carried out by 16S rRNA gene sequencing. For this genomic DNA was extracted done using the CTAB method. 1 ml of well grown broth culture was centrifuged at 8000 rpm for 10 min. The pellet was resuspended in 200 µl of DW and 200 µl of buffer saturated phenol was added and incubated at 60ºC for 1 hour and centrifuged at 8000 rpm for 5 min. Again 400 µl of chilled ethanol was added to the aqueous stage of DNA precipitation. The precipitated DNA pellet was washed with 70% ethanol and resuspended in nuclease-free water (Das et al. 2019). The extracted DNA was used for amplification of the 16S rRNA gene sequence with primer A109 (F) AC (G/T) GCTCAGTAACACGT and 1510 (R) GGTTACCTTGTTACGACTT (Birbir et al. 2007, Mani et al. 2012). The PCR reaction combination contained 10X Taq buffer, 2 mM MgCl2, 10 mM of dNTPs,  10 µM of each primer, 1 µl of DNA, 2U Taq Polymerase. The reaction was initiated by denaturation at 94ºC for 5 min followed by 35 cycles of denaturation, annealing, and elongation. The reaction was terminated after a final elongation. The amplified product was exposed to electrophoresis on a 1.5 % agarose gel. The refined product was sequenced bidirectionally using an automated DNA sequences. 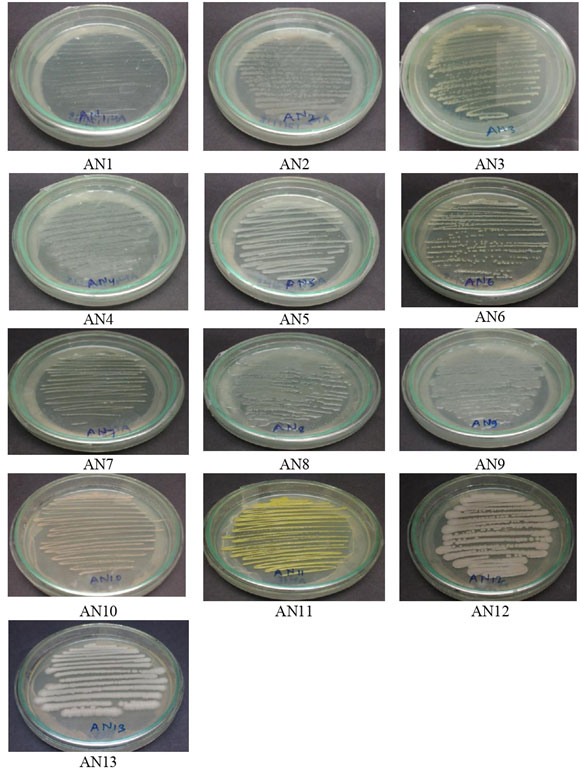 Figure 2: Phylogenetic tree based on 16S rRNA gene sequences showing the relationship among 13 strains and some of their closest phylogenetic relatives 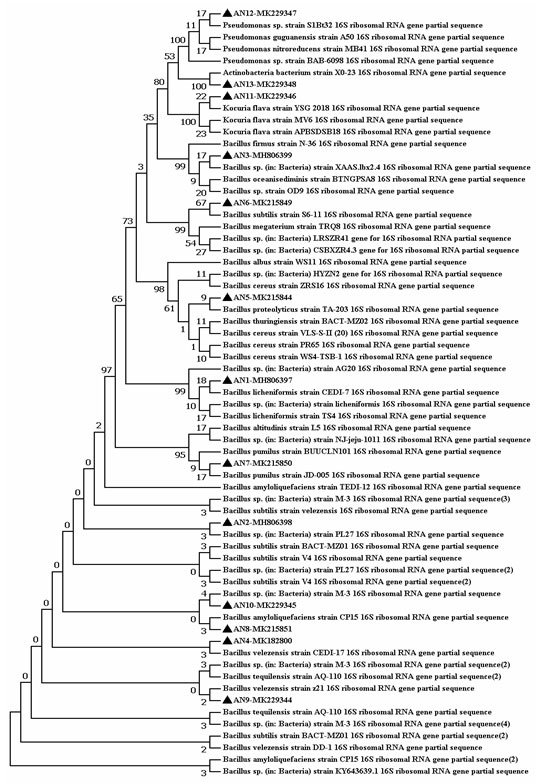 The present study show that slight variation in the physico-chemical properties of soil around the pesticides industry are occurred, which provide better environmental condition for  the bacterial diversity to grow. The study show that the soil around the pesticides industry of GIDC, Naroda, Ahmedabad district contains diversity of bacterial species. The soil is mainly dominated by different species of genus Bacillus. This finding was also supported was earlier studies for the soil contaminated with pesticides (Doolotkeldieva et al. 2018; Ravi et al. 2019).

The pesticides industries are adding different types of pesticides to environment which bring changes in natural properties of the soil. Pesticides are observed to influence the physico-chemical and biological properties of soil. The present study has indicated slight variations in observed parameters. The soil samples from five different sight exhibited similar pattern in selected parameters which indicates the changes brought about by deposition from industries. The microbial analysis show diversified bacterial species, mainly dominated by different species of Bacillus. As these bacterial species are growing in the pesticides contaminated soil, therefore, this study will help to determine the variations and possibilities for remediation.

The authors acknowledge the Central University of Gujarat, Gandhinagar to fulfil the required facilities for the research work. RKR was supported by fellowships from University Grant Commission, New Delhi, India.

Conflict of Interest: The authors declare that there is no conflict of interest.

Baishya, K., and Sarma H P (2014). Effect of agrochemicals application on accumulation of heavy metals on soil of different land uses with respect to its nutrient status. IOSR Journal of Environmental Science, Toxicology and Food Technology, 8(7), 46-54.

Samant, M., Pandey, S.C., and Pandey, A. (2018) Impact of hazardous waste material on environment and their management strategies. In: Microbial biotechnology in environmental monitoring and clean up. pp 175-192

Tamura, K., and Nei, M. (1993) Estimation of the Number of Nucleotide Substitutions in the Control Region of Mitochondrial DNA in Humans and Chimpanzees. Molecular Biology and Evolution. 10,512-526.