The results showed significant  paw oedema inhibition for TFAR at a dose of  40mg/kg which was assisted by the results of paw volume and diameter. The TFAR also strongly reduced proinflammatory cytokines levels and depicts the histopathological alterations induced by Freund’s complete adjuvant model.Finally it is concluded that TFAR protects synovial membrane by improving the health status exhibits promising anti-arthritic activity. This finding thus supports the traditional use of A. roxburghianus for arthritis.

Rheumatoid arthritis (RA) is a chronic systemic, progressive autoimmune inflammatory disease that occurs in several joints as symmetrical polyarthritis associated with swelling and discomfort. RA is a complex multi-system disorder whose primary site of damage to inflammatory tissue is in the finger and foot joints. Destructive cartilage and bone changes and bone outgrowths limit joint mobility(Bihani et al., 2014). RA is a chronic inflammatory condition characterised by pain, inflammation of the synovial membrane, inflammation of the peripheral joints, morning stiffness, articular tissue destruction and reduced joint mobility (Choudhary  et al., 2015; Uttra  et al., 2017). The anatomy and aetiology of RA is complex and unclear, can cause serious impairment, and eventually affects the capacity of a person to perform daily activities, reduces the quality of life, and causes premature death.

In conjunction with piperine, its root extract is used in the successful treatment of inflammatory bowel disease (Pamila et al., 2017) and its leaves have been reported for use in the treatment of sunstroke and urinary disorders(Bansod et al., 2010). Based on the above evidences for treatment of various diseases we  made an attempt  to analyse the anti-arthritis efficacy of Amaranthus roxburghianus. So we separeted the total flavonoids fraction using hydro-alcoholic solvent system and  analysed its efficacy for treatment of RA using in chronic models of albino Wistar rats.

A.roxburghianus leafy vegetables were acquired from near by Tirupati areas. The plant authentication was performed at Botany Department, Sree Venkateswara University, Andhra Pradesh, India with a  plant voucher specimen (Ref. No. 1656). The aerial parts of the plant were washed with tap water and  dried in the shade. The dried leaves were powdered in the grinder and  defatted with petroleum ether and successive extraction was carried out with ethyl alcohol: water with (70: 30) ratio, by the hot soxhlet process.

The hydro-alcoholic extract was concentrated under reduced pressure in a rotary evaporator (Heidolph Instrument,Laborota 4000, Germany). The dried crude hydro-alcoholic A.roxburghianus extract was collected and preserved in an airtight glass container at 4-8 °C until final use(Ajayi et al., 2018). The total fraction of flavonoids (TFAR) (60g) was derived from an eluted fraction of H2O: ethanol (3:7) by standard Association of analytical chemists(AOAC)  methods.

Animal:Male Wistar rats weighing between 180-200 g were used for experimental studies.  The Institutional Animal Ethics Committee of the Sree Vidyanikethan College of Pharmacy, Tirupati, Chittoor Dist., A.P., India (Approval No.: SVCP/IAEC/I-001/2018-19 dated 01/04/2019) approved all animal experiment protocols in compliance with the guidelines of the Committee for the Purpose of Control and Supervision of Animal Experiments (CPCSEA).

Acute Toxicity Studies:  The toxicity effect of extract was  recorded in previous studies(Oyeleke, et al., 2018) and found as safety of up to 200 mg/kg. Based on earlier studies, which recorded a better response, the desired doses of 20 and 40 mg/kg were selected (Hosseini, 2018).

Freund’s Complete Adjuvant (FCA): All rats were injected intradermally with 0.1 mL of FCA (1mg/ml) into the left hind paw on day ‘0’, with the exception of those in the normal control group. For arthritis to grow, an interval of 7 days was given. During this time, all the animals developed signs of arthritis, such as swelling, redness and restricted movement. The treatment finished on the 28th day (Alamgeer et al., 2015).Morphological studies including Paw volume and diameter, body weight, haematological studies, histopathologicaland the experimental animal blood was obtained and the serum was isolated by the process of centrifugation .

ELISA kits were used to test the protein concentration of serum proinflammatory cytokines such as TNF-alpha and IL-6, and the procedure was performed in accordance with standard instructions.The values were expressed as Mean ± SEM (n = 3).

Body weight studies: Effect of TFAR on body wt. in FCA-induced arthritic rats was tabulated in (Table 2) indicates the increased body wt. during treatment of standard drug and TFAR. 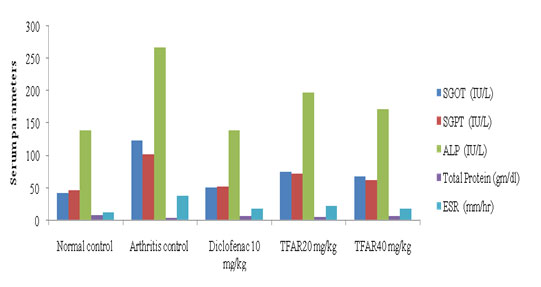 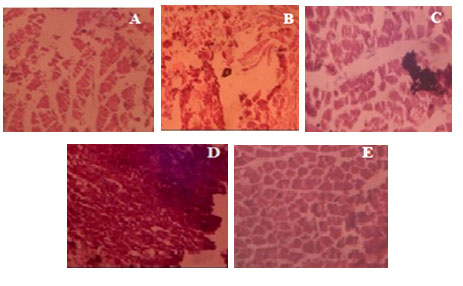 Organs weight studies: A decrease was observed in thymus wt. in comparison with the control group, the mean spleen wt was increased in the FCA treated rats (Table 3). In rats treated with TFAR (20 and 40 mg/kg) and diclofenac (10 mg/kg) compared to FCA treated rats, the increase in spleen wt (P <0.01) was significantly inhibited. TFAR (40 mg/kg) and diclofenac (10mg/kg)  therapy attenuated the decrease in wt. Significantly, of thymus
(P <0.01).

Table 3. Effect of TFAR on thymus and spleen with FCA-induced arthritic rats.

TNF-alpha and IL6 play a key role in inflammatory responses due to generation and propagation of inflammation. Various studies have been performed the effect of extract on inhibition of proinflamatory cytokines and reported dose-dependently reduced IL-6 in macrophages at both the gene and protein expression levels. It was also found that flavonoids inhibited the production of cytokines, TNF-α, macrophage inflammatory protein-1, and IL-6 via the activated monocytes (Farzaei et al. 2019).

The antiathritics activity of A.roxburghianus extract (TFAR) was performed by FCA induced athritis in rat model and it can be concluded from the findings that the total flavonoid fraction showed promising anti-arthritis activity by reducing the amount of proinflammatory cytokines and preserving the weight of the spleen and thymus. The TFAR treated rats showed oedema and necrosis with few inflammatory cells and granuloma formation were observed by histopathological study. Thus, A.roxburghianus plant could be a promising candidate for treatment of various antiinflammatory diseases.

The authors are thankful to Dr. Anna Balaji, Principal of Sree Vidyanikethan College of Pharmacy, Tirupati for providing necessary infrastructure and facilities to conduct this research work.

Conflicts of Interests:The Authors declare that there is no conflict of interest.

Hosseini, A., Shorofi, S.A. and Davoodi, A. (2018). Starting dose calculation for medicinal plants in animal studies; recommendation of a simple and reliable method. Res J  Pharmacogn, 5(2), 1-7.