Peculiarities of the Population Dynamics of Brown-Tail Moth Euproctis chrysorrhoea, in the Plantations of  Penza Region of Russia

Overall, the study of the population dynamics of brown-tail moth (Euproctis chrysorrhoea L.) in the Penza region van help identify the main factors which affect the change in the number of the pest. This scientific approach is necessary for the development of effective methods for the protection of forest plantations. Hence, the chief purpose of this study is to investigate the peculiarities of the population dynamics of brown-tail moth in the plantations of the Penza region. In order to meet the purpose of the study, the examination of the population dynamics of brown-tail moth was carried out in 2018-2020 on permanent stationary test plots laid in various forest inventory and forest growing conditions in Penza region. The solution to this issue was on the basis of quantitative counts with a simultaneous assessment of the identified mortality factors at different age intervals. Arrangement and sampling of trial units was random and systematic according to the existing statistical methodology.

Furthermore, the authors applied generally accepted and specially developed techniques. As a result of the study, examining the population dynamics of brown-tail moth in the plantations of the Penza region led to recognizing 19 different factors of the biotic environment. The regulating role of each of them was established at a specific stage of development of brown-tail moth during ontogenesis. In conclusion, it can be inferred that these results and findings of the study van grant a considerable chance to consider and perform forest protection measures against phytophagous organisms. Some feasible and practical measures are recommended at the end of the article that can be applied in future researches.

The region has all the conditions for the development of brown-tail moth, and in the event of its massive foci, it can cause significant damage to trees and shrubs. Based on the literary sources, brown-tail moth is a poorly studied species throughout the growing area of deciduous plantations (Dubrovin, 2011; Dubrovin, 2016; Sajjadi and Moosavi, 2019; Ramachandran and Rosen, 2020). In the Penza region, this species has practically not been studied (Tachi et al., 2021).

Given the necessity of this matter, the objective of this work is to study the factors of the population dynamics of brown-tail moth population that affect change in the insect population per generation to use the data obtained in the development of effective methods for protecting forest plantations.

As mentioned earlier, to carry out this survey, the study of the population dynamics of brown-tail moth was conducted over the years 2018-2020 on permanent stationary test plots laid in various forest inventory and forest growing conditions in Penza region.  Field survey data were supplemented by laboratory raising of insects. At the same time, a fixed number of the studied phase of ontogenesis was taken, and the percentage of transition of pests to the next phase of development was determined during the observation periods.

The number of caterpillars in the nest was determined using the first developed method, by measuring the circumference of the nest in its widest part and calculating its volume. Further, the actual number of the caterpillars was calculated. The result obtained was converted into a certain unit of the nest volume (Dubrovin & Mladentsev, 2019; Ali et al., 2020). The mortality of caterpillars in wintering nests from various factors, including damage from birds by characteristic pecks, was also determined in laboratory settings. Pupal mortality in natural conditions was registered once a week according to external signs. When a butterfly flew out of the pupa, it formed a large triangular opening on the shell along the borders of the antenna inmantle and chest segments (Dubrovin, 2016; Tachi et al., 2021).

After the emergence of ichneumons, large or small (depending on the type of parasite) rounded holes remained on the shell of the host pupae. The pupae, eaten by tahinas, had irregular holes. The pupae, eaten by the beauties larvae and other predators, had large irregular holes in their different parts. At the end of the survey, the total mortality from parasites, diseases and unidentified causes was determined. The mortality of insects from unspecified causes was determined by the difference in the total number of dead individuals and individuals that died from established causes.

Mortality from interspecies competition was determined in the natural population of pests by keeping caterpillars in isolated sleeves located on the branches of model trees. Feeding caterpillars of the investigated and accompanying insect species, as well as the investigated species alone, were studied in the sleeves. The dead caterpillars without signs of infection and disease, and the difference in mortality were counted to record the total mortality from interspecies competition (Dubrovin, 2016; Ramachandran and Rosen, 2020).

Analysis of the dynamics of the number converted the results of the counts to a unified accounting unit equal to 100 growth points. Material processing and compilation of survival tables were carried out according to the methods (Ali et al., 2020; Ramachandran and Rosen, 2020). Analysis of survival tables determined statistical relationships between population density and survival at different age intervals. The factors of the highest mortality per generation were identified. Mortality from one group of factors over an elementary

where nd – the number of dead individuals,

The survival rate from one group of factors was calculated by formula:

The survival rate from one group of factors for the entire observation period was:

Mortality over the entire observation period:

Survival tables assumed that all factors acting on the populations of the studied insects acted independently of each other.

To identify parasites, predators, and diseases of insects during the research the authors used “A review of braconid ichneumons (Hymenoptera, Braconidae) of the fauna of the USSR”, Iliinskii A.I. Supervision, accounting, and forecast of mass reproduction of needle- and leaf-eating insects in the forests of the USSR / A.I. Iliiinskii, I.V. Tropin. – M.: Forest industry, 1965. – 525 p. (Iliiinskii, 1965), as well as with the help of the staff of the Department of Plant Protection and Horticulture, N.I. Vavilov Saratov State Agrarian University.

The research identified the factors of the natural environment influencing the size of the brown-tail moth population. Among them there are 19 species of entomophages and diseases that affect the decline in the number of brown-tail moth at all stages of development (Table 1).

Table 2. The survival rate of brown-tail moth over the age intervals

In 2018-2020, there was a high number of pests in the studied plantations, the percentage of damage in some cases reached more than 80%. Currently, there has been a decline in the insect population (Dubrovin & Mladentsev, 2019; Ramachandran and Rosen, 2020; Wu et al., 2020). One of the main factors was the biotic factors of the environment, described in the article. Analysis of Table 2 shows the changes the brown-tail moth population undergoes in a generation. From the egg to adult phase, the population size decreases by about 76 times, but due to the high fertility of females the population is restored.

Figure 1: Changes in the abundance of brown-tail moth by development phases in a generation 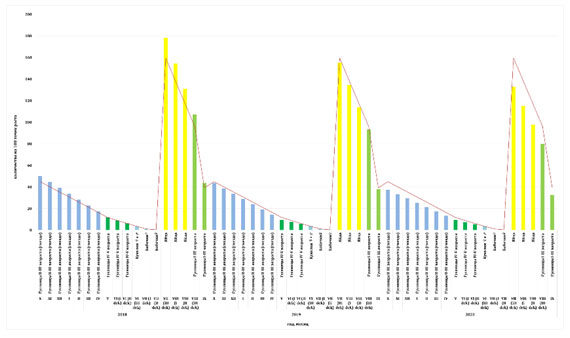 The greatest loss of abundance occurs during the overwintering period of caterpillars and the transition to active feeding, approximately 9 times. In this period of time, there is high mortality from inter- and intraspecific competition. The sex ratio decreased over the years of the study and averaged 0.49, which indicates a gradual transition of the gradation cycle to the phase of population decline. The presented analysis of the survival rate of brown-tail moth over the age interval made it possible to construct a curve of the number of the pest by years of study (Fig. 1). Based on the factors of population dynamics identified in the course of the study, a table of the survival rate of the regulation of the brown-tail moth population over the time interval was compiled (Table 3).

Table 3. The survival rate of brown-tail moth in the plantations of the Penza region

Speaking about the total mortality of brown-tail moth in the caterpillar phase, it should be noted that the younger caterpillars died much more often than the older ones. Statistical analysis of the influence of factors of the biotic environment on young caterpillars revealed an inverse relationship between their abundance and survival in this age interval (Fig. 2). In particular, (Iliiinskii, 1965; Ali et al., 2020; Tachi et al., 2021), considering the influence of the parasites of brown-tail moth, the authors established an inverse relationship of the effectiveness of their action on the survival of the pest.

This pattern was found during the parasitization of Eupteromalus nidulans and Apanteles lacteicolor Toer, tachin Zenillia libathrix Rapz, Blondelia nigripes Fall. The data of the listed authors are consistent with our studies. However, as further studies show, the percentage of infection of the caterpillars of brown-tail moth from the listed parasites was maximum during the crisis phase and in the first year of the depression. The research results made it possible to make a similar analysis of the influence of the factors of the dynamics of the brown-tail moth population using diagrams (Fig. 3-6).

Figure 2: Relationship in the number of I-III-age caterpillars per 100 growth points and their survival 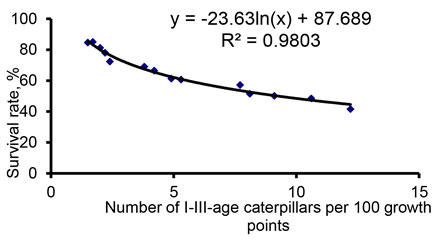 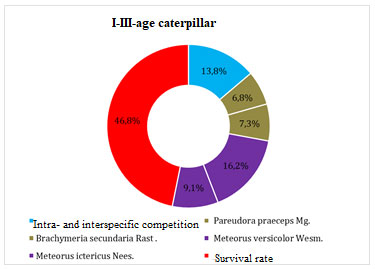 We found that during active feeding, mortality from intraspecific competition of young caterpillars that left the winter nest was 13.8%. The influence on the survival rate of caterpillars from parasites of the tachin family Pareudora praeceps Mg. – 6.8%, Brachymeria secundaria Rast – 7.3%, as well as the braconid family Meteorus versicolor Wesm. – 16.2%, Meteorus ictericus Nees. – 9.1 %, The role of birds in the decrease in the number of caterpillars in the nest was 21%. Mortality was also recorded from intraspecific and interspecific competition – 13.8% and diseases of Entomophthora aulicae Reich. Thus, the total mortality from the listed number of factors at this stage of the pest development was 88.0%. 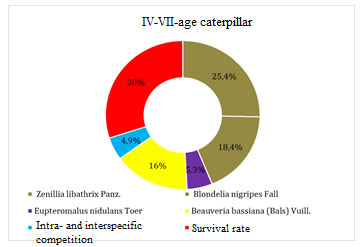 The total mortality of the pest for the given interval of development was 51.6%. A decrease in the number of caterpillars of older ages was caused by parasites of the tachin family Zenillia libathrix Papz. – 25.4%, Blondelia nigripes Fall – 18.4%, and the braconid family Eupteromalus nidulans Toer – 5.3%. Diseases of Beauveria bassiana (Bals) Vuill played an important role in the number of caterpillars – 16.0%. Their death from intra- and interspecific competition was 4.9%. 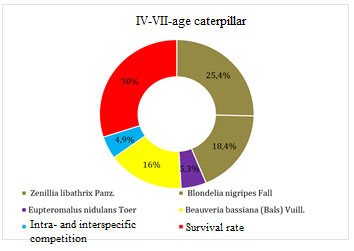 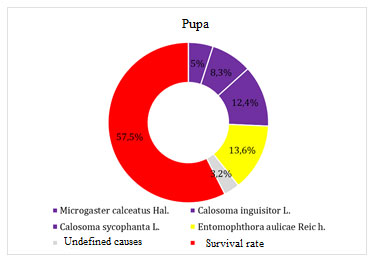 Microgaster calceatus Hal was bred from brown-tail moth pupae with a mortality rate of 5.0%. Predators of pupae Calosoma inguisitor L. and Calosoma sycophanta L. caused death in this phase – 25.7% of pupae. The death of pupae from diseases of Entomophthoraceae, Entomophthora aulicae Reic h. was about 13.6%, of unknown causes – 3.2%. The survival rate of brown-tail moth pupae was 57.5% 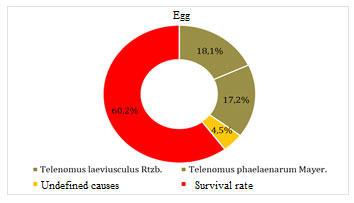 Study of the population dynamics of brown-tail moth in the plantations of the Penza region identified 19 different factors of the biotic environment. The regulating role of each of them was established at a specific stage of development of brown-tail moth during ontogenesis. The data obtained will serve as the basis for further study of this pest in the plantations of the Penza region. They will provide an opportunity to plan and effectively carry out forest protection measures against phytophagous organisms.

Conflict of Interests: the authors state that there is no conflict of interest in this study.

Sheikhshoaie I, Sheikhshoaei M and Ramezanpour S (2018). Synthesis and Characterization of Nano Sized ZnO and CdO by Direct Thermal Decomposition of Their Nano Sized Metal Schiff base Complexes. Chemical Methodologies, Vol 2 No 2 pp 103-113.