Oxidative Degradation of Biodiesel: – Modelling of Different Paths and Effect of Antioxidants on two Mechanisms

Since past many years, biodiesel has been considered as a locally delivered, clean-consuming, inexhaustible substitute for oil diesel. Utilizing biodiesel as a vehicle fuel expands energy security since it contains large amount of methyl esters in the form of especially poly-unsaturated methyl esters. Due to presence of low oxidative stability, they can get easily oxidised and their long storage results into degradation. In order to control this oxidation process, antioxidants are used. Various studies have been performed concentrating upon the oxidative stability but very few focussed upon the mechanisms involved in oxidative degradation and the effect of antioxidants on reactions. The present study models the two different pathways of oxidative degradation of biodiesel for 5 years using the MATLAB 2020 and study of consumption of antioxidants to control the reaction mechanism has taken place. Comparison has been done between the oxidation of biodiesel in the absence and presence of antioxidant via the explanation of two different mechanisms. Change in concentration and consumption of RH (biodiesel organic matter) and antioxidant has been studied during the two different paths of oxidation. It has been concluded that antioxidant has affected the path one process more as compared to the path two process during the degradation mechanism of biodiesel in 5 years. Whereas consumption of antioxidant in path one is only approximate 3% as compared to 99% in path two. Therefore, oxidative degradation carried from path one can be controlled with lower amount of antioxidant whereas no such effect of antioxidant takes place during reactions of path two even after its complete consumption.

Malhotra I, Srivastava M.  Oxidative Degradation of Biodiesel: - Modelling of Different Paths and Effect of Antioxidants on two Mechanisms. Biosc.Biotech.Res.Comm. 2020;13(4).

Since, many years, research has been performed for variety of energy resources which is nearly as old as the man’s need of energy.  Energy has now become the most important part to be considered for global economic growth. To meet the energy requirements, the use of fossil fuels is highly discouraged due to its contribution in greenhouse emission gas to environment, increasing instability in supply and rising production cost (Bannister et al., 2011). Similarly, now-a-days, petroleum reserves are diminishing at a high rate and petroleum fuelled engines are affecting the environment in negative manner, due to which, importance of alternative fuels is increasing. Therefore, urgent need has raised to replace fossil fuels to fulfil the demand of the world. Biofuels said to have more focal points over petroleum derivatives and other sustainable wellspring of energy since it lessens reliance on unfamiliar oil, it is delivered locally subsequently making work and elevating the economy, and has zero or unimportant outflows (Muhammad et al., 2018; Kåberger, 2018)

Hereby, biodiesel has become as an attractive and essential energy resource. Biodiesel contains large percentage of unsaturated methyl esters, which are especially in the form of poly-unsaturated methyl esters. They have comparatively lower oxidation stability than petroleum diesel. When the biodiesel is stored over time, their oxidative stability becomes a matter of concern. The storage problems that are merely caused by storage conditions are exposure to air, light, temperature as well as presence of metals with catalytic effect on oxidation (Sharma et-al, 2009; Karavalakis et al., 2010). To check the biodiesel quality control, oxidation stability is used as a parameter. The oxidation degradation process of biodiesel depends upon the factors such as fatty acids used in production, humidity, temperature and light. The biodiesel deterioration during operation has become the concern for many industries in recent years (Maia et al., 2011; Delgado et al., 2019).

Products formed during oxidation, not only affects the life in storage but also cause fuel filters clogging. To improve the oxidation stability, antioxidants are used by removing the free radical formed at initiation stage. The use of antioxidants helps in delaying of onset of oxidation with free radicals to form stable compounds which do not contribute to oxidation chain reactions. Natural antioxidants like tocopherols, sterols etc are found in vegetable oils, which are strongly affected by production and refining of biodiesel and parent oils respectively. Antioxidants stabilized the fatty peroxy radicals and hereby, the chain reaction gets stopped. Antioxidant do not inhibit but retards the polymerisation. Indicators like formation of colour, presence of soluble gums and insoluble in the fuel helps in stability. (Razon et al., 2016; García et al., 2017; Valenga et al., 2019).

The oxidation mechanism of different hydrocarbons has been a subject to various research papers. Any mechanism while processing mainly involves chemical free radical process.  Any hydrocarbon contains sites which respond with oxygen by means of the autoxidation component with the old-style revolutionary chain response steps of initiation chain propagation and termination. The initiation step is the development of a free radical that can respond straightforwardly with oxygen to structure a peroxide or hydroperoxide. General mechanism on the basis of which oxidation of unsaturated fatty acid takes place is initiation step. Initially, formation of peroxides takes place, which get additionally corrupted utilizing pathways and the auxiliary items framed utilizing them like acids, aldehydes and polymers. (Saeed et al., 2012).  In the Initiation Period, initiators, for example, heat, light, high energy radiation, metal particle impetuses eliminate a hydrogen ion from the unsaturated fat structure and produce free radicals as appeared in R1. RH speaks to a natural substrate being oxidized (FAME), R* is a carbon-focused alkyl radical got from RH, and HOO* is hydro-peroxyl radical. The carbon-focused radical (R*) shaped in the commencement response are exceptionally receptive, and joins with accessible oxygen, giving peroxy radicals (ROO*) in R2 depicted under Propagation Reaction (Herbinet et al., 2008; Riazi et al., 2017; Riazi et al., 2019; Srinivasan et al., 2019).

The peroxy free radical isn’t as receptive as the carbon free radical, yet regardless are adequately responsive and rapidly eliminates another hydrogen by assaulting the frail piece of the FAME structure to shape a hydroperoxide in R3 for example (ROOH*) radical and a R*. The new R* from the above condition would then be able to respond with diatomic oxygen to make the peroxy radicals in R2, and the chain response proliferates. Response of at least two free radicals’ prompts bring about end part. This is called Termination Reaction. The essential or chain breaking antioxidants agents responds with this peroxy (ROO*) and hydroperoxide (ROOH*) extremists and intrudes on the proliferation response by arrangement of antioxidant radical for example A*. Essential antioxidants don’t restrain the initiation response of the biodiesel degradation (McCormick et al., 2007; Noirbent et al., 2020).

This A* framed, therefore follows two ways, first way prompts the response with antioxidant radical with the diatomic oxygen prompting arrangement of AO2*. This AO2* responds and structure various items. It has been expected by various writings that two pathways would happen alongside rudimentary thought of response. Second way prompts the response between the antioxidant radical with peroxide radical prompting development of ROOA. The estimation of rate consistent has been accepted hypothetically however considering the response component of oxidation of RH (Maia et al., 2011; Focke et al., 2011; Varatharajan et al., 2017).

In this study, two different above discussed pathways has been related to the impact of antioxidant. Modelling of the listed reactions has been done in order to evaluate the effect of antioxidant in the reaction on the whole process. Using MATLAB 2020, study has been performed in considering the cases in which antioxidant concentration during the reactions has been converted from 0.09 mol/m3 to the final concentration. The concentration of RH (organic substrate) has been taken as 0.03 mol/m3. Hereby, during the modelling, the requirement of rate constants has been raised which have been fulfilled by the previously available studies (Waynick et al., 2005, Zuleta et al., 2012). Table 1 describes the reactions of two pathways along with the assumed kinetic rate constant using different literatures. 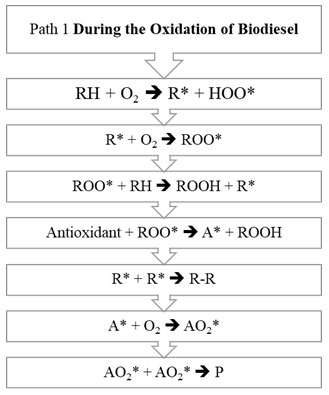 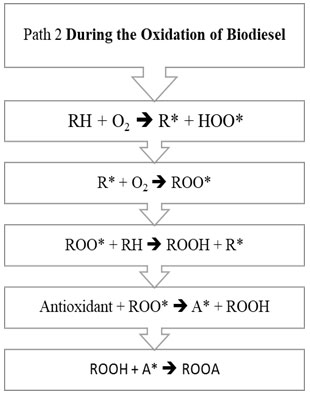 The modelling part has been done using MATLAB 2020, in which the amount of degradation of organic substrate and antioxidant has been studied that takes place for 5 years, if an oxidation mechanism would happen for both the paths. Determination of the exhausted amount of antioxidant would also take place during the two different pathways in the modelling. As explained above, the RH oxidation decreases in presence of antioxidant.  Similar, antioxidant study of safflower biodiesel has also been proved by various literatures which shows the relation of stability of biodiesel with induction period in regards with antioxidants. Other than this, the impact of various antioxidants on refined biodiesel is like the first biodiesel: PY, PG, and TBHQ (tert-butylhydroquinone) gave the best outcome, trailed by BHA (butylated hydroxyanisole), BHT (butylated hydroxytoluene), DTBHQ, IB, and a-tocopherol showed that antioxidants don’t inhibit the mechanism but slow down the process. (Tang et al., 2008; Xin et al., 2008; Karavalakis et al., 2010; Focke et al., 2011; Varatharajan et al., 2017; Devi et-al, 2018).

Figure 3: Degradation of RH in the first path in presence of antioxidant 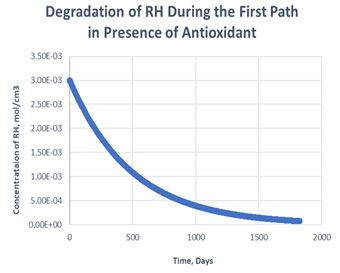 Figure 4: Degradation of RH in the first path in absence of antioxidant. 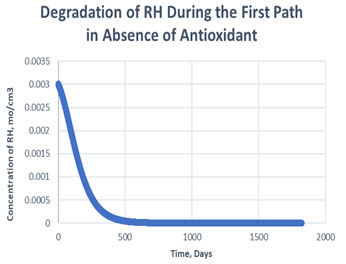 Figure 5: Degradation of RH in the second path in presence of antioxidant 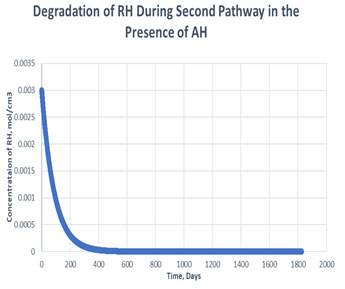 Figure 6: Degradation of RH in the second path in absence of antioxidant 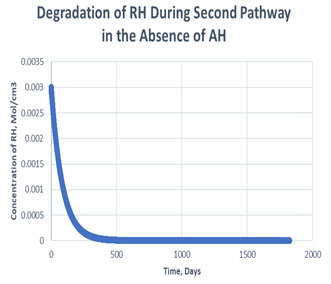 Figure 7: Degradation of antioxidant in the first path 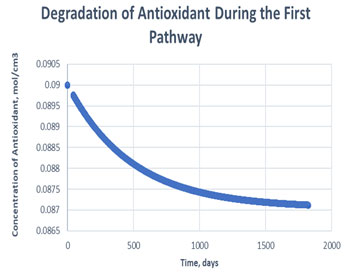 Figure 8: Degradation of antioxidant in the second path. 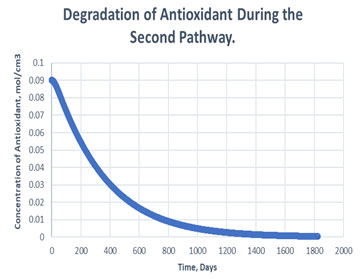 It is clearly observed in table 2 that, antioxidant gets used more in case of second path in order to carry out oxidative stability i.e., it consumed to 99.55% of its initial value. Whereas, only 3.19% of antioxidant gets consumed to carry out the same amount of oxidative stability of RH in case of path one. Hereby, it can be said that if path one is followed, it may decrease the cost of antioxidant to maintain the stability of same amount of RH in exponentially manner (Figure 7, Figure 8). The mechanism followed during the oxidation path of biodiesel becomes dependent of various factors. Since, addition of antioxidants causes storage stability and about association between the physical and compound attributes of biodiesel with natural variables, for example, light, metal pollution, shading changes, and dregs development. The difference between the consumption of antioxidant in different paths arises, due to formation of products like aldehyde, ketones etc, if secondary mechanism is followed (Kivevele et al., 2011; Rashed et al., 2015).

Degradation of aromatic compounds is the common phenomenon observed in industries. Such degradation also takes place for hydrocarbon compounds like biodiesel. The objective of the paper is to study about the consumption of antioxidant at different paths of biodiesel oxidation along with the degradation of biodiesel (RH) during the two paths. Both the studies have taken place keeping the duration of 5 years. It has been concluded that antioxidant has affected the path one process more as compared to the path two process during the degradation mechanism of biodiesel in 5 years. Whereas consumption of antioxidant in path 1 is only approximate 3% as compared to 99% in path two. Therefore, oxidative degradation carried from path one can be controlled with lower amount of antioxidant whereas no such effect of antioxidant takes place during reactions of path two even after its complete consumption. This data, can become useful for the industries which stores any organic substrate (like biodiesel), since the storage of such compounds can become harmful specially when chance of degradation like oxidation, corrosion etc are common for few compounds. To obtain concentration vs. time plot for biodiesel and antioxidants, the concentrations may be measured by techniques like Spectrophotometry or HPLC. Such type of mathematical models together with enthalpy balance, can be developed to predict the potential hazardous oxidation leaks in storage tanks. Such studies would help in developing safer practices.

Devi A., Das V.K. and Deka D. (2018). Evaluation of the effectiveness of potato peel extract as a natural antioxidant on biodiesel oxidation stability. Industrial Crops and Products. 123. 454-460,

Zuleta E.C., Baena L., Riosa L.A. and Jorge A.C. (2012). The Oxidative Stability of Biodiesel and its Impact on the Deterioration of Metallic and Polymeric Materials: a Review. Journal of Brazilian Chemical Society, 23(12), 2159-2175.