Optimization of Cytogenetic Protocol for Chromosome
Preparation in Freshwater Crabs

Freshwater crabs are the most fascinating groups among the decapod crustaceans having great economical and ecological importance. However, the cytogenetic studies in freshwater crabs are very less on record probably due to the small size and the large number of chromosomes that pose a major hurdle in their chromosomal preparations. The research reported herein presents the method to obtain the well-spread chromosomes from freshwater crab species that belong to infra order-Brachyura and order-Decapoda. For optimizing the cytogenetic protocol, different concentrations of colchicine for various time intervals were used. Furthermore, the duration of hypotonic treatment, fixative and the type of tissue used were also investigated. Best results were procured using the testis tissue incubated with 0.1% colchicine for 48 hrs, 0.8% hypotonic solution (potassium chloride) for 50 minutes, and Carnoy’s fixative (thrice after every 10 minutes).

The cell suspension method was markedly better than the traditional dabbing method. The present study was undertaken with an aim to determine the ideal treatment conditions at individual steps involved in slide preparation for getting the best metaphase complement in freshwater crabs. The data obtained in the present study provides a simple and efficient procedure for preparing good quality metaphase spreads that are critical for cytogenetic analyses including chromosome counts, banding procedures, fluorescence in situ hybridization, karyotyping, and construction of ideograms. Chromosomal studies prove to be a great asset as the science of taxonomy and cytology are closely related to each other and cytological studies have been recognized as a vital tool for relative taxonomic classification.

Freshwater crabs are the enormous conglomeration within the Brachyura which is the most species-rich among all the decapod crustaceans. Presently, 125 species of freshwater crabs are found in India that includes 25 genera and 2 families (Pati and Thackeray 2018; Mitra 2019). Despite being ecologically and economically important, little is known about the cytogenetics of freshwater crabs in general and Jammu and Kashmir Union Territory in particular, due to a large number of small-sized chromosomes. Chromosomes play a significant role in the heredity, alterations, divergence, and phylogenetic development of a species.

Analyzing the number, size, and structure of chromosome are significant for the characterization of a species and has great applicability to resolve various taxonomic ambiguities that are encountered due to the phenotypic plasticity of characters in closely related taxa. Furthermore, cytogenetic knowledge has come to occupy an indispensable role while implementing techniques for genome modifying and manipulating. The knowledge about the karyotype of species acts as the baseline for advanced cytogenetic methods and future genome sequencing studies (Abdelrahman et al. 2017, Iannucci et al. 2020).

The general workflow for the preparation of chromosomal stages is as follows: metaphase blocking, preparation of tissue, hypotonic treatment, fixation, slide preparation, and staining.  Firstly, spindle poison is used to arrest the cell spindle fibre at the metaphase stage (Rieder and Palazzo 1992; Silva et al. 2011), followed by incubation of cells in hypotonic solution so that the swelling and bursting of nuclei takes place. After this, the tissue is subjected to fixation which is the most crucial step in the entire process wherein tissue and its components are fixed selectively at a particular stage.

This is followed by preparation of cell suspension, slide preparation, and lastly staining (Moore and Best 2001; Wang et al. 2010; Calado et al. 2013). The aquaculture sector is greatly benefitted from cytogenetic analysis of any culturable species owing to the fact that it offers basic information with respect to a species which in turn is a prerequisite for planning and implementation of breeding programs such as interspecific hybridization, induction of polyploidy, and a better understanding of the phylogeny of the organism (Bartley et al. 2001; Christopher et al. 2010; Iannucci et al. 2020).

Collection of crabs was done from selected sites of the Jammu region, by netting and handpicking with the help of a local fisherman. The live specimens were collected in oxygen-filled polythene bags and brought to the Animal cytogenetics laboratory of the Department of Zoology, University of Jammu where they were placed in a well-aerated aquarium and fed on vegetal remains, chironomid larvae, and artificial feed. They were allowed to acclimatize for 8-10 days at 25ᵒC in the aquarium until the experiment was conducted.

In this study, the initial work was to acquire the amalgamation of colchicine level and time required for procuring good metaphase spreads. Varying colchicine levels i.e., 0.01, 0.05, and 0.1% for varying time period i.e., for 6 hrs, 24hrs, and 48hrs were used at 1µl/g of the bodyweight of the crab. After injecting colchicine, gills, hepatopancreas, and testicular tissue were taken out and the pieces of tissue were placed in a cavity block. To this 5ml of potassium chloride, sodium chloride, and sodium citrate were added for 30min, 50min, 60min (Lee et al. 2004; Okomoda et al. 2018).

After the removal of hypotonic solution, these tissues were fixed using 3-5ml of freshly prepared chilled fixative; ethanol: acetic acid: distilled water in the ratio of 3: 3: 4 and methanol: glacial acetic acid in the ratio 3:1 with an exposure time of 10 minutes and rinsed three times. Some part of fixed tissue was chopped after fixation in a centrifuge tube and the suspension was centrifuged at 1000 rpm for 5 minutes, following which supernatant was decanted leaving behind the pellet of cells containing only about 0.5ml of fixative.

In the dabbing method, prior to centrifugation, fixed tissue was dabbed onto pre-cleaned slides using forceps. The slides were then air-dried. After air drying, the slides were stained with 4% Giemsa phosphate buffer solution in couplin jars for 20, 30, and 40 minutes. This was again followed by rinsing of slides with distilled water to remove the excess stain and then air-drying was done at room temperature. Scanning of prepared slides was done using camera aided Olympus microscope and photomicrography was done using digital Sony SSC-DC3789 (Choudhary et al. 2013; Jasrotia and Langer 2021).

The results procured exhibit that the crabs injected with 0.1% colchicine intramuscularly (third or fourth walking leg), for 48 hrs had superior chromosome spreads as compared to the results obtained by other levels of colchicine concentration and time of exposure. Treatment with 5ml of hypotonic solution (0.8% potassium chloride) for 50 minutes proved to be effective in this study. The optimum method for the chromosome preparation was the cell suspension method. The addition of  Carnoy’s fixative i.e., methanol and glacial acetic acid in 3:1 ratio after the treatment with KCl with three changes of fixative after every 10 minutes gave satisfactory results. The best Giemsa concentration and time for staining were 4% and 30 minutes respectively.

A proper method for the preparation of slides is an essential prerequisite for establishing the cytogenetic status of a species. The cell suspension method emerged to be the best when compared to the dabbing method. One need to be very careful while dropping the cell suspension on slides i.e., it should be made sure that the slide is tilted at an angle of 45ᵒ approximately and the tip of the micropipette should be held at a distance of 25-30cm from the slide so that the proper dispersion of the chromosomes occur on the slide. Moreover, the chromosome preparation should be done at 25ᵒC temperature and 50% humidity because the temperature and humidity greatly influence the process of drying of slides.

Following the inhibition of the mitotic spindle by colchicine, the hypotonic solution is utilized, so that nuclei of the mitotic cells swell up, burst and chromosomes spread out (Moore and Best 2001). There may be overlapping or loss of chromosomes if the appropriate hypotonic solution is not used or the time of exposure to the solution is not appropriate (Baksi and Means, 1988). Treatment with the hypotonic solution is the deciding phase as chromosome count is difficult if metaphases did not spread adequately. Quality metaphase spreads were obtained using potassium chloride (Fig. 1b) over sodium citrate and sodium chloride and these observations draw support from the observations recorded by Swagatika and Kumar (2014) who have also witnessed similar findings while working with mud crab and flower crab as experimental material.

The process of hypotonic swelling gets arrested by the addition of methanol and glacial acetic acid in the ratio of 3:1 and cells get preserved in a stable state. A higher number of well-spread metaphase chromosomes were observed in the testis tissue as the testicular tissue contains both mitotic cells (spermatogonia) and meiotic cells (spermatocytes). There are very few cytogenetic studies in decapods using gills or hepatopancreatic tissues (Iannucci et al. 2020; Jasrotia and Langer2021).

Treatment with Carnoy’s fixative (methanol: glacial acetic acid, 3:1) also proved to be optimal compared to ethanol: acetic acid: distilled water, 3: 3: 4. (Fig. 1d) which is in accordance with findings reported by Gopikrishna and Shekhar (2003). This study suggests that cell suspension dropped on the clean pre-warmed glass slide with micropipette from a height of about 25-30cms and dried at room temperature before staining is the better method for slide preparation as compared to the method in which intact tissues were dabbed on slide directly with the help of forceps and then air-dried. After air-drying, the slides were stained using 4% Giemsa phosphate buffer solution for 30 minutes. A metaphase chromosome complement obtained in the present study is depicted in Fig. 2.

Figure 1: Effect of different procedures on the number of clear metaphase chromosome spreads in freshwater crabs 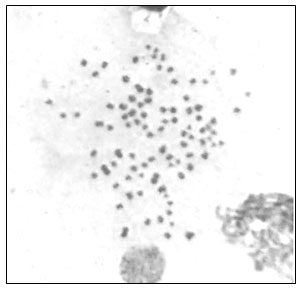 The findings of the present study construct the blueprint of the standard protocol for cytogenetic scrutinization of freshwater crabs. This protocol will be efficacious for further cytogenetic and molecular studies involving freshwater crabs which can be the focus of future research work.

Gopikrishna G. and Shekhar, M.S. (2003). Karyological and PCR-RFLP studies of the mud crabs- Scylla serrata  and Scylla tranquebarica. Journal of the Fisheries Society of Taiwan, 30(4): 315-320.