On the Diversity and Abundance  of Beetles in Lakhimpur, Assam  India

This investigation is a short term assessment which is attempted to explore the diversity of beetles in Lakhimpur, Assam as the region  is extensively familiar for its biodiversity enrichment. Lakhimpur, a district of Assam receives tropical wet evergreen forest and lies in northern bank of river Bramhaputra. The district is adobe to many valuable flora and fauna. Trigerred by our inquisitiveness, we planned an experiment and  collected beetle samples from 4 distinct areas as paddy land, vegetable, garden and forest areas. Beetles were collected twice a day from 6.30-11am during morning and 3-5 pm during evening. Several  approved collection techniques like Light trap, Pitfall trap, hand picking were applied.

Beetles were then brought to the laboratory and stored in 4% formaldehyde in sterilised small glass vials. Identification was done followed by standard identification manuals. Remarkably, 25 species of beetles belonging to 13 different families have been  identified in Lakhimpur as May beetle, Derobrachus geminates, Oriental beetle, Aphodine dung beetle, Heteronychus arator, Gonocephalum simplex, Chrysochus cobaltinus, Compsosternus auratus, Gyrinus substriatus and others.Weather parameters like temperature, relative humidity, rainfall may have influence over beetle abundance in Lakhimpur. Our beyond expectation findings clearly indicated that Lakhimpur,  like other parts of Assam is heavily blessed with different varieties of insects .

Beetles are contemplated as the largest among all insects making up around 30% of all the insect species described so far (Abou-Shaara et al, 2021). They extensively come under the order ‘Coleoptera’ .The word is derived from Greek word ‘keleos’ meaning ‘sheathed wing’(Branco and Cardoso, 2020 ). Around 3,50,000 species of beetles have been identified universally (Gullan and Cranston, 2010). Sighted in all kinds of habitats like soil, dead plants, logs, dung, etc. Beetles have been described to feed on fungi, plants and animal matter. Beetles exhibit many interesting features like they are endopterygotes (undergoing complete metamorphosis) ; traps air bubbles for diving purpose (water beetle) ; chemical defense for protection (Tenebrionidae), parasitism (Platypsyllus castoris) (Das et al, 2016).

From anatomical point of view beetles  resembles to other class of insects excluding the elytra, which is formed by hardening of frontal pair of wings.They reveal many adaptations like camouflage (Chrysomelidae), mimicry (Cerambycidae), aposematism, chemical defense (Tenebrionidae), parasitism (Castor sp.), pollination (Cantharidae), mutualism(ambrosia beetle), tolerence to extreme environment (Stenocara gracilipes), migration (Coccinellids), etc. Although some appear as serious agricultural pests and damage crops where as many beetles are proved helpful like ladybeetle acts as a predator against Colorado potato beetle in crop fields. Ground beetles feed on cutworms, caterpillars, snails, slugs and other soil dwelling insects.rove beetles takes shelter beneath stones or wooden blocks acts as good decomposers.

Lakhimpur , a district of  Upper Assam is an administrative district of Assam. The district is bordered by Arunachal Pradesh, Majuli, Biswanath, Siang, etc.  and by Subansiri river from all around. It covers a total area of 2,277 km2 approx. The district is about 85m above sea level. Lakhimpur is geographically subdivided into 3 regions as- Narayanpur-Bihpuria, Dhakuakhana and North Lakhimpur. Biodiversity in enriched with tropical wet evergreen forest. Some popular forest reserves of Assam like Ranga Reserve, Dulung Reserve, Kakoi Reserve and Bardoibum-Beelmukh Wildlife Sanctuary are located in Lakhimpur and marks the biodiversity enrichment of this part of Assam.

The rural area of Narayanpur is located about 7.2km from Tatibahar station, Lakhimpur, which comes under Bihpuria constituency. Our assessment was conducted specifically in various parts of Narayanpur.

Temperature – 9oC to 24oC during summer 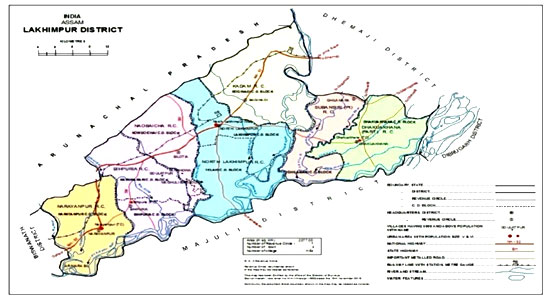 The survey was conducted at 4 different sites as-

Collection and assemblage of beetles were carried out randomly from four different sites. Beetle sampling was initiated with the onset of pre-monsoon season as this season marks the peak time for beetle emergence (Bhattacharyya  et al, 2015; Pathania M, and Chandel RS , 2016) and continued for 3 consecutive months from March to May, 2022 . Beetles were spotted twice on daily basis from 6.30am-11am during morning and 3pm-5pm during evening. Hand picking and insect catchimg nets were preferred. Collected beetles were killed by vapour of killing agents and brought to the laboratory with delicacy and later stored in 4% formaldehyde. Spotting was brought about based on physiological characteristics followed by the protocol of (Neog and Rajkhowa , 2016).

To monitor the abundance of  beetles Light Trap method was also applied followed by the protocol of  Reissing et al, 1986. Materials used for making Light Trap included bamboo/wooden poles, string/rope, kerosine lamp/electric blub and basin full of water/ jute sack. Light trap was installed in the target areas to trap beetles. The poles of the trap were firmly set on the ground and the bulb was mounted on the trap frame which was 5mtrs from the ground. To avoid electrocution , proper care was taken while using electric bulb. Next the jute sack was carefully set under the light chamber.

The device was left overnight for 3 consecitive months and trapped insects were collected during morning hours. Another effective and proved technique known as ‘Pitfall trap’ was also applied to encounter the abundance of beetles in Lakhimpur (Gist &Crossley, 1973).There are two of its kind as ‘dry pitfall trap’ and ‘wet pitfall trap’.We preferred wet pitfall trap where big wholes were made in the ground and filled with 4% formaldehyde so that insects fall over there and can be trapped easily.

Diversity of beetles were analysed using Shannon-Weiner Diversity Index (H). It is a renownened metric system used in ecological analysis. The index value rises with number of species and evenness of abundance. The more is diversity of species in habitat, the higher will be the index.

Figure 2: Relative abundance beetles recorded in Lakhimpur from March to May, 2022. 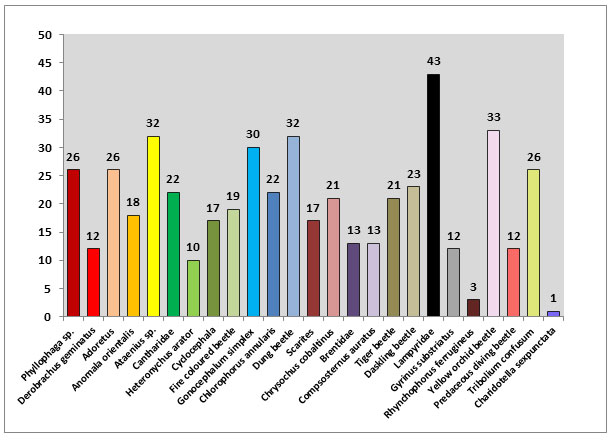 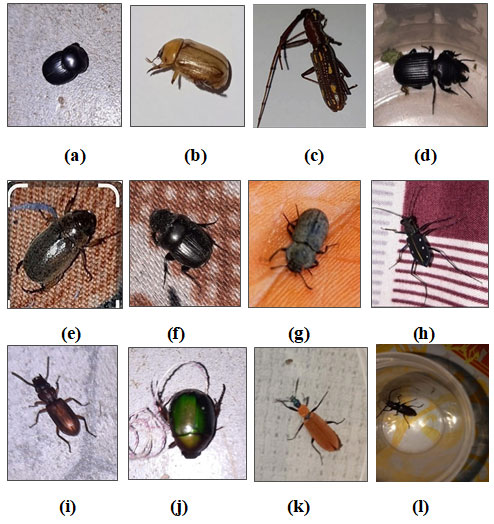 Lampyridae, the light emitting firefly belonging to Suborder Polyphaga and Superfamily Elateroidea administered as most dominant which might be due to its preference of temperate and tropical climatic conditions. Fire flies have been reported to disappear day by day due to excessive use of pesticides, fungisides, human traffic, light pollution and many more (Patole, 2019). Dung beetle has good role in agriculture, improving soil fertility, seed dispersal, protection of livestock, etc. But in our study their dominancy indicated proper management of ecosystem by the people of Assam which is a good remark as fire flies are human friendly (Latha and Sabu, 2018).  Ataenius sp. and Yellow orchid beetles are considered as harmful for damaging crops and flowering plants , hence their huge presence might be seriously noted (Sruthi and Roopavathy, 2021).

simplex also known as Dusty brown beetle, acts as soil dwelling beetle greatly contribute to agroecosystem including predation, decomposition, etc. Though Darkling beetles are good source of food for birds, lizards, rodents, spiders, etc. but they cause immense harm to poultry by transmitting diseases among flocks, decreasing growth and productivity. Cantharidae (Soldier beetle) are abundant visitors of firmland & known as important biocontrols prior to their contribution in agriculture, pollination, etc.

As the name signifies , they feeds on eggs and larva of insects which are injurious to crops. They secrete noxious chemicals in ‘self defence’(Gupta et al., 2020). For multiple reasons tiger beetle are beneficial as they feeds upon pests including ants, caterpillars, spiders, etc. Chrysochus cobaltinus though are harmful to host plants as they consume new leafs and flowers in bulk when attack in groups (Kaud and Sharma, 2017 ). Tribolium confusum attacks stored grains where their dead bodies, fecal pellets causes pungent smell resulting in rejection of grains (Kalawate, 2019).

Predaceous diving beetle, most common among other aquatic beetles, is known as ‘water tiger’, feeds on aquatic insects, tadpoles and sometimes beetles of its own kind (Morgon, 1992). They can be best collected by light trapping method at night where as can be easily collected in freshwater zones in day time. Apart from the rest of beetles captured, Charidotella sexpunctata was the least abundant during our survey. Weather parameters like temperature, rainfall, humidity, moisture might have positively influenced the abundance of beetles and other insect pests in Lakhimpur (Yumamura et al., 2006).

Insects are pecilothermal animals. Researches have proved that weather factors like temperature, relative humidity, rain fall, etc. remarkably influences the abundance, intensity, distribution, feeding behaviour of beetles and most of the insects in any area (Sima and Srivastava, 2012). Temperature interfers in the metabolic activities of insects and leads to increase their larval and pupal growth (Montgomery et al.,2020). Insects grows best in between temperature range of 15-38 o C Rainfall also effects insect dynamics. In researches it has been reported that insects seasonality is related to rainy season as in rainy season there is abundance of food resources which gives high peak to population (Smith et al., 2017). Results of Shannon-Weiner Diversity Index with index value (H=1.2) correlated with beetle abundance in Lakhimpur.

Scarabaeidae family under order coleoptera is the largest and most abundant family of insects. Maintaining resemblance with our previous successful attempt to explore the insect diversity in Silapathar district, this attempt also surprised us. 25 species of beetles were spotted during our  short term initiative with limited resources. The diverse climatic conditions of Assam as well as Lakhimpur have huge contribution in enriching the diversity of beetles as well as other organisms in this very area. We are enthusiastic that long term surveys will explore more about beetles of Assam like their roles in ecosystem, feeding habits, life cycle, adaptations, predations, etc.

Branco, VV and Cardoso, P (2020) . An expert based assessment of global threats and conservation measures for spiders. Global Ecol. Conser., 24,1-26.

Das, M, Bhattacharyya, B,  Pujari, D, Handique, G(2016). Faunal composition of scrab beetles and their hosts in Assam. In: Chakravarthy, A.K.,Shakunthala, S.(Eds) Arthropod diversity and conservation in the tropics and sub-tropics . Springer.Singapore, 335-344.

Kalawate, AS, (2019). Some new distributional records of Scarabaeid beetles from from Maharashtra. Journal of Entomology and Zoology Studies 7(1), 727-729.

Sima, Srivastava, M. (2012). Entomofauna associated with bajra crop as observed in an agro-ecosystem in Rajasthan, India.International Journal of Theoritical and Applied Sciences, 4,109-121.