Series compensation of transmission lines connected to turbo generators can result in Sub Synchronous Resonance (SSR) leading to adverse torsional oscillations. SSR leads to turbine-generator shaft failure and system instability. The use of Flexible AC Transmission System (FACTS) controllers such as Static Synchronous Compensator (STATCOM) are increasing in the network for enhancing power transfer capability, dynamic voltage support and also damping of power oscillations. STATCOM is one of the most versatile flexible ac transmission system (FACTS) controllers which controls the reactive power flows in transmission lines originating from a substation while controlling the sending end bus voltage. This paper reports the analysis and study of novel supplementary sub synchronous damping controller (SSDC) for STATCOM which is capable of damping out sub synchronous Resonance (SSR) oscillations in power system with series compensated transmission lines. Proposed SSDC for STATCOM is designed based on a hybrid fuzzy optimal controller to damp all SSR torsional oscillations. Simulation results which are obtained by MATLAB, verify the effectiveness of proposed technique and its control strategy for enhancing stability.

Series capacitors have extensively been used as a very effective means of increasing the power transfer capability of transmission lines and improving transient and steady state stability limits of power systems (IEEE SSR Working Group 1985). These improvements are done by compensating reactance of the transmission lines. Besides of having remarkable profits for this kind of compensation for transmission line, the risk of SSR could also be brought to the power system which could cause severe damages to the shaft of the generator unit (Xie et al 2012 and Zhu et al 2014).

SSR is a condition of an electrical power system where electrical networks exchange energy with the mechanical system of the generator at frequencies less than the nominal frequency of the transmission line. At this situation, the turbine-generator oscillates at a frequency corresponding to the torsional mode frequency. The torsional oscillations may raise and result in the failure of the turbine shaft (Orman et al 2012).

In this paper, the damping of torsional oscillations using STATCOM has been studied and novel supplementary sub synchronous damping controller based on fuzzy optimal technique is proposed. Optimal control method which is used along fuzzy damping controller will be designed based on linear quadratic regulator (LQR) that minimizes the cost function in order to achieve the optimal tradeoff between the use of control effort, the magnitude and the speed of response. Also it guarantees a stable control system. The Fuzzy logic is used to design of control system in outer loops of controller and designed supplementary controller for damping oscillation in STATCOM. Simulation results which is obtained by MATLAB, verifies the effectiveness of the STATCOM and its control strategy for damping SSR oscillations. 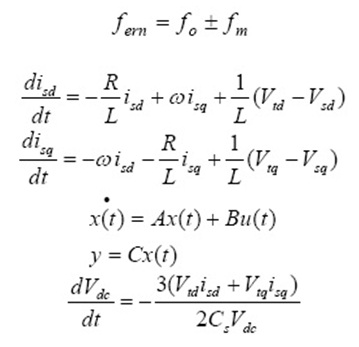 The system considered is an IEEE benchmark used to study subsynchronous resonance. The modeling aspects of the electromechanical system are given in detail in reference. This system is shown in Fig.1.

One convenient method for studying balanced three-phase system (especially in synchronous machine problems) is to convert the three phase voltages and currents into synchronous rotating frame by abc/dq transformation. The benefits of such arrangement are: the control problem is greatly simplified because the system variables become DC values under balanced condition; multiple control variables are decoupled so that the use of classic control method is possible, and even more physical meaning for each control variable can be acquired. Equations (2) to (4) give the mathematical expression of the STATCOM shown in Fig 1.

Optimal Controller Based On Lqr

The theory of optimal control is concerned with operating a dynamic system at minimum cost. The case where the system dynamics are described by a set of linear differential equations and the cost is described by a quadratic function is called the LQ problem. One of the main results in the theory is that the solution is provided by the linear-quadratic regulator (LQR), a feedback controller whose equations are given below.

This method determines the feedback gain matrix that minimizes the cost function in order to achieve the optimal tradeoff between the use of control effort, the magnitude and the speed of response. In addition, this method guarantees a stable control system.

Given a linear system:

Where x (t) are the system’s states, u(t) is the system input and y(t) is the output. The objective is to design a feedback u(t) = –Kx(t) such that the cost function (4) can be minimized:

The weighting matrices Q and R are positive semi-definite. They control how much effort should be put on the controller. The feedback gain K is obtained by getting matrix P first via solving the Riccati equation:

When the feedback gain K is obtained, the LQR controller can be easily designed to make the states approach zeros optimally.

and the output are

Since the LQR controller is designed to drive the states to zero. This is very restrictive and not suitable for solving tracking system problem. In the STATCOM control, line currents are to be followed. Therefore, alteration must be applied to the LQR controller in order to drive the current errors, instead of the currents, to zero. To achieve zero steady state errors, an integrator is inserted in the control loop and the original system is augmented to include the errors as new system states (Xie et al (2012).

Rewrite the cost function in format of (10), it shows that the new LQR regulator is aimed in minimize the errors.

The control block diagram of the LQR current control loop which is proposed for STATCOM is shown in Fig.3.

Controller Design Based On Fuzzy Logic

The major components of a typical fuzzy controller are fuzzification, fuzzy rule base, fuzzy inference, and defuzzification. Fuzzification is the process of decomposing a system input and/or output into one or more fuzzy sets. A fuzzy set is represented by a membership function defined on the universe of discourse. Fuzzy rules represent the control strategy. They are linguistic if-then statements involving fuzzy set, fuzzy logic, and fuzzy inference (Single et al 2013).

Fuzzy rules play a key role in representing expert control knowledge and experience and in linking the input variables of fuzzy controllers to output variable (or variables). Fuzzy inference is used in a fuzzy rule to determine the rule outcome from the given rule input information (Mon et al (2013).

In this article optimal control method based on LQR minimizes the cost function in order to achieve the optimal tradeoff between the use of control effort, the magnitude and the speed of response. Also it guarantees a stable control system. The Fuzzy logic based on PI-D controller is implemented to control system in outer loops of controller and designed supplementary controller for damping oscillation in STATCOM. 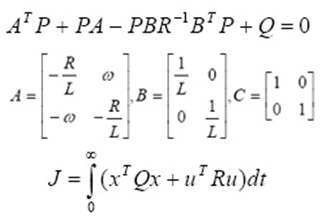 It is well known that damping of power system oscillations can be improved by developing a torque in phase with the speed deviation. Choice of a measurable input signal is the main consideration in the design of a damping controller. So for damping purposes, speed deviation of the generator is used as input to the damping controller and added to the outer dc voltage control loop. This signal brings to a controller who designed based PI-D fuzzy controller based on optimal controller as it shown in Fig.6.

In this paper the case study system is an IEEE benchmark used to study sub synchronous resonance and particularly torque amplification. It consists in a single generator (600 MVA/22kV/60 Hz/3600 rpm) connected to an infinite bus via two transmission lines, one of which is 55% series-compensated. 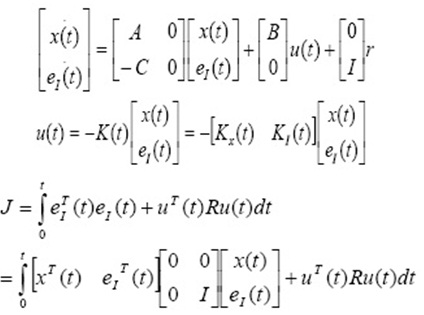 The sub synchronous mode introduced by the compensation capacitor after a three-phase fault has been applied and cleared excites the oscillatory torsional modes of the multi-mass shaft and the torque amplification phenomenon can be observed. The mechanical system is modeled by 3-masses: mass 1 = generator; mass 2 = low pressure turbine (LP); mass 3 = high pressure turbine (HP).

Disturbances are accrued in system according table.1.

Fuzzy rules that are in fuzzy controllers are shown in Table.2.

Figures 13-24 are shown system characterizations after STATCOM installation. Fig. 13 presents the output voltage of STATCOM which is changed on during the faults. Fig.14. shows the rotor speed deviation of different masses in shaft-rotor system. As it is shown, oscillations in speed are damping during the simulation time especially when faults are accrued.

Fig.15. represents torque deviation on different masses. Because of using damping controller in STATCOM, torque oscillations are damping. Based on control strategy in STATCOM, DC voltage of converter must be constant in all time of simulation. Fig.15. demonstrate this fact. Figs.16.17. show the three level output voltage of converter. Also, voltages of buses are shown in Fig.17-Fig.21. all voltage has negligible harmonic because of appropriate filter tuning in output of inverter. Current components are shown in Fig.22-24. Position of this current was shown in Fig.6. This is describing proposed technique in this article.