Parkinson disease (PD) is the most common neurodegenerative and movement disorder, that is characterized by resting tremor, rigidity, postural abnormalities, stooped posture, bradykinesia, akinesia, and festinating gait. These motor deficits have been mainly attributed to the progressive loss of neuromelanin containing dopaminergic neurons in substantia nigra (SN) and lead to the loss of dopamine (DA) in the striatum and manifest as motor disabilities that are characteristics of PD (De Lau and Breteler, 2006). The etiology of PD remains elusive and comprises the involvement of both genetic and environmental factors. Agricultural pesticide use has been well-established causes of parkinsonism (Tanner and Goldman, 1996). One among them is the neurotoxin rotenone; a lipophilic molecule that easily crosses the cellular membranes and blood-brain barrier. Exposure of rotenone mimics numerous pathological features of PD, including dopaminergic neuronal death, mitochondrial dysfunction, oxidative stress, inflammation, and behavioral changes that possess in vitro and in vivo studies (Hoehn and Yahr, 1967; Al-Adawi et al. 2000; Shulman et al. 2001).

Currently available pharmacological interventions provide symptomatic relief for patients with PD and have little efficacy in reversing the underlying neuropathological changes associated with the disease. Therefore, there is a clinical need to identify therapeutic agents that can ameliorate, or slow down the deleterious processes associated with PD. One such paradigm is to explore the possible contribution of natural products that might interfere with PD pathology (Al-Maskari et al.2011). Natural products have been increasingly found to have specific molecular or pharmacological effects that are likely to contribute to the development of neuroprotective agents against PD. Diosmin, (3′, 5, 7-Trihydroxy-4′-methoxy flavone 7-rutinoside) is found naturally in numerous plants, including citrus fruits, especially lemons, green Meyer lemons, and Buddha’s finger fruits Caucasian vetch, Hyssopus officinalis, and Hyssopus.

Also, it is found quite effective in mitigating hyperglycemia in diabetic rats (Pari and Srinivasan, 2010). It is also speculated that diosmin has neuroprotective potential in the treatment of Alzheimer’s disease (Mustafa, et al. 2010; Essa et al. 2012), and against lipopolysaccharide-induced neurotoxicity in PC 12 cells (Halliwell  and Whiteman, 2004). However, the neuroprotective effect of diosmin against experimental PD is not investigated so far. Because of this light, the present study was aimed to evaluate the neuroprotective effect of diosmin against rotenone-induced in vitro model of PD.

Cell Culture: SH-SY5Y cells were obtained from National Center for Cell Science (NCCS), Pune, India. The cells were grown in DMEM supplemented with 10% FBS and 1% antibiotic/antimycotic solution. Cultures were maintained in a humidified incubator at 37℃ in an atmosphere of 5% CO2 and 95% air. The cell culture medium was changed every 2 days.

Cell Viability Assay:  Cell viability assay was determined by MTT assay, as described previously (Johnson et al. 1980). SH-SY5Y cells were collected and seeded in 96-well plates, at a density of 3 ×103 cells/well. To determine the toxicity of rotenone, cells were incubated with different concentrations of rotenone (5, 10, 50,100, and 200 nM) and Diosmin (5 nM, 10 nM, 20 nM, 50 nM,100 nM, 200 nM, 500 nM, 1 M, 10 M, 100 M, 200 M, and 500 M) for 24 h and MTT assay was performed to detect IC50 value of rotenone and Diosmin. To assess the therapeutic efficacy of Diosmin against rotenone toxicity, cells were pre-treated with different concentrations of Diosmin (5,10, 20, 50, 100, and 200nM) for 2h and then incubated with rotenone (effective dose) for 24 h. Diosmin was also present during rotenone treatment for an additional 24 h. Then all the cells were incubated with MTT final concentration (1mg/mL of serum-free DMEM medium) at 37·C for 4h. After the incubation, the medium was removed, and 100 L of DMSO was added to dissolve the formazan crystals. The absorbance of the formazan product was evaluated by a spectrophotometer at 570 nm using a microplate reader. Four independent experiments were performed from each group.

Based on the results obtained from cell viability assay, the effective dose of Diosmin against rotenone toxicity was utilized to study the effect of Diosmin by assessing ROS, MMP, apoptosis, and apoptotic markers protein expression.

Measurement of Intracellular ROS: The levels of endogenous ROS formed in control and experimental cells were estimated by using fluorescence dye (DCFH-DA) (Jayaraj et al. 2013). After pre-treatment with Diosmin (100 nM/mL) for 2 h, the cells (1 ×105 cells/well in 6-well plates) were incubated with rotenone(100nM/mL) for 24 h and then incubated with 100 L DCFHDA for 30 min at 37·C and washed twice with PBS to remove the excess probe; the cells were suspended in glucose enriched PBS and transferred and visualized using a fluorescent microscope. Fluorescent measurements were made with excitation and emission filters set at 485 ±10 nm and 530 ± 12.5 nm, respectively (Shimadzu RF-5301PC spectrofluorimeter), and the images were captured using a fluorescence microscope (Hu et al. 2009).

Measurement of Mitochondrial Transmembrane Potential (MMP): MMP changes were determined by the mitochondrial-specific, incorporation of a cationic fluorescent dye Rh-123 (Bernheimer et al. 1973). After treatment with Diosmin for 2 h and rotenone for 24 has previously been described, the cells (1 ×105 cells/well in 6-well plates) were changed to fresh medium containing 1 L of fluorescent dye Rh-123 (5mmol/L) and kept for 30min at 37·C. The cells were then collected, washed twice with PBS, and estimated by using a blue filter (450–490 nm) (Shimadzu RF-5301 PC spectrofluorimeter).

probes acridine orange and ethidium bromide (AO and EB) and using a fluorescence microscope (Lirdprapamongkol et al. 2005). After the treatment schedule as described in previous experiments, the medium was removed from the plates; cells (1 × 105) were washed with PBS twice and then fixed with 4% paraformaldehyde for 20 min and stained with 100 g/mL AO and EB. These cells were incubated for 20min at room temperature and washed with warm PBS to remove excess dye. Cellular morphology was examined using fluorescence microscopy and photographed and quantified.

Cytotoxicity of Rotenone in SH-SY5Y Cells: A dose-dependent cytotoxic effect of rotenone was evaluated by MTT assay in SH-SY5Y human neuroblastoma cells, which measures mitochondrial function or integrity with a dose of 100 nM which caused ~50% of cell death as compared with controls and was taken as inhibitory dose (Figures 1(a) and1(b)).

Figure 1: Effect of Diosmin on rotenone-induced cytotoxicity in SH-SY5Y neuroblastoma cells were assessed by MTT assay. (a) shows the dose-dependent effect of rotenone (5, 10, 50, 100, and 200 nM) induced cell toxicity after 24 h. An approximately half-maximal inhibition of cell viability was obtained at 100 nM rotenone concentration. (b) shows the dose-dependent effect of Diosmin at various concentrations. Low concentrations (5, 10, 20, 50, 100, and 200 nM) did not induce any toxicity after 24 h treatment, whereas slight toxicity was induced at 500 M concentration. Values are expressed as the percentage of the untreated control and represented as mean ± SD of four independent experiments in each group. 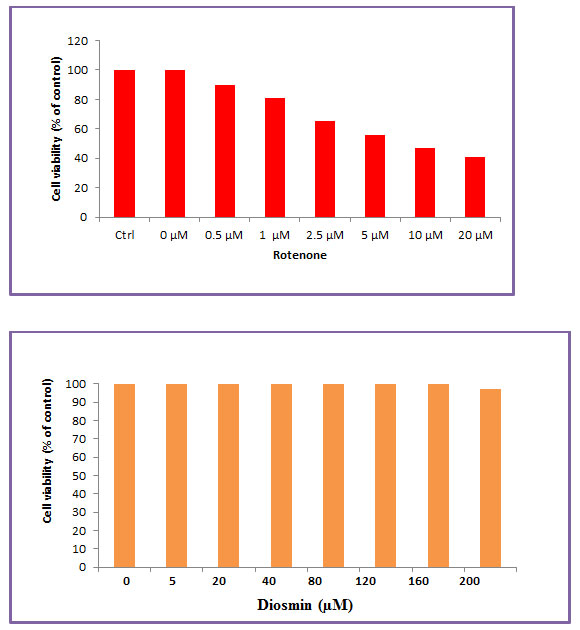 3.2. Diosmin Protects Rotenone Induced SH-SY5Y Cell Death: Figure 2 shows the protective effect of diosmin against rotenone-induced injury (100 nM) with cell viability increasing to 84 ± 6.7% of control in the presence of 100 nM Diosmin. So, based on the dose-response data, the treatments of 100 nM Diosmin and 100 nM rotenone were chosen for further experiments (Figure 2).

Figure 2: The protective effect of Diosmin (5, 10, 20, 50, and 100 nM) against rotenone-induced cell death was determined by the MTT assay. Values are expressed as the percentage of the untreated control and represented as mean ± SD of four independent experiments in each group. 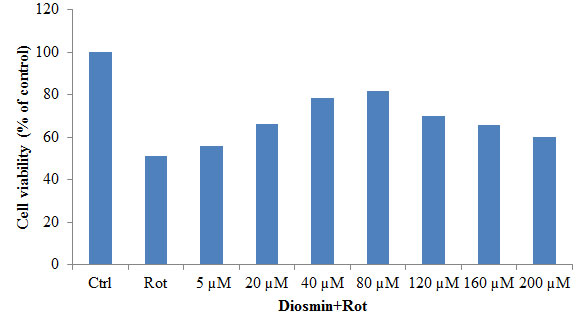 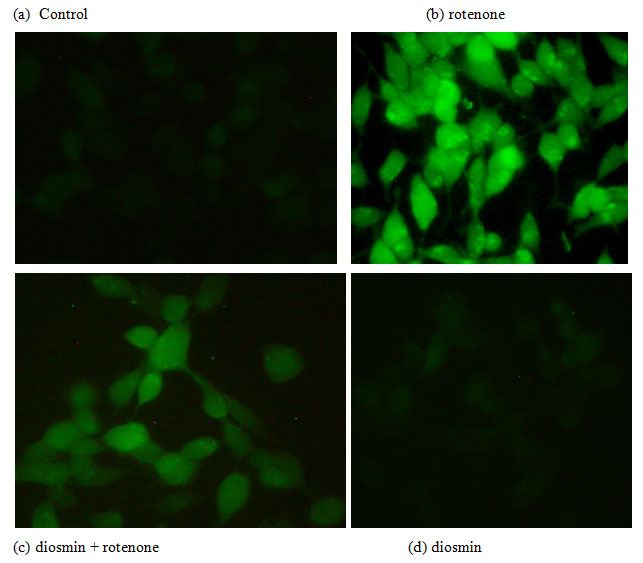 (ΔΨm): Alteration in the MMP is considered to be one of the important events related to apoptosis. The effect of Diosmin on MMP in rotenone-induced toxicity was by measuring the uptake of Rh-123. In normal cells, Rh-123 steadily penetrates the cells, stains mitochondria, and exhibits high fluorescent intensity. The depolarization of MMP due to rotenone treatment results in the loss of Rh-123from the mitochondria and a decrease in intracellular green fluorescence. Cell cultures pre-treated with diosmin before rotenone treatment partially reduced this decline in fluorescence and approached control levels (Figure 4). 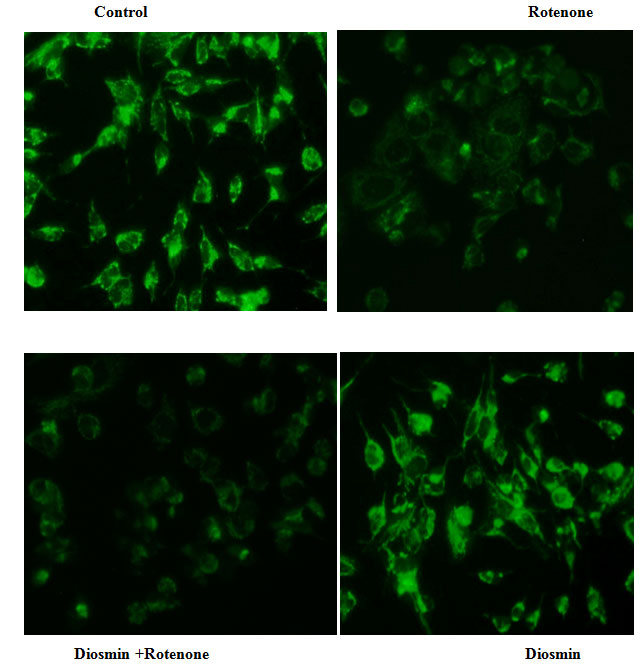 Effect of Diosmin on rotenone-induced apoptotic features in SK-N-SH cells by dual staining:  Apoptotic morphological changes were measured in terms of ﬂuorescence by Acridine orange (AO) and Ethidium bromide (EtBr). Our results indicated that the Control cells which fluoresced brightly with green nuclei and normal morphology were showed in Figure 6(a) and the rotenone (100 nM) treated cells exhibited signiﬁcant nuclear fragmentation and destruction which is characteristic of Apoptosis (bright orange color) and necrosis (red color), respectively. However, the amount of fragmentation and destruction of rotenone treated cells were dramatically reduced when the cells were pre-treated with Diosmin (5 µM) (Fig. 5a &b). 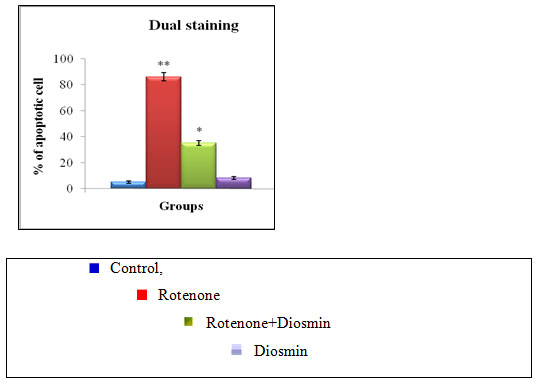 Figure 5 clearly shows the diosmin protects SH-SY5Y cells against rotenone-induced apoptosis. (a) Photomicrograph showing the antiapoptotic effect of (100 nM) against rotenone at a concentration of 100nM effective dose. (A) Control, (B) rotenone, (C) diosmin + rotenone, and (D) diosmin. (b) Rotenone (100 nM) treatment induced cell apoptosis compared to control cells; pre-treatment with diosmin (100 nM) suppresses these apoptotic features. Values are given as mean ± SD of four independent experiments in each group. < 0.05 compared to control and

# < 0.05 compared to rotenone group (DMRT). Results of the present study indicated that the rotenone treatment for 24 h destroyed SH-SY5Y cells in a dose-dependent manner and approximately half-maximal inhibition of cell viability (54.41%) was obtained at 100 nM rotenone concentration, which corroborated our previous studies (Kim H. J et al. 2007). The observed condition mimics the situation at the time of initial diagnosis of PD, when approximately 50% of neurons in the substantia nigra are alive, although many of them may be undergoing subcellular stress (Bender et al. 2006).

In the present study, 24 hours prior exposure of diosmin significantly enhanced cell viability in a dose-dependent manner. In this study, the IC50 of diosmin was found at 100 nM. In the present study, increased levels of ROS observed in the rotenone model indicated that oxidative stress was induced by rotenone and is attenuated by treatment of diosmin which might be because of its free radical scavenging activity. Though diosmin is a potent antioxidant, its alone treatment to SH-SY5Y cells triggers the levels of ROS non significantly.

In conclusion, this study demonstrates that Diosmin, a black tea polyphenol exhibited neuroprotective effects on rotenone-induced apoptosis in SH-SY5Y cells. These antiapoptotic effects of Diosmin appeared to be related to its ability to reduce oxidative stress and maintain the MMP stability in SH-SY5Y cells against rotenone toxicity. Hence, Diosmin may be a potential agent for the treatment of neurodegenerative disorders such as PD, though further research in in vitro and experimental models (in vivo) are needed to prove its neuroprotective effects.

The authors would like to thank our college management for support.

Conflict of Interests: Herewith all the authors declare that they do not have any conflict of interests.

Al-Maskari MY (2011) Basil: A Natural Source of Antioxidants and Neutraceuticals. In: Natural Products and their Active Compounds. Nova Science Publishers, Inc.

Bernheimer H (1973) Brain dopamine and the syndromes of Parkinson and Huntington. Clinical, morphological and neurochemical correlations, Journal of the Neurological Sciences, vol., no. 4, pp. 415–455.

Choi B.-S (2014) Celastrol from ‘Thunder God Vine’ protects SH-SY5Y cells through the preservation of mitochondrial function and inhibition of p38 mapk in a rotenone model of Parkinson’s disease, Neurochemical Research, vol. 39, no. 1, pp. 84–96.

Halliwell B and Whiteman. M (2004) Measuring reactive species and damage in vivo and in cell culture: how should you do it and what do the results mean? British Journal of Pharmacology, vol. 142, no. 2, pp. 231–255.