Hemochromatosis is caused by p.Cys282Tyr mutations in HFE. This study’s objective was to find causal or disease-related variations in people with erythrocytosis of unknown origin who came from a family with clear blood markers and other indicators of congenital erythrocytosis. This research aims to create a new hemochromatosis risk prediction prototype and evaluate psychographic, clinical, and genomic data to improve predictive model performance. In this review, a conditional characterization of primary iron overload, secondary iron overload, and hemochromatosis medical history is established, as well as an analysis of the drug molecules used to treat hemochromatosis. This paper provides Hemochromatosis Gene brand and its operation.

Hemochromatosis is a metabolic disorder in which the body dissolves excessive amounts of iron from food. Increased iron levels in the blood poison the tissues of the liver. Pancreas, heart, pituitary gland, joints, and skin. Hemoglobin is found in millions of copies in red blood cells. Which binds to oxygen and converts into tiny oxygen transporters that allow oxygen to reach all of our body’s tissues (Whitlock et al. 2006). These hemoglobin proteins are made up of four Hemi-molecular, each of which contains iron in the midsection (McLaren et al. 2003). 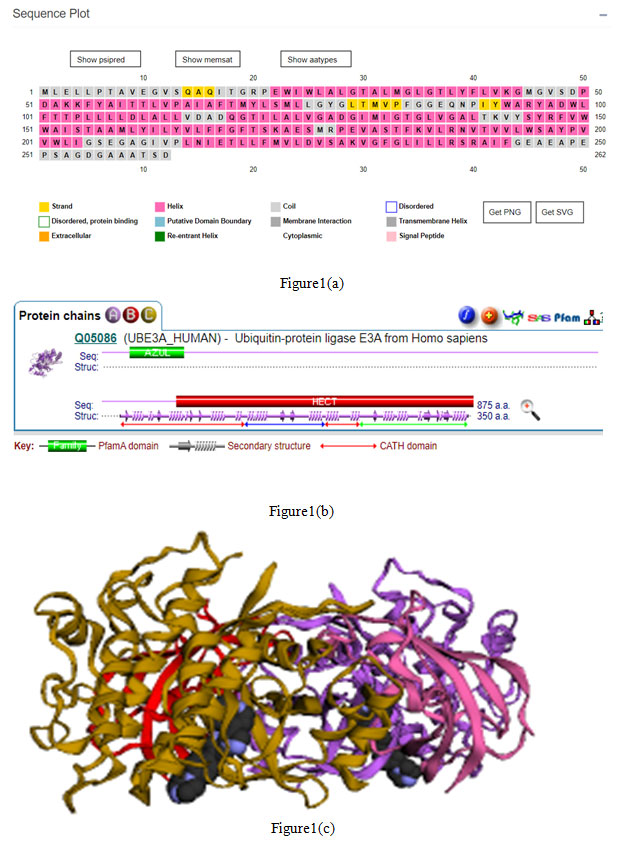 A net gain of 3mg per day equates to about 1g of excess iron in our bodies per year, leading to more than 20mg by age 40. The liver stores the most iron, but it’s also found in the pancreas, heart, joints, skin, and pituitary gland. Unfortunately, all of this extra iron causes significant harm because iron in the body is quite useful at producing free radicals via the Fenton reaction (European Association for the Study of the Liver 2010). This reaction occurs when iron2+ molecules are oxidised by H2O2, resulting in iron3+. Iron3+ can then be decreased back to iron2+ by H2O2, resulting in a peroxide radical, accomplishing an infinite loop of free radicals (Bardou-Jacquet et al. 2015). As a result, all of these iron deposits produce free radicals in the cells of different organs over time, which can result in cell death and tissue fibrosis (Ong et al. 2017).

TYPES OF HEMOCHROMATOSIS: Hemochromatosis is two type primary and secondary. PRIMARY HEMOCHROMATOSIS: Hereditary hemochromatosis is another name for primary hemochromatosis. Mutations in the HFE gene, which is found on chromosome 6, cause it. This is beneficial for controlling the amount of iron we absorb from our food. The C282Y mutation or the H63D mutation is present in people with this autosomal recessive disorder. This mutation affects enterocytes, which are absorptive cells in the small intestine that absorb a variety of substances as well as iron. The iron is absorbed when it is required. They basically control how much iron enters the bloodstream from the intestine. Because these enterocytes are no longer as effective at regulating iron, the majority of the iron in your diet simply passes through the bloodstream, overloading the blood (Olynyk et al. 1999; Milman et al. 2003; Ong et al. 2017).

SECONDARY HEMOCHROMATOSIS: Secondary hemochromatosis occurs when hemochromatosis is caused by something other than a genetic mutation. Frequent blood transfusions are an example of secondary hemochromatosis. When you receive new blood via transfusion, those red blood cells die after about 120 days. Because the iron in blood is used again, each new bag effectively brings a package of iron to your body. Blood products result in a high level of iron in the blood (Widdowson and McCance 1937; Ong et al. 2017).

CHARACTERSTICS OF THE DISEASE:

The physical feature of Hemochromatosis include:

Some people don’t get any symptoms until other problems arise. These may include: 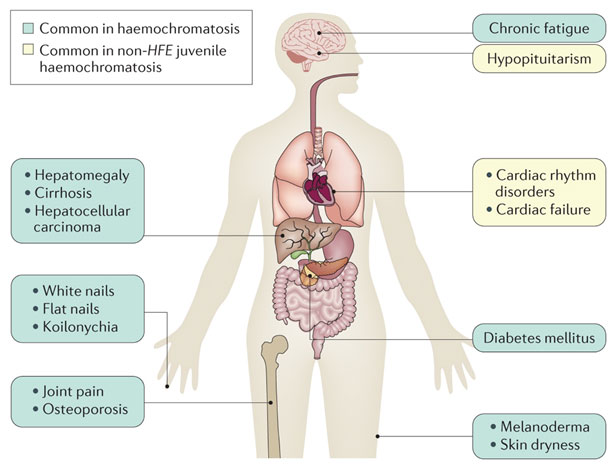 Different complications can arise based on the organs responsible for iron absorption. Because a huge amount of iron is stored in the liver, it’s not surprising that the liver undergoes a lot of fibrosis as a result of free radical damage over time and causes liver cancer.

TREATMENT OF HEMOCHROMATOSIS: It usually involves phlebotomy, which is an age-old treatment for a variety of ailments. The iron load is decreased by eliminating red blood cells till the serum ferritin and percent concentration levels are reduced. Deferoxamine is a stimulant treatment that is used as a medication. Deferoxamine binds to free iron in the blood and allows it to pass through the urine, lowering the iron load once. Table3 analyses the drug molecule used for the treatment of hemochromatosis (Guggenbuhl et al. 2005; Lan et al. 2005; McDermott and Walsh 2005; Kowdley et al. 2020).

Phlebotomy: Phlebotomy is the preferred medication, but in the most severe cases, complementary oral chelation may be used. Phlebotomies are also effective for treating patients with defunct ferroportin disease, but it may be done on a limited basis due to the risk of anaemia in these patients due to poor iron recycling (McLaren et al., 2010). Many doctors and patients believe that high serum ferritin levels indicate iron overload and that phlebotomy is used to treat it. Phlebotomy therapy is used to take out iron from the body and avoid further tissue damage (McLaren et al. 2010). Patients with haemochromatosis should resist oral iron medication and excessive drinking, but there are no nutritional limitations. Raw shellfish should be avoided by patients with hemochromatosis, especially in subtropical areas, because they are more susceptible to Vibrio spp. Infections (Pilling et al. 2019; Kowdley et al. 2020).

Chelation therapy: When phlebotomies are forbidden by treatments due to inconceivable poor vein situation, iron chelator treatment is only used in exceptional and unique cases of HH (Kowdley et al. 2020).

Hepcidin therapies: This strategy is best suited for standard treatment if drugs do not reduce iron in the liver. The therapies will almost certainly be parenteral and costly. For patients with haemochromatosis, the SF-36 (Short Form 36) is the most frequently applied device (Kowdley et al. 2020).

Table 3. (The drug molecule used for treatment of Hemochromatosis)

The findings of the present study have shown that hemochromatosis is a build-up of iron in our body and can be harmful to your liver, heart, endocrine and glands. A liver biopsy may be applied in some cases to verify the presence of iron overload. Hypogonadism, cardiomyopathy, and liver fibrosis are all common clinical features. We present mutations in the HFE gene, and transferrin saturation. We suggest complete non-coding region screening of erythrocytosis-associated genes for all statistically significant variations that may be linked to an enhanced expansion of RBCs, followed by whole-genome sequencing, to further investigate the aetiology of instances of congenital erythrocytosis.

Funding statement: This research received no specific grant from any funding agency