Renal disease is a common issue in everyone’s life. The toxin produced in our body is deposited in the kidneys. Kidneys will maintain the fluid level of the body. Abnormal in the fluid level causes the renal disease. Pathologic proteinuria is the most common cause of membranous nephropathy (MN). The disease is very progressive. Blood pressure encompasses a dramatic effect on the speed at which the disease progresses. Even alight rise in pressure level can quickly make nephropathy worsen. Low salt intake will reduce the blood pressure. Healthcare industry along with the rigorous growth in computer field analyzes the disease and give a boon support to the medical field. Machine Learning Methods is one of the smart manifestation practical significance for medicine. It is often accustomed classify various objects supported a series of coaching data whose result value is known. Classifiers methods  have been used to identify the important attributes and uses different techniques to identify the disease.

Our body has a wide range of cell types. Among the cell types most heterogeneous type of tissues are identified in the kidneys. Each area of the kidney contains a defined segment called the nephrons and portion of the collecting duct system. The filtering portion of the kidney is named as glomeruli and have a more complex structure comprising capillaries epithelium and intraglomerular mesangial cells. Endocrine functions play a vital role in kidney function. Abnormalities as a result of poisonous chemical compounds or other interventions may have profound outcomes on those functions and consequently, on overall capabilities (Padmavathi and Senthilkumar, 2020).

Membranous nephropathy (MN) is a continual sickness and its development embraces impulsive diminutions and recurrent deteriorations (Bomback et al., 2018). Nephrotic patients who do not know how to warmth into attenuation are susceptible to course to cease stage renal morbidity. People who are susceptible to high blood pressure, diabetes are more perspective to chronic kidney disease. As a symptom of membranous nephropathy, it triggers problem in breast for women and  it is addressed that if any one of the diseases is recognized it leads to primary membranous nephropathy in lungs (Silva et al., 2018; Padmavathi and Senthilkumar 2020).

Diagnosing the disease plays an important role. Proteins with a molecular weight of much less than 20,000 skips easily throughout the glomerular capillary wall. Conversely, albumin, with a molecular weight of 65,000 Daltons and a negative charge, is confined under everyday conditions. The smaller proteins are in large part reabsorbed at the proximal tubule, and the best small amounts are excreted. Lack of protein, urine excretion greater than grams per day in 24 hours is an end result of glomerular disease.

PSO is based totally on the principle that every solution may be represented as a particle inside the swarm. every particle has a role inside the search space, which is represented by way of a vector xi = (xi1, x i2,…, xi D), where D is the dimensionality of the search space, debris pass within the seek space to look for the most suitable   solutions therefore, each particle has a velocity, which is represented as vi = (vi1, v i2,…,vi D). At some point of the motion, each particle updates its function and speed in keeping with its very own enjoy and that of its associates.

The quality preceding position of the particle is recorded as the personal satisfactory p high-quality, and the high-quality position obtained via the populace so far is known as g nice primarily based on p pleasant and g fine, PSO searches for the most effective solutions through updating the velocity and the placement of every particle consistent with the subsequent equations. K-Nearest Neighbor, Random forest and boosting methods  have been  taken for the optimization techniques.

The accuracy degree of every classifier has been calculated earlier (Silva et al., 2018; Padmavathi and Senthilkumar 2020). Then the modified particle swarm optimization  has been used to get higher performance. Assessment of PLA2R autoimmunity is crucial for an affected man or woman management. The classifiers are applied to the AntiPLA2R dataset to enhance the overall performance. Normally, feature choice is a multi-goal problem. It has two foremost objectives, which can be to maximize the type overall performance (reduce the classification errors rate) and to reduce the variety of features (Padmavathi and Senthilkumar 2020).

The research work  has been  implemented on MATLAB software tool and utilized  it as a user-friendly interface. For the experimental tests, UCI Repository dataset  was  used in this framework. Monitoring the PLA2R and diagnosing the disease plays a key role in this research work. Kaplanmeier statistical analysis was done and hypothesis method was introduced and proved that p value was significant. Machine learning methods was introduced and the performance of the classifiers was done along with  classifiers bagging and voting, which  was introduced and the performance of the bagging gave  better result for the disease prediction. Weka toolkit 3.8.2 was used to obtain   better results modified using  methods of earlier workers  (Rakhlin, 2006; Padmavathi and Senthilkumar, 2019).

Optimization based feature selection method  has also been  used, where  teaching learning-based optimization method has been  used. Hybrid based learning method was used for one of the supervised learning method support vector machines, (SVM) and its performance was calculated, based on the time period  following the methods of  workers like, (Dhayanand and Vijayarani1, 2015; Padmavathi and Senthilkumar, 2019). Class problems often have a big wide form of functions in the records units, but now not they all are beneficial for class irrelevant and redundant functions may additionally even reduce the overall performance. Characteristic selection targets to choose a small number of relevant skills to gain similar or perhaps higher magnificence normal overall performance than the use of all capabilities (Padmavathi and Senthilkumar, 2019).

It has fundamental conflicting objectives of maximizing the category performance and minimizing the quantity of capabilities. In the proposed method, the modified PSO technique we alternate the fitness feature (distance calculation) for every statistic. Here we alternate the match cost each new release, each new release the threshold cost is increased. Ultimately, we discover the solution of the iteration value based totally on the p best and b best values. Every iteration discovers the solution of facts based totally on generation and locates the first-class answer value in a few particular iterations and then we set the edge cost.

The particle swarm optimization  was found to be  fee effective and its technique  is being  used in many fields. Modified-PSO algorithm becomes  a parameters optimization method, progressing to improve the sitting of the parameter values of system learning algorithms KNN, RF, Boosting, this model was designed to help the physicians reliably in identifying the abnormalities in pancreatic cancer. KNN, Random Forest and Boosting methods  have been  taken for the optimization methods. The source of data was taken from the UCI Repository dataset. The particle swarm optimization was applied to this dataset. A total of twenty-five attribute was taken for the calculation of the accuracy (Padmavathi and Senthilkumar, 2019). 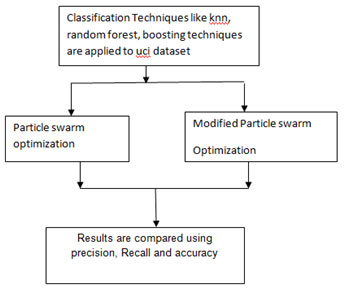 Steps: 1) Find the Objective (target to be achieved), 2) Let as Assume the Fitness value as 1 by Objective 3) Initialize Velocity and number of Iteration a) For each iteration calculate the local best from the population. b) Compare the local best with the previous local best to update the current lbest and velocity 4) Recalculate the Global best.5) Compare with the fitness if reached stops the iteration 6) Else continue to the next step. The accuracy level of each dataset is considered and it is tabulated.

Table 1.Describes the performance of the classification techniques by PSO. Based on the time factor accuracy is calculated for the Anti PLA2R DATASET

Table 2. describes the performance of the classification techniques by PSO algorithm. Based on the time factor accuracy is calculated.

Figure 2: showing  the accuracy of the particle swarm optimization  being determined. 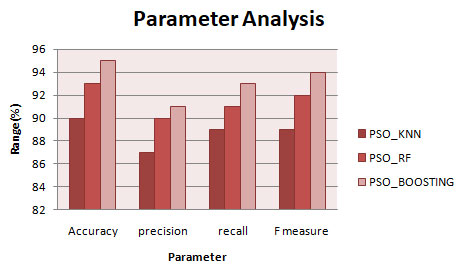 Figure 3: The accuracy of the particle swarm optimization  determined on the basis of time. 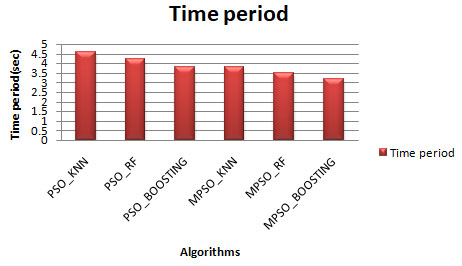 PSO provides a valuable high level data points for the initial selection for further classification. Particles or potential solutions are represented having a position and rate of the change in d-dimensional space. In PSO, a number of solutions are encoded as a swarm of particles in search space. The initial values of a particle are randomly chosen. Each particle maintains a record of its best achieved since the beginning of the iteration. Also, each particle has a defined neighborhood. Particles make decision based on the performance of its neighbor and itself (Padmavathi and Senthilkumar, 2019).

Table 3. describes the performance of the classification techniques by modified particle swarm optimization. Based on the time factor accuracy is calculated. In this modified pso method the distance is measured and its threshold values is calculated.

Table 4: Accuracy level of the optimization based classification techniques

Table 4 describes the performance of the classification techniques by modified pso algorithm. Based on the time factor accuracy  has been  calculated 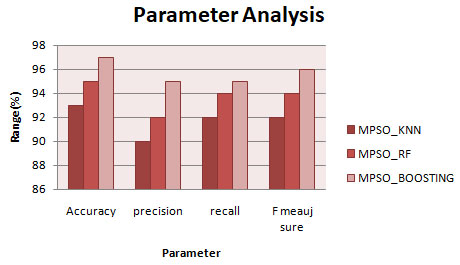 This   present model has been designed to help the physicians reliably in identifying the abnormalities in pancreatic cancer. KNN, Random Forest and Boosting methods were taken for the optimization methods. The source of data is taken from the UCI Repository dataset. The particle swarm optimization was applied to this dataset. A total of twenty-five attribute was taken for the calculation of the accuracy as the method of Padmavathi and Senthilkumar, (2019). The above process discusses about the comparison of previous work with the proposed work Modified particle swarm optimization. The accuracy of the ensemble methods bagging and boosting proves to be higher with the time factor 3.8.

Recently Trujillo et al (2020) have  provided a  new way of understanding membranous nephropathy, similar to our work  where two datasets are used to improve the classification performance. The input parameters for boosting methods were optimized using modified version of PSO algorithm. In both the datasets the boosting algorithm performance is very high compared with the other classification techniques knn and Ada boost techniques

Membranous nephropathy may be a relatively common autoimmune disorder with a heterogeneous prognosis and  its detection persists within the timely treatment of the patients. Different classification techniques have been  used to improve the performance. KNN method was applied to boost up the accuracy. In this proposed method classifiers along with the particle swarm optimization methods were used. Two datasets were used to improve the classification performance. The input parameters for boosting methods were optimized using modified version of PSO algorithm. In both the datasets the boosting algorithm performance was very high  as compared with the other classification techniques, the  knn and Ada boosted techniques. We anticipate that future research will specialize for a far better understanding of autoimmune antibodies and to enhance with the applications of Artificial Neural Network.

Author Contribution: All authors contributed to the content of this manuscript:

Conflicts of Interest: The authors declare that they have no conflict of interest.