The Union Territory of Jammu & Kashmir have rich faunal diversity in its aquatic resources. Shellfishes (such as prawns and crabs) together with finfishes are contributing significantly to meet the nutritional requirements of natives. The local prawns have greater potential to raise the economic standard of Jammu region if cultured extensively on commercial scale. In this regard, they need to be analysed at chromosomal and molecular level. In the present study, the chromosomes of Himalayan prawn (Macrobrachium dayanum) were characterized by means of conventional Giemsa staining, Ag-NOR and G-banding techniques. It is one of the most abundant shellfishes in water bodies of Jammu region having high protein and mineral content. The diploid chromosome number (2n) and fundamental number (NF) were found to be 100 and 176 respectively. The karyotype comprised of 60 metacentric, 16 submetacentric, 12 subtelocentric and 12 telocentric chromosomes. Idiograms were constructed on the basis of morphometric details of the chromosomes. Allosomes (sex chromosomes) remained indistinguishable. NORs were located on two submetacentric pairs of the complement. Results of G-banding provided the heterochromatin and euchromatin patterns of M. dayanum. Several meiotic stages such as leptotene, zygotene, pachytene, diplotene, diakinesis, metaphase I and metaphase II from testes were also observed. Karyological studies aid in exact taxonomic identification and understanding of the phylogeny of an organism. The data obtained in present work would serve the basis of stock improvement, future cross breeding and chromosomal manipulation experiments such as induction of polyploidy etc. Through this analysis we have concluded the results which can support future research by acting as a credible milestone.

Macrobrachium dayanum belongs to family Palaemonidae of decapod crustaceans. It is broadly distributed in Northern India, Southern Nepal and Myanmar (Jayachandran, 2001; Cai and Ng, 2002). It is commonly available prawn in stream ecosystems of Jammu region and its nutritional value stands at par with culturable fish species. The identifying features of the species are: Rostrum straight or slightly upturned at distal half, reaching almost equal to the length of antennal scale or extending a little beyond it. Dorsal or upper surface of the rostrum bears 5-11 teeth of which 1-2 are post orbital and the ventral or lower surface possess 4-7 teeth (Paul, 1991; Sharma, 2015). Sexual dimorphism is quite distinct in M. dayanum. Second pair of walking leg is stout and more robust with sharp pincers in males as compared to females. The second pair of swimmerets bears an additional structure called appendix masculina in males. The size of the specimen ranged from 5.0±0.10 to 6.3±0.38 cm in males and 4.9±0.12 to 5.9±0.36 cm in females. The females carry green coloured eggs in the brood chamber during the breeding season (Langer et al., 2004; Jasrotia et al., 2017; Jasrotia and Langer, 2019).

Despite having greater economic and commercial importance, the cytogenetic reports of family Palaemonidae in general and genus Macrobrachium in particular are very few. The reason for this is attributed to the technical difficulties associated with their highly condensed numerous chromosomes (Chow et al., 1990; Nagashree, 1993; Gonzalez-Tizon et al., 2013; Phimphan et al., 2018). There is no previous record of the karyotype of M. dayanum. The present study was thus undertaken to document the chromosome number, analysis of meiotic stages, development of karyotype and chromosomal banding of this species for the first time. It is pertinent to mention that karyomorphological information contributes to better understanding of systematics and genealogy. Moreover, it would help in analysing the course of evolution in family Palaemonidae (Phimphan et al., 2018).

Live specimens of M. dayanum were collected by using cast net from Gho-manhasan stream and Sai stream of Jammu district and brought to Animal Cytogenetics lab, Department of Zoology, University of Jammu in the plastic containers. The taxonomic identification of specimens is based on the standard keys. Before dissection, the animals were maintained in clean water in glass troughs equipped with aerators and thermoregulators (Jayachandran, 2001; Cai and Ng, 2002; Sharma, 2015). Adult specimens were injected intramuscularly with 0.05 % colchicine solution and were maintained for a period of 5 hours before sacrifice. Apart from this, dip treatment of 0.1 % colchicine solution for 10-12 hours was also applied on some specimens. Gonadal tissues, hepatopancreas and fertilized eggs were used for chromosomal preparations by following air-drying Giemsa staining technique with some modifications (Choudhary et al., 2013; Hassan et al., 2015). After colchicine treatment, the prawns were dissected and the required tissues were placed in hypotonic solution (0.9 % sodium citrate) for 50 minutes (Sharma, 2015).

Fixation of the tissue was done in 3:1 methanol-acetic acid fixative (Carnoy’s fixative) for 60 minutes (with three changes of fixative after every 20 minutes). The material was then minced in 45% acetic acid for 10-15 minutes. The suspension was dropped on the clean and pre-warmed slides and air dried. The conventional method of dabbing the fixed tissue material on clean slides followed by air drying was also used. After air-drying, the slides were stained with 4% Giemsa phosphate buffer solution (pH 6.8) for 30- 35 minutes. Ag-NOR and G-banding were done following standard protocols with certain modifications (Howell and Black, 1980; Sumner et al., 1971). The prepared slides were scanned under Olympus camera aided microscope and metaphase spreads as well as meiotic stages were photographed using Sony SSC-DC378P camera under 1000x magnification. For karyotyping, best metaphase spreads were selected and chromosomes were classified following internationally accepted standard classification (Levan et al., 1964). The chromosomal pairs were arranged in the decreasing order of their size in the karyogram. Morphometric measurements were done by using occulometer (Hassan et al., 2015).

The spermatagonial metaphase (Fig.1a) in male and somatic metaphase complement in female (Fig.1d) comprised of 50 chromosome pairs in each showing basic chromosome number to be 2n=100 in this species. The chromosome type and form were found to be similar in both the sexes and most of the chromosomes were metacentric and sub-metacentric. The diploid chromosome formula was determined as 2n=60m+16sm+12st+12t. Sex chromosomes were not morphologically differentiated from the autosomes in male and female karyotypes (Fig. 1b and 1e respectively). The average lengths of each chromosome including short and long arm length, total length, arm ratio, relative length percentage and centromeric index were calculated for both the sexes and presented in Table 1 and 2. The diagrammatic summary of male and female karyotype was shown by constructing the idiograms (Fig.1c and 1f). 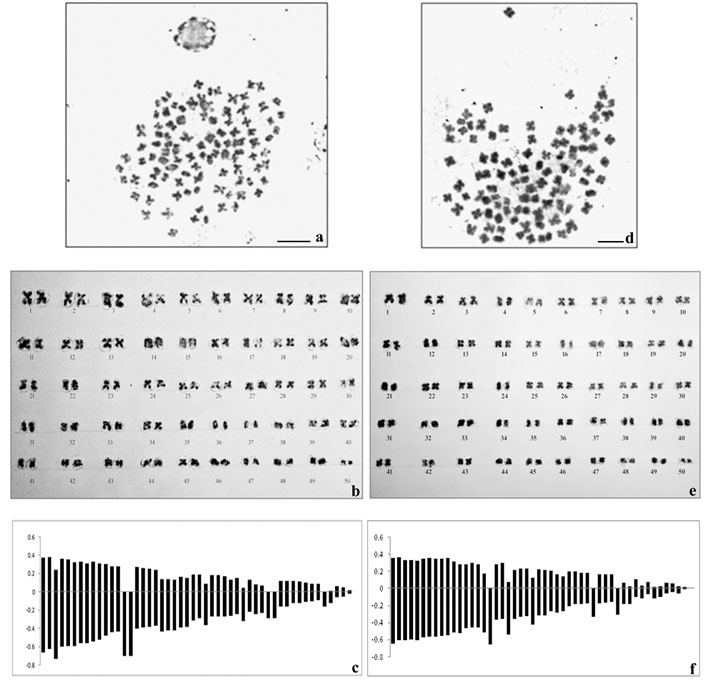 The results of NOR- banding revealed the presence of NORs on two submetacentric pairs of NOR banded complement (Fig. 2a). NORs are associated with gene expressions. The NOR-banded karyotype is represented in figure 2b.  By G-banding, a series of light and dark bands were produced that allow for the positive identification of each chromosome in the complement (Fig. 3a). The dark bands are A–T rich, heterochromatic regions of the chromosomes, while the light bands are C–G rich, euchromatic regions. The G-banded karyotype is respresented in figure 3b. 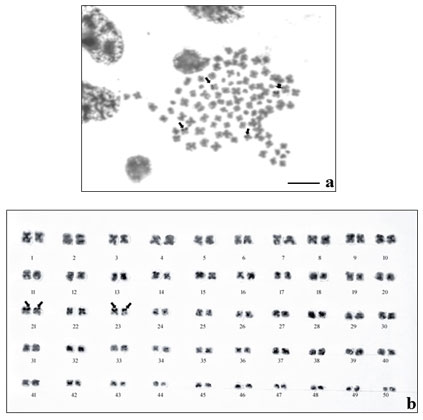 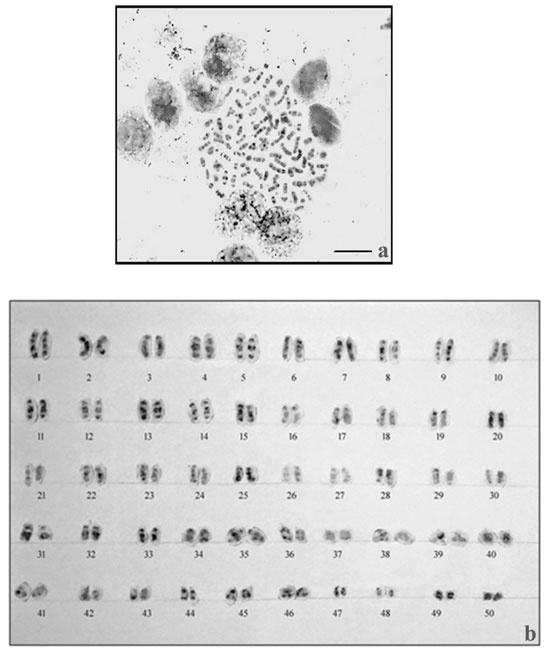 The present study is the first report on karyotype and chromosomal banding in Macrobrachium dayanum from UT of J&K. The diploid number observed to be 100 with the karyotypic formula 60m+16sm+12st+12t. Numerous gene expressions regions i.e. NORs were located on two submetacentric pairs by silver staining. Alternate light and dark bands on chromosomes depicting GC and AT rich regions were revealed by G banding. The present work will serve as baseline for the genetic improvement, hybridisation experiments, conservation and management programmes for Macrobrachium dayanum. The data obtained in current study will help the researchers in prawn systematics for the valid species identification. Further fluorescence in situ hybridisation and molecular studies like mitochondrial DNA analysis, 16S rRNA analysis, microsatellite analysis and DNA sequencing would strengthen the field of prawn genetics in Jammu region.

The authors would like to thank Head, Department of Zoology, University of Jammu, Jammu India  for providing necessary facilities to conduct the experiment.

Conflict of Interest: The authors declare no conflict of interest.

Damrongphol, P., Eangchuan, N., Ajpru, S., Poolsanguan, B. and Withyachumnarnkul, B. (1991). Karyotype of the giant freshwater prawn, Macrobrachium rosenbergii. Journal of the Science Society of Thailand. 17: 57-69.