Investigations on the Source Material of Oat Seeds, Avena sativa Through the Multidimensional
Ranking Method in Natural Conditions of Yakutia, Siberia, Russia

Eighty-three collection samples of  oat seeds  (Avena sativa L.) of various ecological, geographical, and breeding origins were studied in the conditions of Central Yakutia during 2017-2019 by the method of multidimensional ranking according to six economically valuable characteristics, namely, the duration of the growing season, grain yield, grain weight from the plant and panicles, the weight of 1.000 grains, and yielding tillering capacity. According to the results of the multidimensional ranking, the varieties were divided into three groups: the best, average, and worst. At that, from the data entered for 83 samples, the program determined priorities based on a combination of the duration of the growing season and yield. The group of best samples, based on a combination of economically valuable features, included 63% of samples from Europe, 30% from Russia, and 7% from Asia.

Grain production for food and feed purposes remains one of the priority areas in agriculture and crop production. Oat crops in Yakutia occupy 57% of the total area (Sakha Yakutia Stat 2020). The demand and market attractiveness of oats as a universal use crop has been growing in recent years. The Oats acreage occupies fifth place in the world after wheat, rice, corn, and barley. Grain is used for animal feed, in human nutrition, as well as a food raw material (Arendt and Zannini 2013; Loskutov and Polonsky 2017). Continuous improvement of grain varieties is possible only if there is a gene pool, which is represented by a wide range of samples from the collection of the Vavilov Institute of Plant Genetic Resources (VIR) (Bespalova 2015; Dzyubenko 2015; Petrova 2020).

At that, direct use of the gene pool is difficult, as a rule, due to the low adaptability of the material and the predominance of recombinants with low yields in the offspring, which were rejected at the first stages of the selection process (Friedrich et al. 2014; Singh and Kumar 2016). To create new varieties with a complex of valuable characteristics, high yield, and high quality of products in various environmental conditions, the well-studied source material was required (Petrova 2018). The ideal genotype should work well for many years both in one place (certain environmental conditions) and in a wide range of environments formed by external conditions in different geographic areas (Romagosa and Fox 1993; Petrova 2020).

The identification of new genetic factors that determined the high degree of manifestation of agronomic valuable characters in the selected samples of the collection will contribute to the creation of varieties with the required parameters (Randhawa et al. 2013; Petrova 2020). To successfully overcome objectively emerging barriers, it is necessary to systematically conduct selection work to find new genotypes with a complex of agronomic valuable characters, which largely depends on the correct selection of the source material and its diversity (Lubnin 2006). Therefore, the introduction of species and varietal diversity of oats of various geographical and selection origins in a specific natural and climatic zone is of great scientific and practical importance.

Only 210 mm of precipitation falls per year, including during the summer period (Gavrilova 1973). The ranking of collection samples according to the combination of agronomic valuable characters was carried out using the Snedecor computer program (Sorokin 2004). Ranking of collectible varieties of oats according to the set of characteristics using the algorithm developed by Yuzhakov and Sorokin (2000) allowed dividing them into three groups: the best (the sum of the ranks equal to 144.0-149.2) average (137.0-117.1), and worst (107.3-26.0). Ranking allowed to order the factors according to the degree of increasing or decreasing their influence on the social phenomenon of interest to the researcher (Korobov 2005). According to Montel (1998), there have never been two completely identical opinions or one grain was similar to another.

For data processing, a ranking operation was used, which consisted in the fact that the observed values of a random variable were arranged in ascending order (Montel 1998; Yuzhakov and Sorokin 2000; Korobov 2005; Toropov et al. 2020). The purpose of the research was to identify valuable collection samples of seed oats (Avena sativa L.) adapted to the conditions of Yakutia, followed by the selection of promising (best) cultivars as parent forms for hybridization by the multidimensional ranking method.

The research was carried out during 2017-2019 in the Pokrovsky Division of the Yakut Research Institute of Agriculture in the territory of the Khangalassky ulus of the Republic of Sakha (Yakutia), located in the middle taiga zone. At that, 114 collection samples were studied, among which later the most promising 83 samples were selected from the VIR and foreign selections. The main portion of the collection (50.6%) was made up of samples from Europe. Varieties from Russia occupied 35%. From the foreign assortment, varieties from America (9.6%), Asia (3.6%), as well as Africa (1.2%) prevailed. The most fully studied characteristics were precocity (duration of the growing season), grain yield, grain weight from a plant, grain weight from a panicle, weight of 1.000 grains, and yielding tillering capacity of plants. According to the data of the weather station in the Pokrovsk town of the Khangalassky ulus, Republic of Sakha (Yakutia), during the years of research (2017-2019), the growing season was characterized by insufficient moisture.

The sum of active air temperatures above +100C from sowing to the ripening of oats varied from 1688 to 1801, the amount of precipitation ranged from 116.6 to 144.0 mm. The lowest precipitation was in 2019 (HI (Hydrothermal Index) =0.65), more humid weather was in 2017 and 2018 (HI= 0.77-0.81) (Fig. 1). In the first decade of May, (2017) average daily air temperatures were quite low equal to 3.3oC. The minimum temperature dropped to -2.8oC. The average monthly temperature in May was 6.1oC, which was lower than the average annual norm by 1.5oC. In general, 2017 was characterized by insufficiently humidified weather conditions. In June, when the vegetative mass of oats intensively increases (plants undergo the main phases, such as stem elongation, earing, formation of inflorescences), the moisture demand was greatest, however, the water supply of plants at elevated temperature conditions, lack of air humidity, and the dry hot wind was often insufficient. 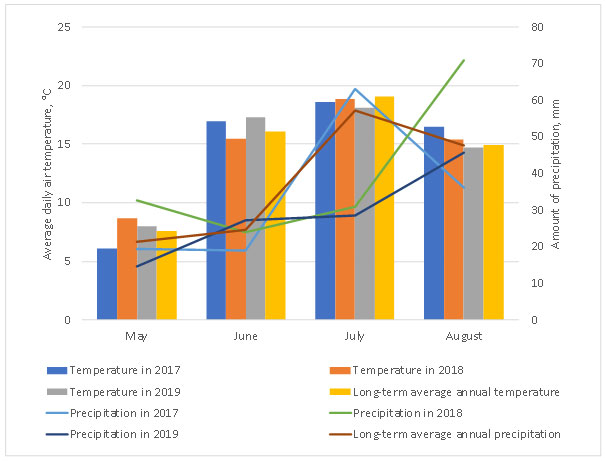 The agrochemical properties of the soil were determined using generally accepted methods in the laboratory of biochemistry and mass analysis of the Yakut Scientific Research Institute of Agriculture using the Infranid-61 infrared analyzer. The soil of the experimental plots was permafrost taiga-pale yellow, medium-loamy in mechanical composition with a humus content of 3-6% in the upper five-centimeter layer. With a depth, this indicator decreases to 1-1.5%.

The mobile phosphorus content according to Egner-Rome was 10.43 mg/100 g of soil, the exchange potassium according to Maslova was 27.4 mg/100 g of soil. The reaction of the aqueous extract was alkaline throughout the profile, the area of 7.11-7.55, the hydrolytic acidity of the soil was 0.84-0.98 mg/eq. per 100 g of soil. The type of salinity was sulfate-chloride (up to 49.1%). The composition of salts was dominated by sodium salts. Field experiments were based on one-factor experience, according to the generally accepted methods of field experience by I nthe previous studies (Dospekhov 1985).

All six features were evaluated together, and the boundaries of the sum of ranks were determined, according to which the size of the group could be changed by the user towards decreasing from 1/3 of the total number of objects since three groups of ranks were determined, namely, the best, average, and worst (Sorokin). This was the peculiarity, novelty, and value of the statistical analysis of the multidimensional ranking of sown oats according to agronomic valuable characters. The cultivars that fall into the best group was used as parent forms for the selection of hybridization.

Table 1. Ranking of collectible varieties of oats by agronomic valuable characters (average for 2017-2019)

One of the most important features that determine the degree of adaptability of a crop to specific growing conditions was precocity. The duration of the growing season was the most important biological characteristic that reflects the interaction of the genotype of the variety and the environment. Considering the growing season as the main moment in plant selection, Vavilov (1935) pointed out that it was associated with many properties that determine the resistance against frost, drought, diseases, pests, and improvement of grain quality.

In case of drought and a short growing season, the best type of plant was the one that may not have very high yield potential but was most resistant in all respects to adverse environmental factors. At the same time, the tougher the environmental factors, the more the selection possibilities were narrowed. In the context of a short northern summer, precocious varieties are needed, while against the background of drought – drought-resistant ones (Vasiliev 2000; Ivanov and Ivanova 2012; Toropov et al. 2020).

The duration of the main interphase periods of oats (sprouting – sweeping, and sweeping – ripening) varied depending on the variety. In July, oats were forming and filling grain. At this time, with sufficient moistening, a moderate temperature regime was extremely necessary. The analysis of the duration of the germination-earing period showed that the shortest period before earning in the collected samples was in 2019, on average, 27 and 33 days for various samples. The increased sum of temperatures (1801.2) in May, June, and July contributed to rapid ear formation. In (2017), the largest number of samples had an interphase period of ear formation – maturation lasting 48-53 days. The lowest indicator of the second period (45-47 days) is typical for precocious cultivars (Dzyubenko 2015; Toropov et al. 2020).

Due to heavy rains in July, abundant tillering began and the duration of the ear formation – maturation phase lengthened. The zoned Pokrovsky variety was subject to less fluctuation in the duration of the growing season, showing stability in all years (Table 2). The selected samples was used as sources of precocity in the selection process when creating varieties that reliably ripen in the natural conditions of Yakutia (Loskutov and Polonsky 2017; Petrova 2020).

Table 2. Results of evaluation of collecting samples of oats by precocity

One of the most important characteristics of any variety was its yield (Korobov, 2005). It was quite difficult to combine high productivity and precocity in one genotype. According to the evaluation results obtained by the method of multidimensional ranking, 27 varieties were distinguished in terms of the highest grain yield. These are samples from Germany, the Ulyanovsk Region, the Altai Territory, the Moscow Region, the Novosibirsk Region, the Czech Republic, the Kirov Region, Poland, Ukraine, Portugal, the Tyumen Region, whose yield was 11-66% higher than the Pokrovsky variety standard.

Table 3. Characteristics of varietal samples of spring oats, distinguished in
collection nurseries in terms of grain yield (average for 2017-2019)

The findings of the present study confirmed that one of the main indicators of the density of a productive stem is considered to be yielding tillering capacity. The productive stems formation is influenced by many factors. Employing the multidimensional ranking method in the analysis of grain yield and its structural elements allows identifying promising varieties of oats at the early stages of the selection process.

The study has been performed within the framework of a state assignment “Fundamentals of the creation of farming systems and agricultural technologies based on the preservation of the gene pool, selection of hybrids and varieties of a new generation of agricultural crops, their protection from harmful organisms, the preservation and reproduction of soil fertility in conditions of Cryolithozone of Yakutia” (registration number 0821-2019-0004).

Bespalova, LA (2015). The development of the gene pool, as the main factor of the third green revolution in wheat selection Bulletin of the Russian Academy of Sciences Vol 85 No 1 Pages 9-11.

Dospekhov, BA (1985). Methods of field experience (with the basics of statistical processing of research) Agropromizdat Russia.

Dzyubenko, NI (2015). Genetic resources of the cultivated plants – the basis of food and environmental security of Russia. Bulletin of the Russian Academy of Sciences, Vol 85 No 1 Pages 3-8.

Loskutov, IG and Polonsky, VI (2017). Content of beta-glucans in oat grain as a perspective direction of breeding for health products and fodder Agricultural. Biol. Vol 52 No 4 Pages 646-657.

Lukyanova, MV (1981). Methodological guidelines for the study of the world collection of barley and oats VIR Russia.

Sakha Yakutia Stat (2020). Agriculture in the Republic of Sakha (Yakutia). Yakutsk. (in Russian)

Sinitsyn, GI (1970). On some morphological indicators of precocity in varieties of spring wheat and oats Fodder Crops and their Production Technology. Leningrad, Vol 137 No 2 Pages 25-29.