Insight into the Keratinase Enzymes from Microbial Origins and their Applications

One of the environmental pollutants in the word is Keratin waste which is produced mostly from the poultry farms, slaughterhouses, and leather industries. Beneficial organisms are found in nature and considered as a well-known microflora (fungi and bacteria), which have the capability to degrade the keratin waste. This review deals with the different application of microbial keratinase. The keratinolytic microflora has been qualified to produce keratinase enzyme for biodegradation (enzymatic degradation). Keratinases are proteolytic enzymes accomplished of degrading insoluble keratin protein present in skin, hair, nail, or feather. Keratinases are active over wide range of conditions and are useful in bio recycling of keratin wastes into feed and fertilizers. They also have potential applications in leather, cosmetic, textile, biomedical and detergent industries. The applications of keratinases extend to energy generation and green synthesis of nanoparticles. Due to their ubiquitous biotechnological applications, techniques such as immobilization, optimization strategies, protein engineering and DNA recombinant technology have been used to improve their activities and stabilities thereby widening the scope for commercialization. This review records recent multi-functional applications of keratinases.

Khalel A. F, Aly M. M, Alghamdi A. G, Khalil A. F, Aloryani4 F. A. Insight into the Keratinase Enzymes from Microbial Origins and Their Applications. Biosc.Biotech.Res.Comm. 2021;14(1).

All over the world, production of livestock is increasing quickly because of population growth, increasing incomes, changes in lifestyles and nutritional habits. The leftover from animal meat production consists of keratinous materials such as chicken feathers, pig bristles, wool and horns and millions of tons of these co-products are produced each year (Jingwen et al., 2020). Chicken feathers from poultry processing plants is classified as low-risk materials for animals, the public, and the environment because of high producing of keratin (Verma et al., 2017).

Consequently, they can be considered as an abundant protein or amino acid source for new cycling processes targeting potential use in feeding, fertilizer in cosmetics and other applications (Callegaro et al., 2019). Searching for better and “green” ways to support the world health by motivation and utilization of natural byproducts are available. Unique keratinous materials come from the rich of certain amino acids, including in particular the sulfur-containing amino acid, cysteine, other amino acids like glycine, proline, arginine, and the essential amino acids valine, leucine, and threonine.

The highly stability of keratin is due to disulfide bridges formed among cysteine residues within and between keratin polypeptides (Callegaro et al., 2019). Keratins considered as insoluble materials and partial or complete degradation without denaturizing the amino acids are needed (Gindaba et al, 2019). The degradation processes provide useful bio- refinery methods for both protein and amino acids (Koentjoro and Prasetyo, 2021).

Keratin and its derivatives: Keratins are a major class of structural proteins that are highly resistant to biological degradation. Common enzymes, which break down protein, such as trypsin do not affect Keratins. They are water insoluble proteins. Like other proteins, they are made of a long string of various amino acids, which fold into a final three-dimensional form. There are two types of keratins; α-keratins and β-keratins, consisting of tightly packed protein chains in α-helices and β-sheets, respectively (Parry and North, 1998; Esawy, 2007). Additionally, keratins filament structures are stabilized by their high degree of cross-linking of disulfide bonds, hydrophobic interactions and hydrogen bonds. 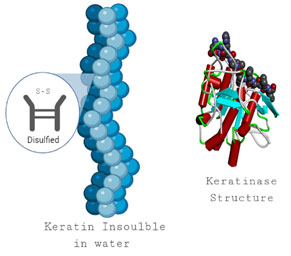 Keratinase production in liquid medium (submerged fermentation): Onifade et al., (1998) reported that when bacteria or fungi were grown in liquid medium containing keratinous substrates or feathers as carbon sources, extracellular intracellular keratinases were predominantly obtained (submerged fermentation). It is clear that keratin or feather act as an inducer for keratinases production however soy meal (non-keratin material) may also induce the enzyme release. 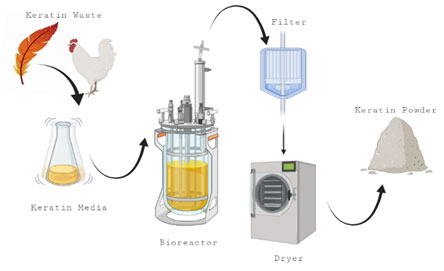 For example, Fervidobacterium islandicum AW-1 is keratinolytic microorganism has been considered as an important microbe for biodegradation of feathers and keratinous wastes. Potential fermentation process enables this bacterium to degrade feather with excellent activities (Yeo et al., 2018).  The used technique is advantageous by reason of its ability to apply substrates quite rapidly and is best suited for the bacteria that need high moisture contents (Koentjoro and Prasetyo, 2021).

In this method, the screening and isolation of bacteria are the most power step to start the process. The ability of the isolates to degrade the feather polymers directly and highly fermented was selected. The ability  of  the microbe  to  degrade  feather  is  affected  by optimization  of  feather  concentration,  incubation  time, pH  and  temperature (Osman et al., 2017). 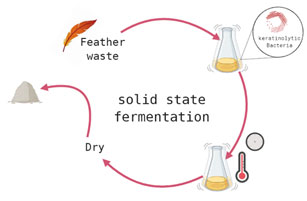 Wound dressings: Keratins is a rich source of proteins and have a clear functions in wound healing because Keratin material found mainly as fundamental components of the skin (Kelly, 2016). Proteins of Keratin may be obtained from wool using processes that do not hydrolyze peptide bonds, which allows the keratin proteins to retain a form and function similar to native keratins. Topical creams can then be prepared from purified keratinase which can be incorporated into dressings and Keraplast. These treatments are often used for the treatment of persistent wounds and have been found to be therapeutic (Kelly, 2016) as shown in Figure 4.

Figure 4: Keratin sources used for keratinase production and its applications. 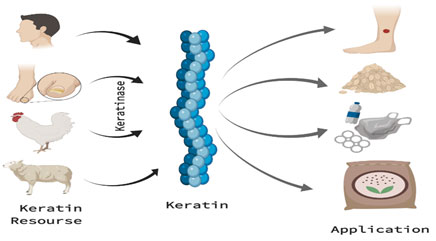 Keratinase for Keratin waste management: The huge increase in the population is linked to increases in wastes production.  Biodegradation    of different   wastes  to useful materials or products is important  for meeting the demand of the crowded population. Accordingly, there is an enlarged amounts of agro- industrial wastes, including keratin and feather wastes from slaughterhouses, poultry farms and leather industry  (Tesfaye et al., 2017; Srivastava et al., 2020).

It is clear that, feather wastes increased every minute and feather treatments are urgent to decrease bad environmental impacts and maintain healthy environment.  Thus, keratinases from bacteria or fungi can degrade different waste components in addition to prions by using cocktail enzymes from active microbes. Microbial keratinase had very remarkable feather degrading ability and thus could be usefully used in management possess (Lateef et al., 2015).

Keratin wastes may be keratins, feathers, collagens, elastins, wool and prion proteins all these wastes are generated during meat industries and considered dangerous wastes must be efficiently degraded by the keratinolytic enzymes (Zhao et al., 2012). Also, wool waste can be degraded by keratinase obtained from Stenotrophomona smaltophilia as reported before (Fang et al., 2013). Therefore, using a mixture of bacterial keratinases can be used as potential application for bio-treatment of slaughterhouse or abattoirwaste stream/effluents to simple important materials.

Thus, professional management of  keratin and feather wastes through recycling into value-added and proper products is important.  The costs of chemical management process may be high, thus efficient means of biological treatments can be applied to prevent the harmful effects of these wastes on the environment (Nnolim et al., 2020).

Animal feed production: For decades, it is well know that feather meal can be used as supplements or a feed but the nutritive value of the meal is different due to the used protein material in the feed. Proteins structure in feathers or other keratinous materials are difficult to be broken or digested by ruminants or livestock due to structural orientation and presence of different chemical groups (Nnolim et al., 2020). Chemical degradation of feather wastes can be used to prepare feather meal but this method is costly high and need high energy input in addition it denatures important heat sensitive proteins (Dong et al., 2017). Thus, keratinases from keratinolytic microorganisms can be used for the recycling techniques used for waste managements (Gegeckas et al., 2018).

keratinolytic  wastes are rich in many amino acids and the hydro-thermal treatments of keratinolytic wastes reduces nutritional values of the products as they destroyed definite essential amino acids like methionine, lysine, histidine and tryptophan and inability to release some amino acids from the keratins. Consequently, keratinases from microorganism origins are a good alternative for bio-treatment and may be used for keratinolytic wastes degradation.

as reported before, the keratinolytic isolate B. subtilis may be used for degradation of keratins and production of proteinous hydrolysate with as potential values from wool and feather wastes (Fakhfakh et al., 2013; Volik et al, 2020). Keratinase degradation of feather is more beneficial than microbial degradation, as it avoids the possibility of exposure of the environment to the microbe which may be a pathogen. Nutritional uses of keratinase daily in growing and nursery pigs as supplements improve immune response, weight gain, nutrient digestibility, intestinal morphology and ecology (Wang et al., 2011).

Bacillus licheniformis hydrolyzed feather to free amino acids which increased  the growth chickens (Williams et al., 1991) while feather hydrolyzate obtained  by B. licheniformis LMUB05 showed no significant effect on birds performance (Adetunji and Adejumo, 2018). For these reasons, biodegradation of keratins which serves as an actual source of nutrient-rich feeds, and feed supplements with lots of potential applications in animal husbandry needs more detail studied to enhance to biodegradation process using the best bacterium or keratinases (Nnolim et al., 2020).

Production of bio-fertilizer: Keratin composed of different amino acids and many microorganisms are able to degrade it by production of keratinase.  An example for a keratinase-producing strain is B. subtilis which is demonstrated plant growth-promoting and broad-spectrum antimicrobial activities, as it produced indole acetic acid (IAA) and antifungal activities in the course of keratinase production (Jeong et al., 2010).

Microbial keratinases have many industrial and biotechnological applications including management of wastewater, treatments and recycling leathers, feathers and agricultural wastes. They can be used in textile technology, food and feed preparations, medical and pharmaceutical applications, agriculture industries (bio-fertilizers and composting, plant-growth promotion), and bio catalysis preparations. Search for new sources of keratinases from bacteria using new techniques to increase enzyme production, decreased the production costs, enhanced the enzyme characters in addition to enzyme stability at high temperature and different pH are urgently needed. The multi-functionality of keratinases may encourage scientists for more studies which guide us for production of keratinase with excellent characters for bioconversion of feather or different keratinous wastes to free amino acids or bio-fertilizers.

Adetunji C O and Adejumo I O (2018). Efficacy of crude and immobilized enzymes from Bacillus licheniformis for production of biodegraded feather meal and their assessment on chickens. Environ. Technol. Innov., 11, 116–124.

Aly M M, Khalel A and Hassan S (2019). Isolation, Identification, and Characterization of  a Keratolytic Bacterium From Poultry Wastes. IOSR Journal of Pharmacy and Biological Sciences, 14.5: 46-50.

Onifade, A.A., Al-Sane, N.A., Al-Musallam, A.A. and Al-Zarban, S. (1998). A review: Potentials for biotechnological applications of keratin-degrading microorganisms and their enzymes for nutritional improvement of feathers and other keratins as livestock feed resources. Bioresource Technology, 66:1-11.

Prakash P, Jayalakshmi SK  and Sreeramulu K (2010). Production of keratinase by free and immobilized cells of Bacillus halodurans strain PPKS-2: Partial characterization and its application in feather degradation and dehairing of the goat skin. Applied Biochemistry and Biotechnology, 160 (7): 1909-1920.