In vitro Evaluation of Biocontrol Agents Against Fusarium
oxysporum to Eliminate Wilting of Cumin.

Cumin (Cuminum cyminum L.) is an essential herb of dryland. Although cumin is an economic cash crop, limited efforts have been made for varietal developments. In India, Rajasthan, Gujarat is central cumin cultivar states, the zone under cumin development is around 841940 hectares with yearly productivity of 546750 tones, which contributes around 8200 crore rupees yearly. Gujarat, it is covering a territory of around 3, 37007 hectares. Several biotic stresses can confine productivity. Cumin is seriously affected by the Fusarium wilt disease caused by the soil-borne pathogen Fusarium oxysporum and Fusarium equiseti, resulting in yield losses of up to 80% depending on severity of infestation. Biological control has emerged as one of the most promising alternatives to chemical fungicides. The experiment was carried out to assess their possible use as bio-agents for several antagonistic fungi and bacteria under in vitro conditions using the food poison technique with selected biological control agents.

Trichoderma harzianum, T. konngii, T. viride, Pseudomonas fluorescens, P. putida, A. niger, A. flavus, Penicillium citrinum, Serratia marcescens, Bacillus subtilis, Bacillus cereus, Bacillus amyloliquefaciens, Saccharomyces cerevisiae were used for this study. In-vitro test showed that selected microbes were showing antagonistic activity towards F. oxysporum. Trichoderma spp. was the best bio-agent, who had 66 to 81% inhibition zone. Aspergillus spp and Pseudomonas spp. emerged as effective bio-agents with 63-67% and 68 to 76% zone inhibition. The aim of this study is to become a suitable milestone for future studies and provide with updated information on ways to eliminate wilting in cumin.

Cumin (Cuminum cyminum L.) is widely grown as an important spice crop in arid and semi-arid regions of the Indian subcontinent. Although cumin is an economic cash crop, limited efforts have been made for varietal developments (Bhatnagar et al. 2013; Meena 2015). The fungal disease wilt, caused by the soil-borne phytopathogens, Fusarium oxysporum f. sp. cumini (Foc), is one of the major threats to cumin production in India and worldwide. It is a small, slender annual herbaceous plant, with a glabrous, branched stem 20 to 30 cm tall with a diameter of 3 to 5 cm diameter tending to hang down under its weight (Özer and Bayraktar 2015; Pandey et al. 2016; Didwania 2019).

It is also used in food for flavor, it has many important medicinal. It is also a necessary part of the Indian system of medicine called Ayurveda (Singh et al. 2017). It is native to the Mediterranean and Near Eastern regions, mainly cultivated in India, Egypt, Libya, Iran, Pakistan and Mexico. It is extensively cultivated in India, China, South Russia, Japan, Indonesia, Iran, Morocco, Turkey, Egypt and Argentina. India is the largest producer, consumer and exporter of cumin in the world. In India, Rajasthan, Gujarat, Madhya Pradesh, Haryana, Punjab, Uttar Pradesh and Bihar (Khalequzzaman et al. 2018). India exports cumin seed to Bangladesh, Japan, Malaysia, Nepal, Pakistan, Singapore, South Africa, UAE, UK, USA and many other countries (Didwania 2019).

The demand for cumin is moderately increasing in the domestic and international market, which plays a vital role in the national economy. However, the production and productivity of cumin are decreasing year after year due to non-availability of good quality seed, slow and uneven germination, and low adoption of seed production technologies being some significant obstacles. Seed production potential of cumin is also greatly affected due to degradation of seed quality, microbial load, a heavy infestation of diseases and pests, traditional harvesting & processing, unscientific and unhygienic handling post-harvest and storage (Trivedi et al. 2019). Because of the great economic importance of cumin, it is essential to study wilt and blight diseases in cumin to control them in best possible manner. This can be achieved by paving the way for devising management strategies through bio-control.

To study the isolation and identification of pathogen, the sample of wilted plants were taken from the cumin field. A small part of the infected stem was taken and sterilized with 0.01% sodium hypochlorite, followed by three washes by sterile distilled water. The tissue was then placed on Potato dextrose agar medium plates. The stem was allowed to grow on Potato Dextrose Agar medium plate for 2 – 5 days at room temperature in dark condition and further sub-cultured to obtain pure isolates. The culture was maintained on PDA for immediate use and for long term use, the culture was stored at 4°C (Yadav et al. 2020; Aziz et al. 2021).

To study antagonism of bacteria and fungi, Trichoderma harzianum, T. konngii, T. viride, Pseudomonas fluorescens, P. putida, A. niger, A. flavus, Penicillium citrinum, Serratia marcescens, Bacillus subtilis, Bacillus cereus, Bacillus amyloliquefaciens, and Saccharomyces cerevisiae were tested for their antagonistic activity against F. oxysporum in dual culture technique. Culture disc of each potential antagonist and test pathogen were taken from 7-days old culture and transferred aseptically to 90 mm petri plates on opposite sides. The disc of F. oxysporum was placed 2-days earlier than the antagonist to compensate for the slow growth of the pathogen.

The distance between the inoculum points of test pathogen and antagonist was kept as 5 cm. The disc of test the pathogen placed at the centre in separate Petri dishes served as a control. The inoculated plates were incubated in a Biological Oxygen Demand incubator at 28±1°C. Observations on growth of antagonists and F. oxysporum from the centre of the disc towards the centre of the plate was recorded after seven days of inoculation. The growth inhibition of pathogen over control was calculated using the formula given by (Vincent 1947; Yadav et al. 2020).

Isolation and identification: Sample were taken from infected plant parts confirmed Fusarium was the causative pathogen in the cumin field belonging to the geographical location of Ravi Pura Kampa, Aravalli district, North East Gujarat. After surface sterilization, the same were inoculated in PDA plates and incubated at room temperature in dark condition for four days (Figure 1). 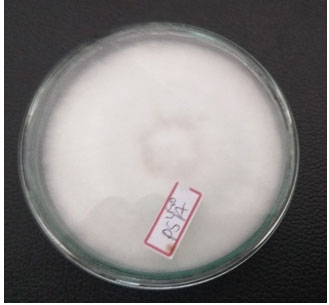 The mycelial morphology of pathogen was observed as white mycelia, with presence of grayish spores. Microscopic observation was done by LABOMED microscope (Figure 2). The fungus forms studied were sickle shaped macroconidia, ovoid microconidia and chlamydospores (Figure 3). The microconidia of isolate were small, 1/2 celled and hyaline with oval to Reni form and oval to oblong with slightly curved shape. Length of spore ranged from 3.48 to 17.38 µm, the width ranged from 2.30 to 4.55 µm.

Macroconidia were long, slightly curved or boat shaped, variable in size and smoothly rounded or pointed at the tip, mostly with 2 to 5 septa and hyaline in colour. Length ranged from 16.89 to 59.30 µm, while the width ranged from 4.08 to 6.98 µm. Chlamydospores were thick walled, hyaline in colour, varied in shape, produced intercalary and terminal, single and in pair or in chain identification (Table 1). 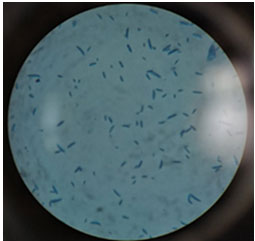 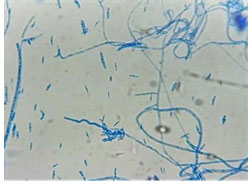 The present findings corroborate with the reports of Cook and Baker (1983), who reported that Trichoderma and P. citrinum effectively inhibited growth of the Fusarium oxysporum which may be due to the fungi static effect. In the present investigation, maximum disease control was observed in Trichoderma spp.  and pseudomonas spp. It was also reported by Abou-Zeid et al. (2003) Pieta and Pastucha (2004) Abo- Sedera (2005) El-Khair et al. (2010) and Otadoh et al.

(2011) that treatment of Trichoderma album, T. hamatum, T. harzianum, T. koningii, Trichoderma reesei and T. viride provides adequate protection against Fusarium spp. In alignment with Deepak et al. (2008) research, results of the present study revealed that the maximum inhibition of radial growth of F. oxysporum f. sp. cumini was 81% in the treatment of Trichoderma harzianum and 68 % in A. niger (Deepak et al. 2008; Rathore et al. 2020). Chawla and Gangopadhyay (2009) have successfully used Trichoderma harzianum, T. viride, P. fluorescens, and B. subtilis to reduce wilt incidence of cumin plants, and this could support the present study. Others have previously reported suppression of disease by Bacillus spp (Dukare and Paul 2021).

(Yu G et al. (2010) and Wang et al. (2011) observed 44.4 % to 73.9 % inhibition of F. oxysporum. Kumar and Dubey (2012) reported that T. harzianum and T. viride also gave satisfactory control of Fusarium wilt in chickpea and coriander. Tan (2015) reported that Serratia marcescens showed 78.7 % inhibition of pathogen in banana wilt (Tan 2015; Dukare and Paul 2021). Hussain et al. (2016) observed that the 95.24 % inhibition zone was observed by Penicillium spp. against the pathogens similar to present study. Kumar et al. (2016) tested the efficacy of different fungal and bacterial antagonists against the wilt of cumin and found that P. fluorescens was highly inhibitory to the pathogen in vitro condition. Dhar et al. (2018) checked out efficiency of a Serratia marcescens to manage root rot disease in tea.

Bubici et al. (2019) reported at least 143 articles about disease management using biocontrol agents the findings of the current work are also matched with Rathore et al. (2020).  Dukare and Paul (2021) observed that Pseudomonas sp. NS 1 and Bacillus sp. NS 22 displayed the potential as bio fungicide under in vitro condition which is similar to current finding (Rathore et al. 2020; Dukare and Paul 2021).

The findings of the present study showcased a significant value of microorganism; it has been widely used as a biocontrol agent against many fungal pathogens. Among the tested isolates, Trichoderma harzianum, T. konngii, T. viride, Pseudomonas fluorescens, P. putida, A. niger, A. flavus, Penicillium citrinum, Serratia marcescens, Bacillus subtilis, Bacillus cereus, Bacillus amyloliquefaciens, Saccharomyces cerevisiae was the most suitable candidate as they exhibited the capacity to inhibit maximum growth of the fungal pathogen.

This study may enhance the knowledge in identifying the potential isolates for future use as a biocontrol agent against wilt disease of cumin. In future, it would be of interest to further investigate the potential of T. harzianum, T. konngii, T. viride, P. fluorescens, P. putida, A. niger, A. flavus, P. citrinum, S. marcescens, B. subtilis, B. cereus, B. amyloliquefaciens, S. cerevisiae isolates under controlled and field conditions as a biocontrol agent against cumin wilt.

Conflict of interest: Authors declare no conflicts of interests to disclose.

Tan, D, Fu, L, Han, B, et al. (2015). Identification of an endophytic antifungal bacterial strain isolated from the rubber tree and its application in the biological control of banana Fusarium wilt. PLoS One, 10(7): 0131974.