of Engineering and Technology, Radaur, India.

5Department of Biochemistry, International Institute of Veterinary Education and Research,

Diabetes is considered to be a fatal disease as it brings many malfunctioning to the body. Currently used therapy is found to possess lots of side effects. Hence, we need to turn to more potent and safer options. An alternative choice can be phytochemicals of common use that will be cost-effective and safe. Therefor the aim of this research was to identify and analyze plant based metabolites as glusocidase inhibitors. This enzyme is known to enhance carbohydrate digestion and responsible to increase the level of glucose in blood circulation. Hence inhibitors of glucosidase are in limelight all over the world to regulate type-2 diabetes by reducing carbohydrate digestion and absorption. In the present study two phytochemicals prangenidin and columbin were selected as ligands. α-glucosidase was chosen as ligand’s receptor from Protein Data Bank. Molecular docking of ligand & receptor was carried out by using PyRx molecular docking software.

The docking results are found to be quite promising with the binding affinity of -6.6 kcal to -7.7 kcal and -6.4 to -8.1 kcal for prangenidin and columbin respectively. It can be concluded from the results of the present study that these phytochemicals have a high affinity to bind with α-glucosidase and may be used in the near future to deal with diabetes type II. In addition, the present study may be helpful to initiate in vitro/ in vivo research by using these phytochemicals. Such evidence based researches will provide a platform to start clinical trials for the treatment of fatal diseases like diabetes.

α-Glucosidase (EC 3.2.1.20) is considered as a key enzyme that regulates the conversion of carbohydrates into glucose. Therefore, it is known to regulate the blood sugar level and control type–II diabetes (Venable and Aschenbrenner 2002; Park et al. 2008; Gamblin et al. 2009; Rawling et al. 2009).

The ligand of the present study i.e., Prangenidin is also known as Alloimperatorin and belongs to the coumarin compound. It is an active chemical content of the plant Aegl emarmelos (Indian name- Bael) and known to be extracted from Angelica dahurica. It is found to have anti-inflammatory, anti-oxidant, and anti-neoplastic activity (Chen et al. 2008; Li et al. 2016).

Another ligand of the present study is Columbin, an organic heterocyclic compound. It is an active chemical content of the plant Tinospora cordifolila (Indian name- guduchi) and known to have anti-inflammatory and anti-cancer properties (Abdelwahab et al. 2012). Furthermore, a search on the pub-med timeline has shown an increasing trend of research on diabetes (Chung et al. 2019; Zhang et al. 2020; Chen et al. 2021). Therefore, in the present study, Prangenidin and Columbin ligands were docked with the α-glucosidase enzyme to find out their binding potential with enzyme and to explore future outcomes to control diabetes type –II.

We performed molecular docking between ligands (Prangenidin and Columbin) & enzyme α-glucosidase. The enzyme molecule was obtained from PDB in its PDB format and its PDB ID is 5DKY. Protein structure was viewed in BIOVIA Discovery Studio Visualizer, and hetero-atoms, water molecules, ligand groups and nucleic acid groups were removed. Polar hydrogens were added and nonpolar hydrogens were merged. Missing atoms were checked and repaired before applying Kollman charges. The macromolecule was saved in PDBQT file format for the further application.

The ligand structures were obtained from chemsketch in its SAG format and were checked for drug likeness and its physiochemical properties by using Lipinski rule of 5. The software used for molecular docking was PyRx, a useful virtual screening software for computational drug discovery to screen libraries of compounds against potential drug targets. PyRx includes docking wizards with an easy-to-use set up which makes it a valuable tool for Computer-Aided Drug Design (Tuli et al. 2021).

Molecular Docking or QSAR is a technique to explore the binding affinity of the ligand to its receptor. In this method, a scoring function used to find the highest affinity position for the tested ligand in the active site of the receptor. In molecular docking, it has been known that the lesser the energy relates to high affinities between ligand and receptor. QSAR analysis of molecules has gained importance to find a convenient ligand before performing expensive and time-consuming wet laboratory experiments.

It represents strong H-bonds formation between ligand and receptor. Figure 2 represented the docked pose of Columbin and α-glucosidase receptors in the software. The results of the present study are found to be consistent with previously published docking results that showed binding energies in the range of -7.7 to -8.1 kcal may be considered as promising results (Wang et al. 2017; Rehman et al. 2019).

Table 1. Physio-chemical Properties of ligands with Lipinski rule of 5* (Molecular mass less than 500 Dalton, High lipophilicity (expressed as LogP less than 5), Less than 5 hydrogen bond donors, less than 10 hydrogen bond acceptors, Molar refractivity should be between 40-130).

Table 2. The table shows interaction between the active poles of the
ligand and the amino acid of the receptor (α-glucosidase). 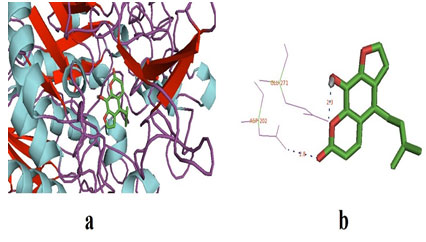 Table 3. This table shows the receptor and the ligand docked, force field with their
binding affinities at different position and the best energy minimization being -7.7.

Table 4. This table shows the receptor and the ligand docked, force field with their
binding affinities at different position and the best energy minimization being -8.1. 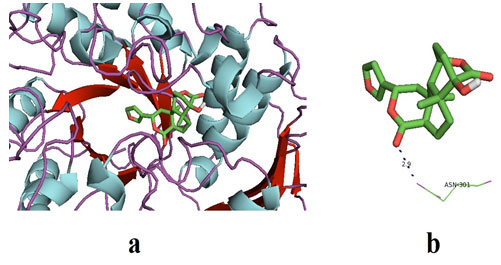 Therefore, diet modification may contribute to preventing a significant number of such dreadful diseases. Furthermore, existing conventional approaches of drug discovery are very much time consuming and labor-oriented. Moreover, diagnosis and progression rate of such diseases are very fast. Therefore, in such a drastic scenario computational biology may help the pharmaceutical industry to fast the drug discovery processes (Wooller et al. 2017).

Computational tools of docking can not only tell the interactions of the ligand with receptor but also define the possibility of drug synthesis from a large number of chemical database (Hasselgren and Myatt 2018; Thomford et al. 2018; Mochizuki et al. 2019; Patel et al. 2020; Gupta et al. 2021). Therefore in order to understand the interactions and binding affinities of ligands with glucosidase receptor, we performed molecular docking studies by using PyRx software. Out of tested ligand columbin was found to interact more firmly with glucosidase receptor with more docking score as well as H-bond formation capability.

Furthermore results of present study explore the binding affinity of both the ligands for glucosidase receptor with active interacting amino acid residues GLU 271, ASP 202, and ASN 301. Previously also in silico studies of phytochemicals or their synthetic derivatives such as oriciacridone F and O-methylmahanineand 2-(benzo[d][1,3]dioxol-5-yl)-4H-chromen-4-one, respectively have been carried to find α-Glucosidase Inhibitors (Zafar et al. 2016; Meena et al. 2019).

More recently, three compounds named as 50-hydroxymethyl-10-(1, 2, 3, 9-tetrahydro- pyrrolo(2,1-b)quinazolin-1-yl)-heptan-10-one(1),-terpinyl-glucoside  (2), and machaeridiol-A were extracted from Psychotria malayana and docked with glucosidase (Nipun et al. 2020). Results revealed that four hydrogen bonds formed at ASP352, ARG213, ARG442, GLU277, GLN279, HIE280, and GLU411 and energy minimizarion were in the range of -7.6, and -10.0 kcal/mole. Therefore results of present study are in good agreement with previously published work so as to find out active interacting residue as well binding affinities.

The findings of the present study revealed molecular docking between ligands (Prangenidin and Columbin) and α-glucosidase. We found that the binding energies of these two ligands ranging from -6.4 to -8.1 and also the hydrogen bond interaction are quite strong. Diabetes mellitus is one of the biggest threats to human health which is increasing at an alarming rate. This work is an effort to put forward these two ligands as future anti-hyperglycemic agents.

Conflict of interest:  Authors declare no conflicts of interests to disclose.

Nathan, DM, Buse JB, Davidson MB et al. (2006).  Management of hyperglycaemia in type 2 diabetes: A consensus algorithm for the initiation and adjustment of therapy. A consensus statement from the American Diabetes Association and the European Association for the Study of Diabetes. Diabetologia 49: 1711–1721.doi: 10.2337/dc06-9912.PMID: 16873813.