Several articles have stated effectiveness in identifying the deleterious and disease associated mutations, thus predicting the pathogenic SNPs in correlation to their functional and structural damaging properties ( Adzhubei et al., 2010 Choi et al 2015). Computational studies have previously provided an efficient platform for evaluation and analysis of genetic mutations for their pathological consequences and in determining their underlying molecular mechanism. Single nucleotide polymorphism (SNPs) is a common genetic variation contributing greatly towards the phenotypic variations (Hecht et al., 2015). SNPs can alter the functional consequences of proteins. In the coding region of gene, SNPs may be synonymous, non-synonymous (nsSNPs) or nonsense. Synonymous SNPs changes the nucleotide base residue but does not change the amino acid residue in protein sequence due to degeneracy of genetic code.

The nsSNPs also called missense variants, alter amino acid residue in protein sequence and thus change the function of protein through altering protein activity, solubility and protein structure. (Calabrese et al., 2009). SNPs have been emerged as the genetic markers for  many diseases and there are many SNPs markers available in the public databases. hundreds of new SNPs have been mapped to human BLM genes. However, not all SNPs are functionally important. Despite extensive studies of helicase proteins in human and effect of their polymorphism in cancer (Hecht et al., 2015), no attempt was made to analyze to establish the functional consequences of pathogenic nsSNPs of BLM gene. The aim of this study is to identify the high pathogenic SNPs of BLM gene and determine functional consequences using computational methods.

Predicting deleterious and damaging nsSNPs:In order to predict the damaging or deleterious nsSNPs, multiple consensus tools were employed by using online tool VEP (http://www.ensembl.org/Tools/VEP). VEP advantages include: it uses latest human genome assembly GRCh38.p10, and can predict thousands of SNPs from multiple tools including SIFT, PROVEAN, Condel, and PolyPhen-2, at a time (McLaren et al., 2016). 11 nsSNP rs-ids were uploaded to VEP tool to get the prediction results

Sift: The algorithm predicted that the tolerant and intolerant coding base substitution based upon properties of amino acids and homology of sequence (Ng PC et al., 2003). The tool considered that vital positions in the protein sequence have been conserved throughout evolution and therefore substitutions at conserved alignment position is expected to be less tolerated and affect protein function than those at diverse positions. SIFT predicted substituted amino acid as damaging at default threshold score <0.05, while score ³  0.05 is predicted as tolerated.

Provean: The online tool uses an alignment-based scoring method for predicting the functional consequences of single and multiple amino acid substitutions, and in-frame  deletions and insertions (Choi et al., 2012). The tool has a default threshold score, i.e. -2.5, below which a protein variant is predicted as deleterious, and above that threshold, a protein variant is neutral.

Polyphen-2: This tool is predicting the structural and functional consequences of a particular amino acid substitution in human protein (Ramensky et al., 2002). Prediction of PolyPhen-2 server [20] is based on a number of features including information of structural and sequence comparison. The PolyPhen-2 score varies between 0.0 (benign) to 10.0 (damaging). The PolyPhen-2 prediction output categorizes the SNPs into three basic categories, benign (score < 0.2), possibly damaging, (score between 0.2 and0.96), or probably damaging (score >0.96). 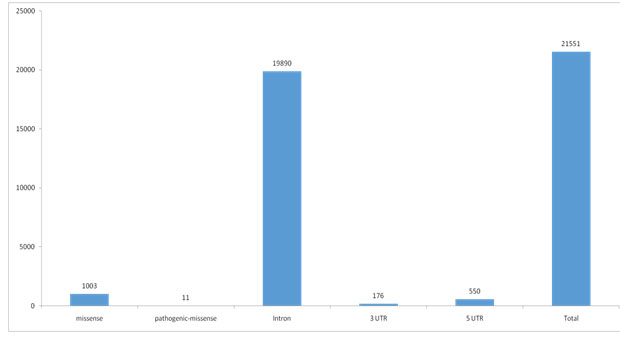 Predicting deleterious and damaging pathogenic nsSNPs: In order to predict the damaging or deleterious pathogenic nsSNPs multiple consensus tools were employed. Initially, online tool VEP was used . VEP advantages include: it uses latest human genome assembly GRCh38.p10, and can predict thousands of SNPs from multiple tools including SIFT, Condel, and PolyPhen-2, at a time. 11 nsSNP accession numbers were uploaded to VEP tool and the prediction results were taken on default scores of consensus tools based on sequence and structure homology methods:  (a) SIFT (score <-0.5) (b) Polyphen (score >0.96) (c) PROVEAN (score< 2.5) and Condel (score >0.522). In order to get a very high confident nsSNPs impacting structure and function of BLM gene, 6 nsSNPs (Table 1) are found to be deleterious or damaging by all four prediction tools. These 6 nsSNPs rs367543034 of mutation G952V, rs367543023 of mutation H963Y, rs137853153 of mutation C1036F, rs367543029 of mutation C1055Y, rs367543032 of mutation D1064G and rs367543025 of mutation C1066Y.

Table.1 Prediction of 11 pathogenic missense SNPs of BLM helicase gene using prediction tools such as SIFT, Condel, Polyphen and PROVEAN, deleterious predicted by all four tools are shown in bold.

This analysis shows that six SNPs, G952V, H963Y, C1036F, C1055Y, D1064G and C1066Y have high prevalence for disease association of BLM,  the mutation in cysteines (C1036F, C1055Y, C1066Y) and glutamate (D1064V) are in the Zn binding subdomain, which results in the loss of Zn binding upon mutation and alters the function of BLM helicase is reported (Guo  et al., 2005). These mutation in RQC domain affect the highly conserved cysteine residues involved in Zn coordination .  While mutation in Glycine G952V and mutation in histidine H963Y which alter amino acid residues in the ATPase domain also reported involved in cellular defects (Shastri  and Schmidt 2015).

This computational analysis of SNPs of the human BLM protein identified 6 highly damaging pathogenic nsSNPs. Prediction analysis shows that SNPs G952V, H963Y, C1036F, C1055Y, D1064G and C1066Y have high prevalence for disease association. Data implies that the reported nsSNPs could potentially alter structure and hence the function of BLM protein resulting in pathogenicity with abnormal symptoms describing the disease states. These nsSNPs associated with significant pathogenicity will offer valuable information in selecting SNPs that are expected to have impending functional influence and contribute in understanding the functional roles of this gene.

This work was not supported by any grants agency. We acknowledge with thanks Deanship of Scientific Research (DSR), at King Abdulaziz University, Jeddah, KSA for providing their support.

González-Pérez A, López-Bigas N.(2011) Improving the assessment of the outcome of nonsynonymous SNVs with a consensus deleteriousness score, Condel. Am J Hum Genet. 8;88(4):440-9.