Three DNA barcode loci consisting of ITS, matK and rbcL have been used intensively to discriminate jewel orchid species. Nevertheless, the discrimination ability of each locus is inconsistent among researches. Therefore, it is necessary to simultaneously check a large number of published DNA sequences to get an overview of the ability to recognize orchid varieties. In this study, total of 124 DNA sequences of these three loci from Genbank were evaluated for the discrimination ability on 11 species belonging to five genus of jewel orchids. The obtained data show the significant variability of barcode sequences at both taxonomy levels. Distinguishing ability descend from matK, ITS and rbcL. The obtained results suggest that the discrimination capacity of ITS, matK and rbcL DNA barcode loci are variable among different species of jewel orchid plants, in which matK and ITS loci reveal more potential for genetic classification at genus and species level of this herbal plants. In  future, higher sequence number should be included in the analysis to give more reliable result. The information from this study could be useful in conservation and development programs of jewel orchid plants.

Jewel orchid is a general term of different species belonging to Orchidaceae family. This plant can be found in large area from Southern China, Northeast India, Thailand, Vietnam, the Philippines, Malaysia, Indonesia and Myanmar. Beside ornamental use, jewel orchid is got more attention due to its high medical value. Different parts of plant are applied for treating numerous diseases such as abdominal pain, diabetes, nephritis, fever, hypertension, liver, and pleurisy (Du et al., 2008) since several medicinal compounds with strong biological activity have been identified in these plants (Liang et al, 1990; Lin et al., 1993; Panda et al., 2014).

The term “jewel orchid” is used to refer to various species in Orchidaceae family having velvety brocade-like leaves with beautiful veins. Nevertheless, the medicinal and economical value is species dependent, thus, an accurate classification would be crucial importance as a basis for conservation and development. Traditionally, jewel orchids are discerned based on plant morphological characteristics such as leaves, stem structure, or flowers (Trinh et al., 2020).

While this method has been confirmed economically due to its ease and low cost, it is error-prone method due to identical external morphology features, large variable polymorphisms between adult and juvenile stages, and environmental factors as well as the plant growth development phases, all are leading to inaccuracy (Ahmedand and Mohamed, 2014).

Furthermore, the inability to precisely identify specimens under damaged or processed conditions raises serious concerns about the medicinal value of the jewel orchid-derived products.  Consequently, incorrect utilization will reduce effectiveness or harm the health of the patient due to the variation in medicinal compounds and application among different jewel orchid members (Du et al., 2008; Poobathy et al., 2018; Trinh et al., 2020).

Based on the rapid development of DNA sequencing technology, the application of a short standard DNA sequence, so-called DNA barcode, to identify target plant species has been used intensively. This method possesses several advantages in the comparison to traditional methods such as high repeatability and stability, applicability to any developmental stages of organism and ability to identify target organism being destroyed or processed (Barcaccia et al., 2016). Several barcode loci have been tried to investigate DNA barcode candidates for plant identification (Hollingsworth et al. 2011; Kress, 2017).

The species identification capacity of rbcL locus was higher than that of matK and ITS on mangrove plants (Wu et al., 2019). Nevertheless, another study in China at same time showed the inferior of rbcL to ITS and matK on Astragalus spp. (Zhang and Jiang, 2019). Therefore, the present study focused on evaluate the identification ability of ITS, matK and rbcL loci in jewel orchid plants by using DNA sequences available on the National Center for Biotechnology Information (NCBI). The obtained results could provide information to escalate the effectiveness in classifying and identifying different jewel orchid population at species and genus level.

The sequences of ITS, matK and rbcL loci belonging to different jewel orchid species were download from nucleotide database of NCBI (URL: http: //www.ncbi.nlm.nih.gov) by using corresponding Latin name and barcode locus as keywords. The sequences were selected for analysis based on criteria proposed by Suesatpanit and colleagues (1) sequences are not ‘unverified’ without a species name (2) contain <3% ambiguous base ‘N’ (Suesatpanit et al. 2017) and presented in Table 1.

Sequences were converted into FASTA format and subjected to Multiple Sequence Alignment using Clustal W by using MEGA 6 software (Tamura et al. 2013). This software was also applied to calculate the evolutionary divergence for each data set and pattern of nucleotide substitution. For phylogenetic analysis we used Neighbor-Joining tree method with 1000 bootstrap and presented as circular cladograms (Ho and Nguyen, 2020). In order to estimate species resolution for a given barcode locus, the species/genus were resolved if conspecific individuals are grouped into one monophyletic branch in the phylogenetic tree with bootstrap support greater than 50% (Zhang et al., 2019). Contrarily, if separated in paraphyletic branches such species and genus are considered as identification failure (Sikdar et al. 2018).

Sequence retrieve: By using keyword “species names +ITS/matK/rbcL” to find the sequences deposited in NCBI GenBank, after removal of unrealizable sequences as described by Suesatpanit and colleagues (2017), total of 124 sequences were obtained, there are 63, 35 and 26 DNA sequences of ITS, matK and matK regions, respectively (Table 1).

Table 1. List of jewel orchids and number of retrieved sequences used in this study

Estimation of sequence divergence: The variation within and between species based on ITS, matK, and rbcL regions were calculated and the data representing by evolutionary divergence (p distance value) are shown in Table 2. Based on p distance, it suggests that there is the large variability of three regions within a specific species of jewel orchid. Anoectochilus setaceus show highest variation divergence in ITS locus (0.044), Anoectochilus lylei show highest at matK (0.014) and Ludisia discolor at rbcL (0.004).

(The presence of n/c in the results denotes cases in which it was not possible to estimate evolutionary distances. Note: SE: standard error; NA: not available).

Table 3. Estimates of Evolutionary Divergence over Sequence Pairs between Groups for ITS

Table 4. Estimates of Evolutionary Divergence over Sequence Pairs between Groups for matK

Table 5. Estimates of Evolutionary Divergence over Sequence Pairs between Groups for rbcL

Table 6. Maximum Composite Likelihood Estimate of the Pattern of Nucleotide Substitution (in percentage)

Although rbcL locus was reported as a good marker to differentiate species in Prunus genus (Singh et al. 2016), our data show that this is the poorest among three studied loci in term of discrimination power in which only Macodes petola and Goodyera pubescens are completely resolved (Figure 3). One of main reason of low discrimination power of this locus could be due to limited number of examined sequences, Sikdar and colleagues proposed to increase sequence number to enhance the discrimination power (Sikdar et al. 2018). 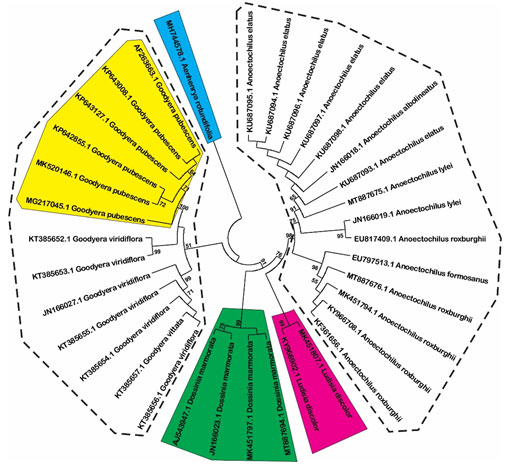 Even both Anoectochilus and Goodyera genus are rich in several medicinal compounds, the former is considered better than the later since some corresponding compounds extracted from Goodyera is less effective than those from Anoectochilus species (Du et al., 2008). Furthermore, Anoectochilus species are traditionally used for treating chest and abdominal pains, diabetes, nephritis, fever, hypertension, impotence, liver and spleen disorder, and pleurodynia whereas, L. discolor is used to reduce coughs and strengthening weak lungs (Poobathy et al., 2018). Thus, the high discrimination power of matK locus is highly valuable to identify, utilize and develop these two species for specific medicinal purposes.

Figure 2: Neighbor-joining tree with 1000 bootstrap replicated based on ITS sequences (Shaded areas and dot cycles present the completely resolved species and genus, respectively). 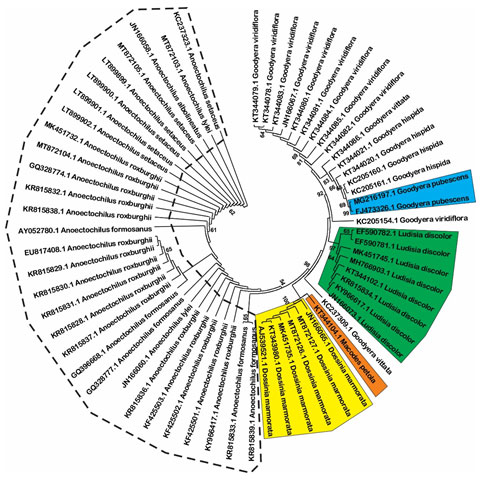 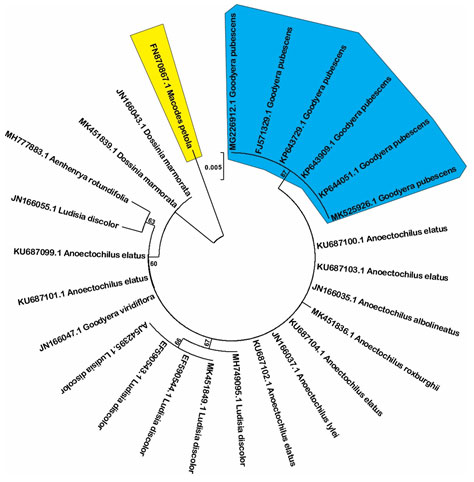 The usefulness of three main DNA barcode loci in classify different jewel orchid plants is confirmed by In silico analysis. The obtained results suggest that the discrimination capacity of ITS, matK and rbcL DNA barcode loci are variable among different species of jewel orchid plants, in which matK and ITS loci reveal more potential for genetic classification at genus and species level of this herbal plants. In the future, higher sequence number should be included in the analysis to give more reliable result. The information from this study could be useful in conservation and development programs of jewel orchid plants.

Conflict of Interests: The author has no conflict of interest.

Huynh HD, Nguyen TG, Duong HX et al. (2019). Using some dna barcode for the genetic analysis and identifying some species of Anoectochilus spp. Can Tho University journal of Science 55(1): 14-23.