Citric acid can be derived from natural sources (e.g., oranges, berries, limes, lemons, tangerines, and grapes) and synthetic sources (e.g., chemical reaction and microbial fermentation).  Microorganisms can consume cheap raw materials and convert them into a value-added product such as organic acid. Generated wastewaters have many organic compounds which are utilized for production of various fermented products. Recently, spent wash generated from alcohol-producing industries is utilized for citric acid production. Citric acid has several extremely variable features and is purely a biological based product. So, it can be applied risk-free in the food and pharmaceutical industries. The benefit and versality of citric acid increase its demand in daily life consumption all over world (Sun et al. 2017; Aboyeji et al. 2020).

Increase in citric acid production is a major thing to overcome the demand in industries. Many techniques such as random mutations and selections are based on working hypotheses that are available for strain improvement. Selection of mutant strains is possible by the techniques of single-colony (single-spore) isolation and stable long-term maintenance of isolated strains. These are the principal ones that are generally employed on the vast scale. Various mutant strains of Aspergillus sp. are obtained and used for commercial production of citric acid. For this, mutagenesis is carried out by physical and chemical mutagens. Physical mutagens are UV and gamma radiation whereas chemical mutagens are ethyl methane sulfonate, N-Methyl-N-Nitrosoguanidine, ethidium bromide and acridine orange (Prasad et al. 2014; Alhadithy et al. 2020).

The Plackett-Burman design (PBD) is a statistical method used for screening the factors (media components) and finds the most significant influence on factors in a minimum number of experiments. After screening for the significant media components by the PBD method, the statistically based optimization using central composite design (CCD) and Box Behnken Design (BBD) was carried out under response surface methodology (RSM). The benefits of this method were the decreased number of experiments, time, and material resources. Furthermore, the analysis performed on the results can be easily realized with reduced experimental errors (Ayeni et al. 2019).

In the present investigation, efforts were made for raising potent of Aspergillus fumigatus PN12, a recently isolated fungal strain, for citric acid production by random mutagenesis using UV-irradiation. For further cost reduction, the ability of the selected mutagenized strain to utilize spent wash as carbon source was also examined. The aim of study was, production of citric acid using RSM with BBD by investigating the effects of parameters as well as citric acid fermentation in the optimized medium carried out in a 3 L bio fermenter.

For the processing of raw material, chemical and medium component, distillery spent wash was obtained from sugar industry, Madhi, Surat, Gujarat, India. It was collected in an airtight sterile container and stored in refrigerator for the use of whole experiments. Spent wash contain high amount of sugars which can be utilized to convert valuable fermented products by fermentation process. Pretreatment of spent wash conducted in suspended growth reactor by physicochemical parameters. PDA medium, other mineral salt and nitrogen sources were purchased from Himedia laboratory, and S. D. fine (India). Citric acid enzymes reagents were supplied by Himedia Laboratory (India). All chemicals were of the highest purity and of an analytical grade.

For the isolation of fungal culture and gene sequencing, mutant strain Aspergillus fumigatus PN12 was isolated and identified as described in our previous published article (Aghera and Bhatt 2019). For mutagenesis, germicidal lamp (20 W) was used for UV mutation of Aspergillus fumigatus PN12 (˜1 × 10-6 spores/mL). UV exposure was operated at a distance of 20 cm with short wavelength 254 nm. Treated spore were collected in sterile petri plate and it was exposed to UV light at the time interval of 3 min for 3-21 min. After UV irradiation to spores, 100-fold serial dilutions of potentially mutation-induced spores were plated to give 40 colonies or less per plate (Adeoye et al. 2015; Aghera and Bhatt 2019).

To begin the mutation process for Aspergillus fumigatus PN12, it was first subjected to UV radiation to develop its hyper-producing mutants for enhanced citric acid production. Then, in a dark room, the spore dilutions (0.1 mL) from UV treated mutants were spread onto PDA media containing 2% triton X-100 as colony restrictor. Untreated spores; also plated as control. All processes were carried out in strict aseptic conditions in laminar airflow. The selected mutants were cultured in submerged fermentation (SMF). Citric acid production process using a mutant was then optimized to enhance citric acid production by the mutant in SMF (Javed et al. 2010).

Each of the independent variables was studied at three different levels as per BBD in four variables with a total of 28 experiments (Table 2). Citric acid production corresponding to the combined effects of four components were studied in their specified ranges (Table 1). The parameters were chosen and their levels were based on preliminary optimization experiments carried out in our laboratory and as discussed above. The design was planned for performing an experiment in a laboratory using Design-Expert version 11.0 (Stat-Ease, Inc.) software (Aghera and Bhatt 2019).

UV Mutagenesis: After UV mutagenesis of PN12 with different time intervals, the kill/survival curve was prepared and the time of exposure giving 0.04 × 103 CFU/mL was selected (Figure 1). Mutant strain PN12 survived of growth still 21 min with exposed of UV light (Figure 2). Colonies that changed their color to blackish brown were picked from this plate and grown on slants for making a further selection. On the other hand, it was not showed results in chemical mutagenesis. Mutant colonies were changed their color greenish to brown color and user for further investigation (Abirami et al. 2018). 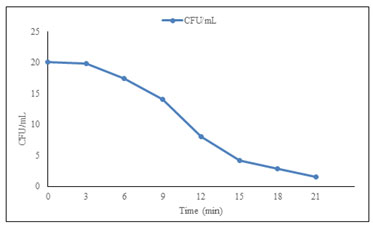 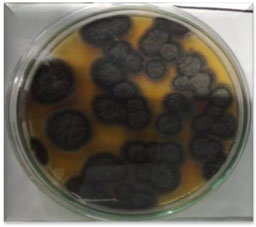 Our observations were in accordance with Abirami et al. (2018) said that the fermentation process was carried out by using three types of inoculum i.e., Aspergillus niger spores and mycelium and also mutated Aspergillus niger mycelium for citric acid production. The highest yield of citric acid (10g/100mL) was observed in the mutated mycelium with compared to the spores and normal mycelium (Javed et al. 2010; Abirami et al. 2018).

Optimization of environmental and nutritional parameters for citric acid production: Effect of pH on citric acid production: The hydrogen ion concentration influences citric acid production, therefore in this optimization study, the initial pH of the PMWW was varied from 2 to 7 (Figure 3). The production of citric acid was found to be maximum (17.52 ± 0.22 g/L), when the pH of the medium was maintained at 6.0. However, it was also noted that the medium amended with pH 6 consumed reducing sugar, (56 ± 0.8 %), produced dry biomass (10.74 ± 0.9 g/L/h), and maximum productivity (111.87 ± 0.3 mg/L/h) within 96 h. Mutant Aspergillus fumigatus PN12 exhibited good production in a narrow pH range from 5.0 to 6.0 with marked less productivity at pH up to 7.0. 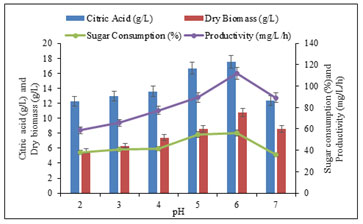 As the temperature was increased from 25 to 30 °C there was a gradual increase in the enzyme activity. However, with further up to 30 °C temperature there was a decrease in citric acid production (Figure 4). This study was supported by Ali et al. (2015) used arginine as a nutritional ingredient for citric acid production by A. ornatus at 30°C. In contrast, Xu et al. (2015) investigate the best production of citric acid at 37.5 °C from cassava and corn powder by A. niger (Emeka et al. 2012; Xu et al. 2015). 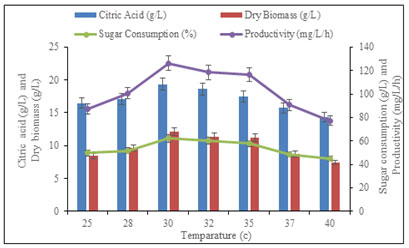 Further increase in (NH4)2SO4 concentration in PMWW up to 0.1 g/L had no major effect on the production of citric acid. Based on the result observed, the citric acid production was significantly affected through fungal culture connected to the above or lower at 0.1 g/L of ammonium sulphate (Figure 5). The obtained results and findings are also similar to Max et al. (2010) they detected that lab-scale examination was supplemented by ammonia salt which was responsible for the decline in pH which gave a favorable fermentation process. Shankar et al. (2016) also reported NH4Cl as the best nitrogen source for enhancing the citric acid production using A. niger (Max et al. 2010; Shankar et al. 2016). 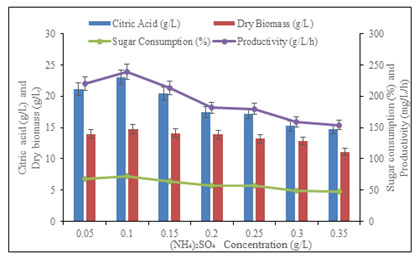 However, we reached to the conclusion that the citric acid production was drastically changed by increased or decreased 0.1 g/L concentration of KH2PO4 (Figure 6). The observed results were similar to those previously carried out by Qurban et al. (2017) their work recommended that the restriction of phosphate might be absolutely affected on production of citric acid, while the high presence of phosphate could reduction in fixation of CO2 and responsible for the production of sugar acids (Qurban et al. 2017; Abirami et al. 2018). 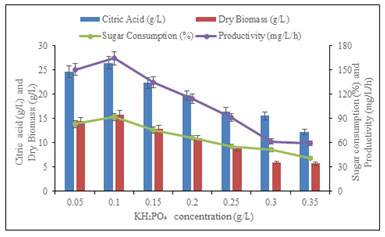 The results of ANOVA are shown in (Table 3). The fitted second-order response surface model specified by Equation (1) for citric acid production in coded process variables was:

The statistical analysis of experimental results suggested that the model was highly significant (p = < 0.0001) as shown in (Table 3). Fisher’s F’ and Student’s t-test were used for the testing of the analysis of the model. For the determination of the significance of the regression coefficient of variables, Student’s t-test was applied. p-values less than 0.0500 indicate model terms are significant. In this case pH, (NH4)2SO4, KH2PO4, temperature and temperature, pH and pH, (NH4)2SO4, and (NH4)2SO4, KH2PO4, and KH2PO4 were significant model terms.

A p-value of less than 0.05 indicated the test parameter was significant. The interaction effect among four variables was highly significant with p = < 0.0001. The model was significant, it was implied by Model F-value of 10.96. According to interaction effects were highly significant with p values less than 0.05. The expected R squared estimation of 0.358 was practically close with the adjusted R squared estimation of 0.484, which determined that the BBD configuration was in great concurrence with the observed and expected reaction (Abirami et al. 2018).

Interpretation of the model: The Figure representation provides a method to visualize the relationship between the experimental and response levels of each four variables and the type of interactions between test variables. (Figure 7) illustrates the variation in the citric acid production as a function of simultaneous change in the temperature (A, in Figure 7 indicated as A: temperature) and (B: pH in Figure 7 indicated as B: pH) whereas, temperature and pH were kept at the middle level of the range (at ‘0’ value). 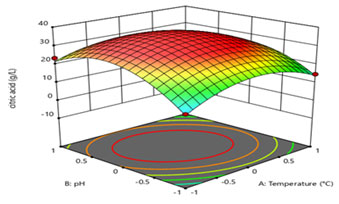 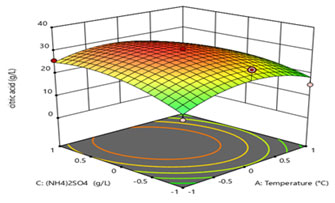 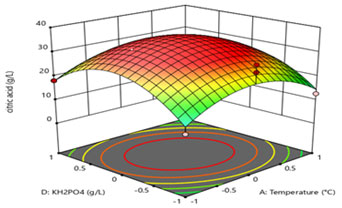 Enzymatic study: To determine the biological perceptive for guideline of citric acid synthesis, Specific exercises of aconitase, NAD+ isocitrate dehydrogenase and NADP+ isocitrate dehydrogenase were concentrated from UV treated Aspergillus fumigatus PN12 regarding citric acid synthesis. The acceptance of different compounds during the citrus extract beneficial system likewise strengthens the active job of microorganisms in the produced cycle. As introduced in (Table 3.5) specific action of aconitase in high citric acid producing strains of A. fumigatus during the evolution time of 96 h.

Table 4: The Effect on specific activities (U/mg protein) in A. fumigatus

The findings of the present study suggests that the citric acid is an industrially important molecule which play an important role in preprocessing, bioremediation, and brewing industries. It is a natural preservative and is also used to add an acidic (sour) taste to food and soft drinks. This study investigated on an environmentally friendly and economic approach to produce citric acid from wastewater. Mutant strain was the survive and of growth was observed till 21 min with exposer of UV. The process optimization through the statistical approach resulted in a 1.16-fold enhancement in citric acid production as compared to that of the OFAT conditions. Thus, produced citric acid by the collective action of citrate formation enzymes where A. Fumigatus PN12 playing their significant role in citric acid fermentation.

This study was financially supported by the Gujarat Biotechnology Research Center (GBRC). Authors thank the institute for the culture identification and Dr Jyoti Vivecha for the statistical study.