Eslam A. Header1 and Osama A. Shaikhomar*2

The aim of this study was to investigate the effects of daily oral feeding 8% and 15% of powdered leaves of Murraya koenigii leaves (MKL) (commonly knoun as curry) and Brassica juncea seeds (BJS) (commonly knoun as mustard) for 45 days on serum glucose concentration, serum lipids, liver and kidney functions in diabetic rats. A total of 36 adult male albino rats (Sprague Dawley strain) weighting 159±2.4g each were used in this investigation. Non- diabetic control (-) (6 rats) were fed basal diet ,while diabetic control (+) main group (30) rats divided into five groups after injected with alloxan (150mg/kg), at the end of the experiment, weight gain was calculated. Liver of each rat were removed rapidly then weighted separately.

The World Health Organization (WHO) projected that 80% of the population relies on traditional medicine, which was elucidated by the 19.4 billion USD global revenue for herbal remedies in 2010 (Ujowundu et al., 2010). Moreover, the demand for traditional medicinal plants is increasing; for instance, the market for medicinal plants is expanding at an annual rate of 20% in India. Likewise, in China, 30% to 50% of the total medicinal consumption and around 90% of the German population uses natural remedies for certain health issues (Kang et al., 2018; Phumthum and Balslev, 2018; Raghu, 2020).

Though curry leave is an ancient crop native to India, its nutritive and medicinal values are not enough known yet (Raghu, 2020). The medicinal properties of M. koenigii have been recorded to several chemical constituents of different carbazole alkaloids and other metabolites, like terpenoids, flavonoids, phenolics, carbohydrates, carotenoids, vitamins, and nicotinic acid from different parts of the M. koenigii tree (Balakrishnan et al., 2020).

In recent years, limited studies have been conducted for evaluating the pharmacological and medicinal efficacy of M. koenigii in promoting health benefits and curing disease. M. koenigii has numerous disease remedial activities, for instance, different parts of the plant, such as the leaves, roots, and bark, can be prepared as tonics for inducing digestion and flatulence or as antiemetics (Mandal et al., 2010; Adebajo et al., 2006). The leaves and roots are also useful in managing blood disorders (Sim and Teh., 2011; Dar et al., 2017; Zang et al., 2017; Balakrishnan et al., 2018; Balakrishnan et al., 2020).

These Alpha-glucosidase inhibitors are widely used in the treatment of patients with type 2 diabetes. In most developing countries, medicinal plants play a helpful role in managing diabetes mellitus due to their cost effectiveness. Diabetes mellitus, a metabolic disorder, is becoming a serious threat to human health. During the past few years, many phytochemicals responsible for anti-diabetic effects have been isolated from plants. Alkaloids present in the leaves of M. koenigii have been explored and reported to have inhibitory effects on the aldose reductase enzyme, glucose utilization, and other enzyme systems for extending anti-diabetic effects (Patel et al., 2012).

Previous reports have demonstrated that the leaves, roots, and bark of the plant are rich sources of carbazole alkaloids, which produce potent biological activities and pharmacological effects. The present study provides insight into the major components of M. koenigii (leaves and seed) and their pharmacological activities in the management of serum glucose concentration, serum lipids, and liver functions in alloxan-induced diabetic rats.

Animals: A total of 36 adult male albino rats (Sprague Dawley strain) were used in the investigation. Animals were obtained from Laboratory Animal Centre, Department of Biochemistry, Faculty of Medicine, Umm Al-Qura University, Makkah, KSA. Each rat was housed in a special cage under controlled condition.

All rats were fed for 7 days on the control diet before the beginning of the experiment. Rats were weighed after 7 days separately then were weighed once a week for 6 weeks. The diet was presented to rats in special covered cups to avoid food loss, water was provided. At the end of the experiment rat were killed and organs weight was recorded.

Blood sampling: At the end of the experiment, rats were fasted overnight and anesthetized with chloroform. Blood samples were collected in clean dry centrifuge tubes from hepatic portal vein. Blood was centrifuged for 10 minutes at 3000 rpm to separate serum, which was kept in tubes at– 18°C until analysis. Organs were taken, washed with saline solution (10% Nacl) and dried with filter paper, then weighed and kept in freezer until analysis.

Histopathological examination of some internal organs: Specimens from liver were collected from rats of all experimental groups at the end of the experimental period, fixed in 10% neutral buffered formalin (pH=7.0), dehydrated in ethyl alcohol, then cleared in xylol and embedded in paraffin; 4-6 microns thickness sections prepared and stained with heamtoxylin and eosin for examining both for and glandular parts of the stomach (Bancroft and Gamble, 2008). 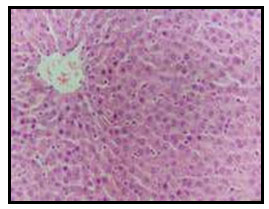 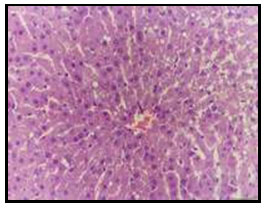 Figure 3: Liver of diabetic rat treated with 7% curry showing vacuolation
of hepatocytes around the central vein (H and E X 200). 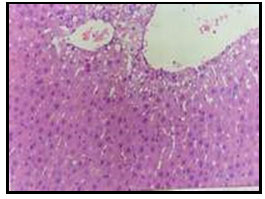 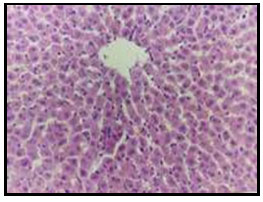 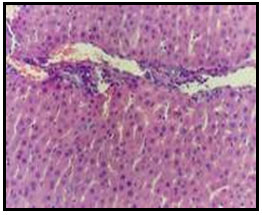 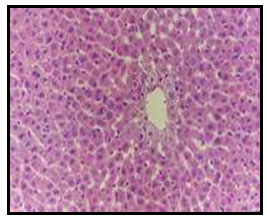 The current study was performed to evaluate the hypoglycemic effect of Murraya koenigii leaves and B. juncea seeds in alloxan induced diabetic rats. Diabetes is considered one of the major causes of morbidity and mortality affecting the elder and middle-aged population (Guariguata et al., 2014). The long-term use of present oral hypoglycemic tablets or insulin is associated with the development of resistance and various side effects.

Alloxan causes partial destruction of pancreatic β-cells, which leads to reduced levels of insulin and consequently resulting into hyperglycemia (Szkudelski, 2001; Lenzen, 2008). In our results, fasting serum glucose (mg/dl) for diabetic rats fed on curry leaves and mustard seeds for 45 days showed a significant decline. The hypoglycemic activity of curry leaves and mustard seeds could be due to the presence of carbazole alkaloids, which possess alpha-glucosidase inhibitory property (Duraisamy et al., 2012).

Alpha-glucosidases are enzymes in the digestive tract that hydrolyze carbohydrates into glucose. One strategy that has been developed to treat type-2 diabetes is inhibition of the activity of alpha-glucosidases using synthetic drugs or natural drug candidates for the treatment of type-2 diabetes mellitus. Other possible mechanism of action of curry-leave-treated group could be potentiating insulin secretion from β cells of islets, which leads to reduced blood glucose levels (Vinuthan et al., 2004; Samuel et al., 2020).

Moreover, both spices resulted in reduction of serum total cholesterol and LDLc + VLDLc accompanied with an increase in the HDLc (Virdi et al., 2003). Administration of the extracts significantly decreased cholesterol level to near normalcy and therefore may reduce the risk of diabetes-associated cardiovascular diseases.In the present study, the B. juncea seed extract augmented the serum insulin levels suggesting an improved state of availability of serum insulin to control blood sugar.

In addition, the present study showed that insulin serum augmenting effect was recorded highest at the dose of 7% suggesting that the serum insulin effect of the seed extract is dose dependent. This might be due to the inability of the β cells to recoup from the alloxan effect in these (Iftikhar et al., 2020).

Our data showed that serum AST and ALT levels declined significantly (p< 0.05) in all treated groups fed on 7% and 15% curry and mustard compared with diabetic positive control. Damage to the structural integrity of the liver is reflected by an increase in the activity of this enzyme in the serum, probably because of leakage from altered cell membrane structure (Akanji et al., 1993; Rahman et al., 2001; Iftikhar et al., 2020).

Therefore, increase ALP in serum of the untreated diabetic rats confirms damage to the plasma membrane. The combination treatment attenuated the elevated activity of ALP enzyme in diabetic rats as compared with the normal controls. Our results illustrated that B. juncea seeds consumption significantly lowered the risk of atherosclerosis by bringing fall in concentration of plasma total cholesterol, LDL cholesterol as well as an improvement in HDL-cholesterol levels that is in full agreement with other studies described by (Khan et al., 1996; Rusdi et al., 2021).

This lipid lowering property of B. juncea may be due to its emulsification properties that were contained in its water-soluble portion of proteins as reported by (Cui, 1997). Reduced plasma cholesterol concentration is also affected by improved function of LDL receptor, which accelerates LDL uptake from plasma (Ness et al., 1996). These findings are in favour of former studies, showing that plant has cholesterol reducing capacity (O’Brien and Reiser, 1979).

Histopathological examination of liver of control, untreated rat revealed the normal histology of hepatic lobule, however liver of diabetic rat showed vacuolar degeneration of hepatocytes as well as focal hepatic haemorrhage especially around the central vein. Examined liver of diabetic rat treated with 5% mustard showed portal infiltration with few leucocytic cells thus indicating that the extract of leaves and seeds exhibits inhibitory effect against hepatotoxicity. These results are in conformity with the previous findings (Bhatt et al., 2020; Hend et al., 2021).

From the current study, it is concluded that M. koenigii leaves and B. juncea seeds were found to show antihyperglycemic and hypolipedimic activity. Hence, this compound could be used as an oral hypoglycemic agent in diabetes. However further studies need to be done to confirm this activity in animal models as well as human trials.

The consumption of the leave and seeds may be potentially beneficial against atherogenesis hence protective against cardiovascular disease as it possesses quality of lowering the plasma cholesterol, triglycerides, LDL-C and improving HDLC. Vacuolation of hepatocytes and portal infiltration in liver treated with the leave and seed extract respectively further indicates a need to evaluate the isolated phytochemicals from of the plant for the benefit of mankind. It can be achieved by using scientific experimental animal models and clinical trials to get the information about their action mechanism on the molecular level.

Akanji M.A., O.A. Olagoke and O.B. Oloyede (1993). Effect of chronic consumption of metabisulphite on the integrity of the rat kidney cellular system. Toxicology. 81: 173-9.

NIHP (1987). Detection, Evaluation and Treatment of High Cholesterol in Adults, National Institute of Health Publication No. 88-292.

Rusdi B., Yuliawati, K.M., Khairinisa, M.A. (2021). Comparison on the prebiotic polysaccharides and oligosaccharides from plant studies in Indonesia and outside of Indonesia (Article). Journal of Engineering Science and Technology, 16 (3): 2260-2272.