Stress can initiate by many factors incorporated in the daily life such as long-term health issues, immune system suppression and obesity. Free radicals as well as endogenous antioxidants are in balance as part of body’s natural functioning. Oxidative stress occurs when endogenous defence system not capable to maintain the balance, therefore natural antioxidant was in-need to help the endogenous antioxidant in scavenging the excess of free radicals. Punicalagin is a natural antioxidant compound that extracted from pomegranate husk. Punicalagin affect the activities of endogenous antioxidant enzymes which was investigated by measuring the level of catalase, superoxide dismutase (SOD), glutathione peroxidase and reductase of Caco-2 cells under stress conditions. Caco-2 cells were exposed to 3 mMtert-butyl hydroperoxide (T-BOOH) for 2 hours to initiate oxidative stress when pretreated with 5 and 10 µM punicalagin for 24 hours. Both doses (5 µM and 10 µM) of punicalagin significantly elevated the level of catalase (15.05 U/ml; p <0.05 and 20.95 U/ml; p < 0.001, respectively) compared to cells treated with only T-BOOH (11.79). On the other hand, punicalagin had no effect SOD, glutathione peroxidase and glutathione reductase. In conclusion, under stress conditions punicalagin significantly enhanced endogenous antioxidant enzymes of Caco-2 cells.

Free radicals in living cells are naturally produced as a result of cell metabolism and detoxification process (Halliwel and Gutteridge., 2015). Oxidative stress occurs as consequences of imbalance between antioxidant capacity in biological system and the excess of free radicals initiated in the system. Excessive radical species production causes cell injury by reacting with lipid membrane, cell proteins and DNA (Ahmad et al., 2019). Attacking of biological molecules with excessive radicals leading to pathogenesis and many diseases that include cancers and aging disease ((Valko et al., 2004, Liguori et al., 2018).

Both of catalase and glutathione peroxidase are protecting cells from oxidative damage by catalysing the decomposition of harmful hydrogen peroxide (H2O2) to safe products as water and oxygen. Moreover, Glutathione reductase is one of the important antioxidant defence enzymes at cellular levelas it is responsible for maintaining the reducing environment of the cell by optimizing the concentration level of reduced glutathione (GSH) in cellular system (Aguilar et al., 2016).Under certain conditions, excess reactive species formation overwhelms the oxidant/antioxidant balance despite the presence of cellular antioxidant defense system (Georgieva et al., 2017).

One of the plant polyphenol naturaly rich with antioxidant compounds is pomegranatefruit.The high antioxidant properties of pomegranate are due to the presence of punicalagin isomers  which form when both gallic and ellagic acid link to glucose molecules,  and hydrolysable tannins ( Gil et al., 2000). Punicalagin is a yellowwater-soluble compound that is mainly present in the pomegranate husk. Omar et al., (2016) stated that punicalagin from pomegranate has regulating effect on total glutathione in Caco-2 cell stressed by T-BOOH. The current study  has been carried out  on human intestinal Caco-2 cell line which displays morphological and physiological characteristics that are similar to intestinal epithelial cells when differentiated (Meunier et al., 1995).

T-BOOH was also used to generate oxidative stress that results in cell injury (Lashpina et al., 2005). Once T-BOOH gets penetrated in the cell membrane and  is easily decomposed to produce alkoxyl and peroxyl radicals which subsequently continue to generate reactive species (Kim et al., 2013). Prevention or delaying the adverse effect of excess ROS on cells is important to protect cellular membrane and its content (Cianfruglia et al., 2020). Therefore, the aim of this study was to investigate the effect of punicalaginas a natural plant derived antioxidant on the activity of catalase, SOD, glutathione peroxidase and glutathione reductase using stressed Caco-2 cells as an epithelial model.

Cell culture and treatment:Human colon epithelial cells (Caco-2) was obtained from European Collection of Cell Cultures (ECACC, UK). Cells were stressed for 2 hours with 3 mM tert-butyl hydroperoxide (T-BOOH) and treated with 5 and 10 µM Punicalagin according to (Omar et al., 2016). 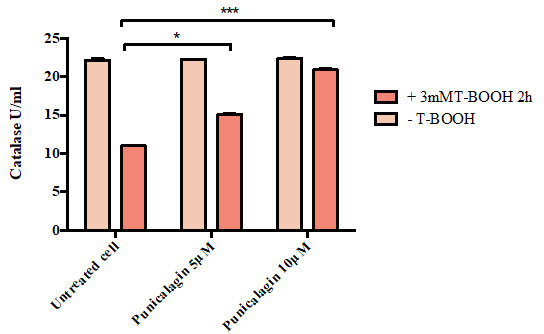 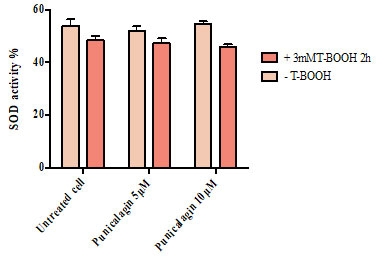 Figure 3: Effect of Punicalagin on the amount of glutathione peroxidase in Caco-2 cells. Data correspond to the means ± SD of three independent experiments. ANOVA was performed in Graphpad Prism version 6.0. followed by Bonferroni’s multiple comparisons test. 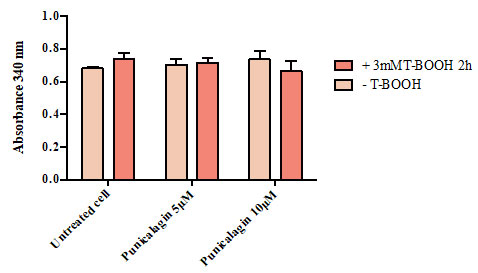 Figure 4: Effect of Punicalagin on the amount of glutathione reductase in Caco-2 cells. Data correspond to the means ± SD of three independent experiments. ANOVA was performed in Graphpad Prism version 6.0. followed by Bonferroni’s multiple comparisons test. 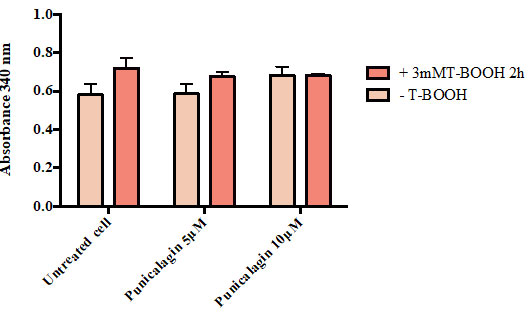 These findings led to further examination of other cellular antioxidant enzymes as catalase, SOD, glutathione peroxidase and glutathione reductase in Caco-2 cells using the same conditions. In a healthy system, cellular antioxidative enzymes can protect cells either their membranes or their cellular content by scavenging free radicals. However, under certain conditions excess radical formation overwhelms the antioxidant/prooxidant balance and then weakens the antioxidant defence system (Cimen, 2008).Catalase is one of the main endogenous antioxidant enzymes that responsible for the dismutation of hydrogen peroxide to safe products such as water and oxygen (Aguilar et al., 2016).

In this study, cells treated with either 5 or 10 µM punicalagin prior to oxidative induction, significantly elevated catalase level to (15.05 U/ml, p<0.05 and 20.98 U/ml, p< 0.001; respectively) as compared with cells treated with T-BOOH alone. This result illustrated the effect of punicalagin on enhancing the activity of Catalase under oxidative stress. In contrast, there was no significant difference in SOD activity between pre-treated stressed cells and untreated stressed cells.Catalase and SOD results might be explained by the effect of stressed condition on the activity of each enzyme. Researcher suggested that 5×10-2 mM T-BOOH organic peroxides can activate catalase enzyme while inactivate SOD, although both enzymes undergo the same stressed condition (Pigeolet et al., 1990). Many studies confirmed that some natural antioxidants either derived from plant or animal source able to enhance the endogenous defence system by increase the enzyme activity level or its gene expression.

Recently Talaei et al., (2020) have  suggested that quercetin either alone or with exercise significantly elevated the level of catalase in the heart tissue of rats stressed with 15 mg/kg Azoxymethane in comparison with saline group (p< 0.0001). Another study found significant increase in the expression of catalase and SOD genes was found in HepG2 cells treated with peptide isolated camel milk (Homayouni-Tabrizi et al., 2017). Maalej et al. (2017) suggested that ethanolic olive fruit extract and its phenolic compound exhibited hepatic and renal protection against the toxicity induced by a synthetic pyrethroid (deltamethrin) on Wistar rats. This protection was highlighted by improving the activities of catalase and SOD. Another study revealed that ginger extract (Zingiber officinale) has a possible chemoprotective effect by enhancing the activity of catalase, SOD and glutathione peroxidase in HepG2 cell line (Seyidoglu and Aydin 2020).

In the current study, although the significant effect of punicalagin on catalase activity, there is no significant difference between the glutathione peroxidase level between pre-treated stressed cells and untreated one. This outcome might be affected by the dose of T-BOOH that used in the current study and/ or incubation time that used for stress. Pigeolet et al., (990) stated that 5×10-2 mM T-BOOH inactivated glutathione peroxidase by 50% when incubated for 11 minutes at 37o C.

Glutathione reductase enzyme is responsible for converting GSSG to GSH which is an important molecule in resisting oxidation stress (Duthie et al., 2000). Under oxidative stress, elevation of peroxideslevel leads to a shift in thiol redox status which defined by a severe reduction in the reduced form of glutathione (GSH) and rise in the level of the oxidised form (GSSG).

Although Omar et al., 2016 stated that punicalagin as a radical scavenger could maintain the GSH level against oxidative stress occur due to T-BOOH in caco-2 cells, in the current study punicalagin did not exhibit any effect on glutathione reductase level and there was no significant difference between untreated stressed cells and treated one. This result can also be linked to the dose of T-BOOH and its incubation time that used while stressing caco-2 cell.

Organic peroxide might inactivate the enzyme activity as stated previously by Pigeolet et al. (1990). Endogenous antioxidants operate together under one system that complements its main constituents to maintain the redox balance in the body. Regulation the level of reactive oxygen species is the target of researcher but not diminished them completely as they may lead to degenerative diseases (Lobo et al., 2010). According to the current research, it is highly likely that punicalagin can enhance the endogenous antioxidant enzyme system by activating catalase enzyme which able to scavenge the excess hydrogen peroxide and hence protect cellular system from damage.

Punicalagin enhanced the activity of endogenous antioxidative enzymes causing protective effect to the oxidatively stressed Caco-2 cells. The protective effect of punicalagin was demonstrated by the significant elevation of Catalase level when the stressed cells either treated with 5 µM punicalagin (15.05 U/ml; p <0.05) or with 10 µM punicalagin (20.95 U/ml; p < 0.001) compared to cells treated with T-BOOH alone. Punicalagin has no effect on SOD, glutathione peroxidase and glutathione reductase levels. Highlighting the effect of Punicalagin on the activity of endogenous antioxidant enzymes in addition to previous findings on its antioxidant activity that conducted by the same researcher (Omar et al., 2016) might elucidate the actual mechanism of its protective action. These novel findings may offer punicalagin potential applications in the nutraceutical market.

Breinholt, V. (1999). Desirable versus harmful levels of intake of flavonoids and phenolic acids. In Natural antioxidants and anticarcinogens in nutrition, health and disease (pp. 93-105). Woodhead Publishing.

Talaei, B., Panji, M., Robati, F.N. and Tezerji, S. (2020). Effect of quercetin and intermittent and continuous exercise on catalase, superoxide dismutase, and malondialdehyde in the heart of rats with colon cancer. Basic and Clinical Cancer Research, 12(1), pp.34-41.