These metabolites are well known for their pharmacological applications such as antibacterial, anti-inflammatory, antioxidant, antirheumatic, anti-poisonous, antimalarial, anticancer, antimalarial, antiallergic, antiarthritic and antidepressant etc. Before the identification of chemical constituents, genus Eremostachys was used by few countries since ancient viz. by China, Iran, India, Pakistan, Tajakistan and few middle and south Asian countries etc. This genus has been used by people of these region since ancient as analgesic, anti-inflammatory, wound healing, ant-insecticidal, antiparasitic, antiallergic, liver care, joint pain, arthritis, antioxidant, antibacterial, antidepressant, antimalarial, perfumery, detergent, soap, beauty products. In India, E. superba has been used as a food for cattle to increase milk production. In the present review, the important traditional uses of some important species of the genus Eremostachys have been briefly discussed due to their availability and affordability. The number of medicinal and pharmacological applications of the plant genus Eremostachys are also summarized in the paper.

Genus Eremostachys, known as desert rod, belongs to the family Lamiaceae. Presently, around 80 species of this genus have been documented, which are mainly distributed in Eastern Europe, Central and Western Asia and the Middle East (Harley et al. 2004). However, more than 45 species are distributed only in Azerbaijan, Armenia, Turkey, Iran, and Turkmenistan (Azizian et al. 1982; Hedge et al. 1986). It is an Irano-Turanian genus and majorly distributed in the desert mountains of the Iranica area especially covering Central Asia. However; few species viz. E. laciniata, E. molucelloides and E. vicaryi expanded their distribution towards Turkey, Pakistan and Afghanistan etc.

From India point of view, there is only one species E. superba Royale ex Benth., of genus Eremostachys that was identified as a critically endangered plant species due to lack of proper knowledge, grazing by herbivores, plucking of the flowers by travelers, and overexploitation by local people (Verma et al. 2003). It was described from Mohand and Khree Pass (Siwaliks of Saharanpur) by Royle in 1839, which was a very sophisticated and beautiful plant found in Uttarakhand, Himachal Pradesh, Jammu & Kashmir province of India (Sharma et al. 1981; Jain et al. 1984; Panwar et al. 2015; Hariri et al. 2021).

Traditionally, E. laciniata is used in various illnesses viz, to treat allergies, headache and various liver diseases, asthma, cough & cold, alleviate inflammation and used as a herbal tea (from root and flower) (Said et al. 2002; Modaressi et al. 2009). The number of plants of this genus is also used for traditional and folk medicine for treating a number of ailments are described briefly in Table 1. In India genus Eremostachys superba Royle ex Benth is used to restore mulching by mixing it with cattle feed and fed to goats, cows, and buffaloes etc., which stop yielding milk (Khan et al. 2020; Hariri et al. 2021).

Table 1. Traditional uses of some species of genus Eremostachys

Pharmacological Importance: Genus Eremostachys is one of the important plants, which are known for their diversified medicinal and pharmacological applications (Table 2). Few plants of this species are widely studied viz. E. laciniata, E. loasifolia, E. macrophylla, E. glabra, E. laevigata, E. azerbaijanica, E. labiosa, E. labiosiformis, E. pulvinaris etc. However; most of the species are still need to be explored with respect to their pharmacological applications and secondary metabolites.

Table 2. Secondary metabolites and Pharmacological Uses of some species of genus Eremostachys

Table 2(ii).Secondary metabolites and Pharmacological Uses of some species of genus Eremostachys

Table 2(iii). Secondary metabolites and Pharmacological Uses of some species of genus Eremostachys

Chemical structure of Secondary metabolites: Numerous secondary metabolites were identified from the genus Eremostachys. Sterols, essential oils, linear hydrocarbons, iridoid glucosides, flavonoids, isoflavonoids, terpenoids, and their derivatives, acid derivatives and phenylethanoid glycosides etc. are found in a majority. Most of them are represented and specifies by their core structures as follows:

Table 2(iii):Secondary metabolites and Pharmacological Uses of some species of genus Eremostachys

Table 2(iv):Secondary metabolites and Pharmacological Uses of some species of genus Eremostachys 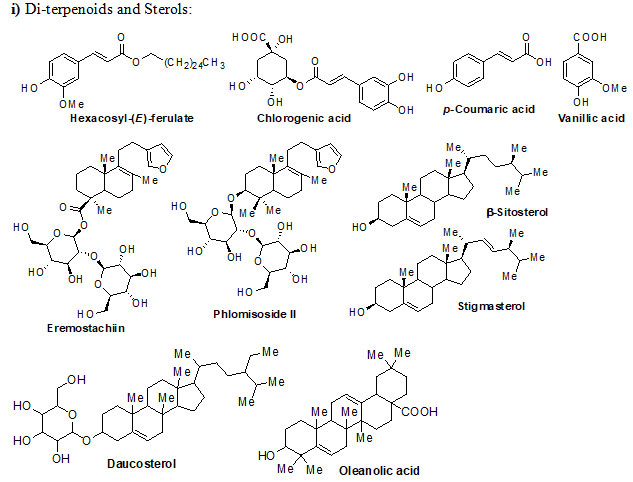 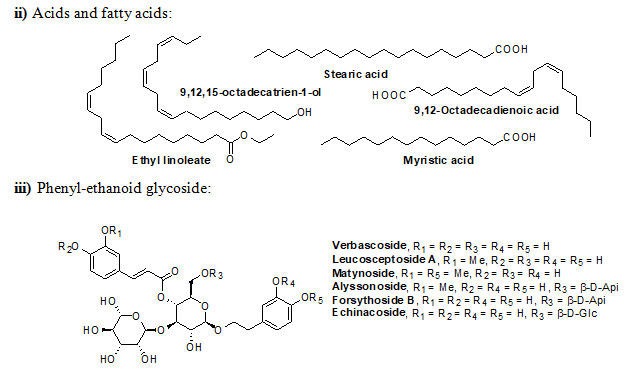 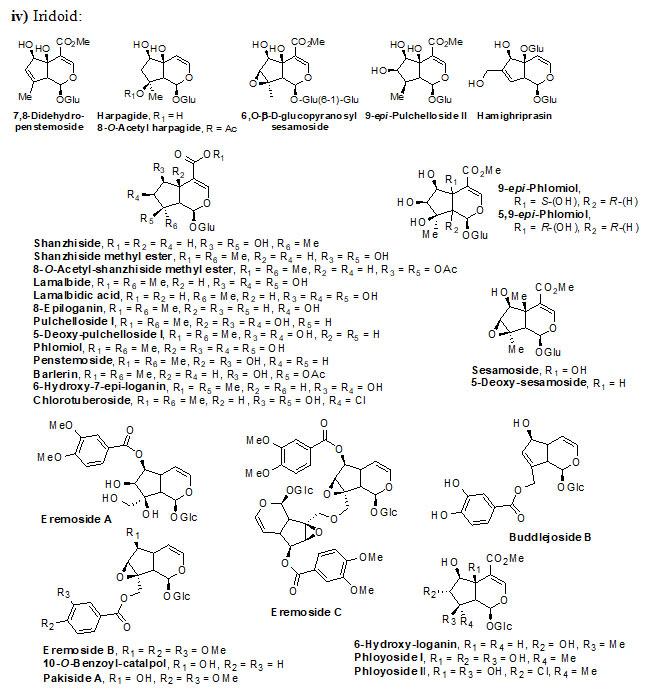 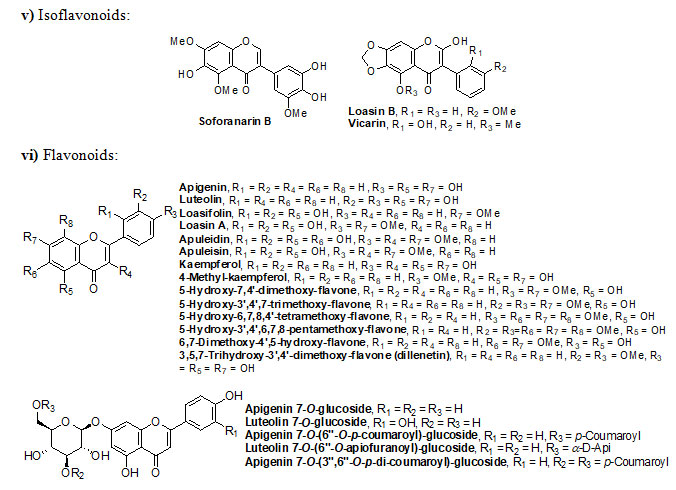 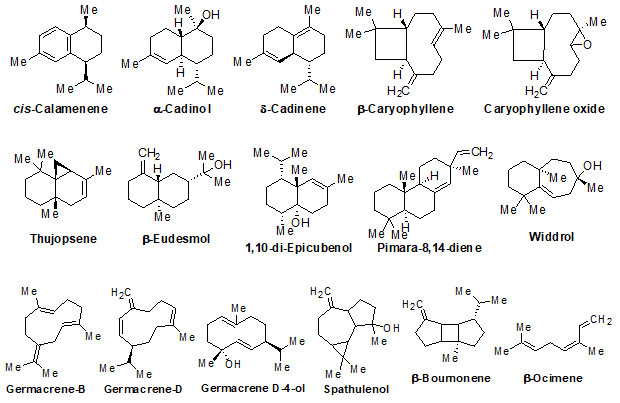 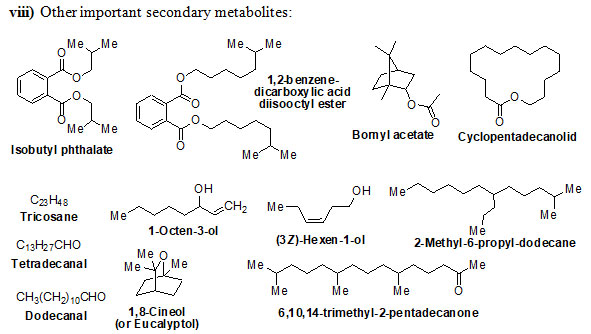 The findings of the present study has shown that the genus Eremostachys is very important with proven medicinal impacts due to the presence of numerous secondary metabolites and their known biological applications viz. antibacterial, anti-inflammatory, antioxidant, painkilling, antirheumatic, anti-poisonous. Further, it can be a potential agent towards antimalarial, anti-Parkinson’s and anticancer etc. as few reports are based on such studies. Therefore, in this review, the important secondary metabolites extracted from the genus Eremostachys viz., flavonoids, isoflavonoids, iridoid glucosides (chemotaxonomic markers), phenyl-ethanoid glycoside, acids, hydrocarbons, essential oils, terpenes, diterpenoids and sterols etc. are summarized along with chemical structure.

The traditional uses and pharmacological applications of this genus Eremostachys reported in the literature are compiled in tabular form. Unfortunately, only a few species (viz. E. laciniata, E. azerbaijanica, E. glabra, and E. macrophylla) have been majorly studied so far, however; most of the species of this genus are still need to be explored. The genus Eremostachys superba Royle ex Benth is an only endangered species in India, having an ornamental value as very few studies on their medicinal properties are reported in literature.

Conflicts of Interests: Authors declare no conflicts of interests to disclose.

Duthie JF, (1915). Flora of the upper gangetic plain and of the adjacent Siwalik and sub-Himalayan tracks. Reprinted (ed.) Singh B, and Singh MP. Dehradun, India, 1903-29.

Pant S and Pant VS, (2011). Status and conservation management strategies for threatened plants of Jammu and Kashmir, J Phytology, Vol. 3(7): 50-56.