The most effective host insect is the wax moth (Galleria mellonela L.), which resulted in 195 adults, compared to 98 of the mill moth (Ephestia kuhniella Zell.). The gabrobragon population introduced into the apple tree cenosis continued its reproduction in natural conditions and largely suppressed the number and harmfulness of the codling moth. The RAPD analysis of the Krasnodar and Stavropol populations of Habrobracon hebetor Say revealed a high level of DNA polymorphism and genetic diversity in the studied geographic populations of the gabrobragon. At the same time, intrapopulation variability was 87.1%, while interpopulation variability accounted for 12.9% of the total indicator. The limited gene flow (Nm = 3.298) results in relatively low identity (GI = 0.906) between populations and significant interpopulation variability. This indicates that the analyzed insect samples probably represent different geographic populations of the H. hebetor ectoparasite.

H. hebetor is a small insect from the order Hymenoptera of the Braconidae family. A female finds a caterpillar, paralyzes it, and then lays her eggs on the caterpillar’s body. The number of eggs laid per caterpillar can reach 45, while the gabrobragon larva, while developing, feeds on the hemolymph of the caterpillar, of which only the outer covers remain  (Kovalenkov et al. 1995; Chouinard et al. 2019).

The duration of development of one generation of the gabrobragon is 9–14 days. Natural bragon is present in all stations; during the growing season it migrates from one to another (Jumaev et al. 2017; Chouinard et al. 2019). Natural populations of the gabrobragon are able to reduce the number of caterpillars of the corn moth to 22%, garden moth – up to 35%, cotton moth – up to 45%, and gamma moths – up to 30% (Kovalenkov et al. 1995). For many years, the entomophage has been the object of mass breeding and use against a number of harmful lepidoptera species. The biological efficacy of a gabrobragon propagated in artificial conditions at low release rates (1-3 thousand individuals / ha) against a corn moth, cotton moth, acacia moth reaches 70-90% (Kovalenkov et al. 1995; Agasieva et al. 2019).

It is used in the open field for biological protection of tomato, corn, soybeans, cotton, sunflower, apple against cotton moth (Helicoverpa armigera Hb.), corn stalk moth (Ostrinia nubilalis Hbn.), acacia moth (Cyella zinckenella Fr.), codling moth (Cydia pomonella L.) Average daily temperature in the range of 25-30°C, the lifespan of the imago of at least 15 days, and the relative humidity of 70-80% are optimal for the parasitic activity of the gabrobragon. However, a number of researchers noted that the trophic relationships of H. hebetor vary significantly, both in laboratory and in the field (Frolov 2014; Amarasekarea et al. 2016; Piekarska-Boniecka et al. 2019).

Thus, it is artificially divided into pyralid, moth, leaf-roller and other races. In all likelihood, as a result of microevolutionary processes, many biological parameters of this species have changed, such as food specialization, stationary distribution, migration abilities, and morphogenetic structure of populations, which may complicate its application in biological plant protection programs. In this regard, the study of the biological characteristics of H. hebetor will make it possible to identify the reasons for the variability of the structure of gabrobragon populations and the prospects for its further use for biological control of a number of harmful Lepidoptera (Chouinard et al. 2019).

The aim of the present  work is to assess the parasitic activity of the gabrobragon as a regulator of the codling moth abundance in various geographic populations, to select a host insect for its mass breeding in laboratory conditions, and to assess the molecular genetic variability of the structure of H. hebetor Say populations.

The capture of natural populations of the gabrobragon H hebetor was carried out in apple orchards in Krasnodar Krai and Stavropol Krai of Russia using cassettes in which caterpillars of the codling moth were placed. Mass breeding of gabrobragon for biological control of the codling moth was carried out using the wax moth (Galleria mellonela L.) as a host insect of middle-aged caterpillars. In clean glass jars with a capacity of 1 liter, we put 100 g of artificial nutrient medium (modification A) and 7-10 cocoons of galleria (before the butterflies leave them). The jars are covered with glass lids and placed in a dark thermostat with a temperature of 28-30 oC and an air humidity of 70-75%.

The emerged butterflies laid eggs directly on the medium, from which in 12-15 days caterpillars hatched, which immediately penetrated into the medium. In jars, caterpillars developed up to the 3rd age. Then the contents of the jars were divided into two portions, which were placed in new 1 liter jars, previously filled with a medium with a layer of 6-7 cm. This amount of medium was sufficient until the caterpillars were fully grown. Then galleria caterpillars of older ages, 100-400 ind. were placed in glass jars with a capacity of 1-3 liters with corrugated paper and infected with gabrobragon.

In each jar, 30-50 females of the parasite were introduced, which paralyzed the caterpillars and laiid eggs on them. After 10-14 days adults flown out, which were packaged in plastic containers or glass jars and released into apple orchards during the appearance of middle-aged codling moth caterpillars at the rate of 1-2 thousand ind. per 1 hectare. Efficacy assessment of the bioagent was carried out using cassettes with caterpillars of the codling moth and trapping belts placed in the experimental garden and control plots of the garden.

Figure 1: Cassettes with codling moth caterpillars for catching gabrobragon in an apple orchard. 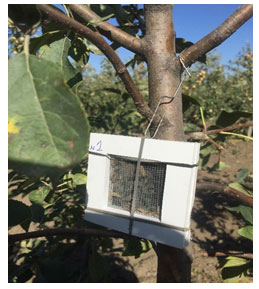 Statistical data processing was performed using the Statistica 13.0 software package with the Duncan’s test. The studies were carried out on the basis of the laboratory of the State Collection of Entomoacariphages and the primary assessment of biological plant protection products of the Federal Research Center of Biological Plant Protection (FRCBPP), Russia, Krasnodar.

One of the promising entomophages capable of controlling the abundance of the codling moth is the gabrobragon H. hebetor. In (2019) and (2020), in the apple orchards of the FRCBPP (Krasnodar Krai) and in the SSPK Sady Stavropolya (Stavropol Krai), natural starting populations of the gabrobragon H. hebetor were caught on bait cassettes with older caterpillars of the codling moth. Local ecotypes were of practical value, which were captured in order to clarify their bioecological features and the possibility of practical application to protect the apple tree from the codling moth.

Biological features and morphological signs of gabrobragon: ectoparasite wintering occured in a state of diapause at the imago stage. The flown out of the gabrobragon occured not earlier than April when the temperature was about + 15°C. The entomophage feeds on nectar and pollen from flowering plants, for example, weeds (wild radish, dandelion, shepherd’s purse, etc.), were accumulated in fruit gardens and vineyards (Agasieva et al. 2019; Piekarska-Boniecka et al. 2019).

After feeding, mating and searching for target host species that may appeared on crops took place. On sunny, windless days at a temperature of + 25 … + 30°C, the maximum searching and parasitic activity of the ectoparasite was noted. The males of the gabrobragon were polygamous, the females were monogamous. The search for an insect host for laying eggs was based on the orientation of females to odors produced by the host’s fodder plant, as well as by the caterpillars themselves and their metabolic products.

While attracting the parasite, the combination of various plants and phytophagous insects – objects of infection by the gabrobragon – played a huge role. Under the laboratory conditions, a host insect and optimal conditions for its mass reproduction, storage and maintenance were selected. Caterpillars of the wax moth (G. mellonella) and caterpillars of the mill moth (E. kuhniella) were tested as host insects. The effectiveness of each species was determined by the number of paralyzed caterpillars and the emergence of parasites of the filial generation (Table 1) (Chouinard et al. 2019).

Table 1. The number of gabrobragon emerged depending on the host insect

As the data presented in (Table 6) show, the most effective host insect was the wax moth (G. mellonela), in the variant with which the yield of adults was 195 individuals, in comparison with 98 on the mill moth (E. kuhniella).

The timing of the release of entomophages and the developmental phases of the target insect were of paramount importance, especially for obtaining the maximum effect from the use of parasitic Hymenoptera. In this connection, in laboratory conditions, an assessment of the parasitic activity of the gabrobragon was carried out, depending on the age structure of the caterpillars of the codling moth (Table 2) (Chouinard et al. 2019).

As the data presented in (Table 2) show, gabrobragon effectively paralyzed the caterpillars of the codling moth of middle and older ages (caught in Krasnodar Krai), the emergence of parasites of which was 54.8 and 78.6%, respectively. The Stavropol population was not very effective against caterpillars of the codling moth of middle and young ages. Thus, it was found that the new moth population of the gabrobragon, propagated under laboratory conditions, met all the requirements for assessment as a bioagent for regulating the abundance of the codling moth (Chouinard et al. 2019).

In an organic apple orchard at the Shcherbakov farm, gabrobragons were released on the autumn ripening varieties Liberty and Florin. Studies on the use of H. hebetor were carried out over two years (2019) and (2020). Reproducing under natural conditions, the ectoparasite, upon reaching a sufficient population density, significantly regulated the number of the pest. As a result of the experiment, we observed the uniform dispersal of the gabrobragon over the entire garden area. The evidence was the infestation of caterpillars in cassettes installed in the apple orchard. The damage degree by gabrobracons of pest caterpillars was 50-65%, fruit damage was 3.5% (Chouinard et al. 2019; Agasieva et al. 2019).

During the growing season, cardboard trapping belts were installed on apple tree boles to record the dynamics of the pest abundance and the damage of caterpillars by the hymenopteran parasites. As a result of regular (weekly) observations, caterpillars of the codling moth infected with gabrobragon and empty cocoons of the parasite that flew out were revealed. The general parasitism of the pest caterpillars in the trapping belts reached 60-70% (Figure 2).Thus, the gabrobragon population introduced into the apple tree cenosis continued its reproduction in natural conditions and largely suppressed the number and harmfulness of the codling moth (Chouinard et al. 2019).

Figure 2. 1: A trapping belt installed on an apple tree; 2 – gabrobragon cocoons, after the parasite leaves them. 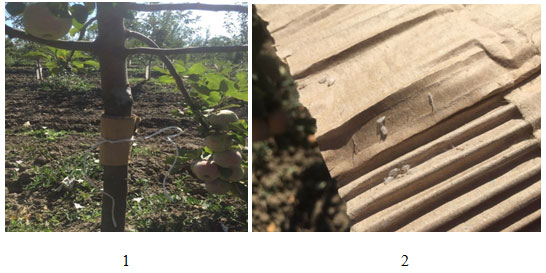 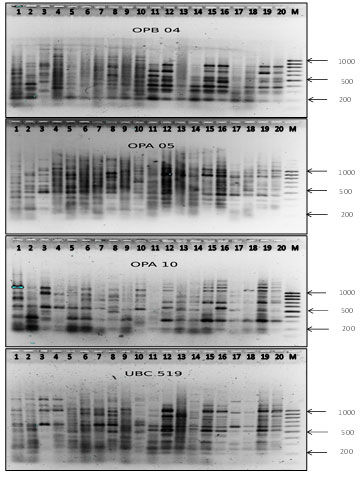 Table 3. Number of loci per primer and sizes of DNA fragments in RAPD analysis of gabrobragon populations.

Molecular genetic analysis of H. hebetor revealed a high level of DNA polymorphism (P = 80.7-82.3%) and genetic diversity (H = 0.256-0.283) in the studied geographic samples and the absence of significant differences between them in these indicators (table 4)

Genetic diversity (according to Nei) within geographic samples (Hs = 0.270) accounted for 87.1% of the total genetic diversity (Hs = 0.310) (Table 5). The revealed ratio of intra- and inter-population variability, estimated by the Shannon Index (I), showed similar data. The level of genetic flow between populations was Nm = 3.298, and the coefficient of genetic differentiation was Gst = 0.132. The Gst value confirmed the fact that 12.9% of the total genetic variability falls on the share of variability between populations, which determines the differentiation between samples (Agasieva et al. 2019).

Table 6. Genetic distances (GD) (under the diagonal) and genetic identity (GI) (over the diagonal)
between gabrobragon populations (according to Nei, 1978)

This study was financially supported by the Kuban Science Foundation within the framework of the scientific project No. MFI-20.1 / 65.

Dulgerova, VA (1994). Development of technology for breeding gabrobragon. Environmentally friendly and pesticide-free technologies for obtaining crop products In: collection of the materials of the All-Russian scientific and production meeting Pushchino Krasnodar (1).