Avian Diversity Assessment of a Tropical Forest in Central India

Pandharkawada forest division is located in biodiversity rich landscape of Maharashtra, India. 296 birds distributed in different habitats are recorded from this forest division belongs to 19 orders 69 families. From the recorded 296 species, 10 species are near threatened, 2 vulnerable and 1 is endangered (IUCN red data book). 74% species are occurred as common, 17% as uncommon, 5% rare and 14% as very rare. 56% are distributed as resident, 21.28%, are winter visitors 7.50% vagrant, 6.41% are distributed from winter to summer, 6.41% are recorded from monsoon to winter, 4 are monsoon to summer, 2 are monsoon visitor and 1 is summer visitor.

Main food habit of recorded species are insectivores and carnivorous followed by frugivores, granivores, terrestrial grazer, nectarivores, folivores, aquatic grazer, and scavengers. Study of their habitat reveals 56% are arboreal, 22% as shore birds 10% water birds 8% ground birds and 3% as arial birds. Their nesting type is recorded as, 48% as tree nesters, 17% in ground scrap, 12% built nests floating on water 8% in ground, 8% in tree hole and 7% in rock cleft. In a way they directly impacts human health, economy, food production as well as millions of other species. Therefore, it is to know about local bird diversity and its ecology. This study establishes Pandharkawada forest division is rich in avifaunal diversity due to varied habitats like forest, grassy patches, shrubs, perineal waterbodies and seasonal wetlands. Due to this, it attracts varieties of local resident and migratory species and different species, found distributed in different seasons of the year.

Avian population has a central role in ecosystem functioning and ecosystem services. Birds are bio-indicators and appraise the health of environment and ecosystems, they are capable of determining environmental integrity using their functions and populations. Birds play pivotal ecological roles both in forest and farmland ecosystems, notably pollination, seed dispersal, and pest control (Whelan et al. 2008; Mulwa et al. 2012). In addition to above, there is positive role of birds in nutrient cycling and soil formation.

They also richly contribute to the recolonization and restoration of disturbed ecosystem as per (Sekercioglu et al. 2004; Sekercioglu 2006).  A study inferred that, birds are also act as mobile links that transfer energy both within and among ecosystems that are crucial for maintaining ecosystem function and resilience (Lundberg and Moberg 2003). In a way it directly impacts human health, economy, food production as well as millions of other species. Therefore, it is to know about local bird diversity and its ecology (Ndang’ang’a et al. 2013).

In Vidarbha region of Maharashtra 413 species are recorded by various authors. The annotated checklist of Nagpur area represented 284 species of birds. 171species are studied from Pohara-Malkhed reserve Forest, district Amravati (Wadatkar and Kasambe 2002; Kasambe 2009). 135 species of birds are observed in and around Ambazari Lake Nagpur (Kedar 2012). Total 312 species of birds recorded from the nearby area of Navegaon National Park Gondia 76 species of birds are reported from Chaprala wild life sanctuary, Gadchiroli (Paliwal 2013; Chauhan and Dhamani 2014; Wagh and Tiwari 2020).

In this context, the conservation of this ecologically important fauna is paramount and this research exercise of systematic study on bird diversity assessment in different habitat is undertaken from June 2015 to December 2020 to understand and document local diversity, distribution, habit, habitat, nesting type and conservation status of birds of Pandharkawada forest division. This will help in devising practice of conservation.

Pandharkawada forest division, located at south-eastern part of Maharashtra and situated in the geographic coordinates of 78°14′ & 79°13′ East and 19°45′ & 20°20′ North, spread over 655.336 square kilometer. It constitutes a compact patches of dense forest cover, open forest, shrubs and grassy belts and associated having great value from the point of view of wildlife and bio-diversity conservation.

The main portion of forests constitutes the dry Teak bearing forests bearing 60 percent of the total crop composition, so classified as Dry Teak Bearing forests. The bird survey was conducted from June 2015 to December 2020 using standard point count method. Binocular (Nikon 10×40 8.2 0) and camera (Nikon D700, 150-500 Sigma lens) was used for bird watching and to photograph them.

The data collected from the surveys were used to assess habit, habitat, nesting type, occurrence and distribution. Surveys were conducted four days in a week, from sunrise to 4 hours after sunrise and from 4 hours before sunset until sunset. Morning and evening counts were altered between sites. Each of the sites was surveyed daily depending on weather conditions. Birds seen were identified and recorded along the habitat type and status and checklists were prepared.

296 species of birds were studied from Pandharkawada forest division from June 2015 to December 2020. Habit, habitat, nesting type, occurrence, distribution and IUCN status of these recorded species were studied. 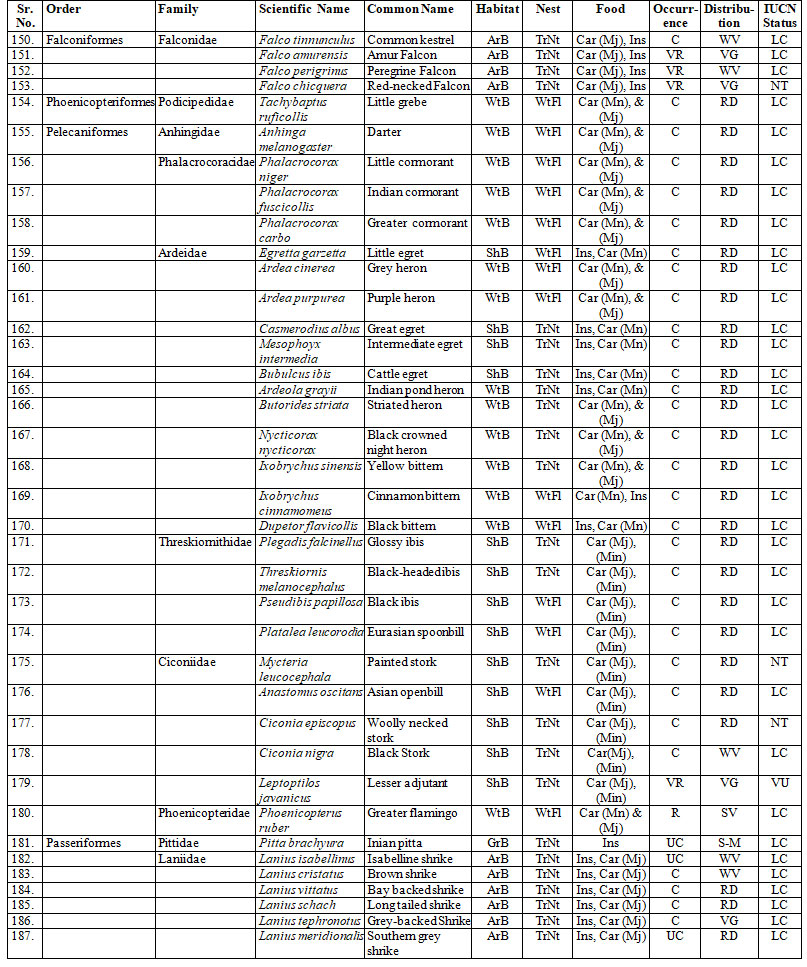 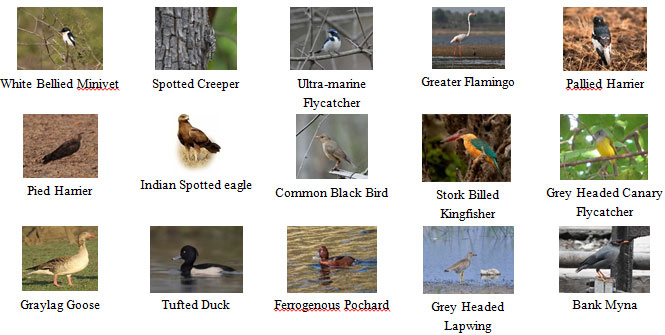 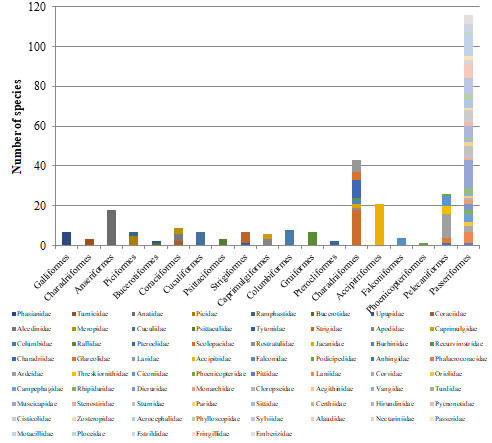 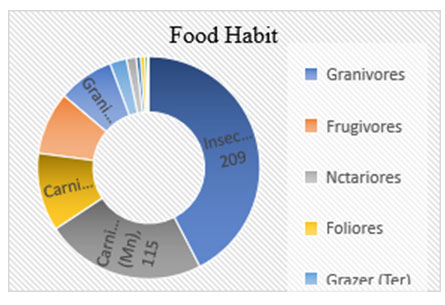 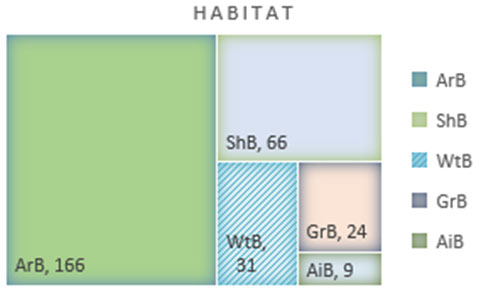 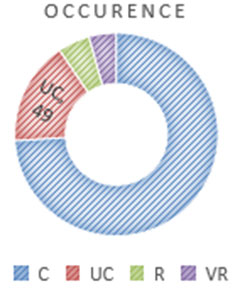 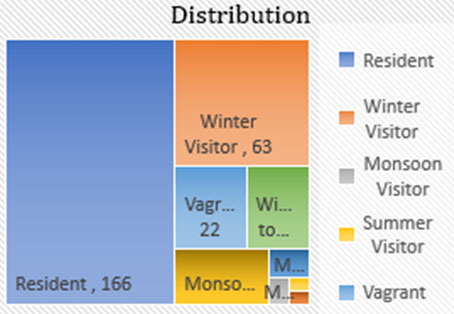 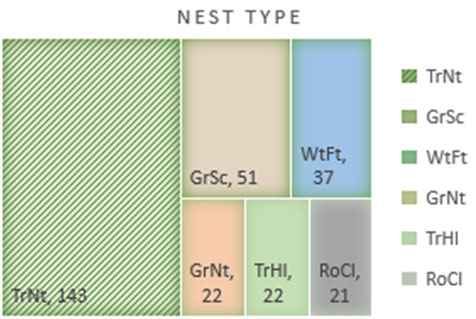 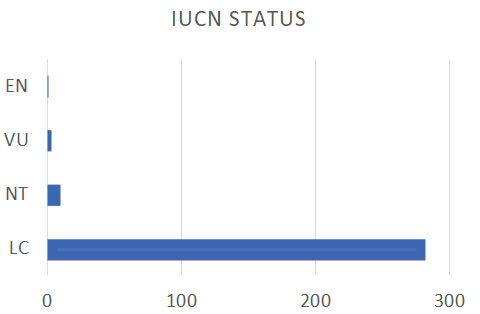 166 (56%) were resident and were found distributed in various habitat (21.28%), 63 were winter visitors and most amongst them were waterbirds, they spent winter at different waterbodies and seasonal wetlands in this division. 22 (7.50%) were Vagrant, 19 (6.41%) were distributed from winter to summer,19 (6.41%) was recorded from monsoon to winter, 4 were monsoon to summer, 2 were monsoon visitor, Greater flamingo was a summer visitor. (fig.5).

The results showed that in comparison to the avian diversity in the adjoining areas, the diversity in Pandharkawada area is significantly better. Major support systems for all kind of flora and fauna in general and birds in particular were forests and waterbodies. Waterbodies and seasonal wetlands were among the most productive ecosystems on the earth and attracts varieties of species of bird. These were under tremendous anthropogenic pressure due to commercial overexploitation and increasing lean period agriculture. Increasing anthropogenic pressure influenced the number of wintering waterbirds, their distribution, foraging behavior and interspecies competition (Chen, et al. 2011; Zhao et al. 2013; Zhou et al. 2010; Alice et al. 2020).

Changes in tropical wetlands led to the change in structure and function of the wetland ecosystems which affect the delivery of important ecosystem services, this loss of ecosystem services impacts human welfare (Alice et al. 2020). After enactment of forest right act 2006, there is tremendous increase in encroachments for individual and community forest rights. More recently, conversion of tropical forests to farmland is a main threat to extinction of bird species from a region, especially intact old-growth forest to agricultural and pastoral lands is among the greatest threats to biodiversity including birds (Gibbs et al. 2010; Tilman et al. 2001; Laurance et al. 2014; Hughes et al.2020; Rurangwa et al. 2021).

The findings of the present study will help in understanding local diversity, distribution, and conservation status of birds in this landscape which will help in drawing sustainable conservation strategies by balancing human demand and ecological services provided by these flying denizens.

Chavhan, P.R. and Dhamani, A. A. (2014) Avian diversity in and around Chaprala wild life sancuary, dist. Gadchiroli, Maharashtra, India. International Journal of Fauna and Biological Studies, 1(6): 90-95.

Kasambe, R. and Sani, T. (2009) Avifauna in and around Nagpur city of Maharashtra: an Annotated contemporary checklist. Newsletter for Birdwatchers 49(3): 35-40.

Wagh, G and Tiwari, P. (2020) On the Diversity and Abundance of Avian Species from Grassland and Wetland Areas of an Industrial Area of Tropical Maharashtra. Bioscience Biotechnology Research Communication, 13(2): 770-780.