Copyright © Aljabaa  This is an open access article distributed under the terms of the Creative Commons Attribution License (CC-BY) https://creativecommns.org/licenses/by/4.0/, which permits unrestricted use distribution and reproduction in any medium, provide the original author and source are credited.

Digital orthodontics is in a new era that is progressing rapidly. The availability of this technology has simplified orthodontic practice by reducing inconsistencies when fabricating dental casts, reducing their storage, and reducing the inconvenience of using impressions. Digital intraoral scanners (IOS) have a variety of applications in the orthodontic clinic (Kravitz et al., 2014). The introduction of 3D scanning in dentistry began with the use of computer-aided design and computer-aided manufacturing (CAD/CAM) by Dr. Francois Duret in 1973 (Duret, 1973; Logozzo et al., 2008). Afterwards, Sirona Dental Systems manufactured a chairside scanning device (CEREC) utilizing CAD/CAM technology (Brandestini and Moermann, 1989; Mormann, 2006).

Although CEREC had its own limitations and seemed imperfect at that time, it was without competitors until the Cadent iTero digital impression system was launched in 2006, introducing full-arch intraoral scanning (Kravitz et al., 2014; Hwang et al., 2020). In 2011, Align Technology purchased Cadent, allowing clinicians to submit 3D scans instead of physical impressions for Invisalign fabrication. Since then, dental companies around the world are focused on producing superior IOS. More than 14 scanners were demonstrated at the 2017 International Dental Show in Cologne (Hwang et al., 2020).

Digital scanning of the dental arch is expected to become routine in the dental clinic, and more progress in the IOS is expected in coming years. The aim of this article is to provide an overview of currently available IOSs for orthodontic use, their advantages and disadvantages over conventional procedures, features of available scanners, and clinical software.

Advantages and applications of 3D scanners in orthodontics: Impression-taking might be an unpleasant experience for patients, which might cause them discomfort and anxiety, especially with a sensitive gag reflex (Kravitz et al., 2014). Alginate and Polyvinyl siloxane (PVS) impressions have been associated with many drawbacks, such as voids, bubbles and improper tray size, temperature sensitivity, limited working time, poor pouring, and improper trimming, as well as model breakages. Studies have shown that full-arch digital scans are as accurate as conventional impressions (Ender and Mehl, 2011).

For patients, it has resulted in a better demonstration of their case and the expected results, while reducing chair time, anxiety, and discomfort (Kravitz et al., 2014). Depending on the device, software, and the clinician, IOS can be used for a variety of applications in orthodontics. Usage includes treatment planning (Rheude et al., 2005), indirect bonding (Wiechmann et al., 2003), customized lingual brackets (Wiechmann et al., 2003), clear aligner fabrication (Hilliard, 2006), orthognathic surgery simulation (Gateno et al., 2007; Cousley and Turner, 2014), as well as scoring surgical outcomes in cleft lip and palate patients (Asquith and McIntyre, 2012).

The accuracy of IOS has been investigated in several studies. Although the early version of IOS was not adequate for workflow (Ender and Mehl, 2013), scanning time and accuracy were improved by improving optical technology (Grunheidet al., 2014). Patzel et al. (2014a; 2014b; 2014c) did several studies to verify the accuracies of three to four types of IOS. They found that results in accuracy were comparable and that digital workflow was more time efficient. Other investigators compared the digital with conventional methods, and they found that, even with some local deviation in complete-arch test results, higher precision (range 42.9–82.8 µm; average 50 µm) was achieved with digital scanners than with conventional alginate impressions (162.2 µm) (Mehl et al., 2009; Ender and Mehl, 2013; Ender and Mehl, 2015; Ender et al., 2016 Hwang et al., 2020).

The technical methods of scanners: Scanning performance depends on the technology used in their imaging processors. There are different types of available technologies, but the most common image technologies follow are as:

Confocal laser scanning: The three-dimensional structure is produced by repossessing two-dimensional images at different confocal planes. A filter with a tiny pinhole produces the laser. Only the area within the conofocal plane is captured. This imaging technology is used by TRIOS and iTero (van der Meer et al., 2012; Wong et al., 2017).

Triangulation technique: The Pythagorean theorem is used in this technique to calculate distance and angulation. It is composed of three points: laser emitter, object surface, and sensor. This technique is used by the CEREC system. To produce more details, this technique requires using a radiopaque powder that contains titanium oxide (e.g., Optispray by CEREC) (Logozzo et al., 2008).

3D in-motion video recording: This technology uses high-definition video with three small cameras (trinocular imaging) to capture three precise images of the tooth. A unique characteristic of this technique is the high data redundancy, in addition to high accuracy. This method requires a thin layer of powder to serve as a connector for location references. This technique is used by 3M’s Lava C.O.S. and True Definition (Syrek et al., 2010; Kravitz et al., 2014).

Most popular IOS products: Below, I will discuss different types of commercially available scanners, their clinical performance, and their popularity.

iTero scanner by Align Technology: In 2007, Cadent LTD introduced the iTero digital scanner. Later, in 2013, Align Technology restructured and introduced its iTero scanner to the market. The technical method used in this scanner is confocal imaging technology with a red-light laser beam (Babayoff and Glaser-Inbari, 2004). Since the iTero scanner was associated with Invisalign, it became more popular, especially among Invisalign practitioners. The advantage of the iTero scanner is that it is a powder-free scanner, so it provides operators with a real simulation and progress of Invisalign patients. The scan tip can directly contact the tooth surface. The iTero software uses an open-source standard triangulation language (STL), which makes it compatible with different systems, i.e., Invisalign, Incognito, Sure Smile, etc.

Although the scanner wand is considered bulky compared with other types of scanners, the manufacturer argues that this was done to take a wider view, which in turn will obtain a shorter scanning time and high accuracy. The scan wand has a reflective mirror design, which, according to the company, will make it easier to scan the most distal tooth. Further, to prevent infection, the wand has a disposable sleeve (figure 1).

True definition scanner by 3M ESPE: In 2008, 3M produced Lava C.O.S. using an active wavefront sampling technology. This classic scanner provided good performance at that time. Later, the company improved its specifications and produced the True Definition scanner. In 2016, it launched the Mobile True Definition, which has the same software/hardware as the original. The advantages of this scanner are that it provides a high accuracy and the tip is the size of the hand piece. This type of scanner requires a thin coat of powder for high accuracy. The scanner doesn’t offer real-time full-color scans. The software is an open STL format. The data files are compatible with Incognito, Invisalign customized lingual brackets, Sure Smile, and Clear Correct. Also, the software is designed to work with UnitekTM Treatment Management Portal Digital Model software for treatment planning, such as Bolton and space analysis (figure 2). 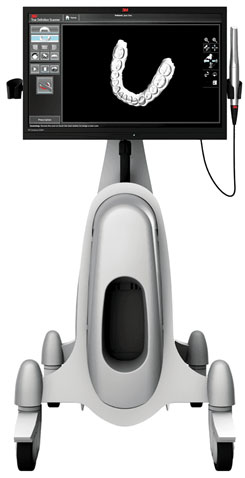 CEREC Omnicam by Sirona Dentsply: The CEREC system gained its popularity by manufacturing CAD/CAM. It has a strong name in restorative dentistry. Its scanning technology is the triangulation imaging method. The scanner provides video streaming instead of static images, and powdering is not required in the scanning procedure. In orthodontics, the system has been advanced by the possibility of producing a full-arch scan (figure 3).

TRIOS 3/TRIOS 3 wireless by 3Shape: In 2010, 3Shape launched the first edition of TRIOS 3. In the beginning, there were a lot of complaints that there was fogging in the wand, but later, the company solved this problem. The system has the advantage that the operator can perform the scanning as soon as it is turned on, since the new scanner tip is preheated. Moreover, the scanner wand is downsized, and the wand sleeve can be sterilized by autoclave.

The scanning technology is the Ultrafast Optical Sectioning, which is based on the conofocal laser principal. The wireless version of this scanner was launched in 2017, offering the operator flexibility and freedom in scanning. The system also has an advanced treatment simulator and a built-in recording feature of dynamic occlusion (figure 4). 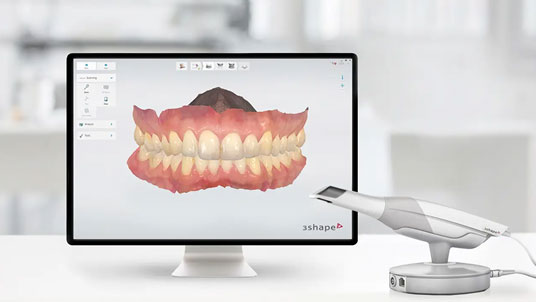 Which one to use?

Suggestion of a specific scanner is not easy, and that is not an aim of this article. A comparison of different features of the popular scanners will be discussed below. One of the most important features in any scanner is the accuracy of the scanning (Goracci et al., 2016). Two factors affect scanner accuracy: the trueness and precision. Trueness means how truly the scanner can replicate the real dimensions, while precision means how reproducible the scanner is (Huang et al., 2020).

Though many previous studies suggested that iTero and True Definition have higher accuracy than TRIOS and Omnicam (Ryakhovskiy and Kostyukova, 2016; Amin et al., 2017; Renne et al., 2017), accuracy comparison between iTero and True Definition was not studied. Scanning accuracy is affected by the material being scanned (Nedelcu and Persson, 2014). Powdering improves the scan accuracy. In vitro study revealed that lingual brackets are less accurate than buccal ones, though TRIOS and iTero produced accurate scans under these circumstances (Park et al., 2016 Marghalani et al. 2018; Nedelcu et al., 2018).

Scanning time is also important. Kim et al. (2016) found that iTero may have a longer scanning time than the traditional impression method, but as the clinician’s experience increases, the time decreases. Moreover, they reported that TRIOS takes a shorter time than the traditional impression and that it is suitable for clinicians with less experience with scanners (Kim et al., 2016). Finally, the machine prices: the IOS prices range from $36,000 (USD) to $90,000 (USD). The price depends on the company, the machine, the software, and annual fees. Investing in IOS is an important step that needs critical thinking. It’s a good idea to ask a colleague who has had experience with scanners before buying. Also, ask about the company you are buying from—its reputation, as well as the after-sales service and maintenance.

Digital dentistry is the future since it provides efficiency and effectiveness for both the clinician and the patient. A number of different intraoral scanners are available on the market. The clinician should be aware of the available device features, maintenance, prices, and advantages.

Conflict of Interest: Author has no conflict of interest

Babayoff, N. and Glaser-Inbari, I. (2004). Imaging a three-dimensional structure by confocal focussing an array of light beams. US Patent, International Patent.

Brandestini, M. and Moermann, W.H. (1989). Method and apparatus for the three-dimensional registration and display of prepared teeth. Google Patents.

Ender, A. and Mehl, A. (2015). In-vitro evaluation of the accuracy of conventional and digital methods of obtaining full-arch dental impressions. Quintessence Int, 46: 9–17.